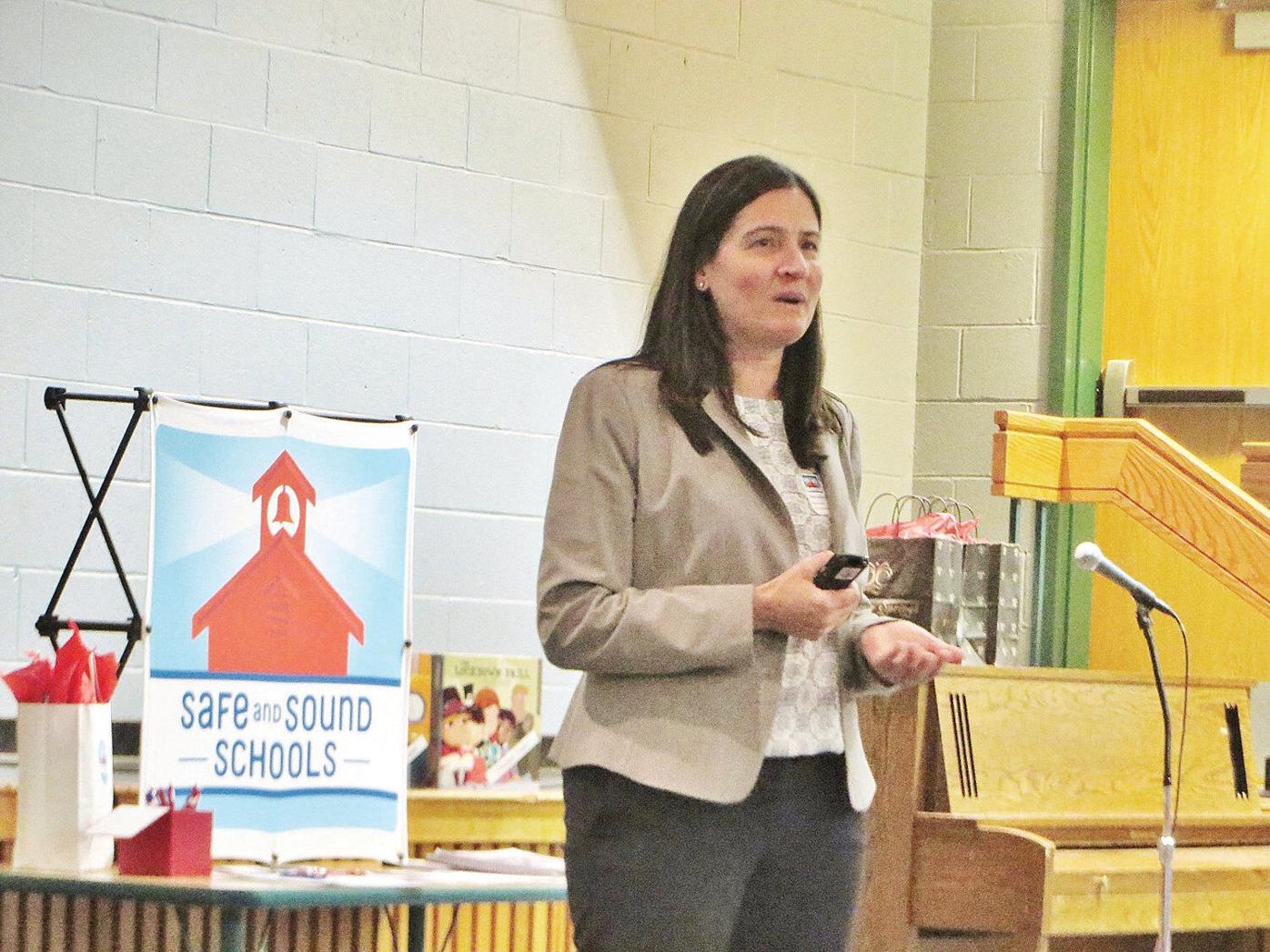 Natalie Hammond was a lead teacher who survived multiple gunshot injuries during the Dec. 14, 2012, shooting at Sandy Hook Elementary School in Newtown, Conn. She spoke about resilience in the aftermath of the shootings, during the Safe and Sound Schools presentation Wednesday at Lee Middle and High School. 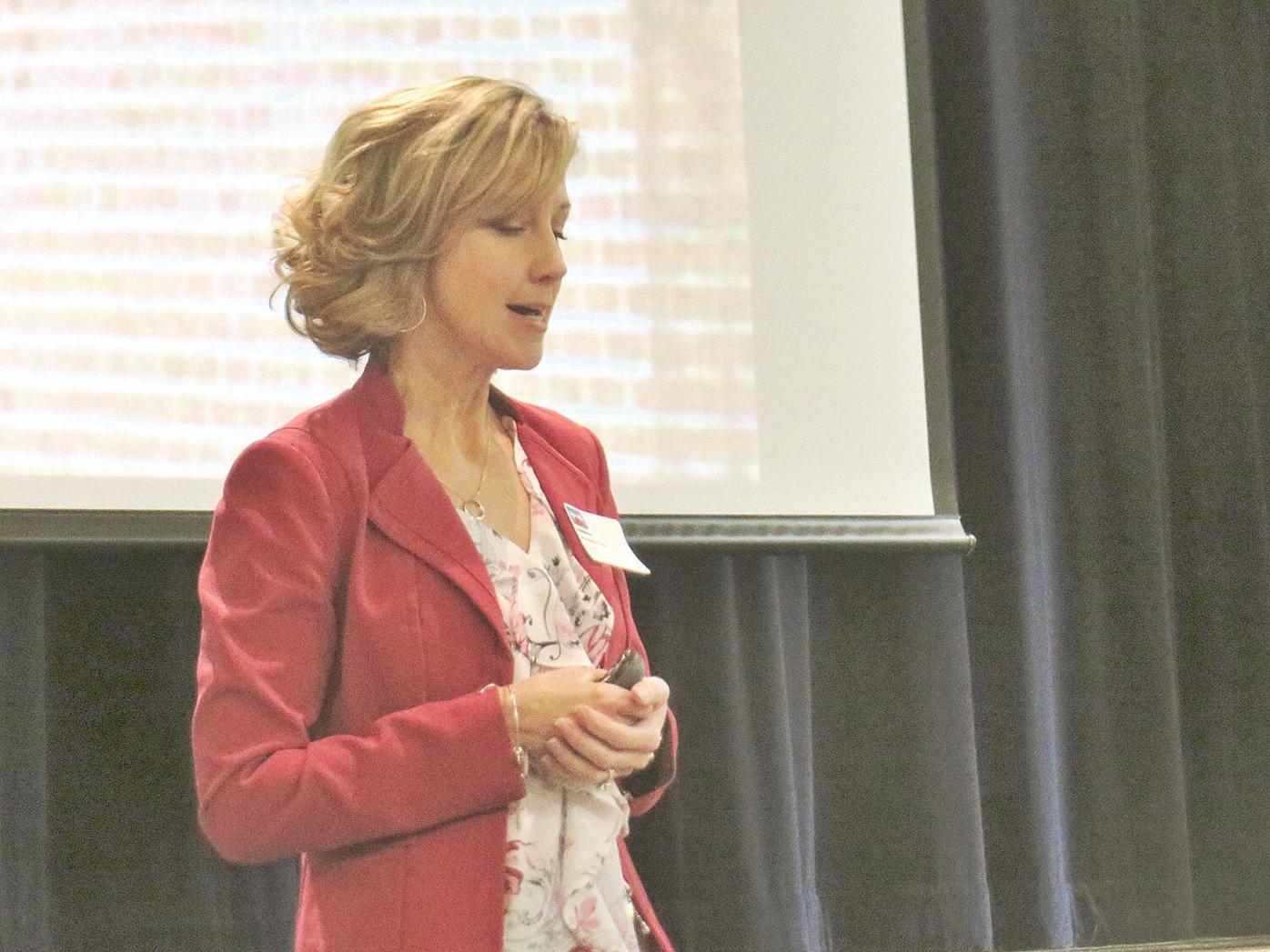 Michele Gay reflects Wednesday on the life of her 7-year-old daughter, Josephine "Joey" Grace Gay, who was among the 20 children killed during the Dec. 14, 2012, shooting at Sandy Hook Elementary School in Newtown, Conn. Gay, the executive director and co-founder of the Safe and Sound Schools initiative, was among those attending the presentation at Lee Middle and High School.

Natalie Hammond was a lead teacher who survived multiple gunshot injuries during the Dec. 14, 2012, shooting at Sandy Hook Elementary School in Newtown, Conn. She spoke about resilience in the aftermath of the shootings, during the Safe and Sound Schools presentation Wednesday at Lee Middle and High School.

Michele Gay reflects Wednesday on the life of her 7-year-old daughter, Josephine "Joey" Grace Gay, who was among the 20 children killed during the Dec. 14, 2012, shooting at Sandy Hook Elementary School in Newtown, Conn. Gay, the executive director and co-founder of the Safe and Sound Schools initiative, was among those attending the presentation at Lee Middle and High School.

Editor's note: This article has been amended from its original version to correct the timeframe of events.

LEE — For alumni of two New England school campuses, Dec. 14 is a day that never will be forgotten.

Nearly 26 years after the first tragedy, dozens upon dozens of people involved in those mass shootings still carry deep psychological wounds, with several of them also carrying physical scars from bullet wounds they were lucky enough to survive.

The students, teachers, first responders, families and others who have been affected directly or indirectly by a school shooting are a part of what Sandy Hook survivor Natalie Hammond calls a growing club nobody wants to belong to.

"I hope you never experience a day like the day we experienced," Michele Gay told about 75 people gathered in the Hank Zukowski Auditorium at Lee Middle and High School on Wednesday night for a Safe and Sound Schools presentation.

She lost her 7-year-old daughter, Josephine Grace Gay — she affectionately was known as "Joey" — during the attack at Sandy Hook.

But communities can do everything in their power to prevent and prepare for such a day, Gay and her co-presenters said.

After the loss of their children, Gay and Alissa Parker, whose 6-year-old daughter, Emilie Parker, also was killed, co-founded Safe and Sound Schools as a national resource for school safety. Gay serves as executive director of the organization, which has a network of about 20 people who can speak on various aspects of school safety, as three did in Lee on Wednesday night.

Over the course of three hours, the forum, presented by the Southern Berkshire Educational Future collaborative of the four South County public school districts, included intensive presentations from three presenters' perspectives. These schools are working across the county with other districts to constantly revise and update their safety and emergency response protocols, event organizers said.

None of the speakers mentioned the shooter's name, despite headlines this week about the Connecticut Supreme Court releasing new documents from the case. The speakers explained to the audience that they refuse to give him the notoriety that perpetrators tend to seek. Instead, they repeated the names and gave personal anecdotes about the victims and survivors, people who all loved the school they went to.

Dan Jewiss, who worked on the Sandy Hook case as a senior Connecticut police detective, began by offering safety strategies from a law enforcement perspective. He detailed the timeline of responses to the first report of a shooting at the school and stressed how clear, concise incident reporting can "shave seconds to save lives."

At the top of his talk, he asked audience members to hold a moment of silence for the Sandy Hook victims. It totaled 1 minute, 50 seconds, making some audience members squirm. But, Jewiss later explained, that was the time it took for various calls to be transferred between multiple dispatchers during the shooting, which caused irreversible destruction in a matter of minutes.

Jewiss made a case for more dispatcher training and for the public to be trained to tell dispatchers specifically where in the building an intruder is or is heading so that police can plan a better targeted response.

Natalie Hammond, a former Sandy Hook lead teacher who survived multiple injuries from the shooting, offered her take on how to build strength and resilience in schools through curriculum and relationships. Instead of recalling the horrors of Dec. 14, 2012, she focuses on the beauty of Dec. 14, 2000, her daughter's birthdate.

After the shooting, Hammond continued her studies to become an elementary school principal, a role she takes pride in at her new district. She focuses on greeting and getting to know everyone who walks through the door because, "We as educators need to be making sure to build relationships in our community."

She also keeps in regular communication about safety plans with local police and fire departments.

"We need to be reinforcing the [school] building both physically and emotionally."

"It's part of our healing process to let our hindsight be your foresight," Gay told the group.

Gay said the resilience and advocacy of Sandy Hook families came from relationships established before the shooting. One of her last memories of Josephine, a smiling "girly-girl" with special needs, is of the girl bounding into the school with a teacher who came to the door to greet her. They had gingerbread houses to build and songs to sing as the whole school prepared for the winter holidays.

"The presence of danger, tragedy and mental illness lives in all of our communities," Gay said, as does the "pillars of faith, family and friendships" to fall back on for support.