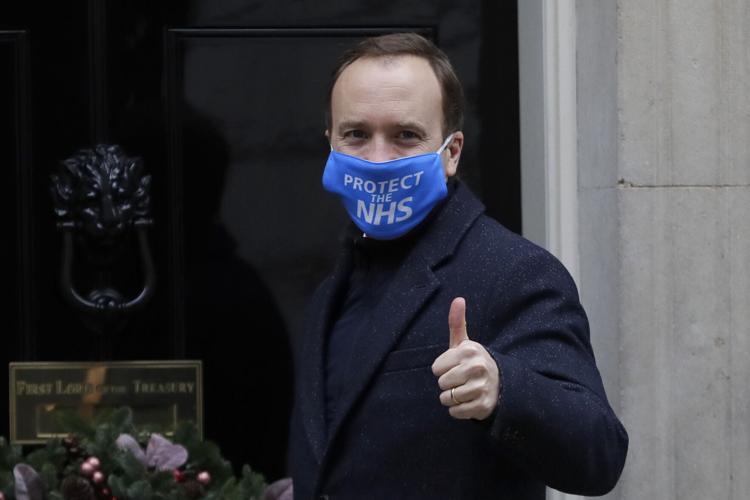 Britain’s Health Secretary Matt Hancock arrives at Downing Street in London on Wednesday. Hancock thanked scientists from Pfizer and BioNTech after the approval of their COVID-19 vaccine for emergency use by the country’s drugs regulator. 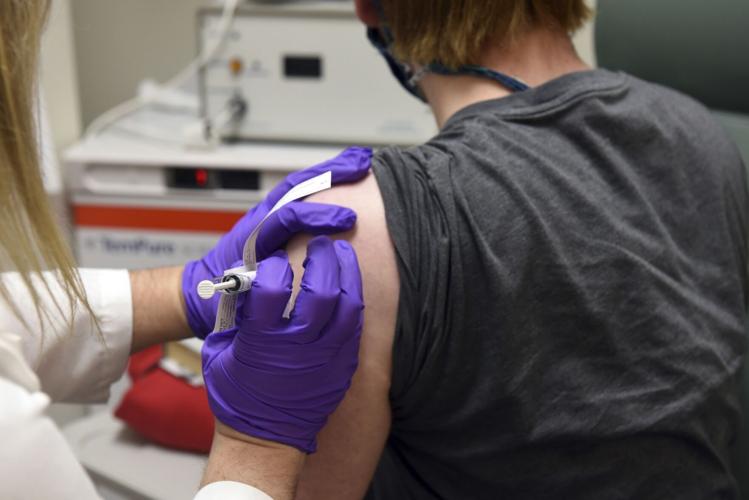 A patient is given the coronavirus vaccine in May, as part of Pfizer’s vaccine clinical trial at the University of Maryland School of Medicine in Baltimore. Now that vaccine approval appears imminent, the question becomes: Will people take it voluntarily? 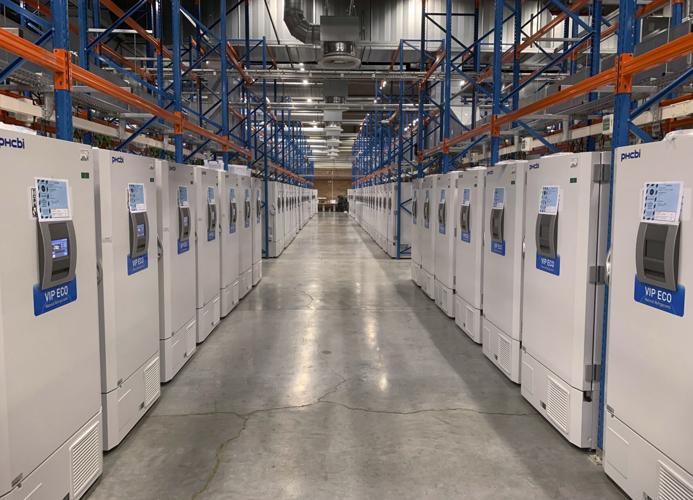 This handout photo taken in Oct. 2020 and provided by Pfizer shows part of a “freezer farm,” a football field-sized facility for storing finished COVID-19 vaccines, in Puurs, Belgium.

Britain’s Health Secretary Matt Hancock arrives at Downing Street in London on Wednesday. Hancock thanked scientists from Pfizer and BioNTech after the approval of their COVID-19 vaccine for emergency use by the country’s drugs regulator.

A patient is given the coronavirus vaccine in May, as part of Pfizer’s vaccine clinical trial at the University of Maryland School of Medicine in Baltimore. Now that vaccine approval appears imminent, the question becomes: Will people take it voluntarily?

This handout photo taken in Oct. 2020 and provided by Pfizer shows part of a “freezer farm,” a football field-sized facility for storing finished COVID-19 vaccines, in Puurs, Belgium.

Britain became the first country in the world to authorize a rigorously tested COVID-19 vaccine Wednesday and could be dispensing shots within days — a historic step toward eventually ending the outbreak that has killed more than 1.4 million people around the globe.

In giving the go-ahead for emergency use of the vaccine developed by American drugmaker Pfizer and Germany’s BioNTech, Britain vaulted past the United States by at least a week. The U.S. Food and Drug Administration is not scheduled to consider the vaccine until Dec. 10.

“This is a day to remember, frankly, in a year to forget,” British Health Secretary Matt Hancock said.

The announcement sets the stage for the biggest vaccination campaign in British history and came just ahead of what experts are warning will be a long, dark winter, with the coronavirus surging to epic levels in recent weeks in the U.S. and Europe.

Officials cautioned that several tough months still lie ahead even in Britain, given the monumental task of inoculating large swaths of the population. Because of the limited initial supply, the first shots will be reserved for those most in danger, namely nursing home patients, the elderly and health care workers.

Britain’s Medicines and Healthcare Products Regulatory Agency recommended the vaccine after clinical trials involving tens of thousands of volunteers showed it was 95% effective and turned up no serious side effects. The vaccine is still considered experimental while final testing is done.

“This is an unprecedented piece of science,” given that the vaccine was authorized less than a year after the virus was discovered, said David Harper, senior consulting fellow in global health at the Chatham House think tank.

Prime Minister Boris Johnson declared that the “searchlights of science” had picked out the “invisible enemy,” which has been blamed for close to 60,000 deaths in Britain. He said that in developing the vaccine, scientists had performed “biological jujitsu” by turning the virus on itself.

Other countries aren’t far behind: Regulators not only in the U.S. but in the European Union and Canada also are vetting the Pfizer vaccine along with a shot made by Moderna. British and Canadian regulators are also considering a vaccine made by AstraZeneca and Oxford University.

Amid growing concern in the U.S. that Americans will greet vaccines with skepticism, U.S. Health and Human Services Secretary Alex Azar said Britain’s decision “should give Americans additional confidence in the quality of such a vaccine.” The virus has killed more than 270,000 in the U.S.

Hancock said Britain will begin receiving the first shipment of 800,000 doses from Belgium within days, and people will start getting the shots as soon as it arrives. Two doses three weeks apart are required. The country expects to receive millions of doses by the end of this year, Hancock said, though the exact number will depend on how fast it can be manufactured and checked for quality.

BioNTech, which owns the vaccine, said it has so far signed deals to supply 570 million doses worldwide in 2021, with options to deliver 600 million more. It hopes to supply at least 1.3 billion in 2021.

That is only a fraction of what will be needed as public health officials try to vaccinate much of the world’s population. Experts have said several vaccines will be required to quickly end the pandemic that has infected more than 64 million people globally.

In Britain, the first shots will go to nursing home patients and those who care for them, followed by everyone over 80 and health care workers. From there, the program will be expanded as the supply increases, with the vaccine offered roughly on the basis of age groups, starting with the oldest people.

Amid the burst of optimism, Pfizer CEO Albert Bourla warned governments against any immediate move to relax restrictions and reopen their economies.

“The time that we will have to go back to normality is not far away,” he said. “But it is definitely not now.”

Despite the speed with which they approved the vaccine, and the intense political pressure surrounding the worldwide race to solve the crisis, British regulators insisted “no corners have been cut” during the review process.

The MHRA made its recommendation following a so-called rolling review that allowed it to assess information about the vaccine as it came in, starting back in October.

“The safety of the public will always come first,” said Dr. June Raine, the agency’s chief executive. “And I emphasize again that this recommendation has only been given by the MHRA following the most rigorous scientific assessment of every piece of data.”

Getting that message to the public will be critical if any vaccination program is to be successful. Some people are worried about getting any vaccine, never mind a new one.

“But I think once they understand and see everyone else having it without hesitation, I think you’ll find that people will go and have it,” Jacqueline Roubians, a 76-year-old retired nurse, said at Brixton Market in London. “People are dying of COVID, so you make that decision: Do you want to die or do you want the vaccine?”

In addition to the huge logistical challenges of distributing the vaccines, the Pfizer-BioNTech one must be stored and shipped at ultra-cold temperatures of around minus 70 degrees Celsius (minus 94 degrees Fahrenheit).

Pfizer said that it has developed shipping containers that use dry ice and that GPS-enabled sensors will allow the company to track each shipment and ensure it stays cold.

Every country has different rules for determining when an experimental vaccine is safe and effective enough to use. China and Russia have offered different vaccines to their citizens before they had gone through large-scale, late-stage testing.

Hours after Britain’s announcement, Russian President Vladimir Putin, not to be outdone, ordered the start of a large-scale COVID-19 vaccination campaign by late next week, with doctors and teachers to be first in line to receive the Sputnik V shot, whose name was inspired by the 1957 satellite that was one of Moscow’s proudest technical achievements.

The Russian vaccine won regulatory approval in August but has yet to complete advanced studies of its effectiveness and safety. Health Minister Mikhail Murashko said more than 100,000 people in Russia have been given the shots.

Still to be determined is whether the Pfizer-BioNTech shots prevent people from spreading the virus when they have no symptoms. Another question is how long protection lasts.

The vaccine also has been tested in only a small number of children, none younger than 12, and there’s no information on its effects in pregnant women.