James Levine, the guiding maestro of the Metropolitan Opera for more than 40 years and one of the world’s most influential and admired conductors until allegations of sexual abuse and harassment ended his career, has died at age 77.

Levine, who also served as music director of the Boston Symphony Orchestra and conducted numerous shows at Tanglewood, died March 9 in Palm Springs, Calif., of natural causes, according to a statement released Wednesday by Dr. Len Horovitz, his longtime physician. The cause was not immediately released, nor was it clear why the death had not been announced earlier.

After investigating accounts of sexual improprieties by Levine with younger men stretching over decades, the Met first suspended and then fired him in 2018, a precipitous fall from grace at the age of 74. Levine fought back with a defamation lawsuit.

Before the scandal emerged, Levine was a widely beloved maestro who helped define the Met, the nation’s largest performing arts organization, expanding its repertory and burnishing its world-class orchestra. And his work extended well beyond that company.

For seven years, starting in 2004, he was music director of the Boston Symphony Orchestra, earning high praise during his initial seasons for revitalizing that esteemed ensemble, championing contemporary music and commissioning major works by living composers.

Tanglewood tenureLevine’s tenure with the BSO began with his first appearance at Boston’s Symphony Hall in April 1972.

His Tanglewood debut was on July 30, 1972, in a program of Mozart and Mahler.

Following the announcement of longtime Music Director Seiji Ozawa’s resignation in 2001 after 29 years at the helm, effective in 2002, the BSO designated Levine as its first American-born music director, with a five-year contract effective in the 2004-05 season. During the three-year interim, the management relied on an extensive list of guest conductors.

Levine’s first appearance on the Tanglewood podium as music director was on July 8, 2005, leading the orchestra and the Tanglewood Festival Chorus in Mahler’s monumental Symphony No. 8. 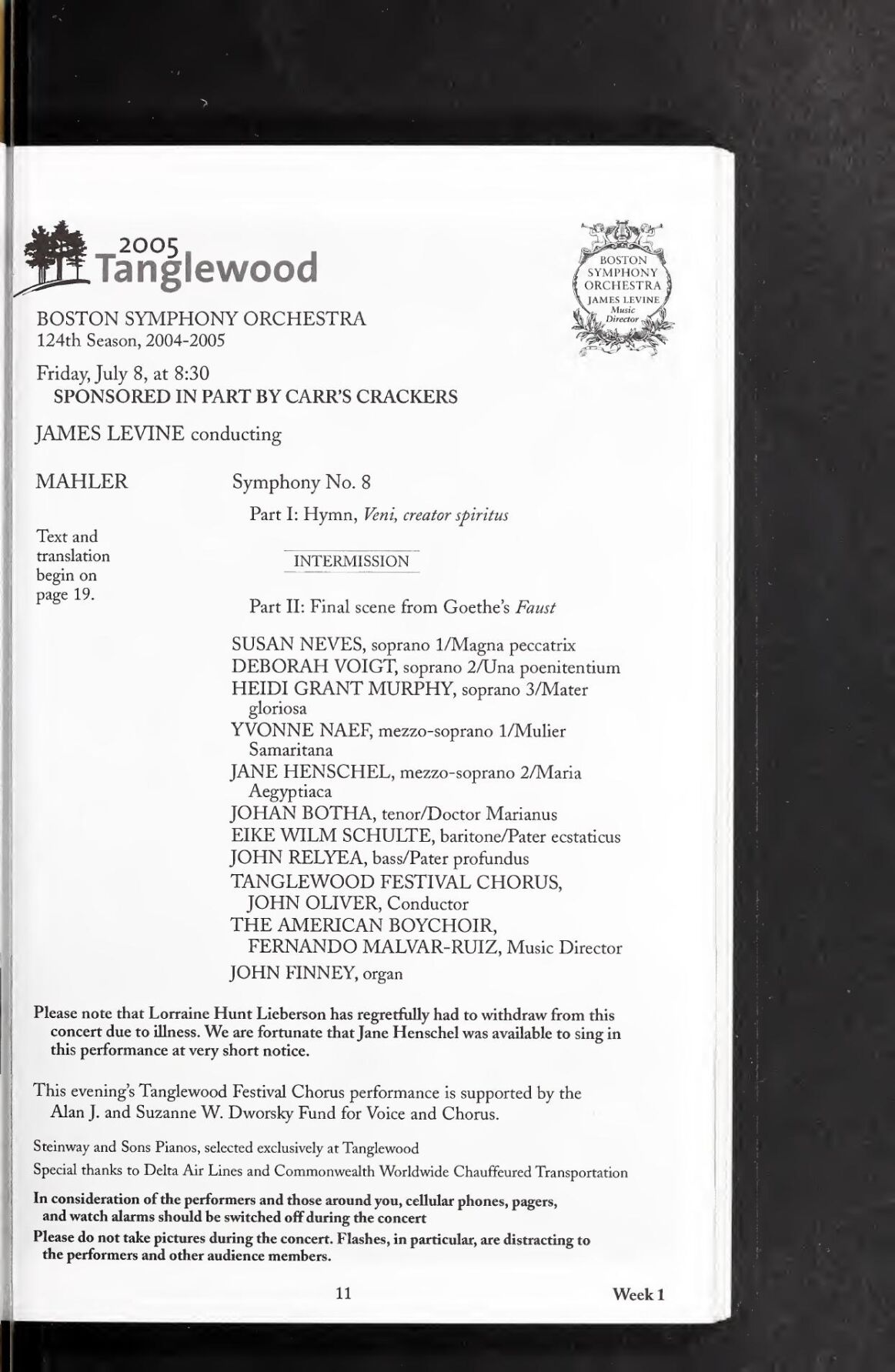 But, given the demands of his role as artistic director of the Met, Levine struggled with time management, in one instance arriving for a Saturday night BSO concert wih moments to spare after leading an opera earlier that day at the Met in Manhattan.

Critics assessed his work with enthusiasm. In an assessment of his first Tanglewood season in 2005, The Eagle’s Andrew L. Pincus wrote that Levine “left no doubt that a new man was in charge. The changes were not radical; a visitor from 1995 would have recognized the place and programs. But there were new wrinkles in programming, the quality of the music-making went up and the whole tone of the festival was more positive.”

Pincus noted that Levine, “seemingly indefatigable despite recurring rumors about his health, brought a jolt of energy both onstage and behind the scenes. Bushy-haired, red-faced and overweight, he is about as unglamorous as a conductor can get. The contrast with the lithe, charismatic Seiji Ozawa was almost shocking.”

But the summer festival audience resisted Levine’s fascination with thorny works by living American composers such as Elliott Carter. An all-American concert attracted only 700 listeners to the 5,000-seat Shed.

Before long, his appearances at Tanglewood were sporadic, as he suffered a series of debilitating illnesses, injuries and surgeries. Levine was highly regarded as a brilliant maestro and a skilled teacher of young musicians studying at the Tanglewood Music Center. The orchestra set up a special $40 million “Artistic Initiative Fund” to support his projects.

And his devotion to the challenging contemporary repertoire and insistence on lengthy rehearsals beyond the normal two and a half hours caused friction with some players and even physical stress. He also chafed at some responsibilities of the music director’s position, such as attending auditions to fill opening in the orchestra.

Levine’s mounting health crises forced many cancellations of rehearsals and performances, particularly at Tanglewood. As a result when his initial contract expired in 2010, he did not sign an extension, continuing his role as music director on an interim basis. In March 2011, the BSO announced his departure as of the close of the Tanglewood season five months later.

He never reappeared on the BSO podium either in Boston or in Tanglewood and after sexual misconduct allegations erupted in 2017, the orchestra issued an official statement declaring that Levine would “never be employed or contracted by the BSO at any time in the future.”

In a statement, the BSO extended “sincere condolences to the family of James Levine at the news of his passing.”

“One of the most profoundly gifted musicians of the 20th and 21st centuries, James Levine led many extraordinary performances during his tenure as BSO music director (2004-11), including most memorable interpretations of the works of Beethoven, Schoenberg, Mahler, Ravel, and Brahms, among others, as well as composers he championed, including Elliott Carter, Charles Wuorinen, and John Harbison; he also led the BSO in an acclaimed tour of European summer festivals in 2007.

His final years as a maestro were dogged by health crises, including a cancerous growth on his kidney and surgery to repair a rotator cuff after he tripped on the stage at Symphony Hall in Boston in 2006. The problems forced Levine to miss weeks, even months, of performances. In March 2011, facing reality, he resigned the Boston post.

Despite the stark break with the Met Opera, it is at that institution where Levine’s musical legacy will be mainly defined. He had a 47-year association with the house and served in various positions of artistic leadership there.

From the beginning, Levine’s association with the Met seemed an ideal match of musician, art form and institution. A few weeks before turning 29, he made his debut in Puccini’s “Tosca” on June 5, 1971, a matinee for which he had had no stage rehearsals.

In 1973, Levine was named the company’s principal conductor, the first person to hold that post. The next year, with the departure of Rafael Kubelik, who had a brief and uneasy tenure as music director, Levine took over that title and settled in for what turned out to be 2,552 performances, far more than any other conductor in its history, as well as the creation of an extensive catalog of recordings and videos, including some landmark Met productions.

His movements were nimble but never attention-grabbing. He encouraged orchestra players to watch his face, which beamed with pleasure when things were going right and signaled an alert when called for. “Give me some eyes” was his frequent request.

By the late 1980s, the Met Orchestra was considered among the top opera house ensembles in the world. That was not enough for Levine. He instituted a regular series of orchestra concerts at Carnegie Hall and transformed what had been periodic chamber music programs with Met musicians into the popular Met Chamber Ensemble.

A proficient and elegant pianist, he forged close musical ties with the Met players by performing chamber works with them. In time, many critics came to consider the Met Orchestra on a par with the leading symphonic ensembles of the world.

Rumors of Levine’s alleged sexual misconduct with younger men had trailed him for decades. Although periodically news organizations had looked into the story, nothing concrete turned up until December 2017. Amid the tide of allegations against powerful men in what came to be called the #MeToo movement, four men went public with accusations that Levine had sexually abused them. The acts were alleged to have taken place as far back as 1968 and began, the accusers each maintained, when they were teenagers.

The Met hired an outside law firm to investigate and suspended Levine pending the results. In March 2018, after the investigation found what the Met called credible evidence that Levine had engaged in “sexually abusive and harassing conduct,” the company fired him.

Days later Levine sued the Met for breach of contract and defamation. The suit claimed that Peter Gelb, who had been general manager since 2006 and in public had been a steadfast supporter of Levine, had “brazenly seized” on allegations of misconduct as “a pretext to end a long-standing personal campaign to force Levine out.” The company responded in May of that year with a countersuit, releasing evidence that, according to a company statement, Levine had “used his reputation and position of power to prey upon and abuse artists,” citing examples of misconduct that it said had occurred from the 1970s through 1999.

Levine’s suit sought at least $5.8 million. The Met sought roughly the same amount. The two sides settled in the summer of 2019, agreeing that the Met and its insurer would pay Levine $3.5 million.

In July 2020, the Maggio Musicale festival in Florence, Italy, announced his return to the podium the following January, but those performances were canceled because of the coronavirus pandemic.

James Lawrence Levine was born June 23, 1943, in Cincinnati. His father, Lawrence Levine, under the name Larry Lee, was a bandleader and pop crooner in Los Angeles during the 1930s; he later returned to Cincinnati, his hometown, to work in his father’s clothing business. Levine’s mother, the former Helen Goldstein, had been an actress in New York under the name Helen Golden.

By the age of 2, Levine was picking out tunes on the family’s Chickering piano. Formal lessons with Gertrude Englander began when he was not quite 5. Thor Johnson, conductor of the Cincinnati Symphony, took an interest in young Jimmy, who advanced quickly and made his debut with the orchestra at 10, playing Mendelssohn’s Piano Concerto No. 1.

His teacher persuaded his parents to take him to New York for an evaluation at the Juilliard School. Renowned piano pedagogue Rosina Lhevinne heard him play and urged the dean of the school to offer him a scholarship.

In 1956, Levine went to the Marlboro Festival in Vermont, where he worked with pianist Rudolf Serkin and was the chorus master for a performance of Mozart’s “Così fan tutte” put on by the resident musicians and singers. The next year he spent the first of 14 summers at the Aspen Music Festival in Colorado, where he committed himself to a conducting career.

In 1961, after graduating from high school, he moved to New York and enrolled in Juilliard’s college division, where he studied with conductor Jean Morel. Levine left Juilliard without completing a degree.

Levine’s debut with the Cleveland Orchestra came in 1967, conducting Strauss’ tone poem “Don Juan.” While there he met Suzanne Thomson, a young oboist from Detroit, who put aside her own career to become Levine’s personal assistant and living companion, sharing his Upper West Side apartment from the early 1970s.

In 1966, while still working in Cleveland under his mentor George Szell, who was music director of the Cleveland Orchestra for 24 years, Levine founded the University Circle Orchestra, an ensemble of young musicians interested in contemporary music. The next year he conducted the orchestra in the premiere of Milton Babbitt’s “Correspondences,” a formidably difficult 12-tone work, winning its composer’s lasting admiration.

In March 2018 The Boston Globe published a long expose of Levine’s years with the student ensemble in Cleveland, drawing on some two dozen interviews with former students and musicians, who described a cultlike atmosphere around Levine, even though he was not much older than them. The participants, who became known as “Levinites,” recalled belittlement by their mentor, loyalty tests and even group sex.

Just 15 years after his Met debut, Levine’s leadership role there was formalized in 1986 when he became the house’s artistic director, a title that was scaled back to music director in 2004 when he began his tenure with the Boston Symphony.

He is survived by his sister Janet; his brother, Thomas, died in April.Eagle contributor Clarence Fanto contributed to this report.

A reflection from music critic Andrew Pincus: The tragedy of James Levine

Classical music critic Andrew Pincus reflects on the professional and personal life of James Levine: "James Levine exploded onto the Tanglewood scene in 2005. Suddenly, the man was everywhere, rehearsing and conducting the Boston Symphony and Tanglewood Music Center orchestras, coaching conducting students, sitting in on other master classes, speaking out.