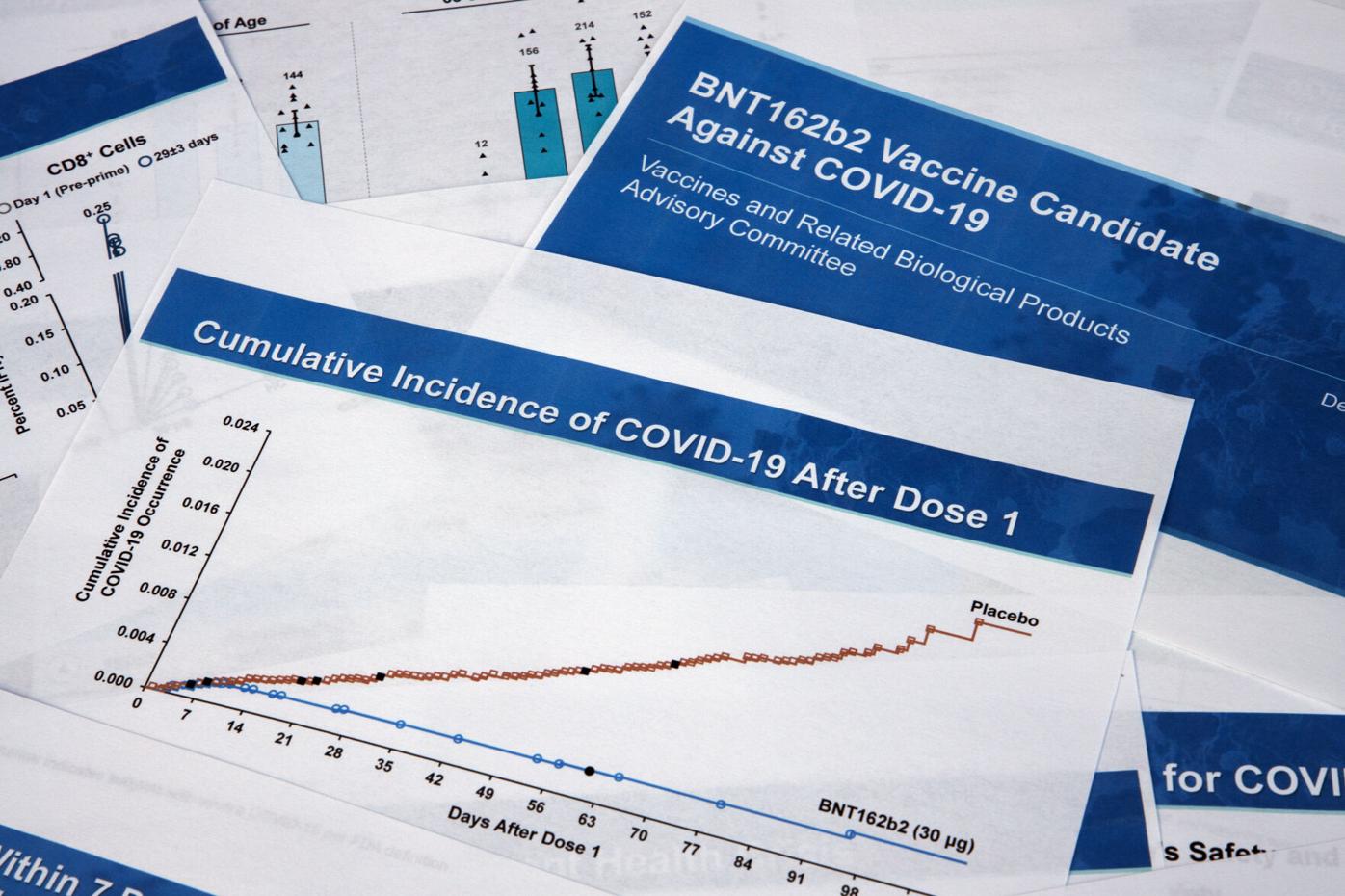 Documents created by Pfizer for the meeting with the Food and Drug Administration advisory panel, as Pfizer seeks approval for emergency use of their COVID-19 vaccine, are seen on Thursday. The meeting of outside advisers to the Food and Drug Administration represented the next-to-last hurdle before the expected start of the biggest vaccination campaign in U.S. history. Depending on how fast the FDA signs off on the panel's recommendation, shots could begin within days. 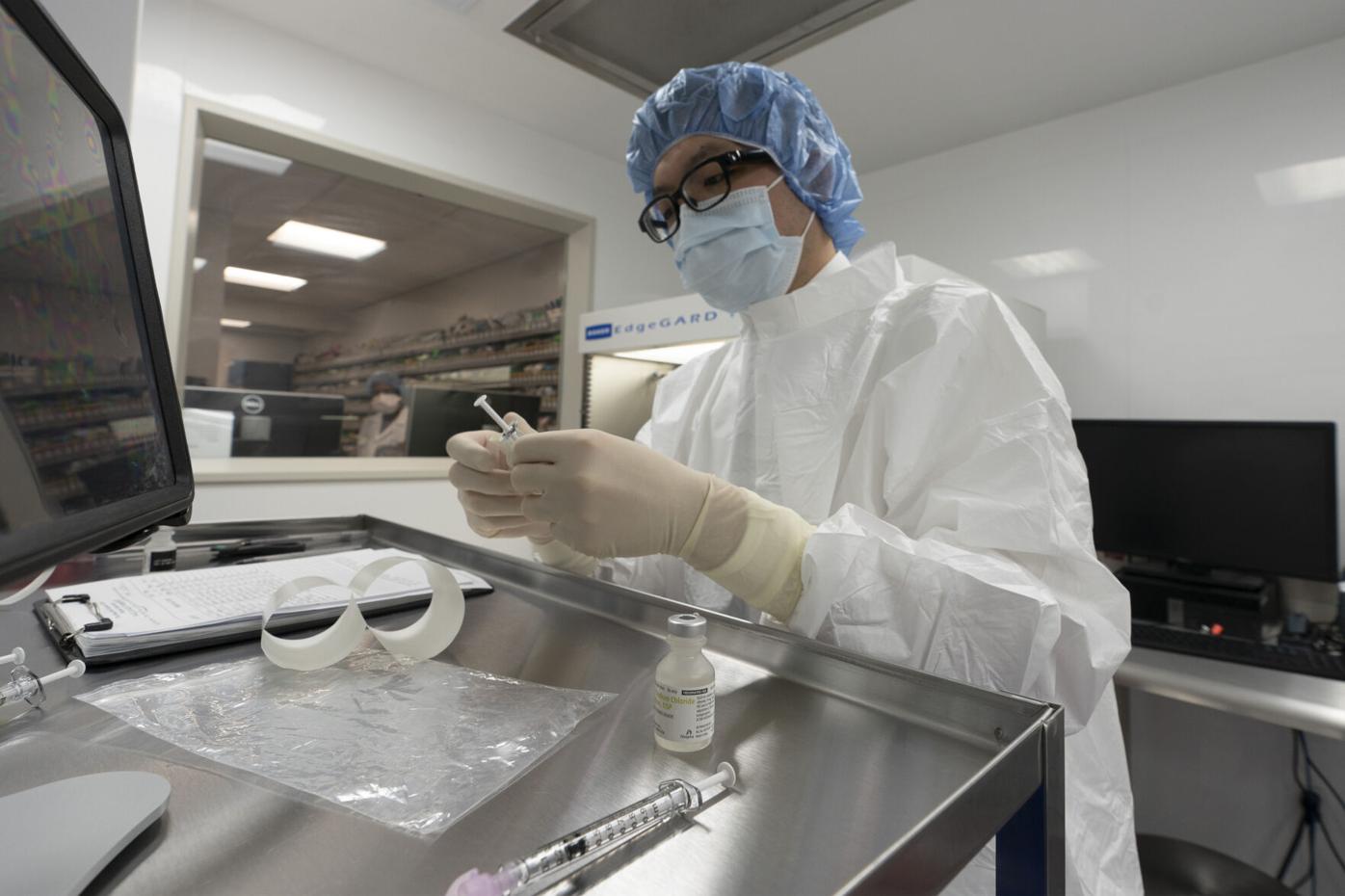 A pharmacist labels syringes in a clean room where doses of COVID-19 vaccines will be handled, Wednesday, at Mount Sinai Queens hospital in New York. The hospital expects to receive doses once a vaccine gets the emergency green light by U.S. regulators.

Documents created by Pfizer for the meeting with the Food and Drug Administration advisory panel, as Pfizer seeks approval for emergency use of their COVID-19 vaccine, are seen on Thursday. The meeting of outside advisers to the Food and Drug Administration represented the next-to-last hurdle before the expected start of the biggest vaccination campaign in U.S. history. Depending on how fast the FDA signs off on the panel's recommendation, shots could begin within days.

A pharmacist labels syringes in a clean room where doses of COVID-19 vaccines will be handled, Wednesday, at Mount Sinai Queens hospital in New York. The hospital expects to receive doses once a vaccine gets the emergency green light by U.S. regulators.

WASHINGTON — A U.S. government advisory panel endorsed widespread use of Pfizer’s coronavirus vaccine Thursday, putting the country just one step away from launching an epic vaccination campaign against the outbreak that has killed close to 300,000 Americans.

Shots could begin within days, depending on how quickly the Food and Drug Administration signs off, as expected, on the expert committee’s recommendation.

“This is a light at the end of the long tunnel of this pandemic,” declared Dr. Sally Goza, president of the American Academy of Pediatrics.

In a 17-4 vote with one abstention, the government advisers concluded that the vaccine from Pfizer and its German partner BioNTech appears safe and effective for emergency use in adults and teenagers 16 and over.

That endorsement came despite questions about allergic reactions in two people who received the vaccine earlier this week when Britain became the first country to begin dispensing the Pfizer-BioNTech shot.

While there are a number of remaining unknowns about the vaccine, in an emergency, “the question is whether you know enough” to press ahead, said panel member Dr. Paul Offit of Children’s Hospital of Philadelphia. He concluded that the potential benefits outweigh the risks.

The decision came as COVID-19 cases surge to ever-higher levels across the U.S., with deaths setting an all-time, one-day record of more than 3,100 on Wednesday.

Pfizer has said it will have about 25 million doses of the two-shot vaccine for the U.S. by the end of December. But the initial supplies will be reserved primarily for health care workers and nursing home residents, with other vulnerable groups next in line until ramped-up production enables shots to become widely available on demand — something that will probably not happen until the spring.

Next week, the FDA will review a second vaccine, from Moderna and the National Institutes of Health, that appears about as protective as Pfizer-BioNTech’s shot. A third candidate, from Johnson & Johnson, which would require just one dose, is working its way through the pipeline. Behind that is a candidate from AstraZeneca and Oxford University.

U.S. health experts are hoping a combination of vaccines will ultimately enable the U.S. to conquer the outbreak.

Still, experts estimate at least 70% of the U.S. population will have to be vaccinated to achieve herd immunity, the point at which the virus can be held in check. That means it could be several months before things start get back to normal and Americans can put away their masks.

All eyes now turn to the FDA staff scientists who will make the final decision of whether to press ahead with large-scale immunizations with Pfizer-BioNTech's vaccine. FDA’s vaccine director Dr. Peter Marks said a decision would come within “days to a week.”

Dr. William Moss of Johns Hopkins University, who was not involved in the expert panel's review, welcomed the outcome, saying, “Given how bad the pandemic is now, we need to move.”

The independent review by non-government experts in vaccine development, infectious diseases and medical statistics was considered critical to boosting Americans’ confidence in the safety of the shot, which was developed at breakneck speed less than a year after the virus was identified.

Regulators not only in Britain but in Canada have already approved the vaccine for use in their countries, and President Donald Trump and White House officials have complained for weeks that the FDA was moving too slowly.

“Americans want us to do a scientific review, but I think they also want us to make sure we’re not wasting time on paperwork as opposed to going forward with the decision,” FDA Commissioner Stephen Hahn said before the meeting.

The Pfizer-BioNTech shot remains experimental because that final-stage study isn’t complete. As a result, the expert panel wrestled with a list of questions that have yet to be answered.

For example, while the vaccine is more than 90% effective in blocking the symptoms of COVID-19, the FDA’s advisers stressed it is not yet clear whether it can stop the silent, symptomless spread that accounts for up to half of all cases.

“Even though the individual efficacy of this vaccine is very, very, very high, you really as of right now do not have any evidence” that it will lower transmission, said Dr. Patrick Moore of the University of Pittsburgh. He urged Pfizer to take additional steps to answer that question.

Several of the dissenting panel members objected to authorizing the shot for 16- and 17-year-olds, given their small numbers in the study and the low risk they face from COVID-19.

Members worried, too, that Pfizer will lose its opportunity to answer critical questions once it begins offering the real vaccine to study participants who had been getting dummy shots up to now.

The company proposed gradually moving those patients to the vaccine group, with priority based on age, health conditions and other factors. Under that plan, 70-year-old participants would cross over before healthy 30-year-olds.

Pfizer must still show whether the vaccine works in children younger than 16 and in pregnant women.

On the safety front, as widespread vaccinations begin, the first recipients will be closely tracked by government health authorities, since studies in tens of thousands of people can’t detect side effects that strike 1 in a million. Hanging over the meeting were the British allergic reactions and a warning from authorities there that people with a history of serious reactions shouldn’t get the vaccine for now.

Pfizer representatives said they have seen no signs of allergic reactions in their trial. But some of the FDA advisers fear the British warning will deter millions of Americans with allergies who might benefit from the COVID-19 vaccine from giving it a try, and urged additional studies to try to settle the issue.

“This issue is not going to die until we have better data,” Offit said.