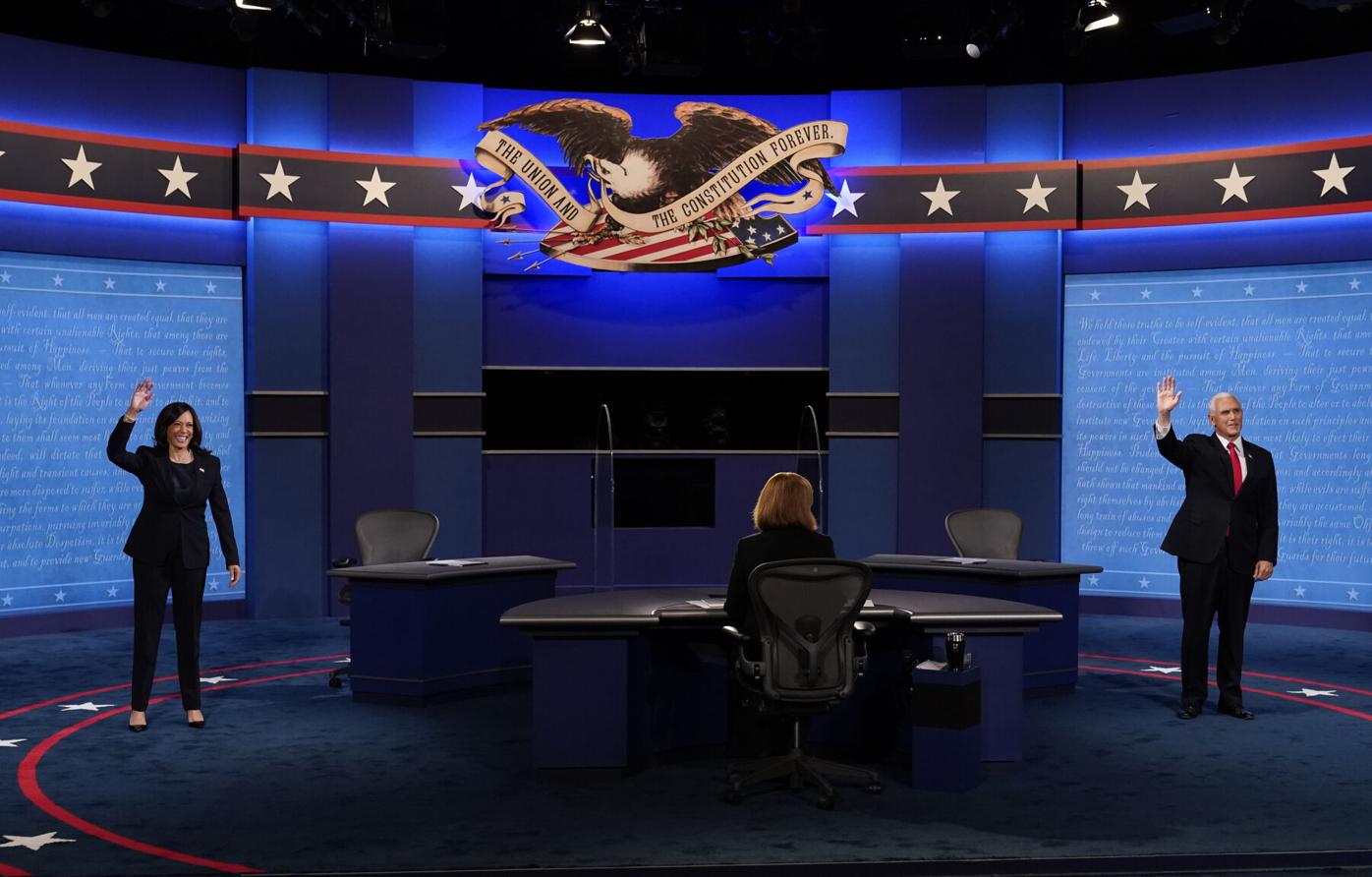 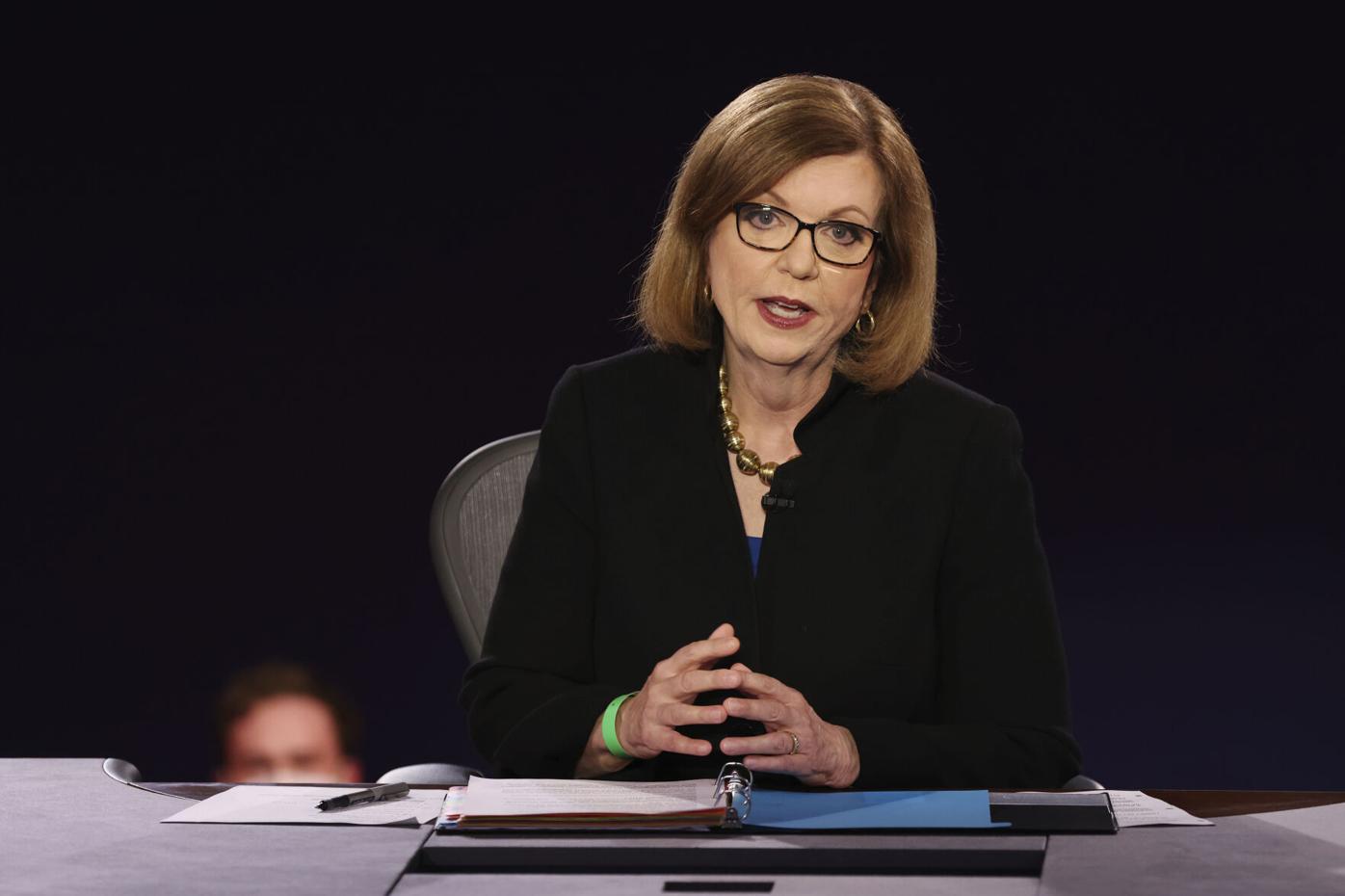 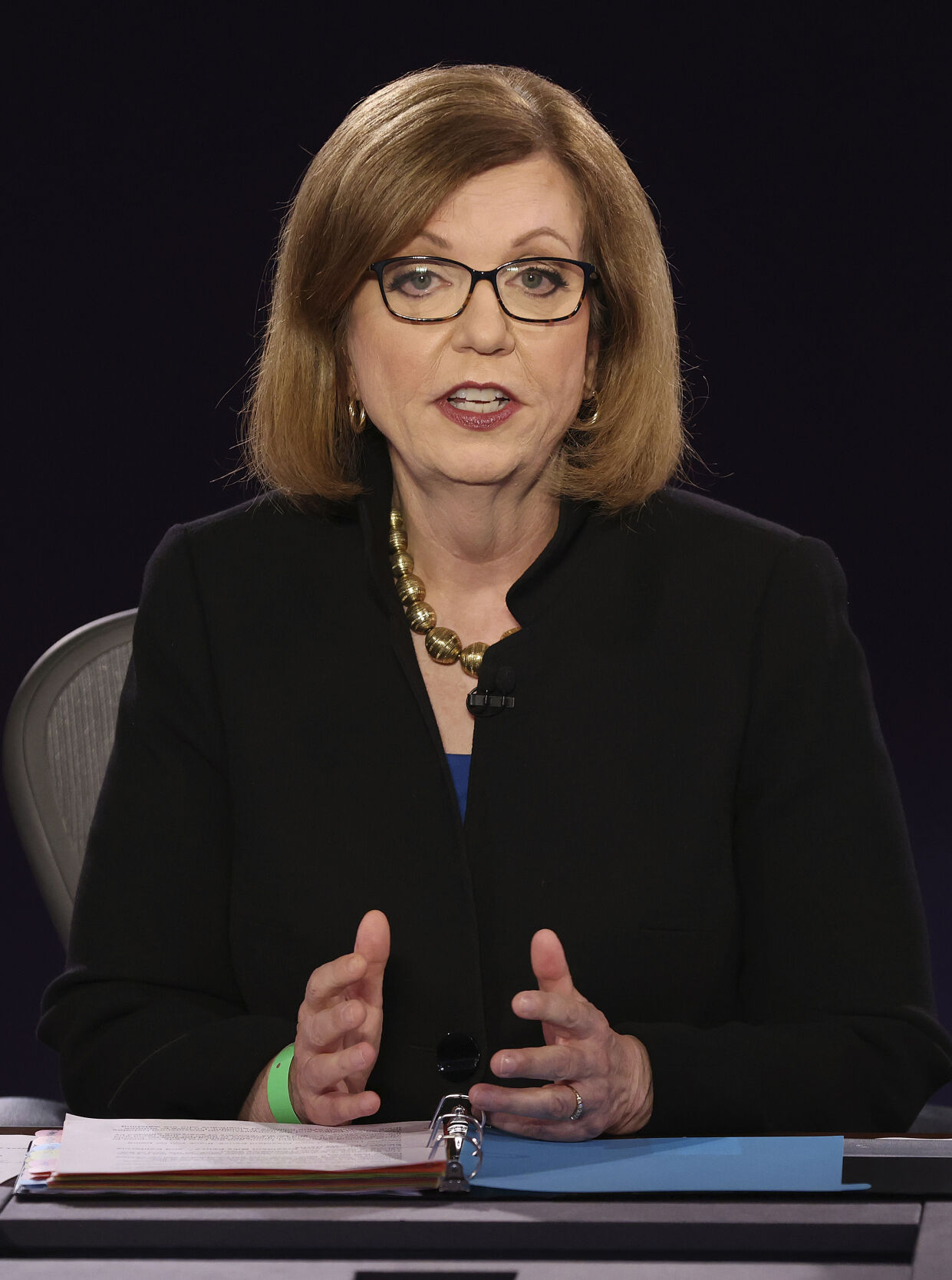 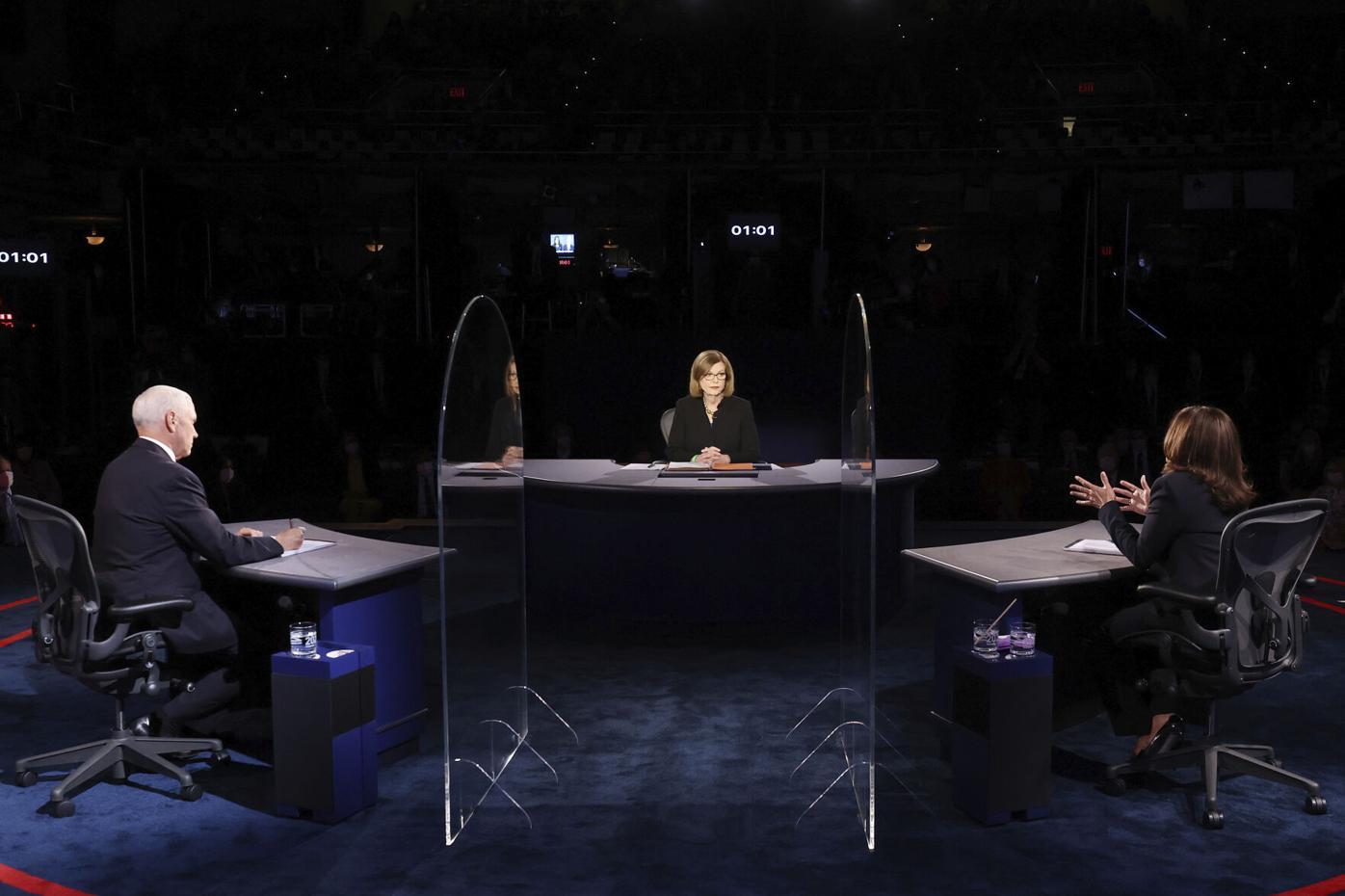 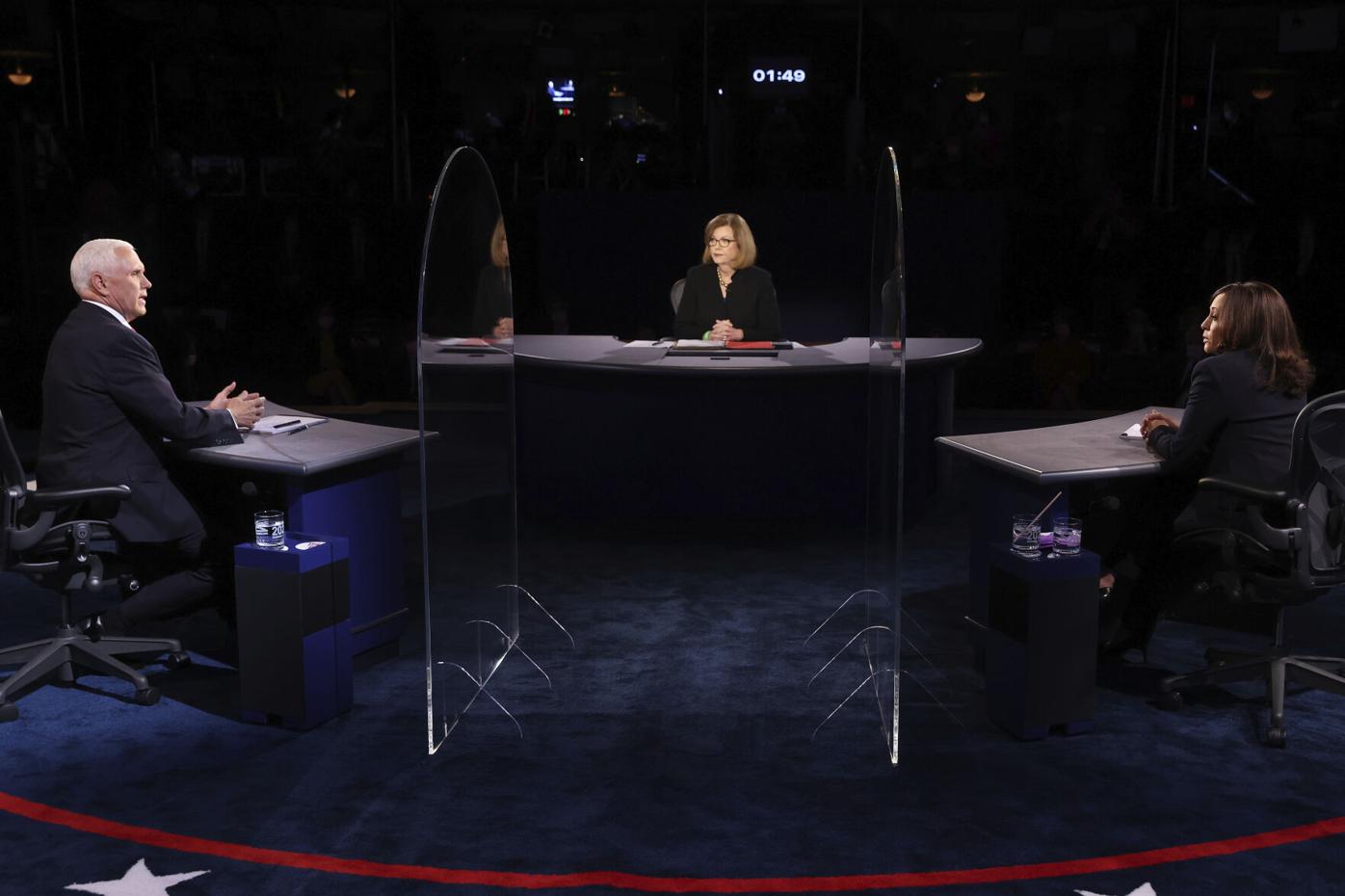 SALT LAKE CITY — Republican Mike Pence firmly defended the Trump administration’s handling of the COVID-19 pandemic that has killed more than 210,000 Americans while his Democratic challenger, Kamala Harris, condemned “the greatest failure of any presidential administration” in a Wednesday night debate dominated by the coronavirus.

Because of the virus, the candidates were separated by plexiglass barriers in the debate, which was a far more civil affair than last week’s presidential faceoff in which President Donald Trump, now back in Washington recovering from COVID-19, constantly interrupted, almost yelling at times.

With the virus sweeping through the highest levels of government and Trump just days out of the hospital, Pence acknowledged that “our nation’s gone through a very challenging time this year.”

But he added, “I want the American people to know, from the very first day, President Trump has put the health of America first.” He promised millions of doses of a yet-to-be-announced treatment before the end of the year.

Harris assailed Trump’s consistent downplaying of the pandemic’s threat, insisting she would not take a vaccine if the Republican president endorsed it without the backing of medical professionals.

“Frankly this administration has forfeited their right to reelection based on this,” she charged.

Less than four weeks before Election Day, Republicans hoped the debate might give the Trump-Pence ticket a final opportunity to help reset a contest that could be slipping away. His poll numbers sagging, the president, with Pence at his side, is struggling to stabilize the nation in the midst of multiple crises as more than a dozen senior officials across the White House, the Pentagon and inside his campaign have been infected by the virus he claimed would disappear.

There were heated exchanges over the environment, the Supreme Court and racism, but overall the debate was far more respectful than Trump and Biden’s eight days earlier. Pence interrupted at times, but nothing like Trump had.

The prime-time meeting in Salt Lake City elevated two candidates with presidential aspirations of their own who may be asked to step into the presidency even before the end of the next term. Health questions loom over President Donald Trump, 74, who is recovering from the coronavirus, and 77-year-old Joe Biden, who would be the oldest U.S. president ever.

Republicans desperately want to cast the race as a choice between two candidates fighting to move the country in vastly different directions. Biden and Harris, they say, would pursue a far-left agenda bordering on socialism; the Democrats say Trump’s administration will stoke racial and other divides, torpedo health care for people who aren’t wealthy and otherwise undercut national strength.

But so long as the coronavirus is ravaging the White House and killing several hundred Americans each day, the election will almost certainly be a referendum on the Trump administration’s inability to control the pandemic, which Republicans have sought to downplay or ignore altogether for several months.

Pence’s message Wednesday night was undercut by the mere fact that the candidates and moderator were separated by plexiglass shields, seated more than 12 feet apart and facing a crowd of masked audience members who faced expulsion if they removed their face coverings. The candidates on stage revealed test results earlier in the day proving they were not infected.

Before Harris said a word, she made history by becoming the first Black woman to stand on a vice presidential debate stage. The night offered her a prime opportunity to energize would-be voters who have shown only modest excitement about Biden, a lifelong politician with a mixed record on race and criminal justice, particularly in his early years in the Senate.

Harris, 55, is the daughter of a Jamaican father and an Indian mother. She is also a former prosecutor whose pointed questioning of Trump’s appointees and court nominees helped make her a Democratic star.

Pence is a 61-year-old former Indiana governor and ex-radio host, an evangelical Christian known for his Midwestern charm and unwavering loyalty to Trump. And while he is Trump’s biggest public defender, the vice president does not share the president’s brash tone or undisciplined style.

When the debate turned to race, Pence pushed back against the existence of systemic racism in police departments.

Harris condemned the killings of Breonna Taylor in Kentucky and George Floyd in Minnesota and spoke about the protests against racial injustice in policing that followed, which Trump has portrayed as “riots” as he calls for law-and-order.

“We are never going to condone violence but we must always fight for the values that we hold dear,” Harris said. “I’m a former career prosecutor. I know what I’m talking about. Bad cops are bad for good cops.”

Pence said his heart breaks for Taylor’s family but he trusts the U.S. justice system. He called it “remarkable” that Harris, as a former attorney general and prosecutor, would question the grand jury’s decision in the case not to charge an officer with killing her.

Pence rejected the idea that law enforcement officers have a bias against minorities.

“I want everyone to know who puts on the uniform of law enforcement every day, President Trump and I stand with you,” Pence said. “We don’t have to choose between supporting law enforcement, proving public safety and supporting our African American neighbors.”

The candidates also clashed on taxes — or specifically, Trump’s refusal to release his tax returns four years after repeatedly promising to do so. The New York Times reported last month that the president pays very little personal income tax but owes hundreds of millions of dollars in debt.

“It’d be really good to know who the president owes money to,” Harris said.

“The one thing we know about Joe, he puts it all out there. He is honest, he is forthright,” she added. “Donald Trump, on the other hand, has been about covering up everything.”

Pence defended Trump as a job creator who has paid more than his fair share of taxes and shifted toward Biden: “On Day One, Joe Biden’s going to raise your taxes.”

While the debate covered a range of topics, the virus was at the forefront.

Trump released a video just three hours before the debate calling his diagnosis “a blessing in disguise” because it shed light on an experimental antibody combination that he credited for his improved condition — though neither he nor his doctors have a way of knowing whether the drug had that effect.

Pence serves as chair of the president’s coronavirus task force, which has failed to implement a comprehensive national strategy even as Trump himself recovers from the disease and the national death toll surges past 210,000 with no end in sight.

The candidates appeared on stage exactly 12.25 feet (3.7 meters) apart and separated by plexiglass barriers. Both candidates released updated coronavirus test results ahead of the debate proving they were negative as of Tuesday.

Critics suggested that Pence should not be at the debate at all.

The vice president attended an event last week at the White House with Trump and others who have since tested positive, but Pence’s staff and doctors insist he does not need to quarantine under Centers for Disease Control and Prevention guidelines.

Wednesday’s debate was the first and last featuring the vice presidential contenders. Trump and Biden are set to face off again next week, and for a final time the week after, as the 2020 election speeds to its finale.