BOSTON — Massachusetts should create a centralized COVID-19 vaccine sign-up system to let all residents preregister for shots, confirm eligibility and receive a notification when an appointment becomes available at a nearby location, members of the state's congressional delegation said Tuesday in a letter to Gov. Charlie Baker.

"A disjointed and cumbersome sign-up process has left seniors confused and unable to access desperately needed vaccine appointments, and the disproportionate reliance on mass vaccination sites has left appointments unfilled with large portions of our most vulnerable populations unserved," the Democratic lawmakers wrote in the letter to the Republican governor.

"We remain deeply concerned that the absence of a centralized pre-registration system for vaccine appointments has contributed to a slow and inequitable deployment of vaccines in Massachusetts," the lawmakers added.

U.S. Rep. Richard E. Neal, the Springfield Democrat who represents Berkshire County, sent his own letter Tuesday to Baker, making many of the same points. But, Neal noted as well that in rural Western Massachusetts, people are being asked to travel too far to vaccine sites — a particular burden for those without access to public transportation. 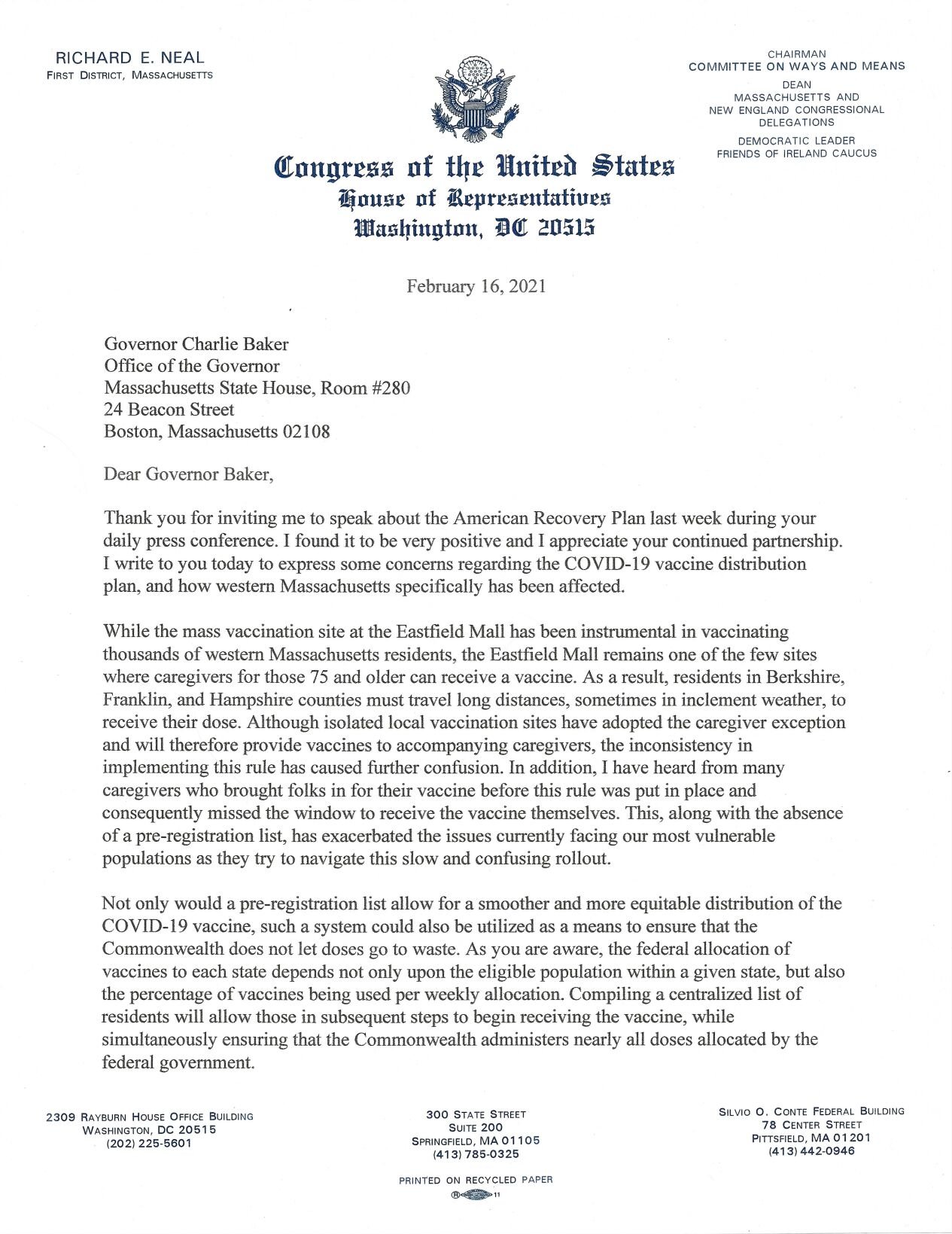 Neal also said that Baker's decision to allow vaccine access to people accompanying those officially eligible created inconsistency and confusion. Some sites did not honor that "caregiver" provision, he said in the letter, and the measure came too late for residents who already had helped family members 75 and older get to vaccine clinics.

The COVID-19 Vaccine Finder lets individuals search for locations near them by entering their ZIP code, city or town name, or the name of a vaccination location. Residents also can filter results by site type, such as mass-vaccination locations, locations run by local health departments, retail pharmacies or health care locations.

Some lawmakers in Massachusetts are demanding to know why the Baker administration has not spent more than $1 billion in federal coronavirus stimulus money.

"We need to stop sitting on money," state Rep. Mike Connolly, D-Cambridge, told the Boston Herald. "He was sitting on money for several months while we engaged in a big debate [about] how to protect tenants from eviction."

"The governor needs to start allocating these resources immediately — not in the future, when it may be too late for small businesses presently on the verge of closure — but now, when they need it to survive," she said.

About $1.38 billion of the aid allocated to Massachusetts for expenses related to the COVID-19 public health emergency had been spent, leaving $1.32 billion on the table, according to state data.

A spokesperson for the Executive Office for Administration and Finance responded that all coronavirus relief fund money received has been "spent or committed."

The state might be holding on to money for potential financial issues this year, said Greg Sullivan, research director for the government watchdog organization Pioneer Institute.

"The administration is playing it tight to the vest because many problems — that could be very expensive to fix — are going to be coming up this year," he said, including public transit, higher education and an anticipated $4 billion unemployment trust fund deficit.

The Checkup for March 2: More reports from Vexation Nation on vaccine hunt

'Get your shot and don’t think about it again:' J&J doses to boost local rollout, as legislators push for teacher doses