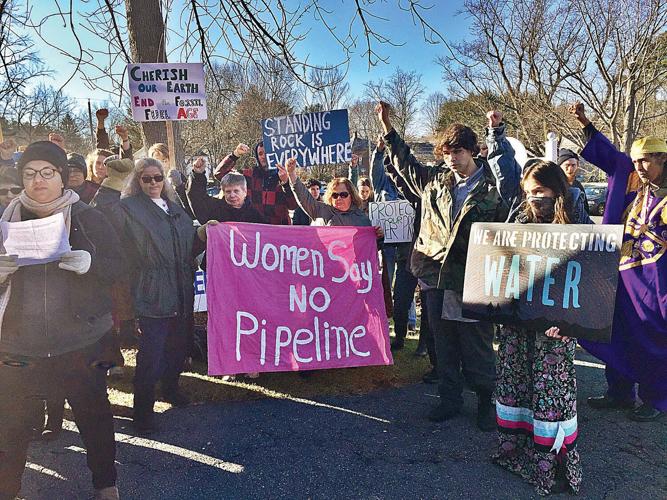 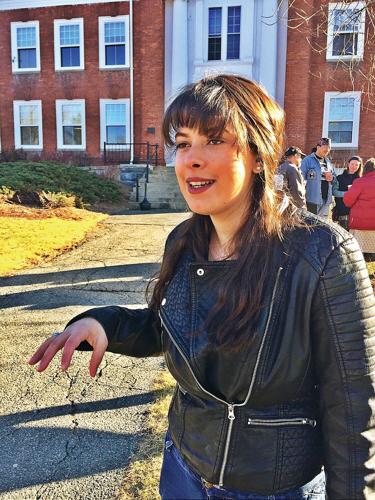 Karla Colon-Aponte, 22, talks about an altercation with police during an arrest for assault and battery on a police officer during an anti-pipeline demonstration in Sandisfield. The charge was dismissed Thursday.

Karla Colon-Aponte, 22, talks about an altercation with police during an arrest for assault and battery on a police officer during an anti-pipeline demonstration in Sandisfield. The charge was dismissed Thursday.

GREAT BARRINGTON — Assault and battery charges have been dropped against a water protector who was arrested after tangling with a state trooper during an October pipeline protest in Otis State Forest.

Karla Colon-Aponte was among a group of 14 activists in Southern Berkshire District Court on Thursday as an indigenous prayer circle wrapped up outside the packed courthouse. Most faced trespassing charges; Colon-Aponte was facing charges of assault and battery on a police officer and disorderly conduct.

Judge Paul Vrabel reduced all the charges to a civil infraction, with the exception of one whose hearing had to be moved to Jan. 11 because he hadn't yet obtained a lawyer. All civil responsibility hearings for the other activists were set for Jan. 30.

Colon-Aponte, 22, said she was surprised that such a serious charge would be dropped, and suggested perhaps it reflects her side of the story — that she didn't push a trooper's arm while walking on the road near Tennessee Gas Pipeline Co.'s headquarters.

"I was disappointed because I wanted them to try to prove that to everyone," she said of the dismissal.

A spokesman for the Berkshire County District Attorney's office was unable to comment about the reasoning for the dismissal since he hadn't yet had a chance to discuss it with the prosecutor.

The incident was one of a handful that took a more antagonistic turn as a younger group of water protectors joined with more sedate older activists to oppose the Kinder Morgan subsidiary's third natural gas line, which began flowing gas last month, through two miles of state-owned and protected forest.

The roughly four-mile Massachusetts stretch of the larger tri-state Connecticut Expansion Project has raised concerns about climate change and other factors. Nearly 100 arrests have been made since early May, but Colon-Aponte's was among the few in which the police have resorted to some use of force.

Later in the month, Jacob Renner was subdued with a stun gun after running during an arrest. Renner's hearing was postponed to January until he could speak with a court-appointed attorney.

The arrest was filmed by another activist and shows Colon-Aponte walking as the trooper asks her to move off the road. It is unclear what exactly happens next, but she ended up on the ground with the trooper on top of her.

"I must have grazed his arm," Colon-Aponte said outside the courthouse, adding she might have done it when she spun around.

It was a "chaotic" day, according to the police report. One water protector had climbed on top of a tractor-trailer cab to stop it from heading to the pipeline work site. Two others sat or laid down in front of moving vehicles.

And it was the first time any of the Otis State Forest activists were charged with resisting arrest and assault and battery on a police officer.

Colon-Aponte, who moved to Holyoke from Puerto Rico when she was 6, but went back for high school, said that while at the Standing Rock, N.D., pipeline opposition last year she met others from Puerto Rico and discovered her Taino Indian roots.

She came to Otis State Forest for the same reason she spent about two months at the Standing Rock encampment, where she went with a friend she had met volunteering in Baton Rouge, La., after the 2016 flash flooding.

"It is my duty as a human being," she said. "If I'm going to live on this planet, I have to protect it."

When she's not an activist, Colon-Aponte said she is working toward an environmental engineering degree at Holyoke Community College. She also works in restaurants and as a film extra.

Outside the courthouse, it was clear the number of activists had grown. Benji Buffalo is from Montana. He and his partner, Tracey Strobel, met at Standing Rock, where Strobel said she had been with her children for three months as a "soup-maker."

The two held a poster that said, "Standing Rock is Everywhere," and on Buffalo's denim jacket was written "mni wiconi," which means "water is life" in Lakota.

Cory Flanders, a member of the Sugar Shack Alliance protest group, said in a statement that "white activists" got different treatment than the water protectors, who are an indigenous-led group.

But there is something to be grateful for here, said local attorney Kathleen Jackson, who had helped in the legal aid tent at Standing Rock for a week last year. She told The Eagle that she was struck by the contrast in the way the state has handled these cases compared to the way North Dakota escalated the charges for water protectors at Standing Rock.

"There were grandmothers, and people who had lived their whole lives as impeccable citizens, facing felonies — women who went away to get degrees so they could come back and teach on the reservation who could lose their jobs," she said.

Asked what he will do now that the pipeline is flowing gas and the environmental cleanup is almost done, Carpenter-Lott said he would head home to the Wind River Indian Reservation in Wyoming for the holidays.

And when asked if she would continue on as a water protector, Colon-Aponte said she would.

"I will do this forever," she said.

Heather Bellow can be reached at hbellow@berkshireeagle.com 413-329-6871 or on Twitter @BE_hbellow.