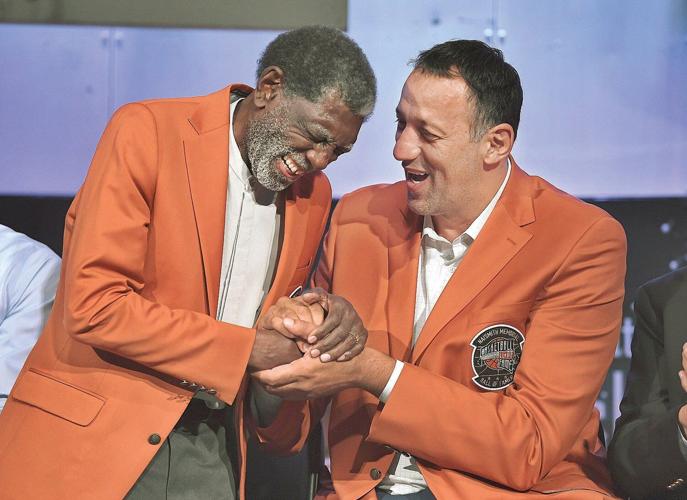 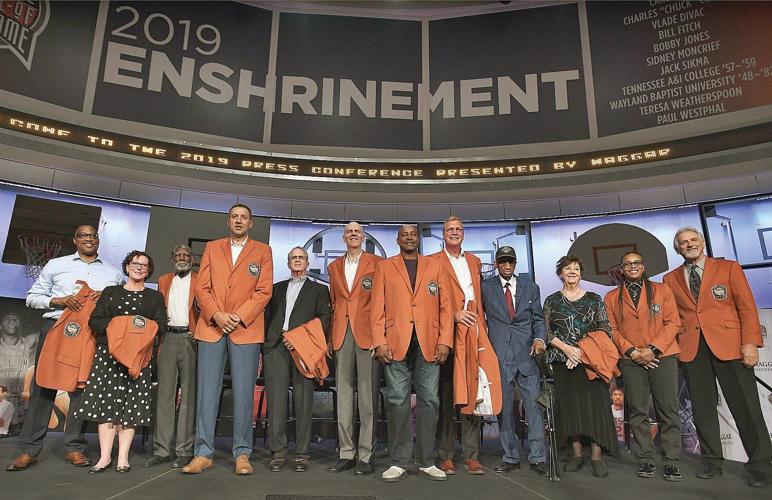 SPRINGFIELD — It may have been 24 hours before the actual ceremonies, but Friday's speeches for the new class of inductees at the Naismith Memorial Basketball Hall of Fame might have a long way to go in order to top what Dick Barnett said on Thursday afternoon.

Barnett, who won two NBA championships with the New York Knicks, represented his Tennessee A&I basketball team that won three consecutive NAIA national championships in the late 1950s, as the team was being inducted into the Hall.

Barnett, who later earned his PhD from Fordham and taught at St. John's University, wasted little time in making a point that brought the crowd in the Hall's center court to its feet.

"I really didn't believe as a young man, in education. As a young black male, I wanted to participate in athletics. So I went to Tennessee [A&I] and left without a degree. Let me give you guys a lesson," he said. "I'm Dr. Dick Barnett now."

Barnett's team made up part of a 12-inductee class to the Hall of Fame.

The Class of 2019 is highlighted by the induction of former Boston Celtic Chuck Cooper. Cooper, who played his college basketball at Duquesne, was the first African-American player to be drafted by an NBA team, when Red Auerbach made the call for the 1950 season.

The class received its Hall of Fame blazers in a late afternoon ceremony. They will all be at Springfield's Symphony Hall on Friday night for the actual induction ceremonies. The Hall of Famers will be presented and will speak to the capacity crowd.

Hall of Fame weekend ends on Saturday with the ring presentation ceremony and banquet at Mohegan Sun Casino in Uncasville, Conn.

Cooper, who died in 1986, played six seasons for the Celtics.

"I know my father would be thrilled. He loved the game of basketball, and it really afforded him the opportunity to break barriers on and off the court," Chuck Cooper's son, Chuck III, said. "It's just been hard to believe that it's been 70 years since that historic 1950 NBA Draft. Special thanks to the Boston Celtics organization, that he had so much respect for for having the courage to make that selection."

Barnett, who was a first-round pick of the former Syracuse Nationals back in 1959, played in the NBA for 14 seasons, winning NBA titles with the Knicks in 1970 and 1973 as part of a backcourt that included Walt "Clyde" Frazier and Earl "The Pearl" Monroe, both Hall of Famers. Barnett also won an American Basketball League title with the Cleveland Pipers in 1962. That team was owned by the late George Steinbrenner.

"Oct. 12, 1962, I ruptured my Achilles tendon at Madison Square Garden. The chickens came home to roost," Barnett said. "The trainer came in and said 'Dick, you might not play any more professional basketball.' I was lying on the trainer's table and I was thinking if I can't play any more professional basketball, what am I prepared to do? I made a transitional decision at that time, I said I better go back to school and get ready for the future.

"I was able to turn my dream into a lifelong adventure."

The lone woman inductee is Weatherspoon, who played at Louisiana Tech and then with the WNBA's New York Liberty. She was the first player to score 1,000 points and register 1,000 assists. She was a five-time WNBA All-Star, a 1988 Olympic gold medalist, and a six-time Italian League All-Star.

Weatherspoon's induction gave her a chance to think about where the women's game has gone, and where it might be going from here.

"We talk about it all the time. We won't say that we were skilled and talented athletes, because we felt like we were. We were well-polished and in our prime," she said. "These group of women are very talented. [They play] positionless basketball, they're versatile and flexible, and super skilled.

"It's only going to get better."

Attles, inducted as a contributor, played at North Carolina A&T, and then spent his NBA career with the Warriors. It started in Philadelphia and he moved with the team to California, where he was a player, a coach and a team executive.

"There were many nights that I would go home and have to thank [wife Wilhelmina] for being there and cheering at the game, for me," he said. "I can look out there and see a number of you who didn't cheer for me. But I do appreciate you being here."

For Sikma, his Hall of Fame induction held special meaning.

"I played against so many good centers," Sikma said in a post-ceremony media session. "With Vlade here, it's like in my career, he's the 15th Hall of Fame center I played against. It was a great time period for me to play, and the fact that I'm recognized here now, is the cherry on top."