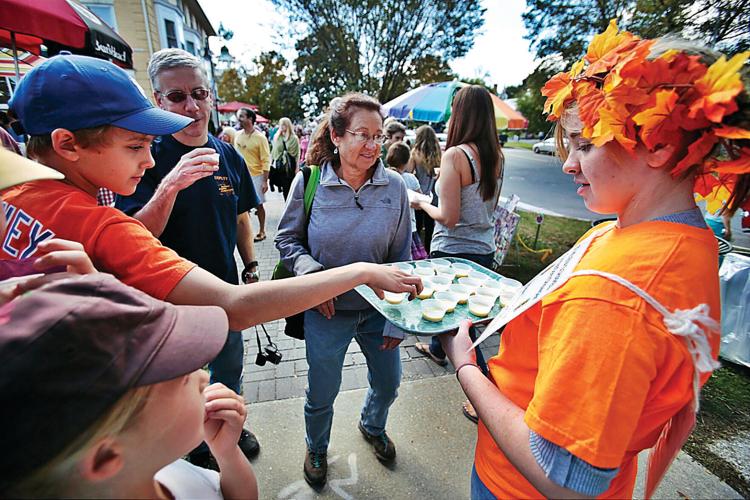 Jessica Zamboni serves samples of corn chowder on behalf of St. Helena's Chapel during the first day of the 2013 Lenox Apple Squeeze festival. 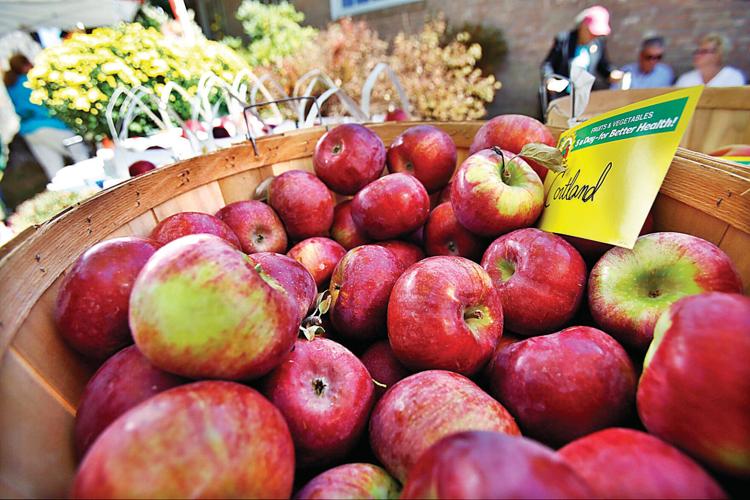 Hundreds of apples take to the streets for the 2014 Lenox Apple Squeeze festival.

Jessica Zamboni serves samples of corn chowder on behalf of St. Helena's Chapel during the first day of the 2013 Lenox Apple Squeeze festival.

Hundreds of apples take to the streets for the 2014 Lenox Apple Squeeze festival.

LENOX — With an expanded downtown footprint and a prime lineup of guest bands, the Chamber of Commerce seeks to enhance the 38th annual Apple Squeeze as a gift for local residents after the hectic summer season.

That's the goal outlined by Executive Director Kameron Spaulding, who predicted that with favorable weather, the crowd could top 20,000 over the two-day fall festival, just above last September's total.

"I look at it as our give-back, because we at the chamber make summer in Lenox a little bit unenjoyable for locals," Spaulding said, "since our goal is to bring in big crowds to swarm the downtown, so it's nice to bring the family and be able to enjoy downtown again. We kind of take it away from you for the summer, so it's nice to give it back for a weekend."

According to a chamber survey last year, about 60 percent of the Apple Squeeze visitors were Berkshire residents, 30 percent were day-trippers from the Albany and Springfield metro areas, with the remainder overnight guests from more distant points who were here for the festival.

Live music will be presented continuously on Saturday and Sunday, adjacent to the Samuel Adams Beer Garden, at the corner of Church and Housatonic streets.

The lineup of performers is especially strong this year, Spaulding noted, citing the Grammy-award winning band The SteelDrivers, recently joined by Adam Wakefield, the runner-up winner on season 10 of NBC's "The Voice."

"This year, our biggest bands, The SteelDrivers and Sierra Hull, are both playing on Sunday," he said, a change from previous years when the most prominent performers were slated on Saturday. Spaulding commented that since The SteelDrivers are selling out 2,000 to 3,000-seat venues, it's a great opportunity to see the band perform live, for free.

Another enhancement this year is that the Family Fun Zone organized by the Morris Elementary School PTO will be in Lilac Park on both weekend days from 10 a.m. to 5 p.m. Different activities will be presented on each day.

Two races sponsored by the PTO and the Pittsfield-based Berkshire Running Center begin on Sunset Avenue and end at Lilac Park on Sunday — the 5-miler is at 8:30 a.m. and the 5K at 9:30 a.m. There's also a kids 1-mile Apple Cider Race on Yokun Avenue beginning at the BUTI campus, 45 West St. All proceeds benefit the PTO, Spaulding said. (For race information, visit berkshirerunningcenter.com.) The Farm to Fork Fondo organized bike ride based at Hancock Shaker Village also will pass through Lenox on Sunday.

Explaining the shifting emphasis to Sunday, Spaulding said "we're really trying to make it a two-day event." Traditionally, Sunday attendance has been much lower.

This year, to relieve sidewalk congestion on Main Street, some of the 160 vendors — up from 135 last year — will relocate up a block to Church Street, which will be closed to traffic from Walker to Tucker streets, creating a pedestrian mall linked to Housatonic Street, which will be closed to motorists from Loeb's Foodtown to Church. Road closures supervised by local police are from 9 a.m. to 7 p.m. Saturday and 9 a.m. to 6 p.m. Sunday.

Booths will be installed in the parking spots on the closed streets. Shoppers to the town's only grocery store will be allowed in-and-out access to the Loeb's parking lot.

Main Street will remain open to traffic, Spaulding said, and a reduced number of booths there will be limited to the east side of the street.

"As the event continued to grow in the last couple of years, the intensity of the crowd has bothered me, it was so packed that it hurt the sales of our vendors, you couldn't really enjoy things," he said.

"It made it tough to get around," he added, "so we're going to thin that out and spread it all through town. It's a much bigger footprint, now we're basically in all of downtown."

He predicted that Church Street would become a centerpiece of the festival, with food trucks augmenting the vendors, and the stage with the full slate of performers sited at the key intersection of Church and Housatonic.

Among the unique new arrivals displaying their handiwork on Church Street will be B&B Micro Manufacturing, a new custom-home builder in North Adams, showcasing one of its "tiny houses" for people to tour.

The Apple Squeeze has a major positive impact on downtown restaurants, according to Spaulding, because there's a crowd in town as the dinner hour approaches. Retailers. not so much, he acknowledged, one reason the festival's footprint is spreading out to include the shop-lined Church Street. Many stores will be running special promotions, he added.

The fair is funded by vendors who pay a $125 booth fee for Lenox merchants and $195 for others. All nonprofits are charged $125. About 40 of the vendors are from Lenox, with another 90 from neighboring communities. About 30 are festival circuit-riders,with one from as far as Ohio. Since the event is classified by the state as an agricultural fair, some booths will be occupied by regulars from the summertime Lenox Farmers Market.

The deadline to reserve a booth was several weeks ago. Corporate sponsors include Adams Community Bank, Berkshire Bank, Samuel Adams Beer and the Toole Lodging Group.

As in the past, food, arts and crafts are the main attractions, Artisanal crafts include handmade jewelry, woven baskets, local soaps, quilts, photography, paintings and woodworks, among others.

Apple pies, cakes, sauce, cider, donuts, muffins and ice cream are on offer, as well as kettle corn, cake slices over a foot tall, corn chowder, wares from many food trucks and taco in a bag.