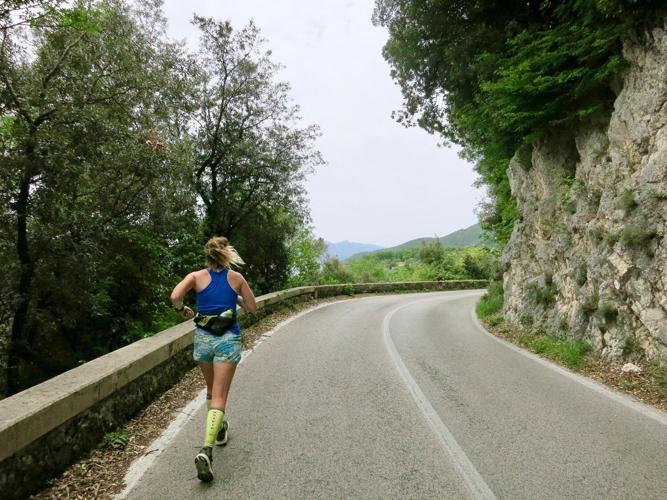 Alyssa Clark runs a marathon on a road in Italy after the pandemic lockdown was lifted. The Bennington, Vt., native ran a record 75 marathons in 75 days. 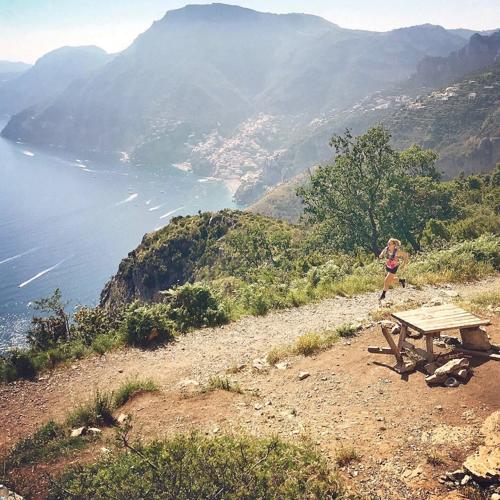 Alyssa Clark runs along the Amalfi Coast in Italy after the pandemic lockdown was lifted.

Alyssa Clark runs a marathon on a road in Italy after the pandemic lockdown was lifted. The Bennington, Vt., native ran a record 75 marathons in 75 days.

Alyssa Clark runs along the Amalfi Coast in Italy after the pandemic lockdown was lifted.

Trapped inside on the southwest coast of Italy during a seemingly unending lockdown in the teeth of a pandemic, Alyssa Clark decided to do something some might find a little crazy: She ran a marathon — on her treadmill.

Marathon No. 75 — was scheduled for Saturday in Panama City, Fla., and if you check her Instagram page, @Theory_in_Motion, chances are pretty good you'll see a 75th smiling snapshot of a woman who a few days earlier claimed she was feeling, "Not bad; a little tired but that's normal."

Clark, 27, played four years of lacrosse at Williams College after graduating in 2011 from Mount Anthony Union High School in her native Bennington, Vt.

With 75 consecutive marathons behind her, she said she's not sure how long she'll keep up the streak, but it won't be more than 100.

At first, her goal was to run a marathon every day for 14 days. But then that became 30, most of which took place on a treadmill during the lockdown in Naples, Italy, where Clark's husband, Codi, was stationed with the U.S. Navy and Alyssa worked as a manager and personal trainer at the base's gym.

Then, the restrictions loosened and she was able to back out into the world.

"In all honesty, everything felt like discovery again," she said of being let outside to run again. "Three miles in a straight line felt great."

It was then she started eyeing the world record for consecutive marathon days by a woman — that mark was held by Alice Burch, a British woman who ran 60 marathons in 60 days in 2015. (The overall record is unofficially held by Spaniard Ricardo Abad at 607 days.)

But, for Clark, marathon No. 61 was still a continent away.

On May 27, after running her 57th consecutive marathon, Clark and her husband flew to Germany on a quick stopover on their way back to the states.

"By far the most challenging one was when we arrived at the Air Force base in Germany at 10 p.m., and we had to fly out at 9:30 a.m. the next morning," she said. "So I got about an hour and a half of sleep and ran a marathon at 1 in the morning."

With a six-hour time change compounding jet lag, the Clarks opted to drive from Virginia to their ultimate destination in Florida, where Codi will attend dive school for five months before the pair move to northern California for another two-year stint.

Along that drive is when the record fell. They stopped in Charleston, S.C., and Clark was able to tackle her 61st and 62nd marathons with some friends as spectators.

"I think the marathons have sort of marked the passage of time. I began them when things were getting very scary with the pandemic. So it's kind of fun to see how this daily ritual has gone through the pandemic," said Clark, who completed her South Carolina runs amidst a series of Black Lives Matter protests. "It's been really a marker of the passage of time. I really can't believe how much the world has changed since I began this."

At the outset of this, she and her running coach, Shawn Bearden, discussed whether to share the journey or keep it a personal challenge. Through her experience, she has developed a following on social media and inspired many during a time when motivation and enthusiasm has lagged dramatically.

"That's honestly been the most heartwarming and endearing part of this entire journey. I made the decision to share things because community has always been a huge part of my running," she said. "One of the things that has kept me going, and has been incredibly inspiring to me, is the amount of people that have reached out and said I've inspired them to get out themselves. That gives me so much inspiration and drive to continue forward."

Clark reached Panama City on June 1, and over the past two weeks, she's weathered more early mornings, 90-degree heat and a few more treadmill 26.2s. She credits her husband with helping her daily recovery regimen and minimizing stress, and promised to return the favor of pit crewing for him during dive school.

Seventy-five consecutive marathons is a wild concept, but Clark grew up on endurance activities in New England and with a drive for adventure in her blood. She's the daughter of a triathlete and marathoner father, Larry, and her mother, Becky, once biked across Europe. The Amos family did a lot of biking and hiking in Bennington and beyond, so when their youngest — Alyssa is the younger sister of siblings Doug and Ashley — decided to take on an endurance world record while locked down 4,000 miles away from her hometown, it didn't raise a whole lot of questions.

"They were unsurprised. I've done enough off-the-wall things that this wasn't really surprising to them," Clark laughed. "They've been very supportive. They're pretty used to me.

"I grew up in a very active household. We traveled a lot, and I was very fortunate to have that, and always was encouraged to be an athlete, be outside. I learned a lot from my family."

Clark has spent much of her outdoor runs listening to audio books by the likes of British adventurer Anna McNuff, who biked through all 50 states and ran across New Zealand. And while her treadmill miles were sometimes spent binging "Love is Blind" and "Too Hot to Handle" on Netflix, it's the will of an explorer that has powered her to this milestone.

That adventurous side led the freshly graduated Eph to three years in Hawaii, where she was a teacher and met Codi, and now on this current journey of self-exploration.

"I think what I learned the most is just the power of setting a goal and sticking to it, and not giving yourself an out," she said. "When I began this, I didn't intend to go this long, but I've never woken up thinking I don't want to do this, or I can't do this.

"You're tired, but when you commit to something, go all in. Don't give yourself an out."

That's something Clark says she'll take with her, whether she gets back into teaching, coaching, training or authors her own adventure story.

"The mind is a very powerful tool. If you tell yourself you're going to do something, it can help you overcome a lot of physical barriers," she said. "I had no idea my body could hold up to this, but I think the power of positive thinking, and the power of believing that I can do it, has helped me physically as well."

And if all of that isn't getting the job done, she'll rely on her southern Vermont roots and her dad's motto, "left, right, repeat."