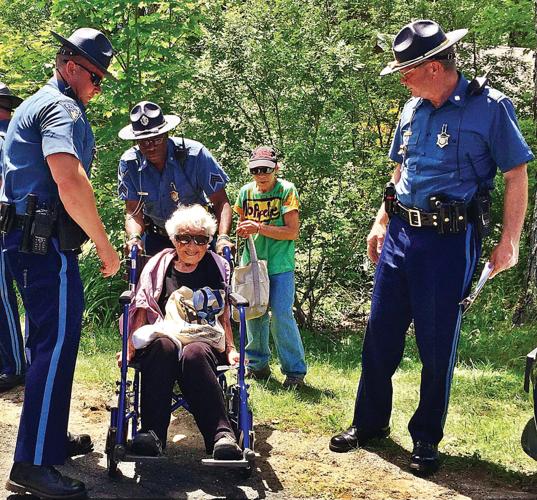 Longtime activist Frances Crowe before she is taken to Berkshire County House of Corrections after her arrest for trespassing on a Tennessee Gas Pipeline Co. easement in Otis State Forest Saturday. 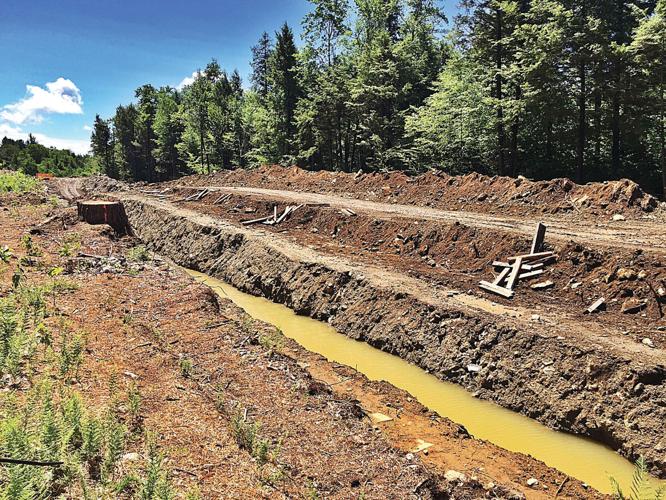 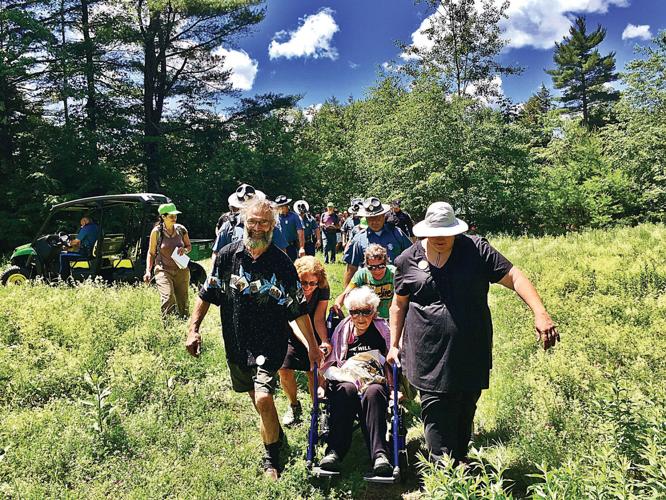 Fellow activists help Frances Crowe up the field after her arrest for trespassing at the site of the Tennessee Gas Pipeline construction in Otis State Forest in Sandisfield.

Longtime activist Frances Crowe before she is taken to Berkshire County House of Corrections after her arrest for trespassing on a Tennessee Gas Pipeline Co. easement in Otis State Forest Saturday.

Fellow activists help Frances Crowe up the field after her arrest for trespassing at the site of the Tennessee Gas Pipeline construction in Otis State Forest in Sandisfield.

SANDISFIELD - A 98-year-old woman with a long history of activism was arrested with seven others Saturday after stopping pipe-laying work in Otis State Forest.

Frances Crowe, considered a legend for her peace activism and anti-nuclear efforts, was pushed in her wheelchair to the edge of the open pipeline trench with seven other Sugar Shack Alliance members, causing Tennessee Gas Pipeline Co. workers to stop heavy machine work and call police.

Surrounded by state police after her arrest, fellow activists pushed her uphill through the pipeline easement to the backseat of a sheriff's cruiser, and when asked how many times she has been arrested, she smiled.

"Not enough," she said, prompting loads of laughter.

This is the third time Crowe has been arrested since she turned 90, after a long life with numerous arrests.

The arrests Saturday were a third round of peaceful protests since the Kinder Morgan subsidiary began work last month to its $93 million Connecticut Expansion Project, a 13-mile natural gas storage loop, part of which will run through an existing pipeline corridor in Otis State Forest.

Last week 24 activists were in Southern Berkshire District Court for a civil trespassing hearing stemming from those May charges.

The project, which was approved by the Federal Energy Regulatory Commission last year, has stirred anger from local residents and activists for many reasons, and particularly because the company - after a court battle with the state - won an easement of roughly two miles of state-owned and protected land.

"I was against Hiroshima," she said of the American atomic bombing of the Japanese city during World War II.

After becoming a peace activist, and later a war tax refuser, she said she was part of Shut It Down, a group that helped close the Vermont Yankee Nuclear Power Station in 2014.

Now it's hydro-fracked gas she is working against.

"I am very much opposed to taking our fuel out of the ground," she said. "We can meet our needs with wind and solar. This is the answer for the future."

"My life has been devoted to trying to wake people up," she added.

Sugar Shack, a group working for renewable energy, started out in the morning with a theatrical rally at Lower Spectacle Pond to begin their "summer days of resistance." There they wrote evils like "money in politics" and buried them in a cardboard casket they would later lay down next to the pipeline trench - for which some were arrested - while someone played taps on a trumpet.

Several state police troopers stood near the pond in good spirits, watching the group of around 60. They said they weren't expecting any civil disobedience. And wasn't it a glorious day after the hard morning rains, they said - and bug free.

"We just don't want anyone to get run over here," said Major Michael Habel, gesturing to all kinds of blocked traffic on this rough rural road. "We understand that they have the right to do this."

The protesters then walked the road to their staging ground, holding up tractor-trailers carrying pipes and other workers, who rolled down their windows to talk to police.

One spoke his mind.

"They drive 26 miles in their cars to protest gas and oil," one company contractor was overheard saying, referring to the activists, who are mostly from Franklin County. "If you're going to protest this you should be a minimalist about what you're protesting. Our company does solar and wind also."

Kinder Morgan's statement on climate change says the company is working toward solutions and expects "that future energy demand will be met in part by a growing proportion of renewable energy sources."

The company says it is building new natural gas lines "to make access to lower carbon and renewable energy more feasible," and says it is, among other environmental strategies, "reducing emissions of methane and other greenhouse gases from our operations."

At the Thoreau Cabin Pipeline Barricade, built by Sugar Shack on private property that abuts the pipeline easement, no one believed the company.

The group sang and cheered as Crowe was arrested.

While six were put in the van headed for jail, Connie Harvard got arrested partly so she could stay with Crowe.