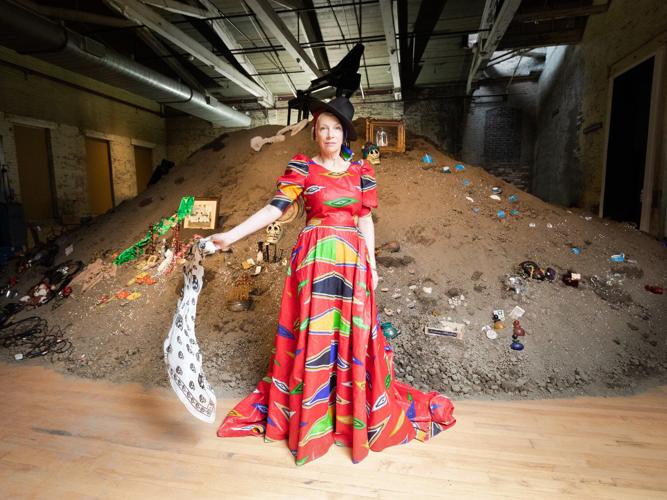 Annie Lennox stands in front of her art installation "Now I Let You Go ..." at Mass MoCA. 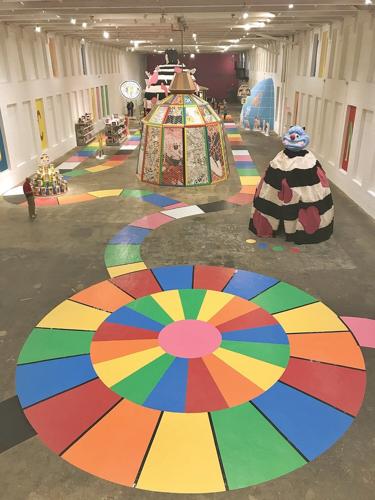 An overview of Trenton Doyle Hancock's "Mind of the Mound: Critical Mass." 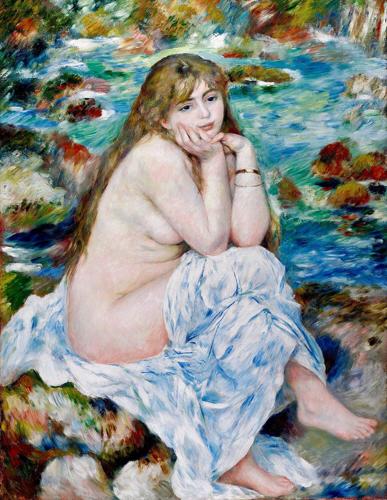 "Seated Bather" was part of "Renoir: The Body, The Senses," at The Clark Art. 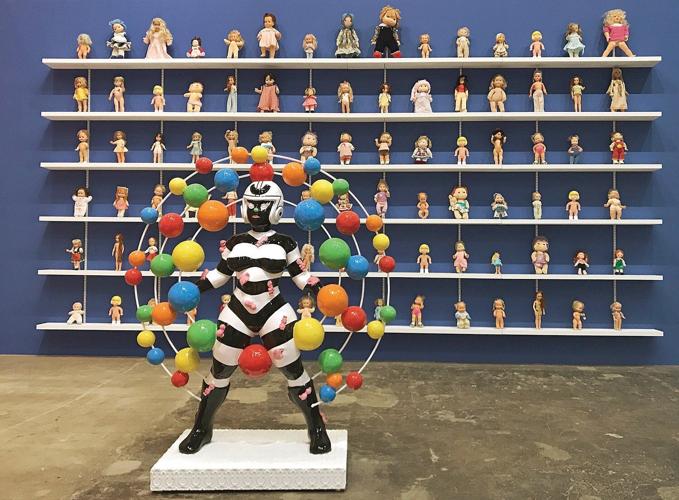 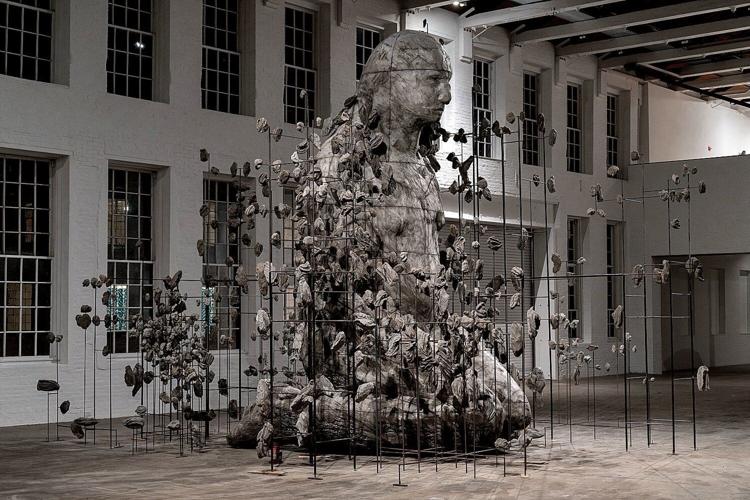 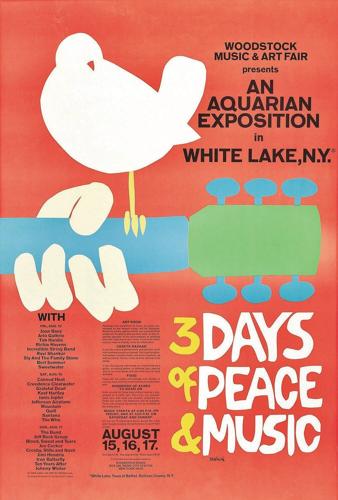 Annie Lennox stands in front of her art installation "Now I Let You Go ..." at Mass MoCA.

An overview of Trenton Doyle Hancock's "Mind of the Mound: Critical Mass."

"Seated Bather" was part of "Renoir: The Body, The Senses," at The Clark Art.

Bright colors, bold concepts and big works — art in the Berkshires was a little brighter, a little bolder and lot bigger in scale this past year.

And there was much to celebrate, from the 50th anniversary of the Norman Rockwell Museum to the installation of the 40-foot-tall elephant-esque "Big Bling" in North Adams.

Winter, the time of year when Mother Nature's palette is muddied with whites, browns and greys, was anything but dull in the Berkshires.

With a floor covered in the colorful swirling walkway of "Candy Land," cotton-candy pink walls and giant black and white mounds, Trenton Doyle Hancock's "Mind of the Mound: Critical Mass" at the Massachusetts Museum of Contemporary Art introduced us to the Moundverse, a construct first developed during the artist's childhood to shield himself from external negativity, and later, a place for him to develop his own mythos. There we were introduced to the Mounds, peaceful plant/human hybrids, the tofu-eating Vegans, a race of mutants, and Torpedo Boy, a sometimes successful hero.

"You don't have to grow up. You have to, but you don't have to lose sight. You can always reestablish a sense of youth and wonderment," Hancock said. "If you see the world through the eyes of a child, you see the truth. Children only see truth. They only speak truth. We're taught by the time we're teenagers and well into our 20s, to let go of the truth, of that wonderment, a kind of naivete. Some of those things you don't have a choice in the matter, it just happens. I find that, especially with artists, we're always fighting our way backwards to try to see the world that way again."

Brilliant colors dominated the art scene all year long, with the first pops blooming at MCLA Gallery 51 in January, when the gallery highlighted the vibrantly-colored abstract works of Dawn Nelson, Sarah Sutro and Kathline Carr, during "Colour and Form: Beauty in the Abstraction."

Vibrant reds, blues and yellows and inky blacks dominated an exhibit, "Tom Slaughter," of rarely scene works by Tom Slaughter at The Artist Book Foundation and in a concurrent show "Icon Alphabet," at Mass MoCA. At the Berkshire Botanical Garden, "Shimmering Flowers: Nancy Lorenz's Lacquer and Bronze Landscapes" shared the artist's distinctive view with an eclectic show made up of cast-bronze tabletop landscapes, lacquered boxes and an abstract screen.

Glass artist Dale Chihuly's work shimmered too. Chandeliers and installation pieces made of blown glass and metal, made by Chihuly, filled the Schantz Galleries in Stockbridge, a rare sight for a smaller venue. Meanwhile, at Ferrin Contemporary in North Adams, artist Lauren Mabry's work in "Fused," allowed colors to ooze, drip and twist around and on them.

While a visual medium, artists have always used their work to make statements about the world around them; to record history and events and to experiment — pushing the boundaries of their trade.

Pierre-Auguste Renoir was no stranger to pushing the envelope, as shown in The Sterling and Francine Clark Art Institute's major summer exhibition, "Renoir: The Body, The Senses," which included, "The Bathers." The painting, considered to be Renoir's "manifesto painting," the summation of the artist's decades-long preoccupation with the nude, is exemplary of his late work, the most stylistically controversial period of his career.

For some, this style, is the "most Renoir," of all his genres — freer in brushstroke, bolder in color, full of experimentation.

"We've come a long way from [his early days in] the studio which is certainly the point of this exhibition: to show how he was a chameleon; ever changing and ever pushing the boundaries of what paint could do," said Esther Bell, the Robert and Martha Berman Lipp chief curator at The Clark.

In a smaller, but as important show at The Clark, Ida O'Keefe was finally given the spotlight she deserved in "Ida O'Keefe: Escaping Georgia's Shadow."

While The Clark was challenging the concept of Renoir as a painter, shows at the Rockwell were taking stock of its history, as 2019 marked the 50th anniversary of the museum's founding. As part of the festivities, two shows explored illustrator Norman Rockwell's private life: "Norman Rockwell: Private Moments for the Masses" and "Inspired: Norman Rockwell and Erik Erikson." And, the museum marked the "benchmark year" it was founded with a third exhibit, "Woodstock to the Moon: 1969 Illustrated," which included items such as Rockwell's "The Final Impossibility: Man's Tracks on the Moon," (loaned by The Smithsonian), an original Woodstock poster and a Cookie Monster puppet that was used on the first season of Sesame Street.

At Mass MoCA, exhibitions such as "Suffering from Realness" and Kidspace's "Still I Rise" gave voice to artists exploring the concepts of identity, race, and realism, while also examining the place of women and women of color in art history. Artist ERRE's "Them and Us / Ellos Y Nosotros" and his re-creation of the border wall between San Diego and Tijuana, Mexico, brought immigration and the treatment/perception of immigrants into the spotlight.

Singer/songwriter Annie Lennox explored the impermanence of human existence with her art installation, "Now I Let You Go ...," through personal items she curated in, on and around a large symbolic mound of dirt; while at the Williams College Museum of Art, a re-creation of destroyed Assyrian art questioned where and to whom objects of cultural heritage belong.

Works of monumental size also dotted the great lawns throughout the year, beginning with Diana Al-Hadid's "Delirious Matter," large, wall-like structures that spent several months on the Williams College campus. Sculpture shows also dominated the landscapes of Chesterwood, which hosted "One Impulse from a Vernal Wood," and the annual SculptureNow show at The Mount.

But the biggest works showed up during the last two months of the year, with the arrival of "Big Bling" and of Ledelle Moe's "When" at Mass MoCA. Moe's show, featuring 20 tons of concrete sculptures that are a memorial to the contradictions that make up the collective human experience: strength and vulnerability, the individual and the collective, a sense of place and displacement, permanence and impermanence, grief and hope.

"These things we build — an attempt to do something permanent in the relentless impermanence in life — by making them literally hollow and fragile [Moe] is underscoring the idea that those things, that are now ruins, were supposed to be there forever, marking our time," said Susan Cross, curator of visual arts at the museum.