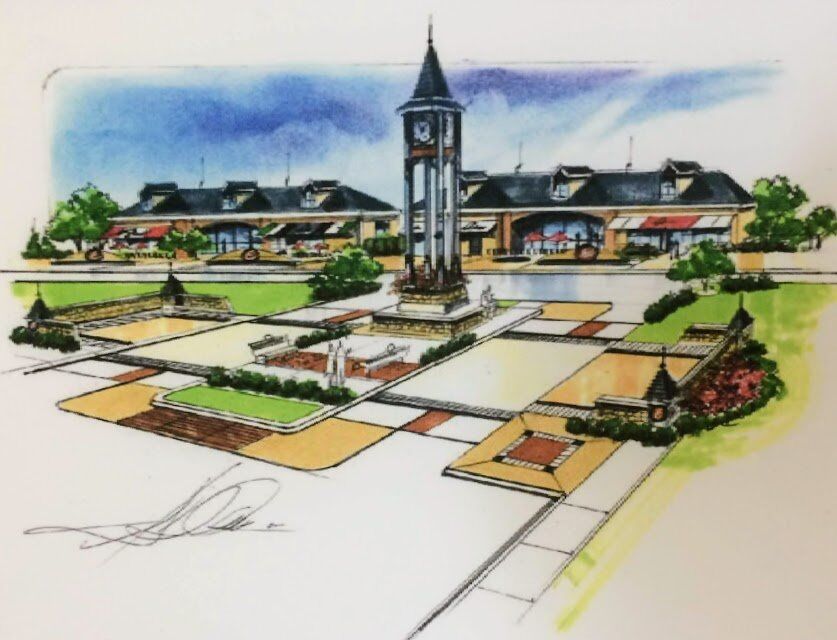 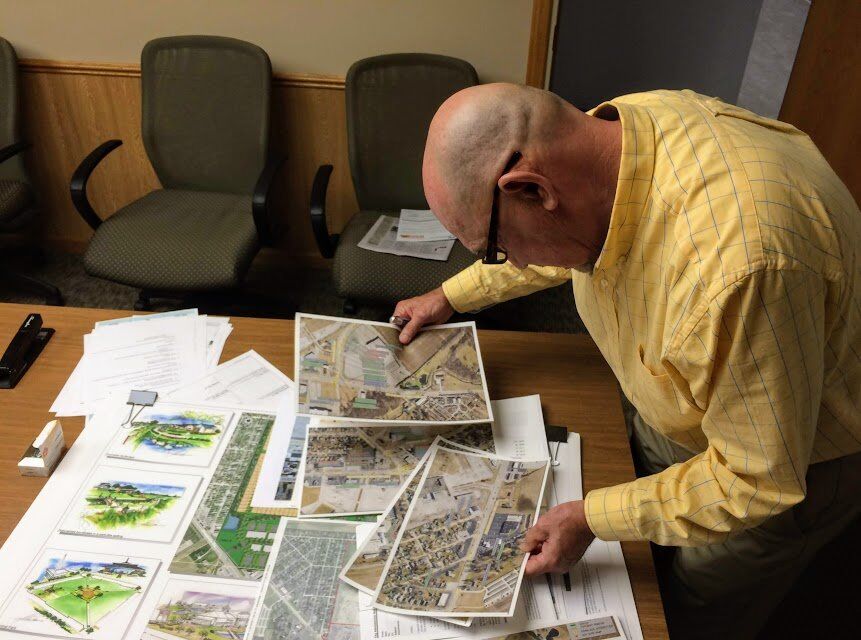 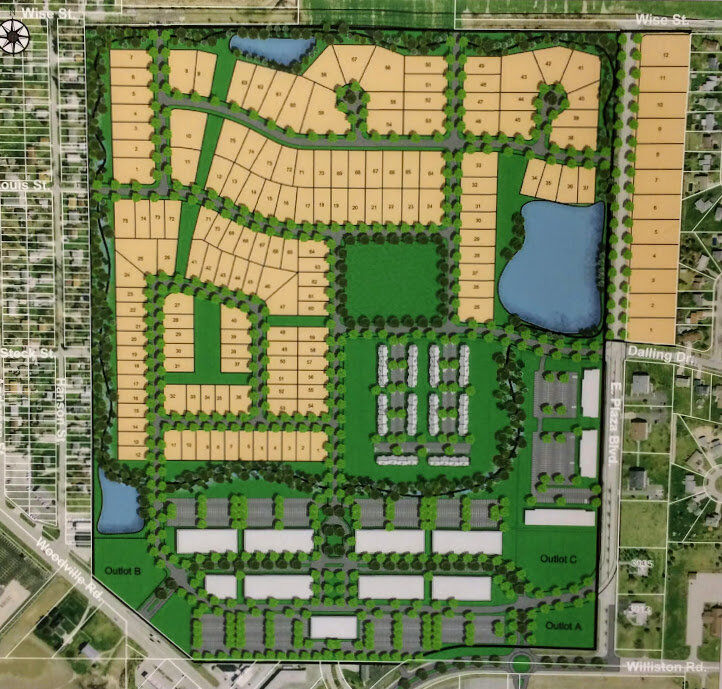 "The Enclave," a development proposed for the former Woodville Mall in Northwood, Ohio, includes a band of retail buildings, at bottom in this drawing. The more than 120-acre space would be dominated by a mix of housing. 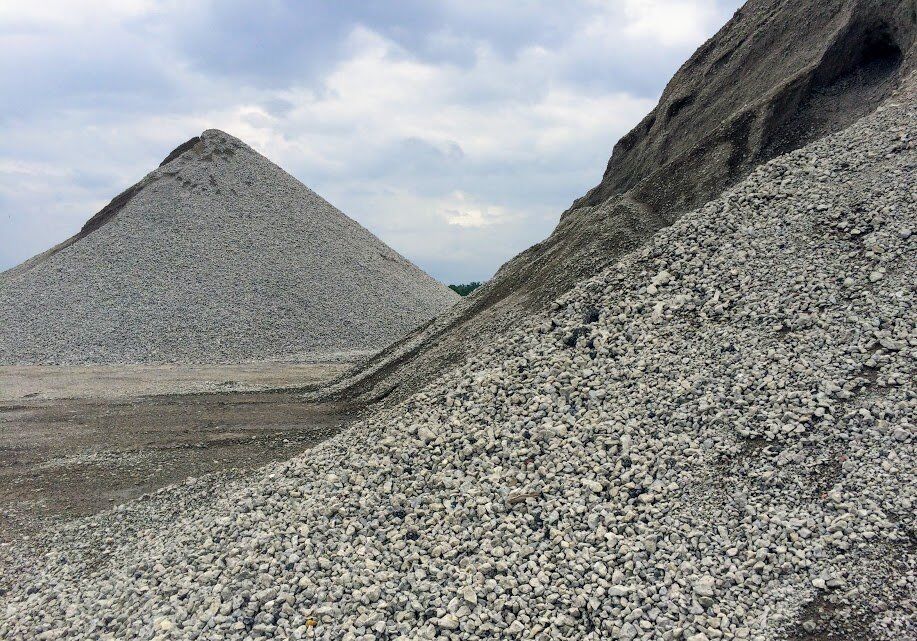 Not gravel, a ground-up mall. These piles are all that remains of the foundation of the former Woodville Mall in Northwood, Ohio.

"The Enclave," a development proposed for the former Woodville Mall in Northwood, Ohio, includes a band of retail buildings, at bottom in this drawing. The more than 120-acre space would be dominated by a mix of housing.

Not gravel, a ground-up mall. These piles are all that remains of the foundation of the former Woodville Mall in Northwood, Ohio.

They came. They conversed. They clicked.

Not their heels, like Dorothy in that movie, but with the same hope. Using electronic gizmos — ahem, “audience response system” — residents of this little northwest Ohio city clicked to flag things they liked, as if flipping through an in-flight magazine.

Or didn’t like as much, as officials laid out a vision.

Folks in Northwood, Ohio, were voting for elements of what could come next, after their mall hit the skids under the firm that owns the Berkshire Mall.

As I travel Mike Kohan’s sick-mall empire, my notebooks are filling with testimony about what’s gone wrong at places his company once owned or does still — and I’ll share these accounts in coming days.

The tattoo artist whose ink supplies froze in an unheated shop. Checks to mall workers that bounced. Tax payments that bounced. The mattress store owner who paid to haul his own garbage away, and to fix the rooftop air-conditioning unit, then deduct it from his rent.

Frustrated tax collectors, fire chiefs, mayors, administrators, and utilities. And distressed family-owned shops and their customers. People unwilling or unable to give up on a mall circling the drain.

At one place, I found a ribbon of freshly cut grass beside acres of cracked pavement. Sick of the unkempt scene outside, a tenant fired up a lawnmower, I was told, so the place didn’t look, as another tenant told me, “like Berlin in 1945.” It wasn’t enough.

But after speaking with people in Northwood, I decided to cut to the end and look ahead, as they now must. What is it they hope to conjure up here?

Before developers leap, they consult bankers.

Before cities and towns leap, they talk to their people. That means taxpayers. Northwood officials held meetings to gauge how residents felt about new uses for the old mall’s land. The city had paid $200,000 for it at a “sheriff’s sale” in 2016, five full years after a judge shut the mall down after determining it wasn't safe to enter. The property had last transferred for $800,000, when sold in 2012 to a firm called Ohio Plaza Shopping Center LLC, according to local media reports. Officials believe Kohan remained a principal.

Similar meetings may lie ahead for Lanesborough, home to the Berkshire Mall, as the town and the Baker Hill Road District face the prospect of losing nearly $1 million a year in mall tax revenue. It hasn't been easy money for years, since Kohan arrived. The mall has faced a 1 p.m. deadline  Wednesday to pay around half a million dollars to the Baker Hill Road District, which has legal authority over the site; the town itself is owed more. In all, Kohan's company has been $921,824.25 in arrears for this fiscal year.

Northwood put the "what next?" question to residents three times. The last meeting was April 9.

Answer: To redevelop the former Woodville Mall, the region’s first enclosed shopping center when it opened in 1969, but now an empty 120-acre plain of pavement, rusted rebar, grass and weeds.

“Great location,” the slide said. That seemed a natural bullet point for this hometown crowd. The property sits on the city’s busiest commercial route, southwest of downtown Toledo, albeit in a region suffering a steady manufacturing decline.

But developers, I think it fair to observe, aren’t excited by ideas for ideas’ sake.

Taxpayers at earlier meetings, clicking away at a “visioning session,” made that very point.

When asked whether they would support developing the property “in a manner best defined by the market,” 65 percent said yes. But they weren’t going to give it away, or lose their longtime connection. Even more of them, 76 percent, felt that whatever happened, a portion of the property should have a public purpose.

A photo shows a full house in the city’s meeting room, which doubles as a courtroom. Instead of cellphones, people held those clickers — as big as phones but with actual buttons. The votes were nonbinding but probably satisfying. No one had asked for their opinions about the mall in years.

Residents definitely have skin in the game. As I reported earlier for this project, Northwood used more than $2 million from a state loan fund to clear the site. The city must pay it back. Kohan was already out of the picture.

That’s big money for a community of 5,200 — about a thousand fewer residents than live in Great Barrington.

To make another Berkshire County comparison, the Woodville Mall sat right smack dab in the middle of Northwood, not up a long road away and surrounded by woods, as is the case with Lanesborough and the Berkshire Mall. Instead, imagine 120 acres bulldozed at the edge of downtown Adams. Then imagine that town's picturesque downtown is gone. The empty space might seem even emptier.

The Woodville Mall demo took forever. Each delay raised anew the question of what comes next.

For months, crews in hazmat suits labored to remove asbestos, spraying water to keep loose bits from drifting. In winter, that water sometimes froze, the city administrator told me, turning the mall’s dark passages into a skating rink as crews worked aloft, scrapping at the ceiling.

But that’s the bad old days.

Eventually, Northwood did its gut check on this land, just as cities and towns in this predicament must. The verdict here: Invest even more public money to attract private development.

They paid for consultants, who came up with  “The Enclave,” a mix of ventures that leans heavily on housing.

Now that people have given the green light to the city, Bob Anderson, Northwood’s administrator, is working with others to scout interest among developers. He can deploy a small arsenal of tax incentives to reduce startup costs. But the city is just one of countless parties chasing people with money around here.  If the old saw "success breeds success" applies to commercial development, Anderson has a heavy lift.

“The Enclave” calls for some retail development, since people expressed a desire for places to go out to eat, or shop locally. The mall was pretty much it for Northwood shopping — serving as the city’s defacto downtown. Today, a large strip plaza to the east is home to one store selling agricultural goods, including clothing.  The old Food Lion across Woodville Road stands empty, dark, rectangular and mute like a facade in an old western.

On the old mall grounds, the concept, with apologies to comedian Steve Martin, is this: “Let’s get small.”[cqmedia layout="panel" content="eyJwaG90byI6W3sibWVkaWFfdHlwZSI6InBob3RvIiwicGhvdG9faWQiOiIxNTkwMzAiLCJwaG90b19jYXB0aW9uIjoiIiwicGhvdG9fY3JlZGl0IjoiIn1dLCJ2aWRlbyI6W10sImZpbGUiOltdfQ=="]

The city plans to invest in infrastructure improvements at the far eastern edge of the mall land. It hopes by laying pipe and getting everything in but asphalt to tee-up a new street.  If things advance, that new street could house several small buildings with individual retail tenants.

“I don’t think we’ll ever have a mall like this again,” Anderson tells me, sitting at a conference table with maps and documents detailing “The Enclave.”

If a developer bites, the idea, at least now, is to use most of the property for housing of all kinds, and all ages. Anderson says he has to keep reminding people that sketches in the slide shows, and on the poster displayed on an easel in the lobby of the city building, are just suggestions. Developers decide what actually goes forward, if and when that day comes.

People talk about creating a place that could be a first home for young couples who might, some day, switch to “aging in place” homes. All right here; "circle of life" stuff.

One of those people is Dan Mikolajczyk, a neighbor and former city councilor.

He’s happy with what's on the table.

People didn’t seem to like the idea of allowing a manufacturer onto the site, including a company supplying materials to a new Jeep plant about five miles away. Some said truck traffic on Woodville Road would post a safety threat by a new city school.

People were not interested in gigantic ventures for the place. That's a mall hangover. “Nobody wants anything bigger now,” he told me, when I found him walking near the north side of the tract. He sat through countless meetings.

“Senior living is a hot item,” he says.

Though he's a practical Ohioan, not one to fall for “planning initiatives,” Mikolajczyk seems moved by the idea of creating something his city just doesn’t have: a place to call downtown. A rugged little magnet able to give a rust-belt community a new civic shape.

“It’s a little bit of everything there. It’s a good concept,” Mikolajczyk says. “It’s a gamble. Everybody knows it’s a gamble.”

NEXT:  Unhappy tenants take the gloves off at a mall that's nearly at rock bottom.

Larry Parnass, investigations editor for The Eagle, can be reached at lparnass@berkshireagle.com.