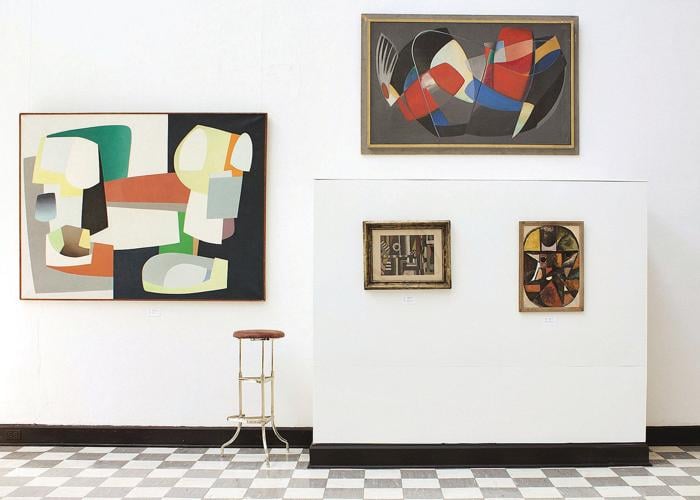 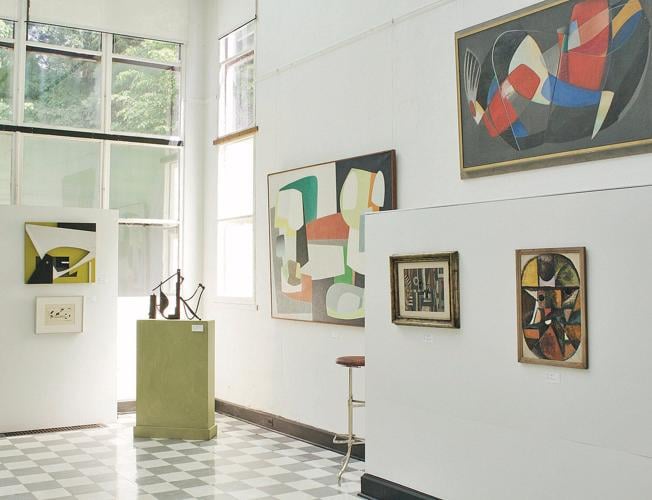 LENOX — In 1937, the American Abstract Artists held their first group show in the Squibb Gallery in New York City.

The show would attract 1,500 viewers over the course of its three-week run, but the art critics were not kind.

"Here their adventuresomeness stops; all too often the canvases recall Picasso, Miro, Braque and other experimentalists among the moderns. Therefore, these painters have merely broken from one formula to follow another ...," critic Jerome Meliquist, of the Brooklyn Daily Eagle, wrote in an April 1937 review of the show. "The value of such an exhibition as this is that it may encourage some young painter to go ahead and achieve that individuality which the group as a whole now lacks."

But George L. K. Morris and Estelle "Suzy" Frelinghuysen, abstract artists themselves, saw value in the paintings of their peers. Morris, a founding member of the American Abstract Artists and an exhibitor in that first show, purchased 10 pieces.

The works were carefully tucked away in the couple's collection, hidden away from public view until recently, when the Frelinghuysen Morris House and Studio opened its summer exhibition, "American Abstract Artists-A Collection-Unseen Works."

"The reason we say these are unseen is because they have been in [the FMHS] collection for 30 years and before that, in George's closet, from the time he bought them until his death in 1975. Some of these haven't been seen since 1937," said Kinney Frelinghuysen, director of the Frelinghuysen Morris House and Studio in Lenox.

Suzy Frelinghuysen, Kinney's aunt, established the Morris Foundation before her death in 1988. It was her wish to keep the couple's house and studio in Lenox, as well as the majority of her and her late husband's assets, intact. Kinney Frelinghuysen and his wife, Linda, opened the Hawthorne Avenue house and studio to the public in 1988, offering tours of the historic International Style house and white-stucco walled studio. Their art collection, once spread across three properties — in Lenox, Paris and New York City — is now together, along with letters, sketchbooks and works belonging to George and Suzy.

The show is a reminder that not only were George and Suzy artists, but they were advocates of abstract art being included in major museum collections. Both were members of the American Abstract Artists. Morris also wrote criticism for the Partisan Review and purchased art for the Modern Museum of Art.

"At the 1937 show, we think that he bought 10 paintings. That was very typical of him, as he bought things that were inexpensive, that nobody wanted but turned out to be very good," Linda Freylinghuysen, FMHS communications director, said during a recent interview. "He was on the MoMA Advisory Committee. He would buy them things, like a [Piet] Mondrian, and then he would buy one for himself."

In addition to the 10 works of art, Morris also purchased lithographs created for the 1937 show catalog. Those lithographs — created by the show's artists as companion pieces to the works on display and sold for 50 cents a piece — are included in the FMHS exhibit as well.

But try as they might, George and Suzy could not convince American art critics of the value of American abstractionism.

While American critics and museums focused on the genre of social realism and on abstract art coming out of Europe, the American Abstract Artists focused on making their art accessible to the masses.

"They believed abstraction was a democratic idea and no expertise was required to understand it," Linda said. "George said in an interview: 'Abstract paintings are a logical beginning. They are not puzzles. They are not difficult to understand. They need to be looked at as one might look at a tree or a stone itself, and not as the representation of one. They stand with the independence of architectural shapes and through very simple means, a whole new window is opened.'"

Teaching audiences to view abstract art, as the artists intended, is part of the mission of FMHS, she said.

"George didn't think you had to be an expert," Kinney said. "This is every man. If you look at it and get something out of it, that's it ... The issue today, is that people see these high auction prices for a Picasso. They think, if it's that expensive, everybody else knows what its all about and I better pretend I know too. That's a misfortune. I think this whole building [the studio] helps you go the other way. There's a language here and that language is for you."

Following the house tours, visitors are invited into the studio to not only see the exhibition, but to participate in a drawing exercise designed to help them view the pieces not as figurative works.

"You can figure it out for yourself," Kinney said of the abstract pieces. "You know what it is. George likened it to architecture. You don't need an explanation of what a building is — you know what it is intuitively."

It's the same with abstract art, he said.