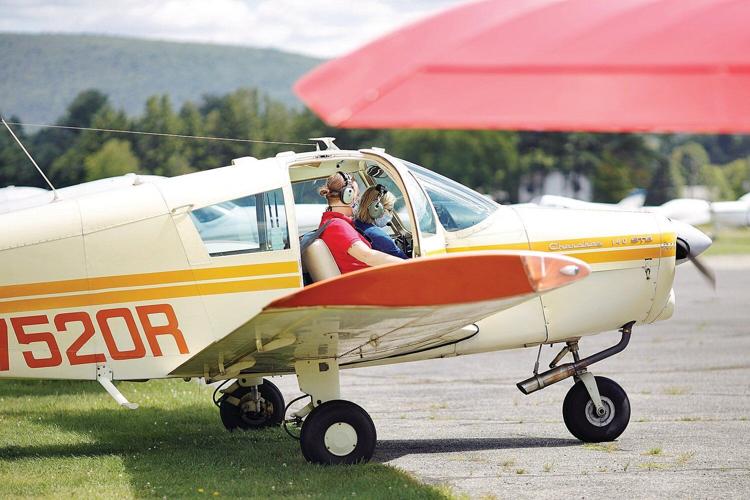 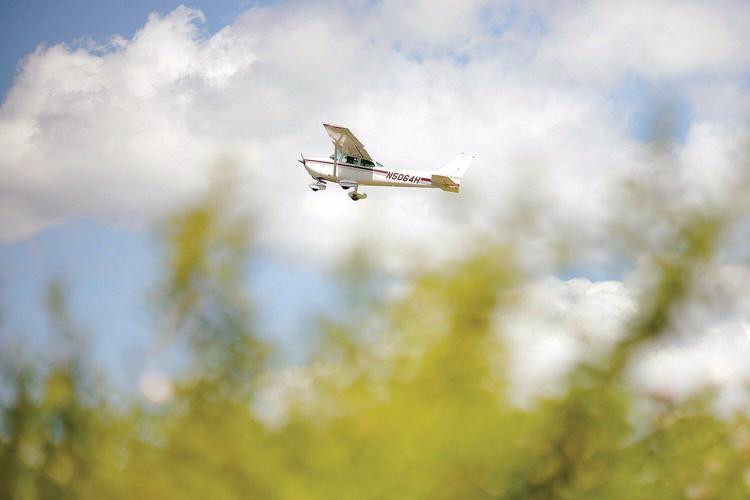 An airplane takes off from Walter J. Koladza Airport in Great Barrington on Thursday. 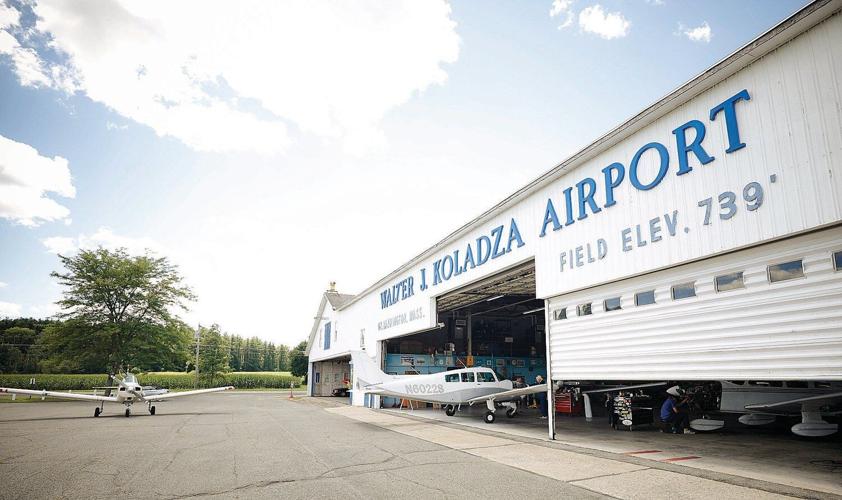 Planes line up outside of the maintenance hangar at Walter J. Koladza Airport in Great Barrington on Thursday. 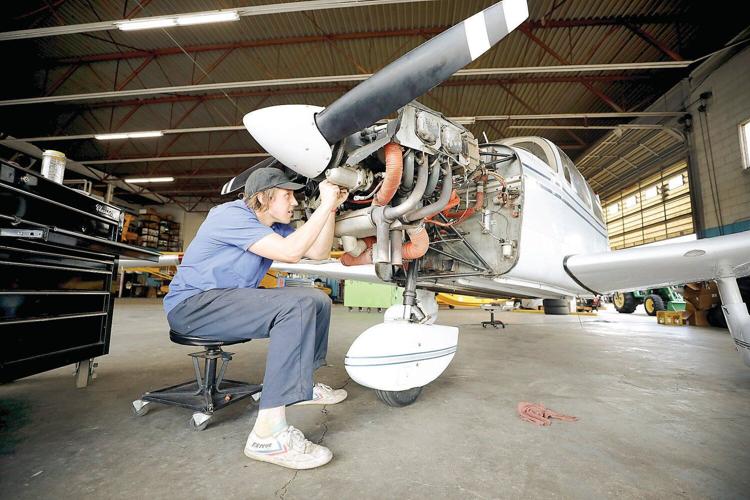 Nick Bloomstein works on the engine of a Piper Warrior II inside of the maintenance hangar at Walter J. Koladza Airport in Great Barrington on Thursday.

An airplane takes off from Walter J. Koladza Airport in Great Barrington on Thursday.

Planes line up outside of the maintenance hangar at Walter J. Koladza Airport in Great Barrington on Thursday.

Nick Bloomstein works on the engine of a Piper Warrior II inside of the maintenance hangar at Walter J. Koladza Airport in Great Barrington on Thursday.

GREAT BARRINGTON — Curtis Wood climbs out of a Piper Cub near the airport office, beaming like a kid. He's getting certified to fly the World War II-era plane.

The Greenwich, Conn., real estate broker, now 62, was 5 when he learned to fly. He's better versed at the controls than the Bible. He never made it to Sunday School when his father, a pilot, was driving.

"Dad would keep going past it, right to the airport," he told a few others on a sunny Thursday morning at Walter J. Koladza airport. "This is my love. Jumping out of planes and flying."

They laugh, because they all understand each other here on what, in 1909, was a potato-field-turned grass air strip and designated as an airport in 1923, according to its owners.

A program in the The Berkshire Courier lists exhibitions at the 1931 dedication event to include stunt flying, like an "air race around the dome" of Mount Everett, and "bomb dropping."

The airfield is known around New England for its top maintenance shop and flight school that's turned out thousands of pilots since "Walt," as he is still known, started training them during WWII.

But now a storm cloud looms amid a plan to build hangars for storage of airplanes, most of them now tied to the field. Some nearby residents initially opposed the buildings. But that has curdled into an argument against the very existence of the airport here amid farmland and houses. And in letters circulating town email groups ahead of Monday's Select Board hearing for a special permit that would allow the hangars, they have cast its two owners as ill-intentioned liars with secret plans for expansion, with town officials in cahoots.

The owners explain that their 100 acres are landlocked by two roads and abutting property, and that environmental regulations are strict here.

Solan, who grew up in and still lives in Canaan, Conn., is the majority owner and teaches here full-time. The pandemic forced him to retire a few months early from his 36-year career as an American Airlines pilot.

Not much else has changed, except the medevac helicopters that regularly land here for flights to the larger hospitals to the east or west. As a privately owned airport for public use, the National Guard occasionally trains here at night, as do local police and fire departments.

Inside the 1930s-style office off Route 71, there are snacks, maps, and a big couch. Pilots sound in on the flight radio. Misty the standard poodle leans in for a scratch. Someone shouts to Solan. Does he want coffee?

Outside, the maintenance shed is humming. Flight students are coming and going from lessons with Solan and Dana Davidsen, a former software engineer who, as a kid flying to Texas, thought, "I have to know how this works." Pilots are stopping in to check on their planes, or they're traveling, or some flew here for maintenance.

Great Barrington businessman Richard Stanley, a frequent flier who pilots to Mexico every winter, is standing next to his Cessna 340, parked near the office. He stopped by to update his navigation software.

Jim Sok, of Lakeville, Conn. just landed, and he's excited to talk about how Koladza was one of his instructors in the 1970s, just as he was for Solan.

Everyone is looking forward to the evening party for Jessica Phinney, 29, a trauma nurse studying nursing anesthesiology, and considering a career as a medevac pilot. She earned her private pilot certification on Wednesday.

Solan's son Joe, 22, also a pilot, is rushing around, moving airplanes, and making sure the place is running smoothly — he's general manager. Like his father, he started out as a line boy here.

While some abutters have pointed to a host of concerns since the first hangar plan was unveiled, letters now circulating in town email groups are throwing in extra, false charges that range from illegal waste disposal to "two crashes" since 2017 (there have been none apart from one plane that slid off the runway over a snowy embankment due to pilot error, according to the National Transportation Safety Board).

Others say there's a scheme with the town to expand as a municipal airport for which it will seize property through eminent domain. Select Board member Ed Abrahams said that in his six years on the board, he has never heard anyone speak of such a "plot."

After the initial plan was dropped due to push back from neighbors, Solan and partner Jim Jacobs, an art dealer who lives mostly in Egremont, modified those plans last year, and are again seeking a special permit that would bring the airfield into zoning conformity. This would allow Berkshire Aviation Enterprises, Inc. six new hangars that would hold up to 36 planes in private garages. Their engineer says the plans were changed so as not to be an eyesore to abutters. He also says the hangars will resolve contamination concerns, since keeping the majority of planes indoors on concrete instead of tied to the field protects the ground from leaks and storm runoff.

The town Planning Board says the hangar plan is sound, after considering a slew of concerns, including potential threats to groundwater, since the airport sits on the same aquifer that runs from Housatonic to Connecticut.

The Planning Board also wants the Select Board to add conditions for further protection, and a traffic study. If the airport gets the permit, it will have to go through the Planning Board's rigorous site-plan review.

When zoning laws hit the books in 1932, the airport would continue to exist as a "nonconforming, preexisting" entity amid farmland where, over the years, more houses would pop up, as well as a few other businesses and a school.

Those who make the town's zoning laws have publicly expressed their weariness with residents who bought or inherited homes near the airport, and now try to make the case that it shouldn't exist.

Others point to the importance of medevac flights, and cash that flows into town from Berkshire visitors and regular pilots like Sok, who likes to shop and eat here when he passes through.

The town's Master Plan backs this notion. So does the state's 2019 airport economic study. It says Koladza plunged about $5.2 million into the economy that year, although likely less, since Joe Solan said the number of employees listed in the report as 56 is "wildly inaccurate." The airport currently employs 12.

But in a letter to town officials, a longtime Planning Board member who has recused himself because he is an abutter, said neighbors are spreading misinformation on a number of counts, including charges that the airport will not add to town coffers — Jonathan Hankin said taxes on the new hangars will increase "substantially."

And Hankin thinks the board should grant the permit, so that it can help shape the hangar proposal, since the airport isn't going away.

Rick Solan says the airport can't expand, though in the past the owners have had "grand ideas" of a cafe addition near the office.

New hangars also would bring in some much-needed revenue, mostly from existing pilots. Keeping them out of the elements would add another layer of safety, say pilots and engineers.

Joe Solan walks back to one of the old hangars, where aircraft are packed tight without touching. He explains the problem: this morning he had to move five airplanes to pull out the one in back. He does this many times a day for those who pay for the available shelter. He's "never dinged one up," having moved planes since he "was tall enough." But there is risk.

"They worry about their planes being moved every day," he said, pointing at a silver Cirrus SR22, valued at around $1 million.

Despite that, the airport community mostly is "not full of people with tons of money," but those propelled by a passion for flying and the feeling of freedom.

Noise from low-flying planes is at the heart of neighbor irritation. Both Rick and Joe Solan say it's a legitimate complaint — especially during summer when people are outside more, there's more flying — and at initial lower altitudes due to warm air.

They say they work hard to resolve it with homeowners who call, though some neighbors say this isn't the case.

Runway signs direct pilots to take a turn at a certain altitude to avoid passing over clusters of homes. They also try to limit takeoffs and landings early on weekend mornings, and instruct pilots to do most of the flying over less populated areas over the New York border.

"We're trying to be conscious," Rick Solan said, noting it's been busier than usual because of a backup of pilot certifications during the initial pandemic lockdowns.

He says he can't always solve it. Sometimes student pilots can only train in the evening after work, or bad weather scrambles scheduling.

Solan says he wants to be a good neighbor, since this place is everything to him. Earlier, Joe Solan had said that retirement and the death of his mother — Rick Solan's wife — has sent his father deeper into his love of teaching here.

In the office, Rick Solan says he also loved to train pilots to fly the Boeing-777.

Airport regular Ken McGahren, of Pound Ridge, N.Y. overhears this. Like everyone here, McGahren is dismayed by all the accusations flying around, and says, of Solan, "He's a triple seven captain who comes back from London and hops in the Cub and says to me, `Now I'm really flying.'"