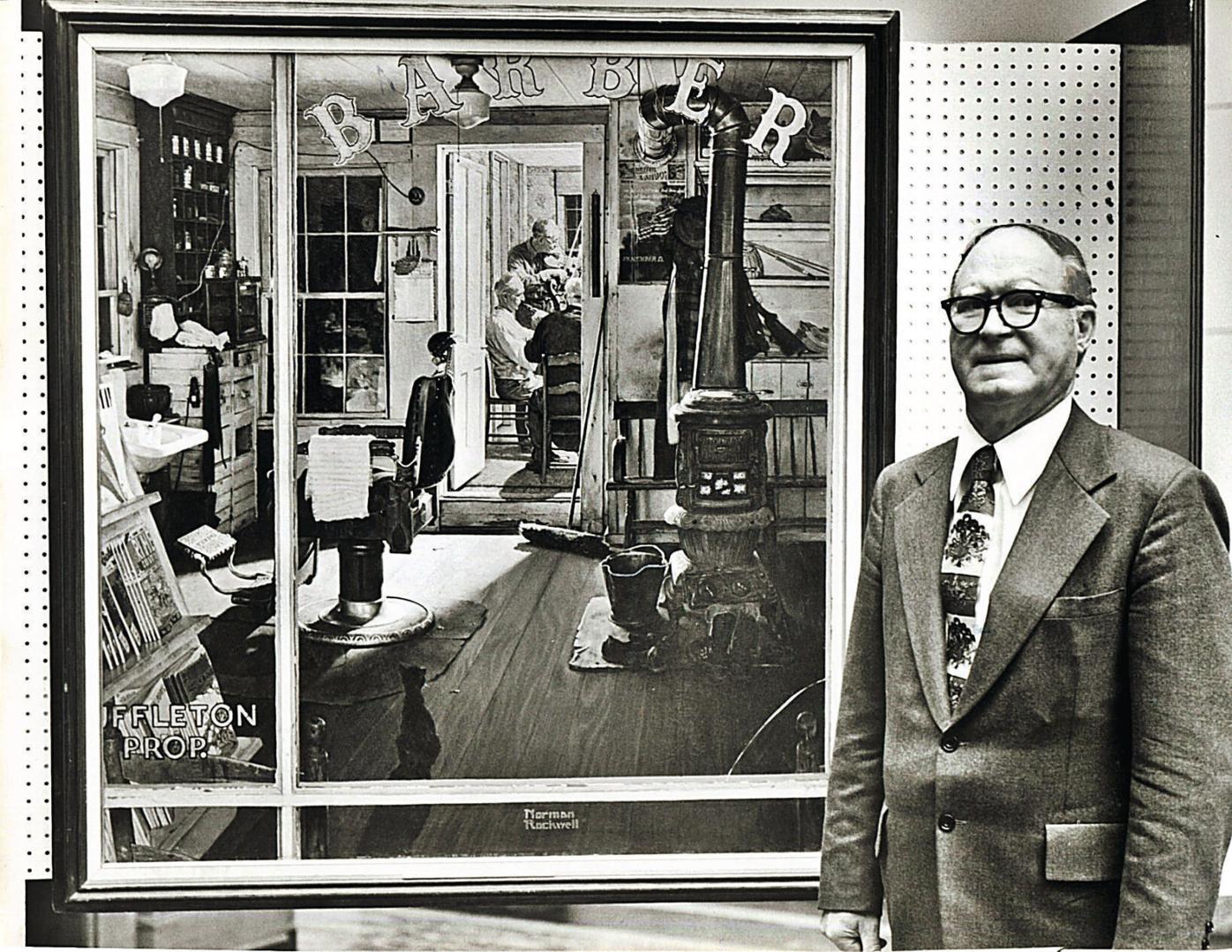 Stuart Henry, director of the Berkshire Museum, with "Shuffleton's Barber Shop" — one of Norman Rockwell's favorite paintings on Nov. 10, 1978. 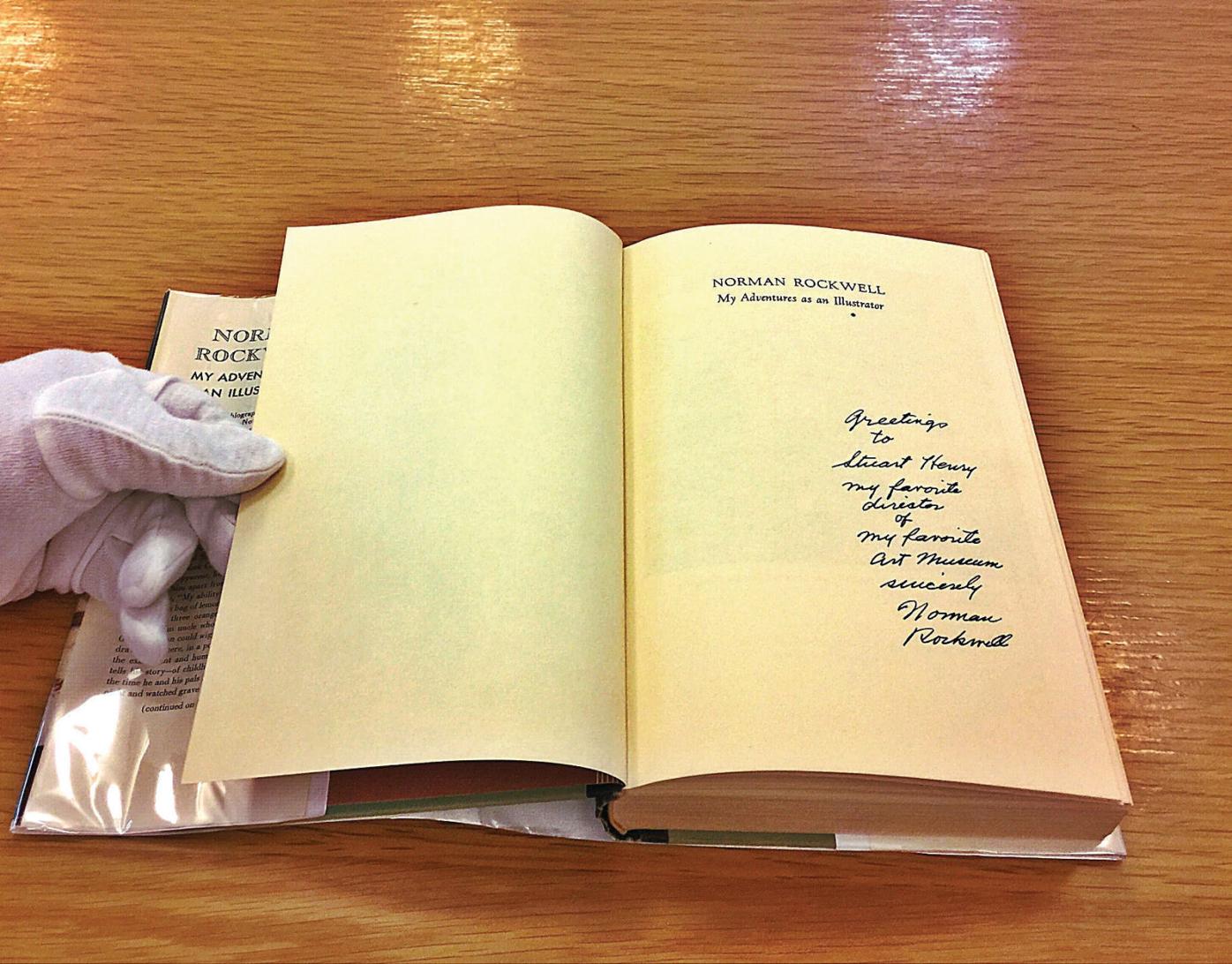 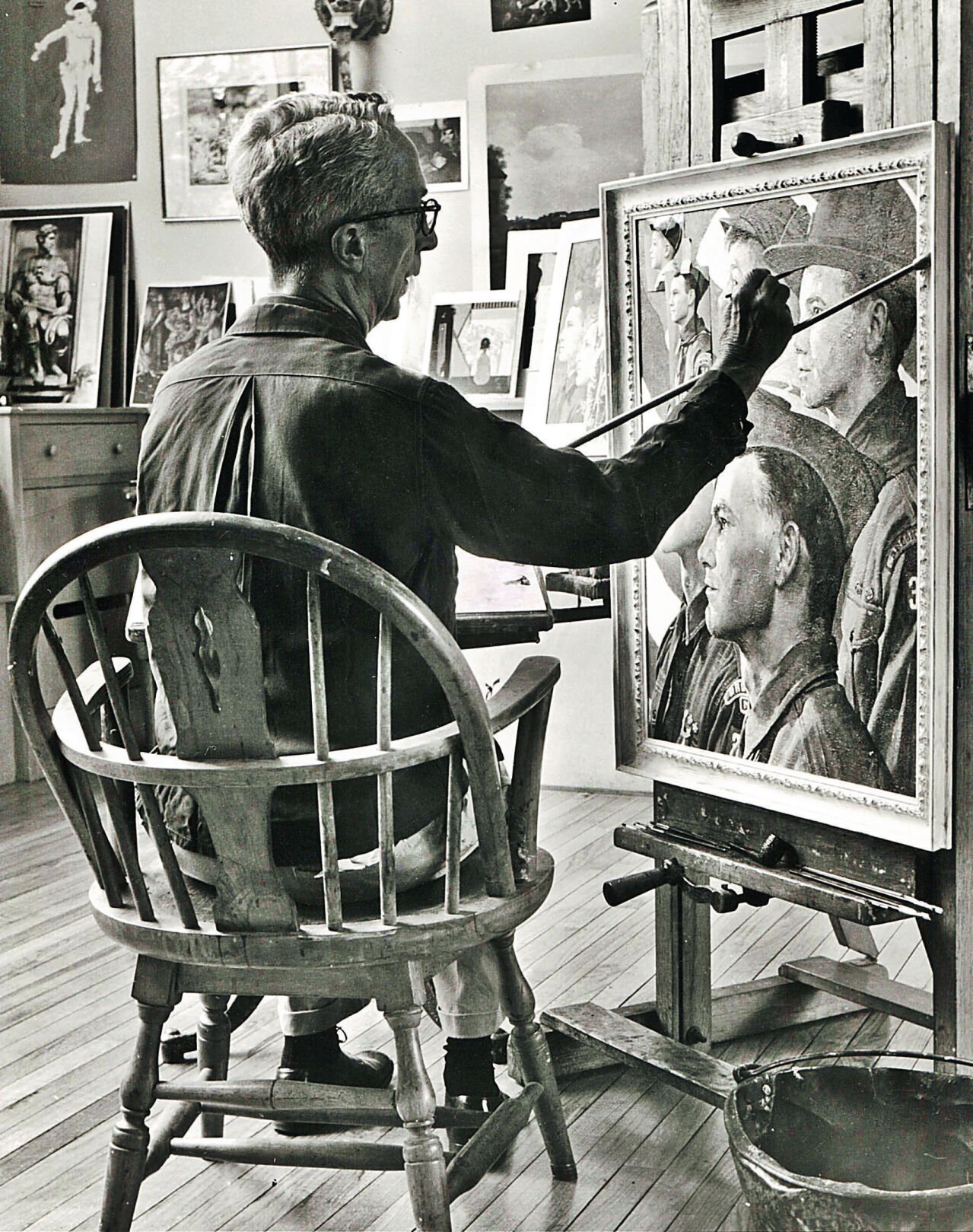 Norman Rockwell paints in his studio. 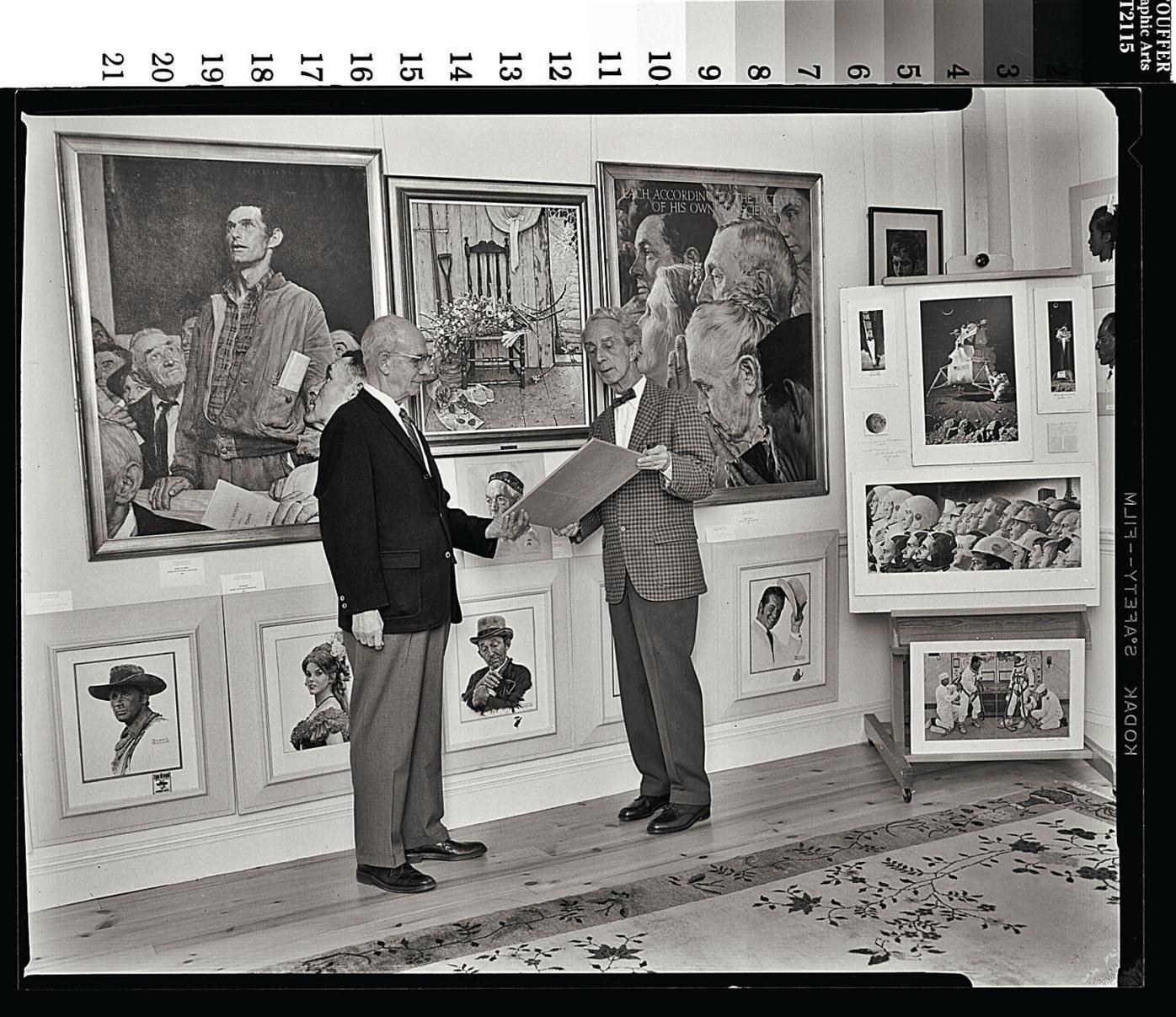 Stuart Henry, director of the Berkshire Museum, with "Shuffleton's Barber Shop" — one of Norman Rockwell's favorite paintings on Nov. 10, 1978.

Norman Rockwell paints in his studio.

That's the arc of the nearly 25-year relationship, started in 1953, between artist Norman Rockwell and Stuart Henry, then the director of the Berkshire Museum.

Rockwell's admiration for Henry and the museum is well illustrated in a note the artist wrote, sans punctuation, in a copy of his 1960 autobiography, which he gave to the museum director:

Following Henry's death in 1991, the inscribed book was donated to the Norman Rockwell Archives in Stockbridge. It is one of the many documents there that mark the bond that formed between Rockwell, his paintings and the museum.

Henry was in charge at the Berkshire Museum when Rockwell donated two paintings, "Shuffleton's Barbershop" and "Shaftsbury Blacksmith Shop," to the museum in 1959 and 1966, respectively.

But some say the bond between Rockwell, Henry and the Berkshire Museum stands to be broken when his paintings, and 38 other works of art, are auctioned to help fund a $20 million renovation and provide a $40 million boost for its endowment. Museums typically only sell items to either expand or care for the collection it has.

But Van Shields, executive director of the museum, has said it is time to "change, move or die." And it intends to change — a choice that has drawn both support and opposition.

Laurie Norton Moffatt, director of the Norman Rockwell Museum in Stockbridge, was the first to call on leaders at the Berkshire Museum to keep the artwork and, instead, start a community conversation about alternatives to its plan. She said the Rockwells and other works have regional significance. She said that connection is more valuable to community members than the price they'd fetch at auction.

The Berkshire Museum expects to earn at least $50 million from the sale of the 40 works sometime this fall. Fundraising is expected to cover the balance of the $60 million "reinvention plan."

Berkshire Museum leadership has said it is listening to that feedback, and understands the concernexpressed by some, but more people support their plans than oppose them and it will forge ahead. Doing so will stabilize the museum, which its leaders have said is losing $1.15 million a year and will close within eight years without auction proceeds.

A planned renovation will help the museum better serve 21st century audiences interested in science and natural history. Museum leadership also has said art will remain part of its mission, but the 40 artworks headed to auction no longer align with its needs.

The possibility that the paintings Rockwell donated could be sold into private hands is one the Rockwell family said earlier this week that they oppose and the artist would also disagree with.

Rockwell and Henry first met at the "venerable" Monday Evening Club, according to a story published in The Eagle following Rockwell's death in November 1978. Although a date was not ascribed to that social call, letters between the two men obtained by The Eagle say they started gathering at events as early as May 1953.

Those letters chronicle experiences shared by Rockwell and Henry — including time spent at dinner parties, art exhibitions and other events — from May 27, 1953, until May 21, 1976 — two years prior to the artist's death from emphysema.

Henry, who retired in 1979, was Berkshire Museum's director for 39 of the 47 years he worked there.

The two often helped one another.

For years, Rockwell gave annual $100 donations to the Berkshire Museum. Henry let Rockwell store many of his paintings at the museum.

And Henry helped launch the space that would eventually become the first Norman Rockwell Museum.

A series of correspondence

Norton Moffatt said the artist's health was failing in the final years of his life, which is likely why the correspondence stopped.

Their letters began in 1953, about the time Rockwell moved to Stockbridge from Arlington, Vt.

"This is a very personal series of correspondence that suggest a deep friendship and a longstanding association between Norman Rockwell and the Berkshire Museum," Norton Moffatt said.

Many of the letters Henry and Rockwell exchanged are without response. Norton Moffatt said that's because the two would also have chatted on the phone or discussed matters in person.

In addition to his work at the Berkshire Museum, Henry helped launch the first Norman Rockwell Museum.

Henry was exhibits chairman of The Corner House, a community gathering space that would eventually become a museum dedicated to Rockwell's work.

In a May 21, 1969, letter to Henry, Rockwell discusses the opening of The Corner House, which was to include a display of Rockwell's paintings.

"As I told you over the phone, I am asking for quite a large number of pictures to be brought down" to The Corner House, "and then Fred can take back the ones you don't use," Rockwell wrote. "This way you will have a selection, because I would so much like to have a showing of the variety of the type of work I do."

The "Fred" referenced in the letter is Fred Holden, who worked as a courier for Rockwell. In this instance, Holden would have likely brought items from Berkshire Museum storage to The Corner House for Henry's use, Norton Moffat said.

She pointed out Rockwell donated his works, through an irrevocable trust, to The Corner House with the understanding that the collection remain together and available to the public forever.

According to the trust, if The Corner House ever disbanded the entire Rockwell collection was to be given to the Berkshire Museum, Norton Moffatt said.

Had "Shuffleton's" and "Shaftsbury" not been donated to the Berkshire Museum, Norton Moffatt said she believes they would have been donated to The Corner House, and therefore part of the Norman Rockwell Museum's collection.

Each of the artworks the Berkshire Museum plans to sell were "unrestricted and unencumbered" gifts, according to museum leadership.

When Rockwell moved to Stockbridge, he was balancing a busy professional life and personal challenges.

He had assignments from the Saturday Evening Post and other publications lined up for years. Meanwhile, the health of his first wife, Mary, was failing. They moved to Stockbridge in 1953 so she could be treated at Austen Riggs. She died six years later.

And despite those realities, Norton Moffatt said Rockwell still worked to establish a friendship with Henry and become a member of Pittsfield's budding contemporary art scene.

He spoke before the Pittsfield Art League and judged artist entries into the Berkshire Art Association.

"This important show admits artists from within a sixty mile radius of Pittsfield, in the center of the Berkshires, and will include both professional and amateur work," Henry wrote in a June 3, 1953, letter to Rockwell.

Rockwell even tried his hand at a more contemporary style, creating a drip painting that emulated the style of Jackson Pollock.

Norton Moffatt said Henry was among those who gently urged Rockwell to stick to what had made him beloved by many Americans — slice-of-life paintings and thoughtful portraits, which he created over his 60-year career.

While Rockwell's work would have been recognized and clamored for by many everyday Americans, it was also panned by art critics.

Both topics are covered in their letters.

"All the comments that I heard from the public and from artists were most favorable," Henry wrote Sept. 10, 1958. "I did not think that the News Week article did justice to your abilities and accomplishments."

When Henry wrote Rockwell in July 1974, Rockwell's health was failing and he had recently been in a bicycle accident. Norton Moffatt said the letter was meant to lift his spirits.

"We have both of your beautiful paintings — The 'Blacksmith Contest' and 'Shuffleton's Barbershop' — always great favorites, on view," at Berkshire Museum, Henry wrote.