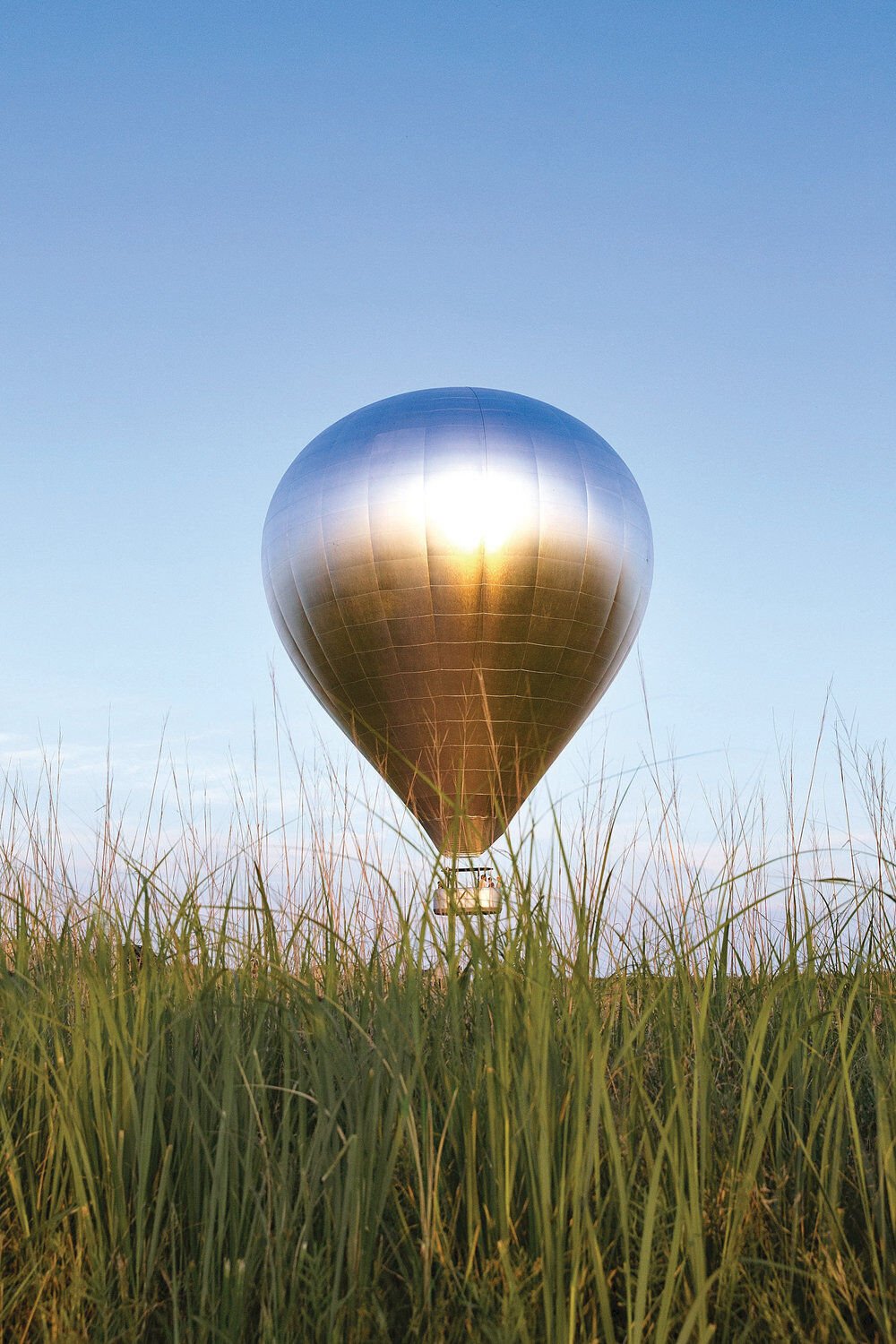 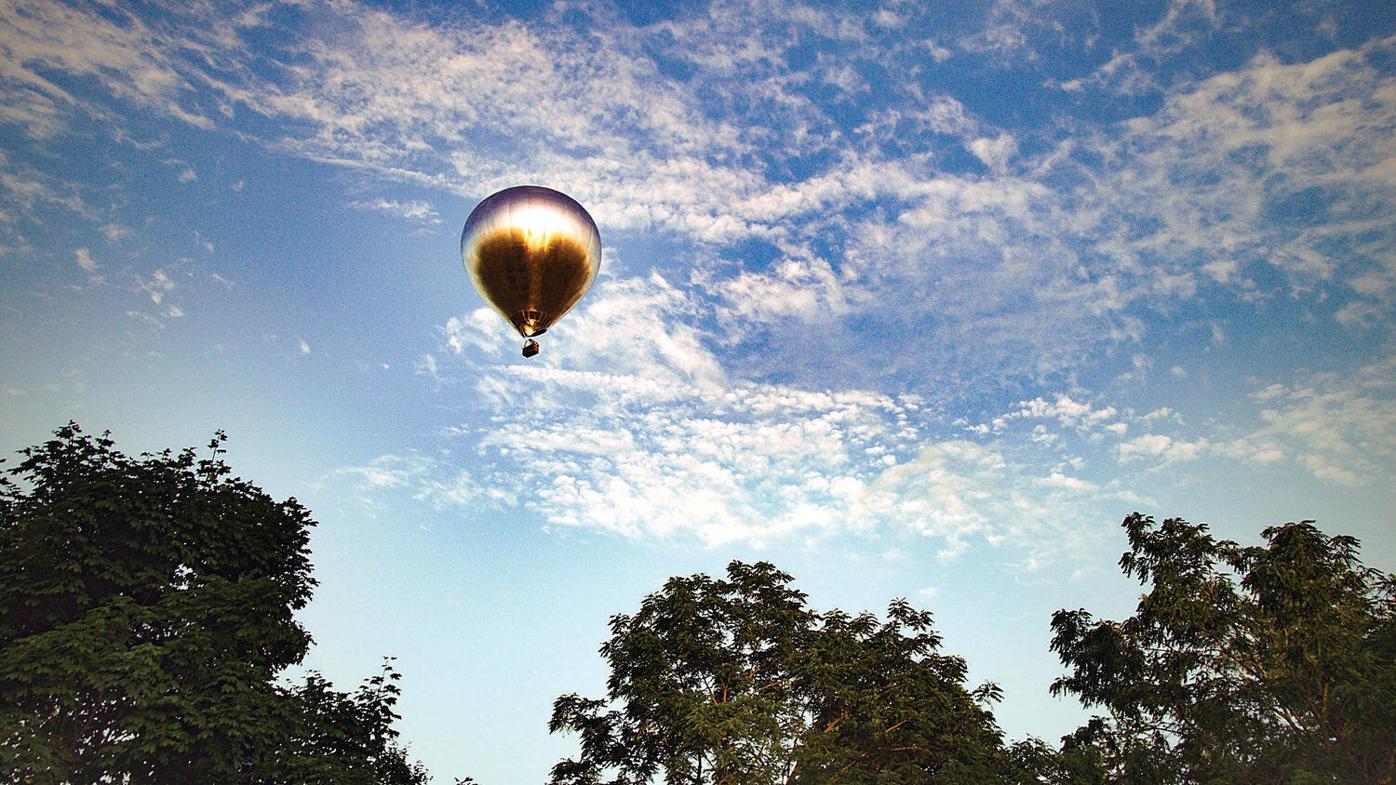 The mirrored balloon reflects the landscape surrounding it. 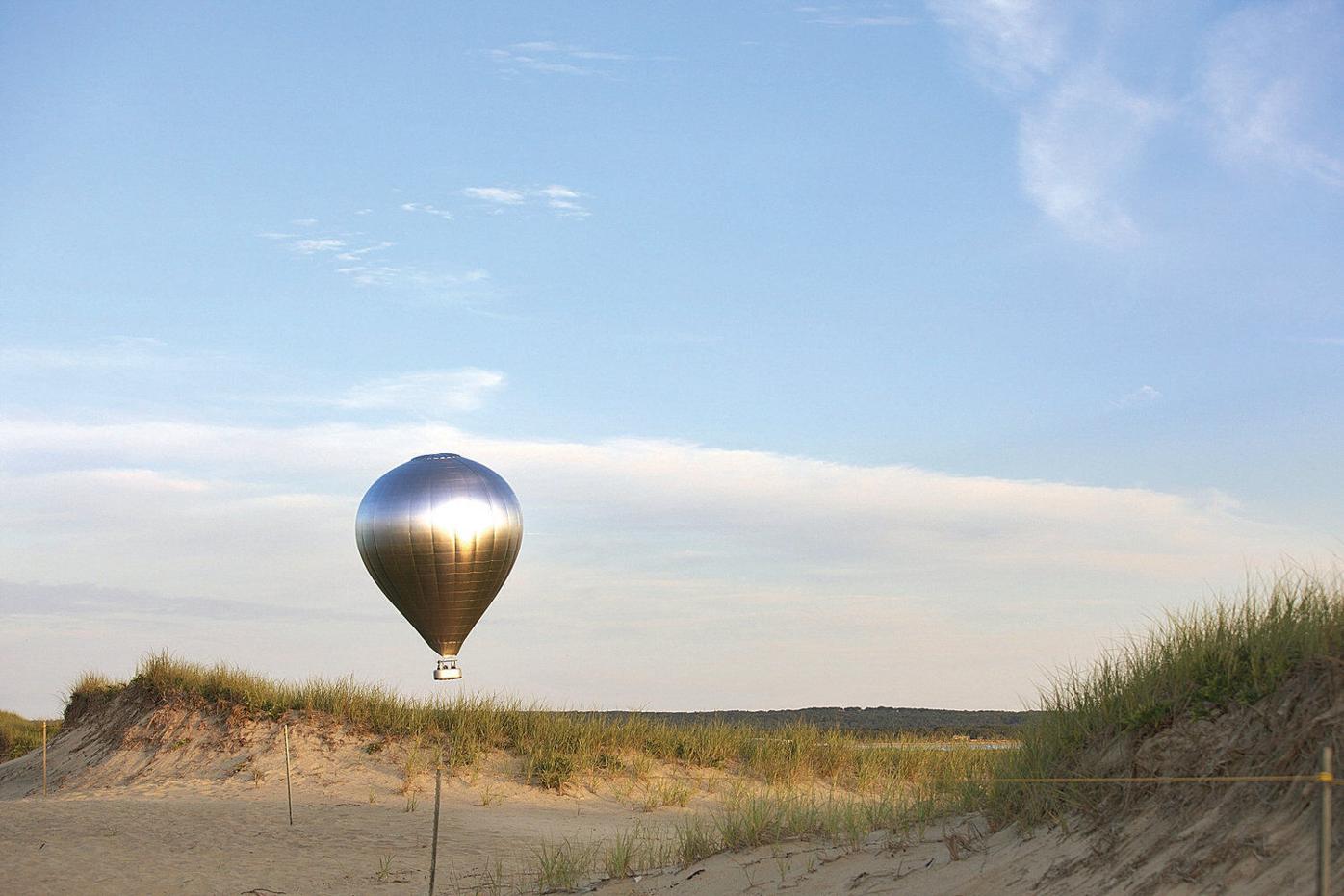 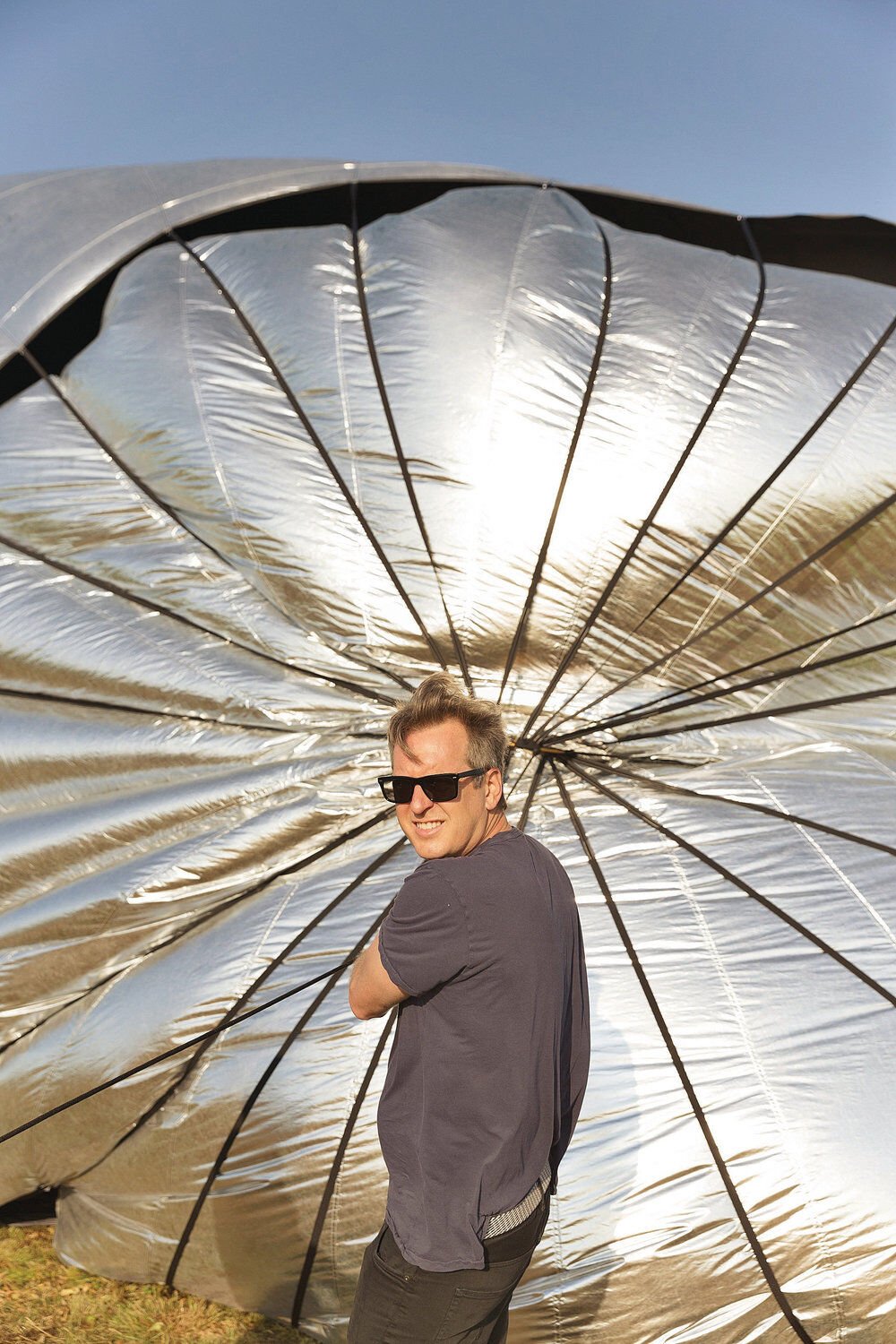 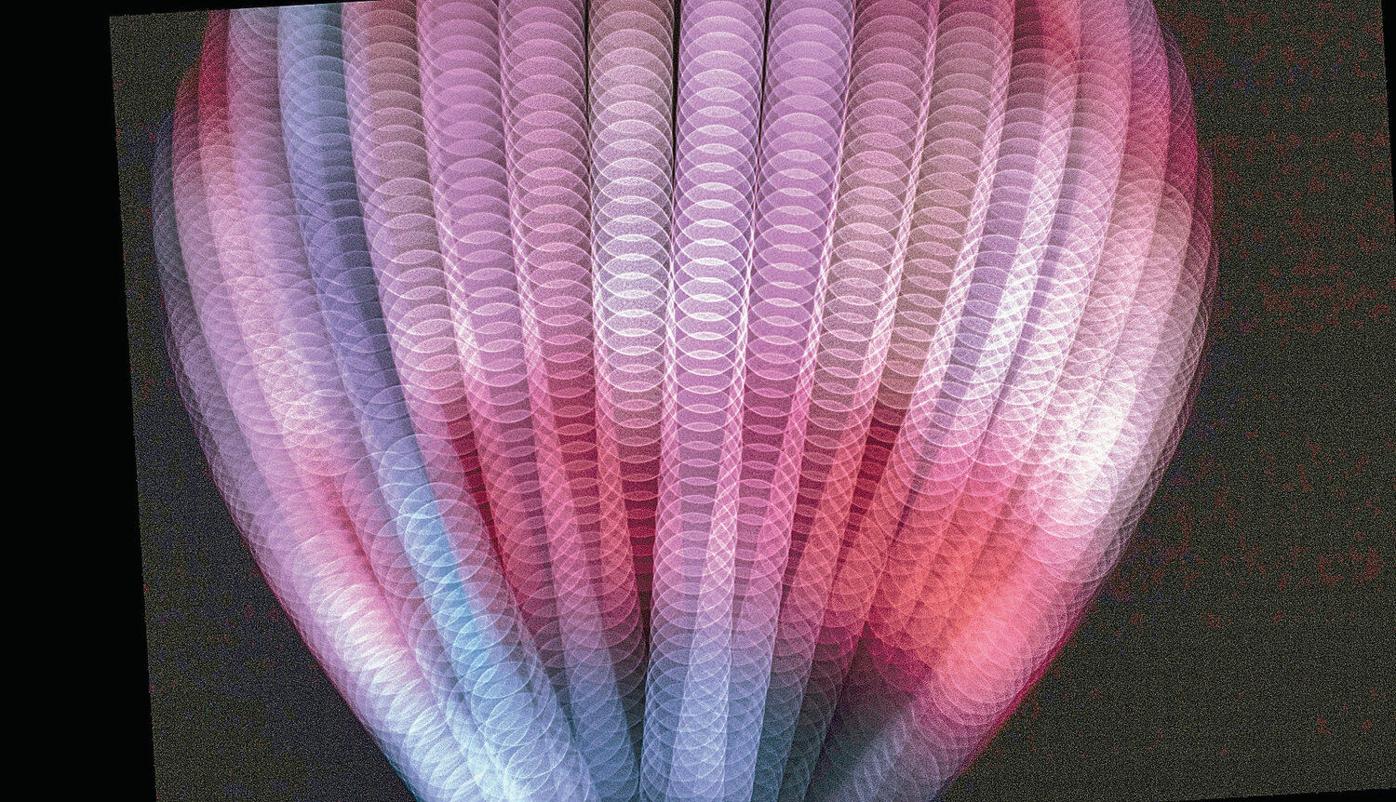 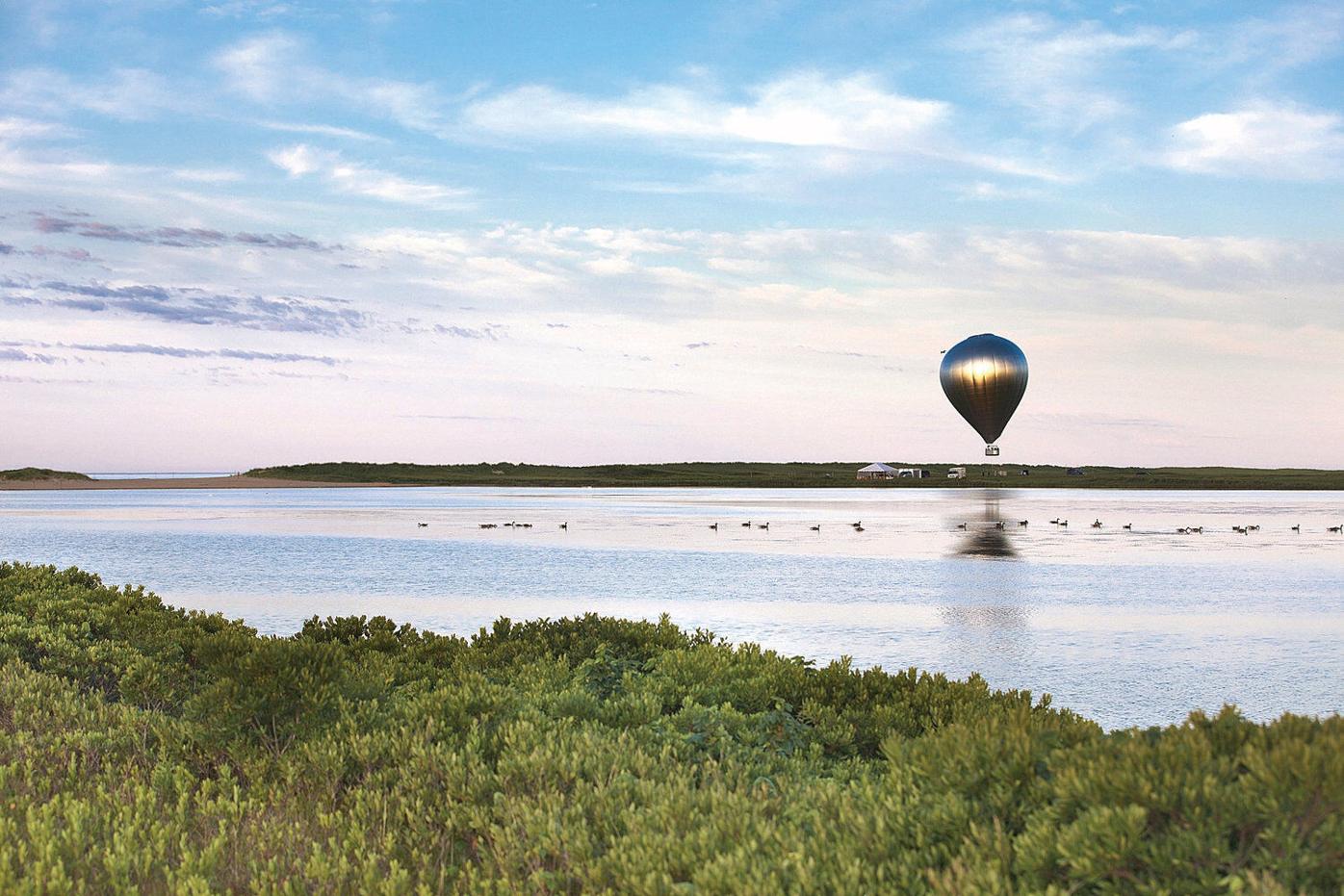 The mirrored balloon reflects the landscape surrounding it.

It started by the sea, tethered to Martha's Vineyard, its presence drawing prominent artists, musicians and more. From there, it was taken north, set to visit historical sites circling Boston. And in the coming days, it is heading west to rest amid the Berkshire mountains.

Doug Aitken's hot air balloon, "New Horizon," can be called a traveling exhibition, a means of travel, a studio and a cultural beacon. But perhaps the best description of the world-renowned artist's mirror-like, 100-foot-tall Mylar mobile sculpture belongs to Pedro Alonzo, the curator of The Trustees of Reservations' Art & the Landscape series.

"It's really a sublime experience," Alonzo said by phone recently of the series' latest installation.

"New Horizon" is in the midst of a seven-site Massachusetts tour through July 28. The balloon will make its final stops at two Trustees properties in the Berkshires: Field Farm in Williamstown and Naumkeag in Stockbridge. While Aitken's work will be stationed at some of the state's most historic properties, the piece isn't intended to reflect the past. Instead, through "happenings" scheduled around the balloon's visits, spectators can hear prominent musicians, artists, researchers and scribes addressing the future.

"It's the one uncertainty. It's the one topic that we don't know, that isn't resolved, that's a discussion," Aiken told The Eagle by phone on Wednesday morning before a planned stop at the Holmes Reservation in Plymouth. (Due to extreme weather, the event was postponed; all "New Horizon" events are held rain or shine but are extreme weather-dependent.)

During the installation's July 12 opening night, architect Lord Norman Foster and painter Sarah Morris participated in a conversation about the future of creativity at Long Point Wildlife Refuge on Martha's Vineyard. Two days later, representatives from partner Woods Hole Research Center led a talk about the climate's future. On Thursday night, Aitken and Alonzo are scheduled to discuss "the future of culture" at Field Farm. Aitken stressed that the speaking series is intended to be a conversation, not a monologue.

"This is a critical moment in history, I think. When we look in front of us, we have to make decisions, and we have to stand for certain ideas," said Aitken, who received the inaugural Frontier Art Prize in 2017 and an Americans for the Arts National Arts Award in 2016. "I felt that [this] project, this artwork, could become kind of a turbine for conversation."

The ticketed Field Farm event begins at 6 p.m.; after sunset, the tethered balloon will become a light installation, its 3,552 LED nodes illuminating its surface as Destroyer and No Age perform nearby. Food trucks and Notch Brewing's "Traveling Biergarten" will be on site throughout the program, as well as during "Family Day," which will offer free access to the Williamstown property from 11 a.m. to 12:30 p.m. and 1 to 2:30 p.m. Thursday.

On Saturday, July 27, "New Horizon" will be at Naumkeag's Garden Party from 4 to 7 p.m. During a separate event running from 8 to 10 p.m., Naumkeag After Dark will include dessert and Bang on a Can All-Stars playing Terry Riley's "In C." The next morning, "New Horizon" will close its summer road trip by taking ticketholders on sunrise rides at Field Farm, weather permitting. (Ticket sales are now closed for that event.)

Except for "Sunrise Experience" gatherings, ticketholders aren't able to fly in the balloon. During "Family Day" and "happenings," "New Horizon" is tied to the ground. (It has been transported by vehicle between sites.) But the balloon doesn't need to be airborne for viewers to see how movement inspired Aitken, who didn't want a "static" piece set at one site.

The balloon concept emerged from his desire to involve the Massachusetts landscape.

"I thought it would be very interesting if we could find a way to somehow go through this landscape and really go from place to place in a weightless way," he recalled. "And just in a natural evolution, that led me to this idea of, 'Well, can we fly? Can we find a way to make a sculpture that can somehow fly?'"

Aitken is no stranger to nomadic or reflection-oriented installations. In 2013, he transformed a train into a light sculpture, its cars displaying content as it traveled across the U.S. Artists worked inside the train during the journey, which Aitken later captured in a feature film. With "New Horizon," Aitken made the balloon's gondola into a studio.

"An electronic musician could use and improvise off the landscape below him or her," he said of an example of its potential use.

Also like "New Horizon," "Station to Station" made stops along the way, holding "happenings" in various locales with famous artists, such as Beck and Patti Smith. Mac DeMarco, Lonnie Holley, J nsi, Kelsey Lu, Chadwick Stokes, Moses Sumney, Helado Negro, Julianna Barwick, Julie Byrne and Mary Lattimore were all on the "New Horizon" slate. It's part of Aitken's "polymedia" approach to "happenings" that aim to provide a platform for different perspectives.

"The curation of the music was really based on the idea of creating almost a mobile, almost a collage of different voices, as opposed to looking at a really tight group of musicians that all are playing in the same genre," Aitken said of the acts' diversity.

"This may be our most ambitious project," The Trustees wrote in a FAQ response.

The statewide conservation organization's Art & the Landscape series started in spring 2016. Opening that summer, Sam Durant's "The Meeting House" commented on local black history at The Old Manse in Concord. Next, Jeppe Hein's "A New End" labyrinth spoke to mindfulness at World's End in Hingham. And most recently, Alicja Kwade has reimagined a hedge maze in "TunnelTeller" at Castle Hill on the Crane Estate in Ipswich. For Alonzo, who has curated Art & the Landscape since its beginning, the series helps change perspectives about the organization's 117 properties and make them more accessible.

"We began to develop these projects that weren't about adorning the landscape but were really about engaging the public in different ways," Alonzo said, "meaning, people go to these sites expecting to go to the beach or expecting to see a historic home, or even just to go for a hike, and then their whole experience is transformed by contemporary art."

The curator had long wanted to work with Aitken. Alonzo had been thinking about a film-oriented installation, but Aitken suggested a balloon moving from site to site.

"I thought, 'God, this is so crazy. I love it. I hope the Trustees go for it,' and they did," Alonzo recalled.

The final product is an experience unlike any Alonzo has witnessed.

"I really encourage people to come see it," he said, "because this is not the kind of thing that's going to happen again anytime soon anywhere in the world. How often do you get to go out into nature and listen to world-class speakers, world-class music and look at cutting edge contemporary art in nature?"