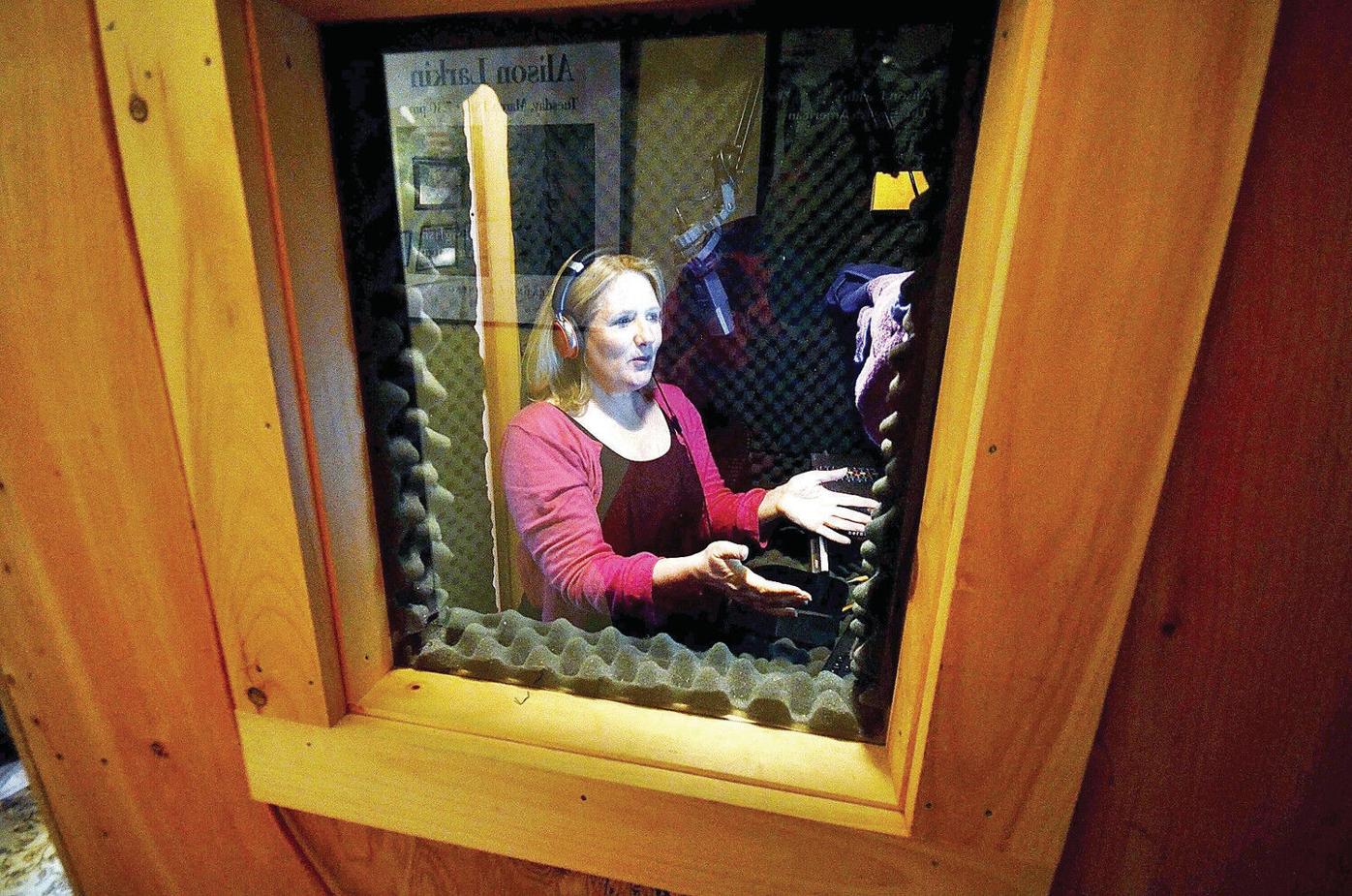 Alison Larkin works in her small audiobook studio behind her home in Stockbridge. Throughout her career, Larkin estimates she has worked on about 200 audiobooks. 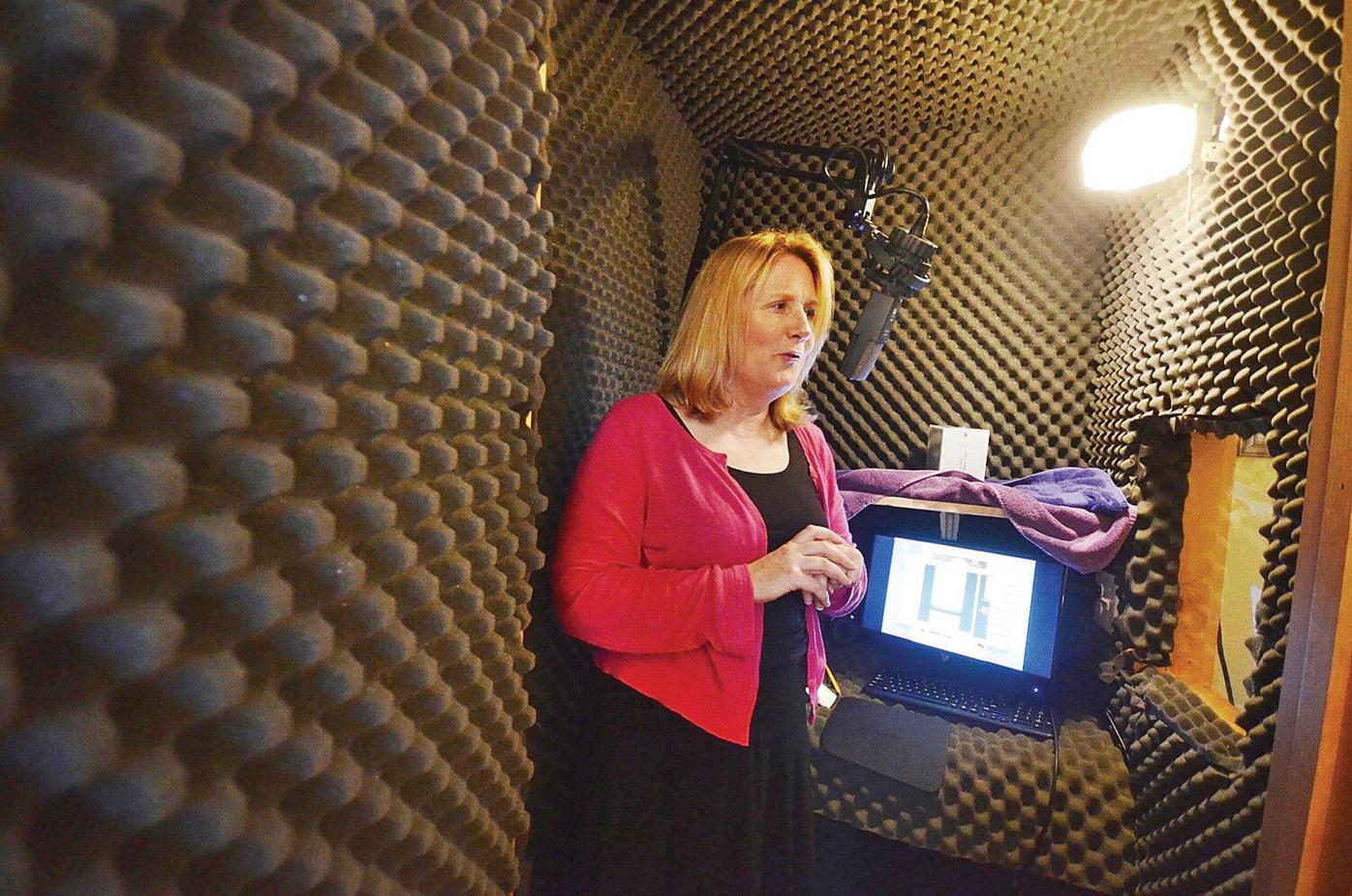 Alison Larkin said she can read aloud for as long as eight hours at a time, but prefers to work in two-and-a-half-hour stints, taking a tea break in-between. 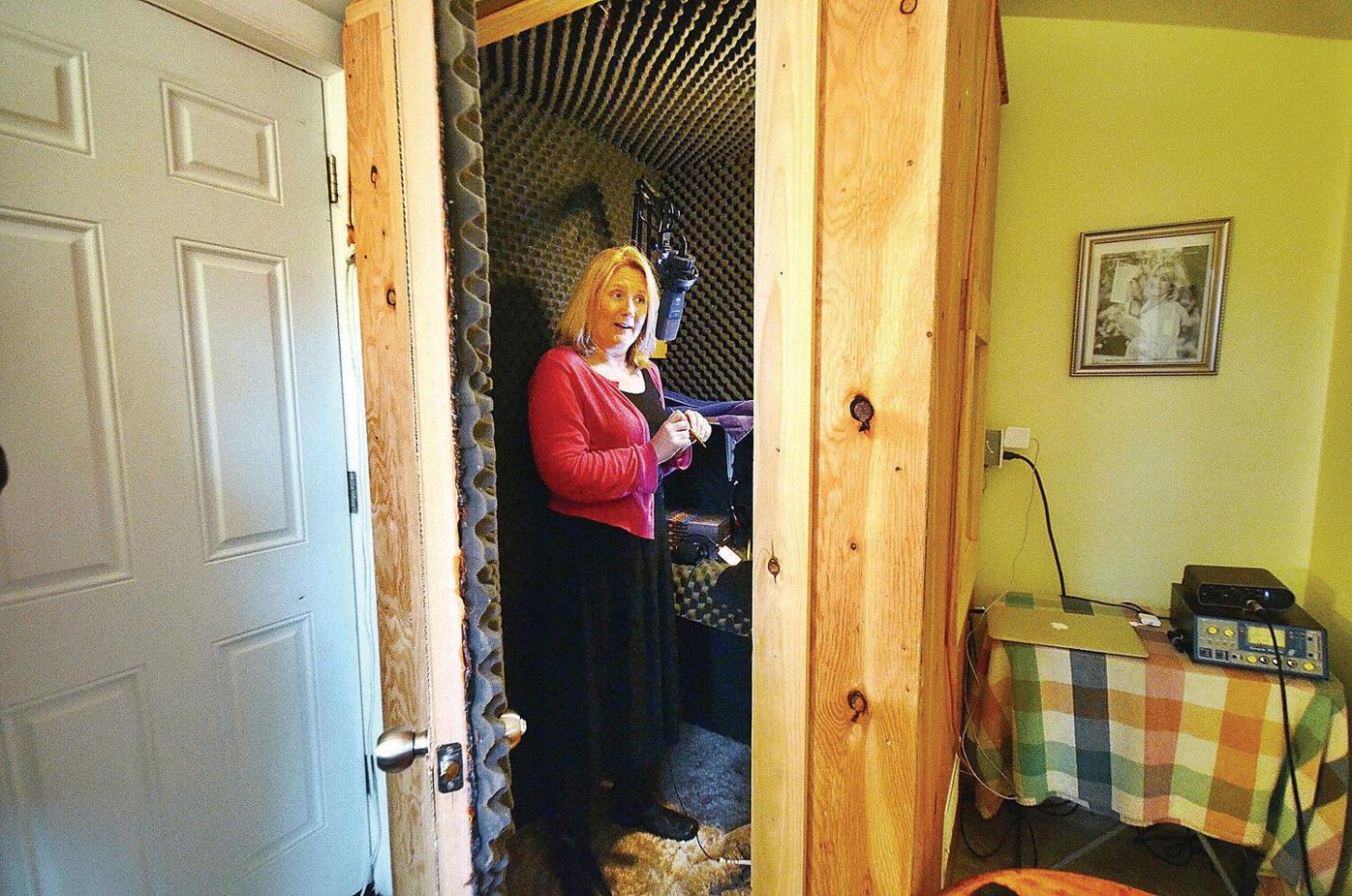 Larkin's studio is in an 8- by 12-foot yellow cottage behind her Stockbridge home. 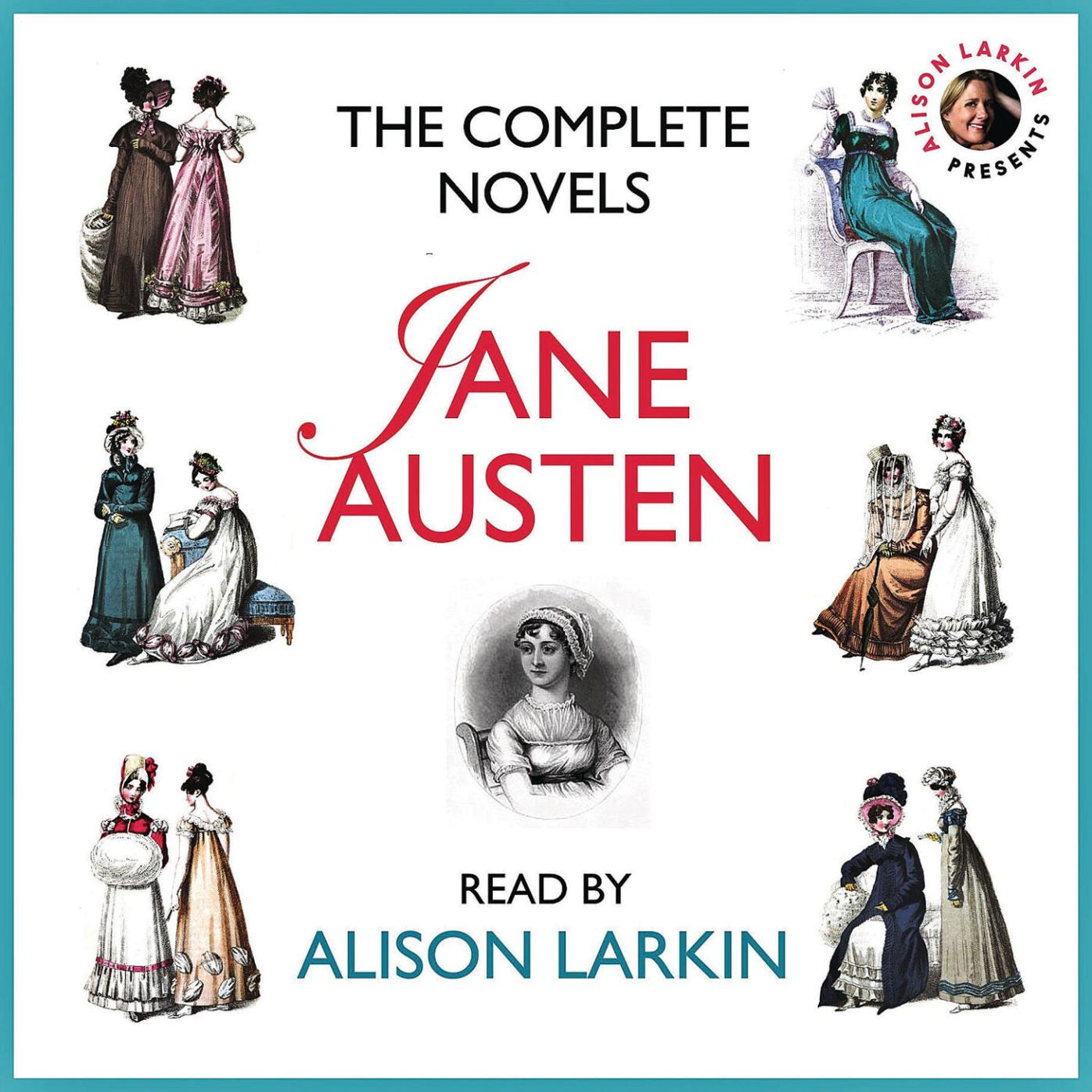 Alison Larkin works in her small audiobook studio behind her home in Stockbridge. Throughout her career, Larkin estimates she has worked on about 200 audiobooks.

Alison Larkin said she can read aloud for as long as eight hours at a time, but prefers to work in two-and-a-half-hour stints, taking a tea break in-between.

Larkin's studio is in an 8- by 12-foot yellow cottage behind her Stockbridge home.

STOCKBRIDGE — Alison Larkin may call her home recording studio a TARDIS — the time machine from the long-running British TV series, "Doctor Who," — but it's her voice that travels through different eras.

Recently, the audiobook narrator was somewhere in England about 200 years ago.

Her latest project, "The Complete Novels of Jane Austen," which was released on Dec. 4, took about four years to finish; the recordings of Austen's six completed novels ("Sense and Sensibility," "Pride and Prejudice" and "Mansfield Park" on volume one; "Emma," "Northanger Abbey" and "Persuasion" on volume two) total nearly 81 hours,all of which Larkin voiced in her Stockbridge studio.

"[I]t is a tiny, tiny studio," Larkin, who lived in England's Sussex county for part of her life, wrote in an email before The Eagle visited the 8- by 12-foot yellow cottage behind her Stockbridge home, adding five exclamation points. "I actually record in a tardis inside a wee yellow studio."

Her time living in Sussex helped inform her Austen narrations, but her more recent home also influenced her.

"I think the reason I live in the Berkshires — I think [the reason] I fell in love with this area — [is] because it's so like Jane Austen's England," Larkin said on a recent Friday morning while sitting on a leather couch facing her recording space. "... If you look at the whole of the United States, this looks most like it. It's very green and very beautiful, and it's a bit like Sussex, where I grew up. And even though everyone here has an American accent, you're still going to get a Mr. Darcy or a Mr. Collins or some of the more nefarious characters and some of the more brilliant in Austen in this community. It's just a couple of hundred years on."

Throughout her career, Larkin estimates she has worked on about 200 audiobooks, recording for major publishers, such as Penguin Books, and creating her own imprint, Alison Larkin Presents. The audiobooks business is growing: according to a Publisher's Weekly report, sales in 2016 increased by 18.2 percent over 2015, and total units sold rose 33.9 percent during that same period.

She hasn't always had her own studio. For large companies, she often traveled to New York City and Los Angeles to record. Otherwise, she began by working in her cupboard, "where many audiobook narrators record," she said.

Tantor Media eventually offered to set up her home studio and teach her audio engineering if she would narrate 15 novels per year for the company.

She has now had the space for about a year-and-a-half, cramming herself into what is essentially a well-insulated closet. Gray foam padding is everywhere; an office chair can be wiggled inside. A microphone hangs above a flat surface like a handset off the hook, beckoning Larkin on a daily basis. There are challenges in recording alone.

"When you're working in New York, you've got a director saying, 'Have a drink. Take a break. You're going too slow.' When you're engineering yourself, you have to be absolutely alert," Larkin said.

Larkin moved to the Berkshires almost eight years ago with her children, Toby and Eliza, who are now 17 and 15, respectively. They first lived in Great Barrington before settling in Stockbridge.

"I think it's an absolutely fantastic place to raise kids far away from the entertainment industry, which, of course, they're probably heading towards of their own volition," Larkin said.

The narrator has had plenty of experience in that realm, having worked in comedy since returning to the U.S. in the late 1990s, when she was 28. She had been living in England and East Africa before then. She was adopted at birth in the U.S.

"I came [back] to America to find my birth mother who came from, of all places, Bald Mountain, Tennessee," Larson said, her voice acquiring a hoarse Southern accent as she spoke.

Larkin continued her theater career that had begun in England and landed some TV gigs, but she ultimately found that stand-up comedy was her calling in the U.S.

"When I first arrived, I didn't know anybody in America, and it was great because I found a way to make what had just happened funny. So, I would say things like, 'I think everyone should be adopted because that way you can meet your birth parents when you're old enough to cope with them.' And, 'The key to dealing with the fear of abandonment is to date people you don't like, so if they do leave you, it doesn't matter.' And I think I found a way to talk about the adoption and reunion experience authentically," she said.

She faced some difficult questions at the time.

"People would say, 'What was it like meeting your real mother?' And to me, my real parents were the ones who'd raised me, and yet I needed to find out the truth about the people I came from," said Larkin, who found her birth parents and remains in contact with them. She is quick to note, however, that she speaks with her English parents more, visiting with them in the Berkshires and abroad.

In the early 2000s, Larkin persisted in exploring her family dynamics in her comedy. She wrote a one-person show in which she played her English mother, her American birth mother and herself. She called it "The English American," taking stages in England and the U.S. She subsequently used the performance as the basis for a novel ("I could do much more with it if I turned it into fiction") that Simon & Schuster published in 2008.

"It did well enough for us to be able to move anywhere we wanted, and I fell in love with this place," Larkin said of moving to the Berkshires.

Larkin narrated the audiobook version, which won an AudioFile Earphones Award. AudioFile magazine presents the honor to "truly exceptional titles that excel in narrative voice and style, characterizations, suitability to audio, and enhancement of the text," according to its website.

Larkin realized that working in narration was conducive to being a good parent.

"The kids need attention," she said. "And the problem with that is ... when I'm writing, I can't think of anything else, but when I'm narrating an audiobook, I can close the door on the studio at 3 o'clock and say, 'All right, what's going on?' and really pay attention."

She can read aloud for as long as eight hours at a time, stopping only for sips of water, but prefers to work in two-and-a-half-hour stints, taking a tea break in-between. Narrating Austen's books has been particularly intense, but she has aimed to be funny. The New Yorker's David Denby was initially unimpressed with this tone in Larkin's reading of "Emma."

"I clicked onto the beginning of the book — and was immediately disappointed. Larkin's voice, I thought, was too light and tinkling for Jane Austen," Denby wrote.

Yet, his opinion changed as he continued listening.

"[Larkin] approaches Austen as a satirist. The initial tinkling sound darkens and attains body and weight as the book goes on; she makes her voice lower and heavier for the men without caricaturing them. Like Page, she italicizes, but she has genuine theatrical skill, so her Mrs. Elton, swooping and dipping in flights of arrogant self-serving nonsensical observation, and her Miss Bates, anxious and desperately self-conscious even as she talks without end, are both sustained comic creations. The voice reveals all," he wrote.

"It was like a gift from God because, of course, that's exactly what I've been trying to do. ... Jane Austen's supposed to be funny, and he got it," Larkin said.

Larkin has long been an Austen fan and was thrilled to voice works she loved, but the famous author's words presented multiple challenges.

"The length of the paragraphs, and, I think, the sense of responsibility because it's Jane Austen," said Larkin, who said she will donate $5 from every audiobook downloaded through the link on alisonlarkinpresents.com to the Jane Austen Literacy Foundation. "So, if I'm going to do it, I have to do it as well as is humanly possible because it's Jane Austen. And, I think the challenging thing for me has been to look at it with completely fresh eyes and to make it sound like it's the very first time it's been said because 'Pride and Prejudice' is one of the most famous books in the world. Everybody's read it. What can I do — how can I make it different? How can I make it accessible?" she said.

Yet, at the same time, she's trying to recreate a time and a place.

"I just want people to feel like they're in Jane Austen's world," she said.