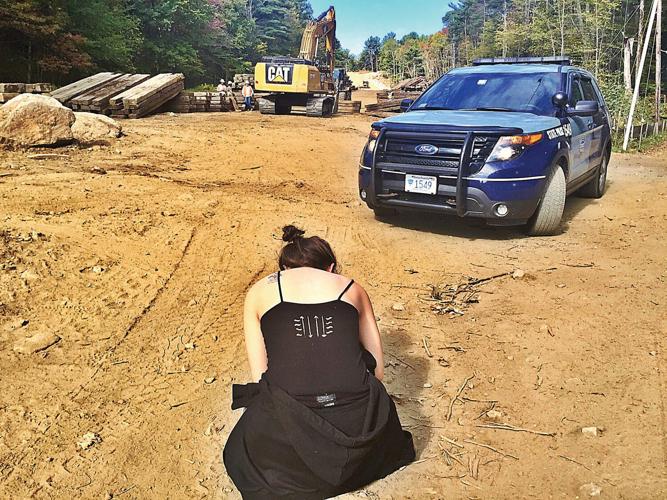 MyKennah (Little Wind) Lott lights sage at the side of the road in the pipeline corridor. 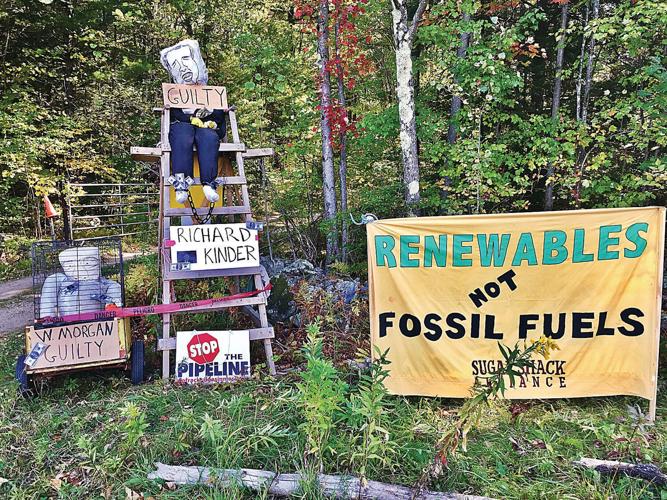 An effigy of Richard Kinder, Kinder Morgan Executive Chairman, at the side of Cold Spring Road. 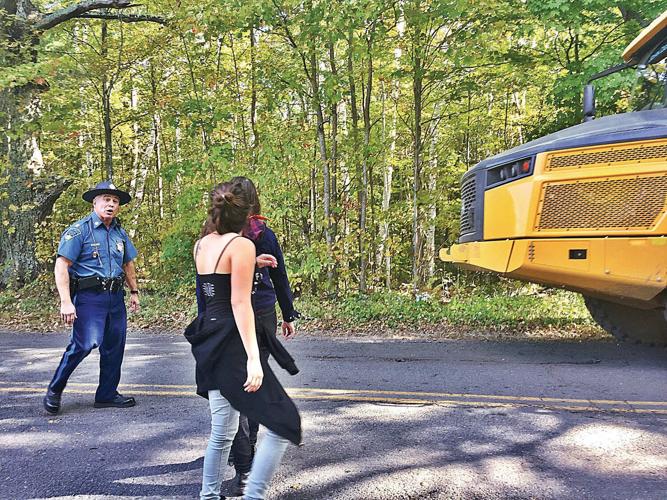 MyKennah (Little Wind) Lott and another water protector threaten to block passage of the equipment. 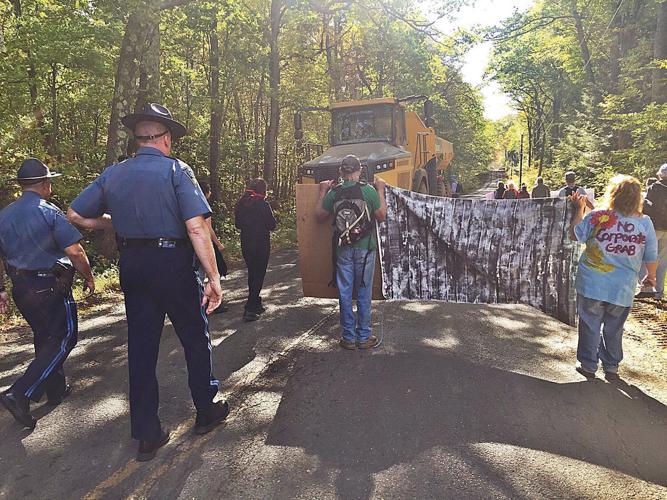 MyKennah (Little Wind) Lott lights sage at the side of the road in the pipeline corridor.

An effigy of Richard Kinder, Kinder Morgan Executive Chairman, at the side of Cold Spring Road.

MyKennah (Little Wind) Lott and another water protector threaten to block passage of the equipment.

SANDISFIELD — When all else fails, keep bugging the pipeline company, and try a little voodoo.

"I think us just being here is having an effect," said Steven Botkin, one of around 20 activists in Otis State Forest on Thursday to remind everyone that methane will soon be flowing through this slice of state-owned and protected land.

Indeed, their presence temporarily stopped some work, created a few other hassles, and a touch-and-go moment between a young water protector and a Massachusetts State Police trooper.

But first, an effigy of Kinder Morgan's executive chairman, Richard Kinder, was assembled on private land at the side of Cold Spring Road. The plan was to burn it, but that didn't happen — not yet, anyway.

Instead of setting a fire, the water protectors and members of the Sugar Shack Alliance walked up and down the road, at one point trying to stop a large truck, sparking brief tensions between Massachusetts state police troopers and two women.

Everyone simmered down, and headed for their destination, a pipeline construction area on each side of the road, where a long swath of state forest was cleared to make way for this third transmission line.

This section of the 13-mile, $93 million storage loop has been the site of protests and more than 70 arrests since the work began in May. Activists object to the construction of the pipeline on public land and the potential impact on climate change.

They haven't been quiet.

"Mni wiconi!" shouted the water protectors, who moved to an activist camp in Sutton after spending months at the Standing Rock Indian Reservation in North Dakota protesting the Dakota Access Pipeline. Mni Wiconi means "water is life" in Lakota.

"Who do you protect?" they shouted, directing it at the troopers, some of whom are on a special company detail for which the Kinder Morgan pays the state. Other troopers are pulled from their standard deployments when needed.

Today they were. And they weren't quiet either.

"We appreciate your cooperation for letting that truck pass," said Lt. Jeffrey McDonald, who then began a moment of human-to-human straight talk. He wanted to know if today's plan included arrests that would require more trooper mobilization. And he stunned the group with his reason why.

"We've all got lives," McDonald told them. "I've got little ones at home. I've got to get them off the bus. I'm not going to let an 11-year-old wander home alone. I'm asking just for purposes of child care."

Botkin said that was a great reason not to strike up yet another round of civil disobedience, though none had been planned. Botkin has been arrested here several times since May.

"We're doing this for your daughter, too," said MyKennah (Little Wind) Lott, an Arapaho woman who was arrested two weeks ago for trespassing here.

"Believe me," McDonald said to her, "there are many things about what you're doing here that are close to my heart as well."

Then he asked Rema Loeb, 84, if she was OK continuing to walk the road with the others. She held up her small portable stool and nodded.

After a philosophical conversation between McDonald and the group, Lott kneeled in the dirt and lit some sage.

And there were quiet moments, when everyone just looked up at the pipeline corridor. The work is nearing completion, and everyone noticed a large stone wall along the forest that wasn't there before.

Troy Wall, a spokesman for the Department of Conservation Resources, said DCR officials are having ongoing conversations with company representatives about the project and excess rock dug from the pipeline trench.

"Currently, the agency has expressed interest in retaining some of the rock for use within the forest, such as for the creation of wildlife habitat," Wall wrote in an email. "Rock determined to be excess will be removed from the forest by the contractor."

Kinder Morgan spokesman David Conover said that unless private or state landowners want to keep the rock, it will be hauled out by the company.

Documents in the company's environmental plan say Tennessee Gas will restore the landscape to its original condition as much as possible. Conover said restoration is underway.

He said the six-month project would be completed on schedule, with gas flowing sometime in November.

But until then, come here any day and you might hear shouts of mni wiconi echo through the forest and across Lower Spectacle Pond, and see a lineup of state police troopers, ready with handcuffs, or friendly conversation.