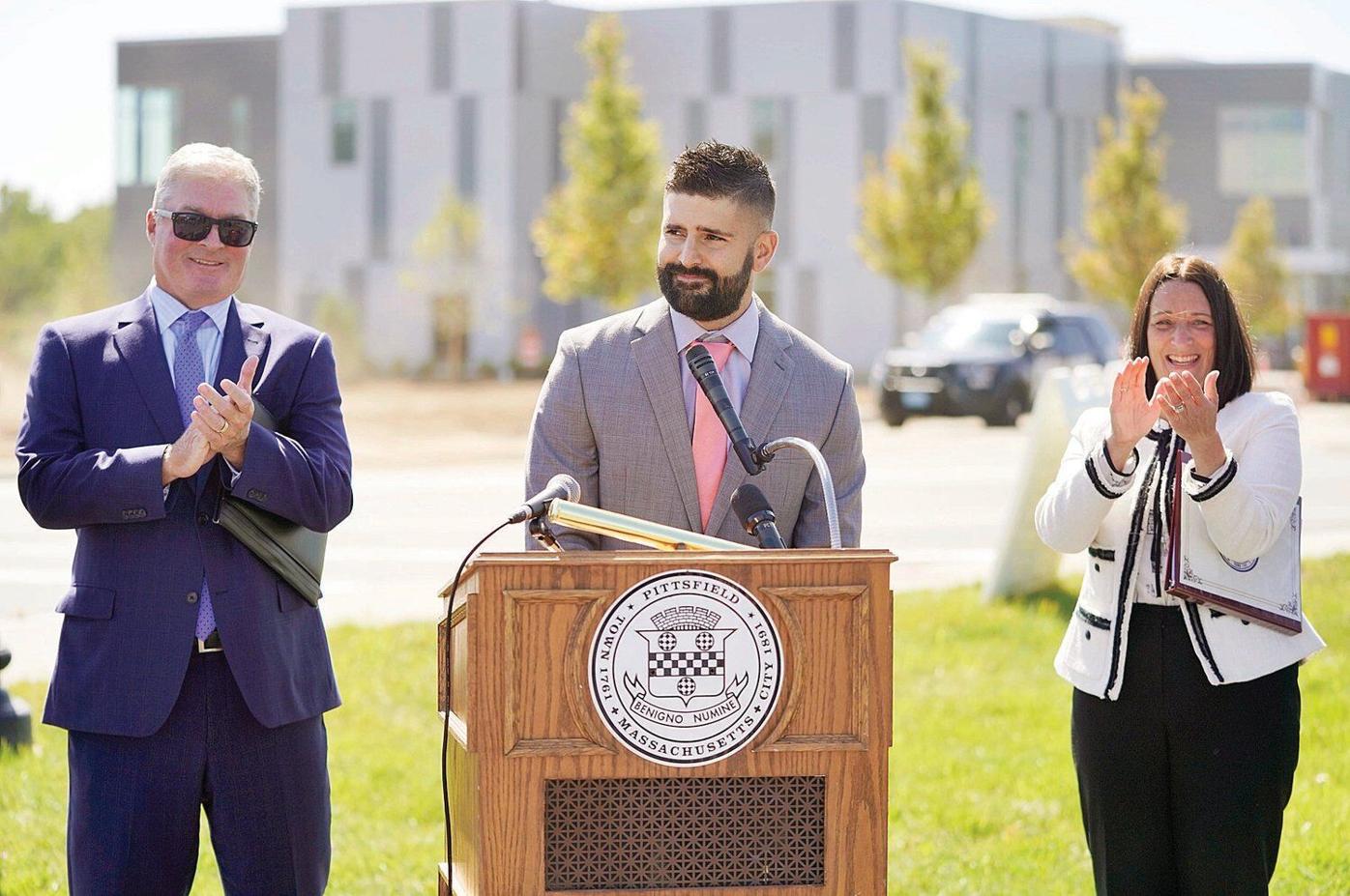 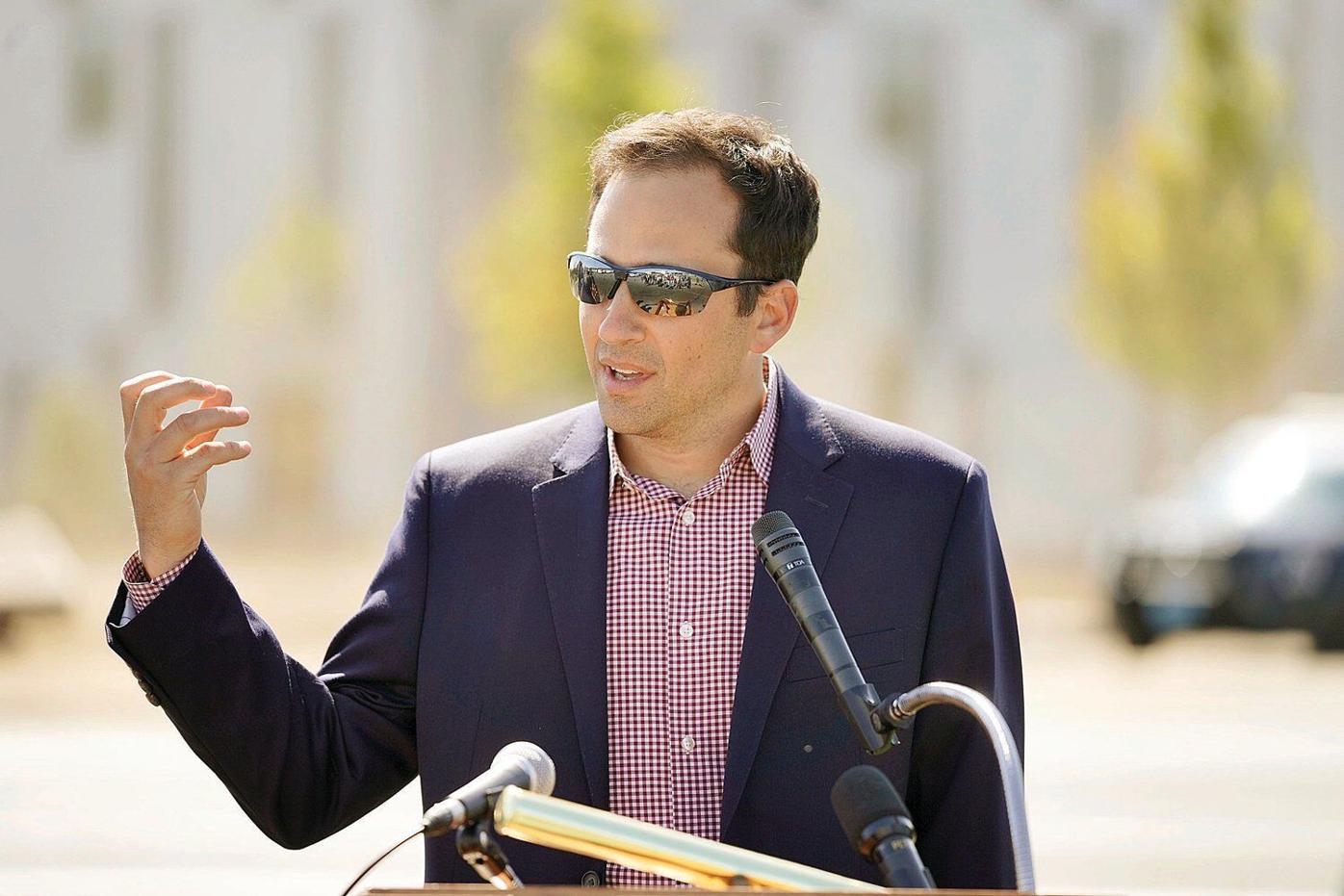 Ben Sosne, executive director of the Berkshire Innovation Center, addresses attendees at the Pittsfield hub during a ceremony at the site Thursday to announce Electro Magnetic Applications' plans to set up shop at the center by the end of next year. "They are going to be a role model for any young student that comes through here," he said. "We're thrilled to have them as a member of the BIC."

Ben Sosne, executive director of the Berkshire Innovation Center, addresses attendees at the Pittsfield hub during a ceremony at the site Thursday to announce Electro Magnetic Applications' plans to set up shop at the center by the end of next year. "They are going to be a role model for any young student that comes through here," he said. "We're thrilled to have them as a member of the BIC."

PITTSFIELD — An aerospace testing chamber slated for the Berkshire Innovation Center will be the first of its kind, according to those behind the project.

The company, Electro Magnetic Applications, or EMA, plans to set up shop at the center by the end of next year. Mayor Linda Tyer said EMA is scheduled to be the center's first tenant. Construction at the innovation hub, situated at East Street and Woodlawn Avenue, is set for completion in October and the center is expected to open in January, according to Stephen Boyd, chairman of the BIC board of directors.

Leaders of EMA, primarily a software and consulting firm based in Colorado, said they plan to use the lab to test equipment launched into space.

Tyer said the new testing facility comes with six new jobs averaging $60,000 a year in salary. But company leaders said that is just a start.

Space expeditions are expensive undertakings that continue to suffer preventable failures, he said. The testing chamber will empower industry leaders to expose space-bound equipment to spacelike elements before its departure.

"There's a lot of well-catalogued failures," he said. "Had they had this capability, they would have known that this was a problem and this would not have happened."

McKennon moved to Pittsfield for a job at General Dynamics and has lived here with his wife since 2013. He said Pittsfield seemed like "an ideal location."

Tyer aims to use $140,000 from the city's Economic Development Fund to support the new lab, and formally will pitch that idea to the City Council on Tuesday. She also will bring forward a tax increment financing plan, she said.

Michael Coakley, the city's business development director, said the announcement came this week, two days after the preliminary election, because this is when the funding and paperwork fell into place.

"These things take a little while to put together," he said.

The proposals under consideration by the City Council on Tuesday reflect months of work, Tyer said. She said bringing EMA's "cutting-edge technology to the city is a milestone." By supporting EMA's investment in Pittsfield, she said, the city has an opportunity to put the company's roots down in the city while its scientists do work that reaches into space.

"We thought that the BIC would be a perfect space for them to locate," Coakley said. "We see this as a win-win-win scenario."

The testing facility is planned for the BIC, but Coakley said the hope is for EMA to expand into the William Stanley Business Park.

Boyd said the new lab will establish the BIC as an innovation hub in the emerging space industry. The move also will bring a visiting customer base into Pittsfield, he said, as well as encourage other companies in the industry to follow suit into the city.

"It really could have a domino effect once it's in place," said Deanna Ruffer, Tyer's community development director.

Coakley said McKennon approached him and Tyer's Red Carpet Team about the project.

Wayfair is on track to move into its newly renovated space in the building next month, he said.

He said he also is in conversations with other companies sizing up Pittsfield, and on that front he hopes to have news in the coming weeks.

Ben Sosne, executive director for the BIC, said the EMA team is one that will be of value for the burgeoning innovation hub.

"They are going to be a role model for any young student that comes through here," he said. "We're thrilled to have them as a member of the BIC."

Gregory Wilson, senior scientist with EMA, said there are other testing chambers that exist, but they aren't as extensive in their testing panels — they have incomplete energy ranges, electron spectrums and instrumentation — and they aren't accessible industrywide. He called the planned one in Pittsfield the first commercial test facility.

"This is an emerging market, since it has largely been handled by government and academia," Wilson said.

Private industry has incentives to explore space in ways that governmental and academic agencies don't, he said.

"We are designing this chamber to serve industry and the commercialization of space."