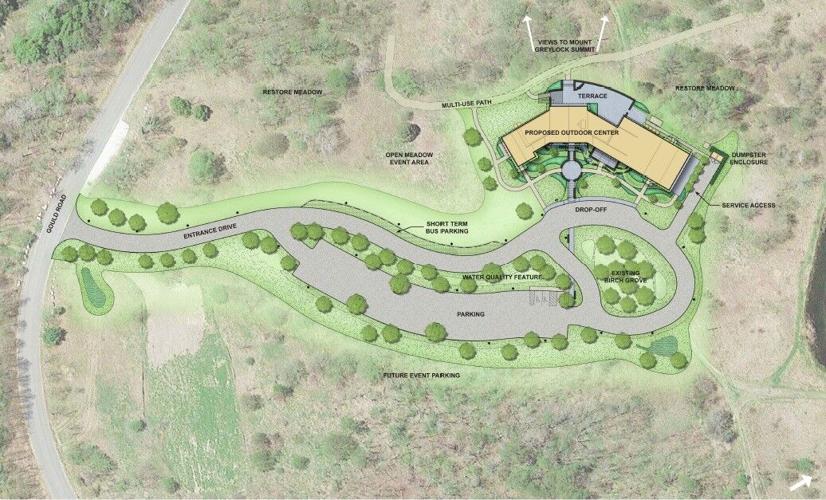 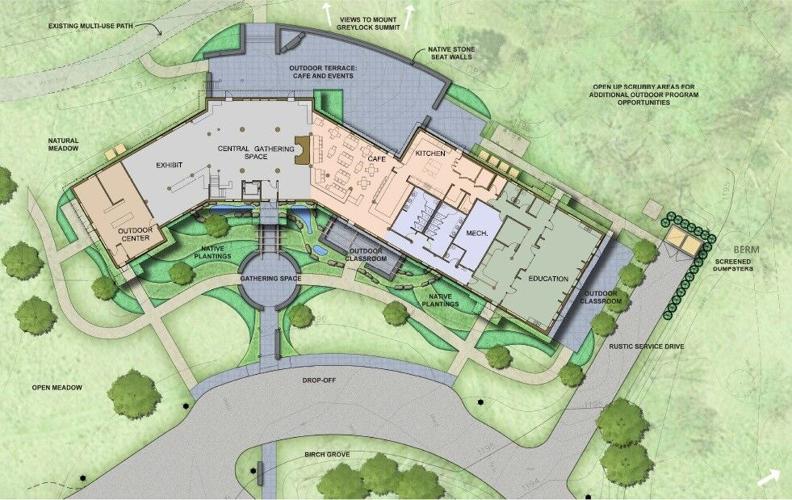 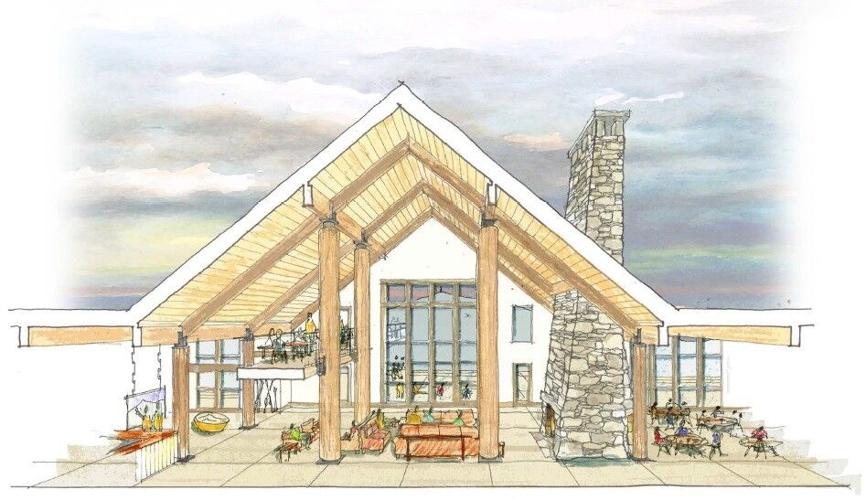 A view of the proposed Greylock Glen Outdoor Center off Gould Road in Adams. At $6.5 million, the first stage of the project is modest compared with other parties' past ventures. 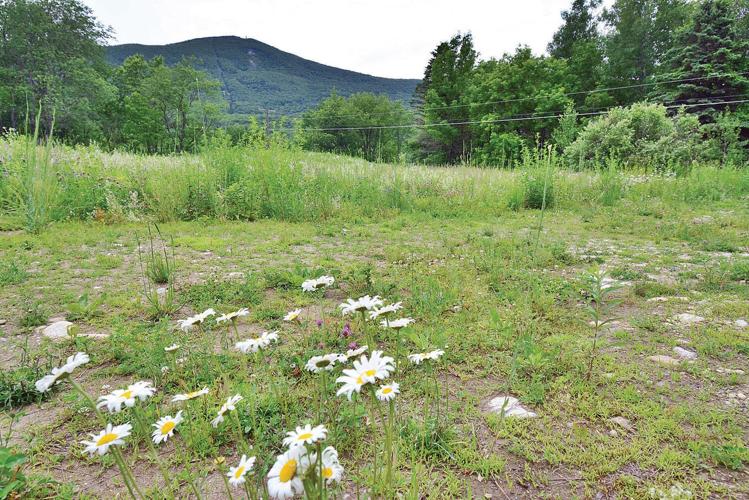 An area at Greylock Glen, where an environmental education and Nordic ski center is planned. While environmental groups rose to challenge past Greylock Glen projects, the new effort, which would leave 94 percent of the site untouched, counts them as allies.

A view of the proposed Greylock Glen Outdoor Center.

A view of the proposed Greylock Glen Outdoor Center off Gould Road in Adams. At $6.5 million, the first stage of the project is modest compared with other parties' past ventures.

An area at Greylock Glen, where an environmental education and Nordic ski center is planned. While environmental groups rose to challenge past Greylock Glen projects, the new effort, which would leave 94 percent of the site untouched, counts them as allies.

A view of the proposed Greylock Glen Outdoor Center.

ADAMS — For half a century, a revered tract of public land east of the state's highest peak had resort developers seeing green.

But dreams of commercial mega-projects crashed time and again. In their wake, a smaller-scale definition of Greylock Glen success began germinating — and today, after more than 10 years of planning, it plants a flag.

Next year, officials hope for an actual groundbreaking.

At a 10 a.m. gathering today at Town Hall, Adams officials will outline plans for the Greylock Glen Outdoor Center they hope to begin building off Gould Road on the west side of town next summer — and open the year after.

At $6.5 million, the first stage of the project is modest compared with other parties' past ventures, one of which envisioned spending $260 million to erect 1,275 condominiums.

While that might have landed with a thud locally, this remake steps lightly on the land, proponents say, using trails, not golf links, to lure people into nature.

And instead of second homes, later stages of the new plan would build tent and primitive campsites, keeping the focus on what proponents see as the enduring diamond in the rough: the land itself.

While environmental groups rose to challenge past Greylock Glen projects, the new effort, which would leave 94 percent of the site untouched, counts them as allies.

The Massachusetts Audubon Society plans to submit a bid to run environmental programs at the center, even moving camp programs there.

"It is very different from other projects," Donna E. Cesan, Adams' director of community development, said of the new Greylock Glen, which is already attracting visitors to a multipurpose, four-season trail system.

"We feel it will really put the town and the Northern Berkshires on the map," Cesan said. "We're very excited to get to this point. This project is ready to go."

All major permits are in place, including approvals under the Massachusetts Environmental Policy Act, wetlands reviews and a special permit from the town Planning Board. But an additional $6.5 million in funding is needed before the project goes out to bid.

The town's two representatives on Beacon Hill, state Rep. John Barrett III, D-North Adams, and state Sen. Adam Hinds, D-Pittsfield, believe Cesan and the town, which is overseeing development, have dialed in the right mix this time. Both are helping seek financial backing from Boston.

By design, the project seeks first to cement the Glen's appeal for outdoor recreation, capitalizing on the area's beauty. The Glen parcel, at 1,063 acres, includes woodlands, open land, ponds and wetlands and lies close to the 12,500-acre Mount Greylock State Reservation.

Evidence remains of past development misfires. Several ponds were created for a 1970s golf course that went belly up. And the foundation of a failed 350-room hotel carries the nickname "rebar forest."

In time, the footprint on the mountain's eastern slope could grow to include a 2,500-seat performing arts amphitheater and, if sufficient private investment steps up, a lodge and conference center.

"We have these assets here that make us the center of gravity in outdoor recreation," Hinds said, referring to the land. "You can really see this filling that gap."

Proponents make clear that, unlike past proposals, the slimmed-down Glen development will go as far, and as fast, as market demand takes it.

But for those hoping to boost this town's economic prospects, the sooner the venture rolls out, the better.

Barrett said he believes the retooled Glen project can become a "linchpin" of stepped-up commerce in a community that lags the state economically. In 2017, Adams saw an average unemployment rate of 5 percent, compared with 3.5 percent for the state, according to the Bureau of Labor Statistics. Median household income was $48,422 in Adams in 2016, census data show, compared with $75,297 for the state.

"This project is extremely connected to the town of Adams. This is truly a community-based project," Barrett said. "It's an economic development project, too. It's going to be shovel-ready after this design is completed next March."

The full proposed build-out would cost about $50 million, much of it from the private sector. It would include a 140-site campground with restrooms, hot showers, rustic cabins and what are described as "eco-tents."

Though it might not rise for up another decade, the planned Thunderbolt Lodge and Conference Center, with up to 170 rooms for guests, is seen as a key aspect of the Glen's ability to boost tourism and tax revenue for Adams.

Cesan said each of the plan's elements can stand on its own, regardless of whether the conference center, pegged at about $20 million, materializes.

"This isn't all going to be happening at once," Barrett said. "The outdoor center will still be viable, as will the campground and the amphitheater."

Full designs for the net-zero energy structure are being prepared by Maclay Architects of Vermont, which won a competitive bid awarded last year. Plans are expected to be ready by February.

Though the project to date has benefited from about $6 million in public investment, most of it state money for site improvements and infrastructure, more is needed.

For work on the 11,000-square-foot environmental education center to begin as planned next summer, the project needs additional funding, according to Cesan.

The cost for the center breaks down to $5 million for the building, which would include a cafe and equipment rentals, as well as teaching spaces, and $1.5 million for site work. In winter, the center would provide gear for cross-country skiing.

Janette M. Kessler, president of Identify Technologies in Williamstown, said the key differences in this version of a Glen project is the depth of public-private partnerships already in place and the backing it has received from environmentalists. She has advised Adams on the effort.

Both the state and town have chipped in so far. A $2 million MassWorks grant obtained through the Executive Office of Housing and Economic Development paid for new water and sewer systems and Gould Road work. In a 2018 round of funding from that source, the Glen hopes to secure an additional $2.5 million to $3 million for a 400,000-gallon water tank able to supply the entire development site; other money would pay to move or bury power lines.

Another key partner has been the state Department of Conservation and Recreation, which made $3 million available for the venture after the town was designated as the Glen developer in December 2006. That money fueled project planning and permitting and covered work on trails, among other things.

For their part, Adams residents have committed nearly $1 million over the years, both through town meeting appropriations and annual operating funds, not including staff time, Cesan said.

After years of false starts by others interested in Greylock Glen, the town worked to get outside views on the new effort's viability. C.H. Johnson Consulting of Chicago was tapped in 2016 to gauge how the project would fare. The firm had been here before, pondering the Glen at the state's behest, in 2004, and returned to provide an update, which it did again for 2018.

The first thing the consultant noted in its executive summary was the project's reduced scale, "which will make the project much simpler to execute."

Another difference: Over the years, willing local partners had stepped up. Along with Mass Audubon, the Glen project lists the Appalachian Mountain Club as an ally.

From the north, it also has backing from leaders of the Massachusetts College of Liberal Arts, whose students will be able to join in on environmental studies and research.

Another supporter is the Massachusetts Museum of Contemporary Art, whose executive director, Joe Thompson, is expected to speak to the Glen's regional value at Friday's event.

When the town brought the Chicago consultants back, Cesan had them attempt to calculate the economic benefits the project could bring to the region.

Marketing studies found that the fully realized project would create 375 full-time jobs and lead indirectly to an additional 300 positions.

It would generate $2 million a year in tax revenue shared by Adams, the state and the federal government, the analysis shows.

Given its economic distress, Adams qualifies as an opportunity zone and, based on census tract data, is eligible for what are known as new market tax credits.

For now, the Glen project is teed up and ready to prove its worth by attracting people in search of outdoor adventure and exercise, its advocates say, whether on mountain bikes in summer or skis in winter.

"Once we become a destination, that's when the private dollars, the private investment, will be coming," Cesan said. "We feel this is the right size to transform our local economy to one that is more tourism-based."

Barrett said he believes people in Adams want the Glen project to rise, but might have trouble picturing it.

"They're still skeptical because they've been talking about it for 45 years," he said.