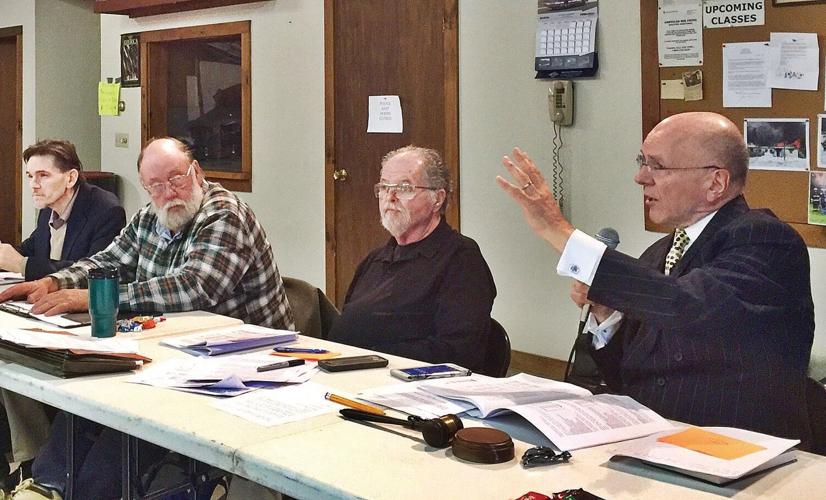 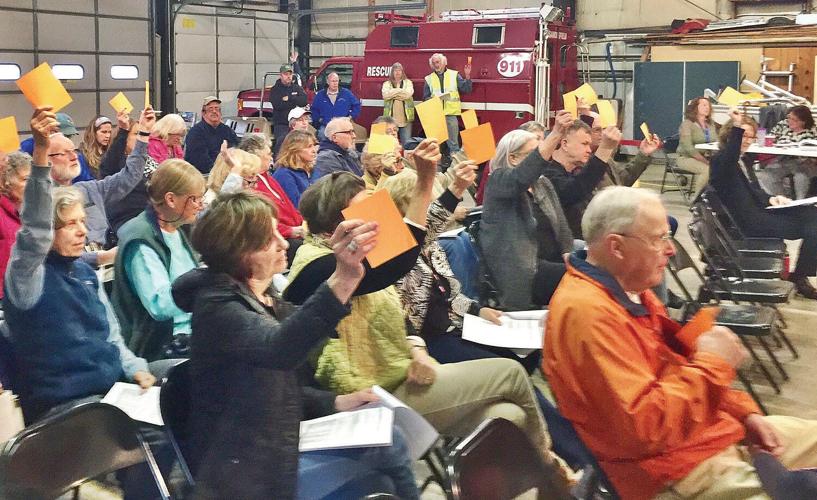 Sandisfield residents take a vote during Saturday's annual town meeting, which was held in the fire house.

Sandisfield residents take a vote during Saturday's annual town meeting, which was held in the fire house.

SANDISFIELD — Voters approved the town's operating budget and school costs, rules for solar installations, and hashed through a debate about highway department salaries.

Residents also approved more money for building repair and maintenance, given how long attention to town buildings has been deferred.

And it was all done in "jolly good" style, shepherded by one resident who is possibly the town's first British moderator.

Author and resident Simon Winchester, who was elected town moderator last year, is currently on tour promoting "The Perfectionists." He made stops in Washington, Boston and Philadelphia before returning to the Berkshires. He was expected to head back out Sunday to resume his tour on the West Coast.

But the focus Saturday was on his role as moderator, whose principal responsibility is to oversee the annual town meeting.

Winchester began by honoring the "pathfinders" and first settlers on this land — the Mohican Indians.

Then it was all business, as voters approved the town's $1.4 million share of costs for the Farmington River School District, which saw a 2.5 percent increase due to salary and insurance hikes, said Select Board Chairman John Skrip. He also said the rise can also be attributed to 10 new students attending the schools.

One voter had questions about this, and the process of giving the road superintendent two raises since August.

Skrip said the hike resulted from a 2.5 percent increase in the salaries of three full-time and one part-time staff. It also includes money budgeted for another full-time highway worker should the town need to hire one.

Skrip, who is running for re-election, said the board is in union negotiations about a hire, and said the goal was to have another part-time position.

But questions arose over how O'Brien's salary rose from $54,000 to $68,000. Skrip said his starting salary was low compared to other positions in surrounding towns, and that two $5,000 raises were stipulated in his contract if he showed the town he could save it money.

That he did, Skrip said — O'Brien saved the town $125,000 for repairs to the Rugg Bridge, which was finished last week for under $25,000 rather than the estimated $146,000. He also said the department was starting to take on more than just highways and would be renamed Department of Public Works.

Jeffrey Gray, a candidate for Select Board, said there was impropriety in the way these raises were given, but did not explain.

Finance Committee Chairman Joe Gelinas said the money for the raises came from funds budgeted last year for a fourth staff member, not yet hired.

Roads are a major expense in Sandisfield — it has 94 miles of them, and nearly half are dirt. They are in rough shape, and no one disagrees about this. One person said highway staff should do a better job, especially before getting raises.

"Where is the employee review structure?" said Brigitte Ruthman. "Our policy of letting snow melt in the spring is unique in Berkshire County."

Skrip said the board is working on building a formal employee review system.

But another resident decried fellow voters for picking apart such salaries in public.

"There isn't a person on the highway maintenance department who doesn't deserve every penny ... and more," said Susan Van Sickle.

Residents also said other deserving recipients of taxpayer money are town buildings, and they increased building maintenance and repair funds by $22,000 after that line was cut by $16,000 for this 2019 budget.

"Someone's going to get killed on the handicap ramp at Town Hall," said Fire Chief Ralph Morrison. "It's all rotted out."

The list of worn out buildings is long. Theresa Spohnholz, the town's treasurer and librarian, ticked off many of the library's physical woes.

Morrison criticized town officials for cutting costs at the expense of the town's infrastructure. Gelinas said proposals for what to fix had not been made, and so the maintenance budget was cut.

"Why would you decrease the budget when our buildings are going in the dump," he said, adding that there was also liability to think of. "This is not good for the town of Sandisfield."

Also, Police Chief Michael Morrison will receive a $5,000 stipend for dealing with work-related calls after hours. The department's $12,000 increase also includes money for officer training, which was cutting into full-time work hours.

Voters also approved several articles to create a fund for Yanner Park, 257 acres bequeathed to the town by Merwin Yanner in 1995. The land has been embroiled in controversy over a logging operation there. About $108,000 from timber harvesting at the park will be used as a capital fund for town projects, including work at the park, but disagreement among residents reared up again Saturday.

Skrip said the board wants to hold informal meetings with residents for input about the park.

Heather Bellow can be reached at hbellow@berkshireeagle.com, on Twitter @BE_hbellow and 413-329-6871.