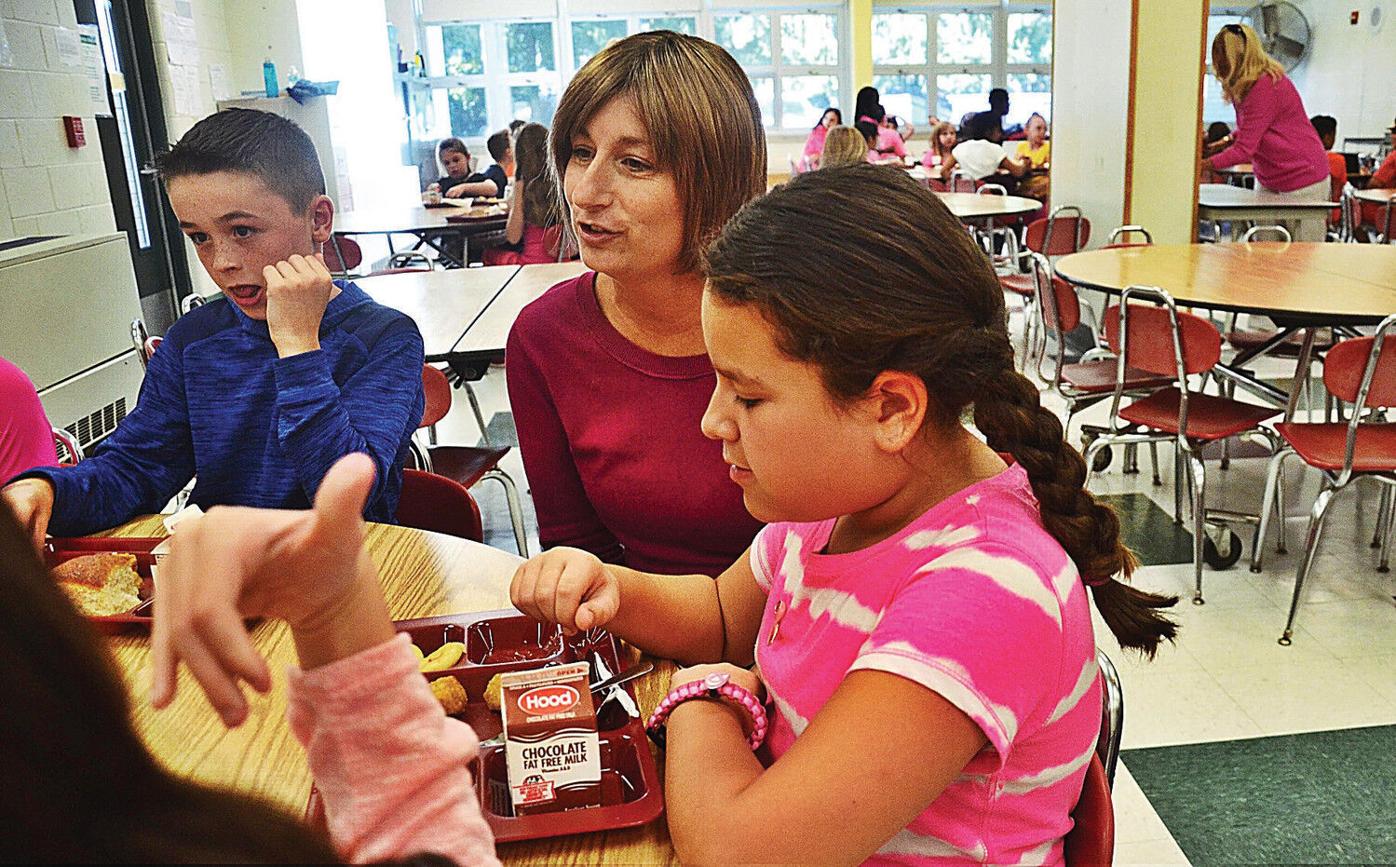 Brenda Kelley, principal of Allendale School, talks with fourth graders dressed in pink in the cafeteria on Monday afternoon. 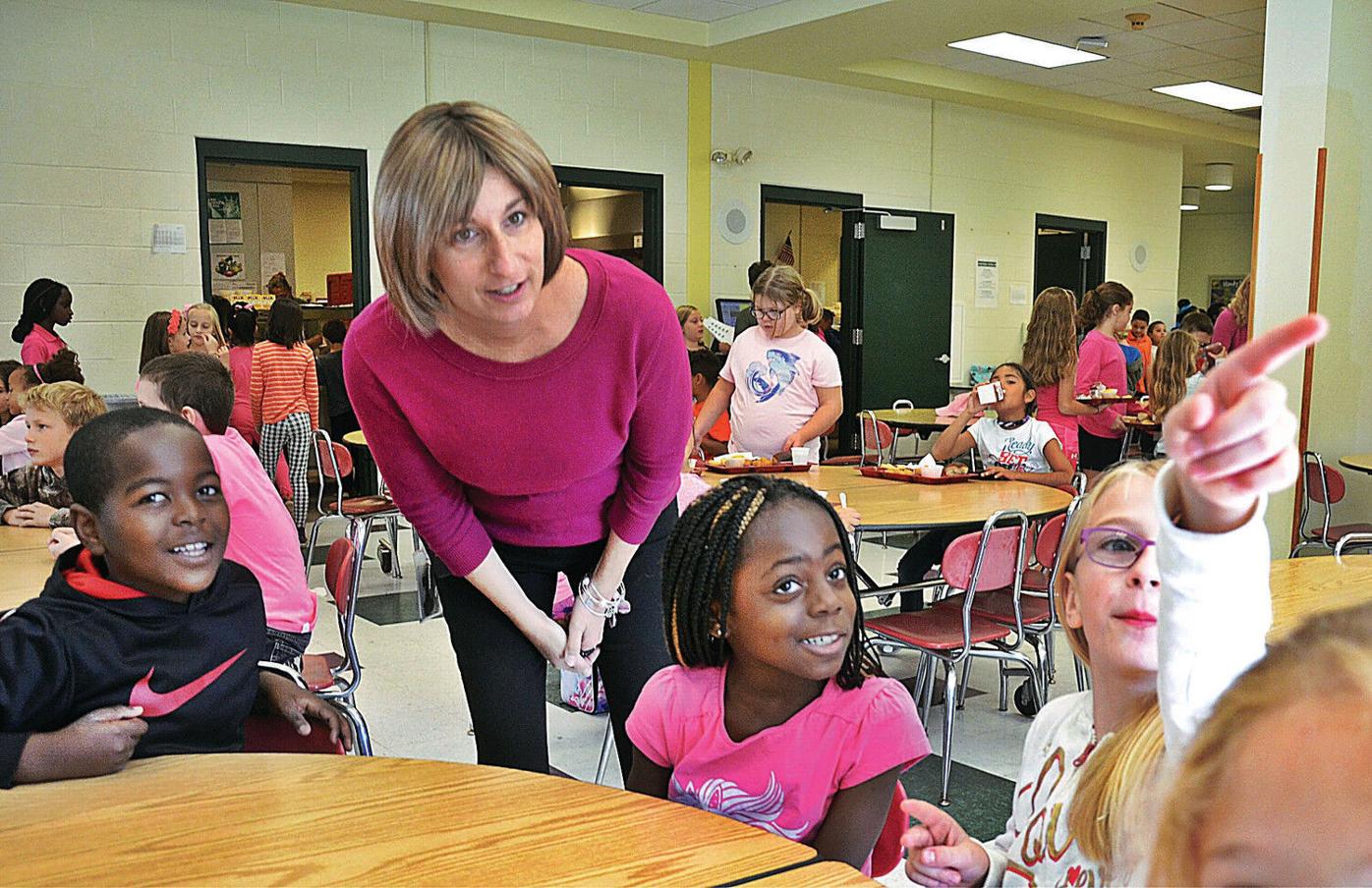 Brenda Kelley, principal of Allendale School, talks with third graders dressed in pink in the cafeteria on Monday afternoon.

Brenda Kelley, principal of Allendale School, talks with fourth graders dressed in pink in the cafeteria on Monday afternoon.

Brenda Kelley, principal of Allendale School, talks with third graders dressed in pink in the cafeteria on Monday afternoon.

During Monday's Allendale Wears Pink day-long show of support for Allendale Elementary School Principal Brenda Kelley, who was diagnosed with stage 3 breast cancer in June, the small gestures were as poignant as the bold ones. While many students and faculty members at the school went all-out with their get-up, sporting fluorescent shirts and (temporarily) tattooing pink breast cancer awareness ribbons to their cheeks, others who settled for similar colors or subtler measures had clearly received the appreciative message nonetheless.

"They really made a concerted effort," interim principal Donna Baker said while watching pink clusters of third and fourth-graders bustling in the cafeteria.

To be certain, many of the school's 285 students enthusiastically took to the challenge, even if their understanding of cancer and its implications varied. (The school lets parents handle those discussions.) Three Pittsfield fifth-graders' efforts were representative. Trinity Bassett dyed her hair pink for the occasion. Zackary Schneider's cheeks and a pin on his pink "Built for Battle" T-shirt bore the awareness ribbon. His mother had purchased the shirt specifically for the event.

"I was glad because I like pink, and I was happy to help Mrs. Kelley," Kaitlyn Timoney, decked out in a lighter shade of the color herself, said outside a classroom.

Students' families had been notified of the event on Friday and Saturday by phone and email, according to multiple school administrators. The school encouraged students to not only wear pink but also bring cards to give to Kelley.

School social worker Heather Alston came up with the idea for Allendale Wears Pink when the principal began receiving treatments on Sept. 5, shortly after the beginning of school. "She's just so dedicated and just loves all these kids so much, and this is so much her building," Alston said of Kelley, noting that the beginning of Breast Cancer Awareness Month played a role in the event's timing.

The event was a surprise to the principal, who had started the day by meeting with some staff at 7:45 a.m. She then went about her morning routine of greeting students as they exited buses around 8:30. When the children began handing her cards, she knew something was up.

"I'm very touched [with] seeing their support for this disease whether or not all of them understand it," Kelley said in her office after visiting with students in the cafeteria. Roses sat on a table; Alston had arranged for each class to give Kelley one as she circulated through rooms during the morning. Kelley also faced a box stuffed with cards.

"You are amazing You are brave You are strong YOU GOT THIS!" one of the notes read.

The support clearly overwhelmed the 46-year-old, her voice breaking periodically as she answered questions. This day was far more joyful than "another faculty meeting day" in June. That day, she had received a phone call around dismissal time informing her she had cancer. She told another teacher who had had the disease about the diagnosis before heading home to her husband, Brian. (The couple lives in Dalton and have two daughters: Dominique, 23, and Kimberly, 21.)

Kelley felt a lump on her chest sometime before then, scheduling an annual exam at Baystate Breast & Wellness Center in Springfield. An MRI came up negative, but she demanded an ultrasound. A six-centimeter tumor was visible.

"Had I not pushed for that ultrasound to be sure, who knows what would've happened," she said.

In July, she had a mastectomy in Boston at one of Dana-Farber's locations. The results indicated that she needed further treatment, so she told Allendale parents in a letter that she was dealing with health challenges. She also reached out to Baker, who retired last year after serving as principal at Crosby Elementary School, to help on days when Kelley couldn't come in.

Kelley is now in the midst of an eight-treatment, every-other-week program at Berkshire Medical Center. Her first one was scheduled for Aug. 31, but the principal didn't want to miss the first day of school, so she pushed it to Sept. 5.

"It was important to me to open the school building and see the students," said Kelley, who attended Allendale and has worked there since 2001, becoming principal in 2014.

While she works as much as she can — she'll be at the school on Tuesday before a 1 p.m. appointment, for example — she recognizes that dedication isn't the only quality that allows her to continue in her position.

"Some people can be very ill with these treatments," she said. "I'm fortunate and lucky right now that I'm doing well. That doesn't mean I feel well all the time, but I'm doing well."

Monday's events made her feel better. During the interview, a student brought a bracelet that her mother had made for Kelley. The principal said one of the ways the school cultivates kindness is by calling compliments and other warm acts "bucket-fillers."

"I told them all they definitely filled my bucket today," she said.