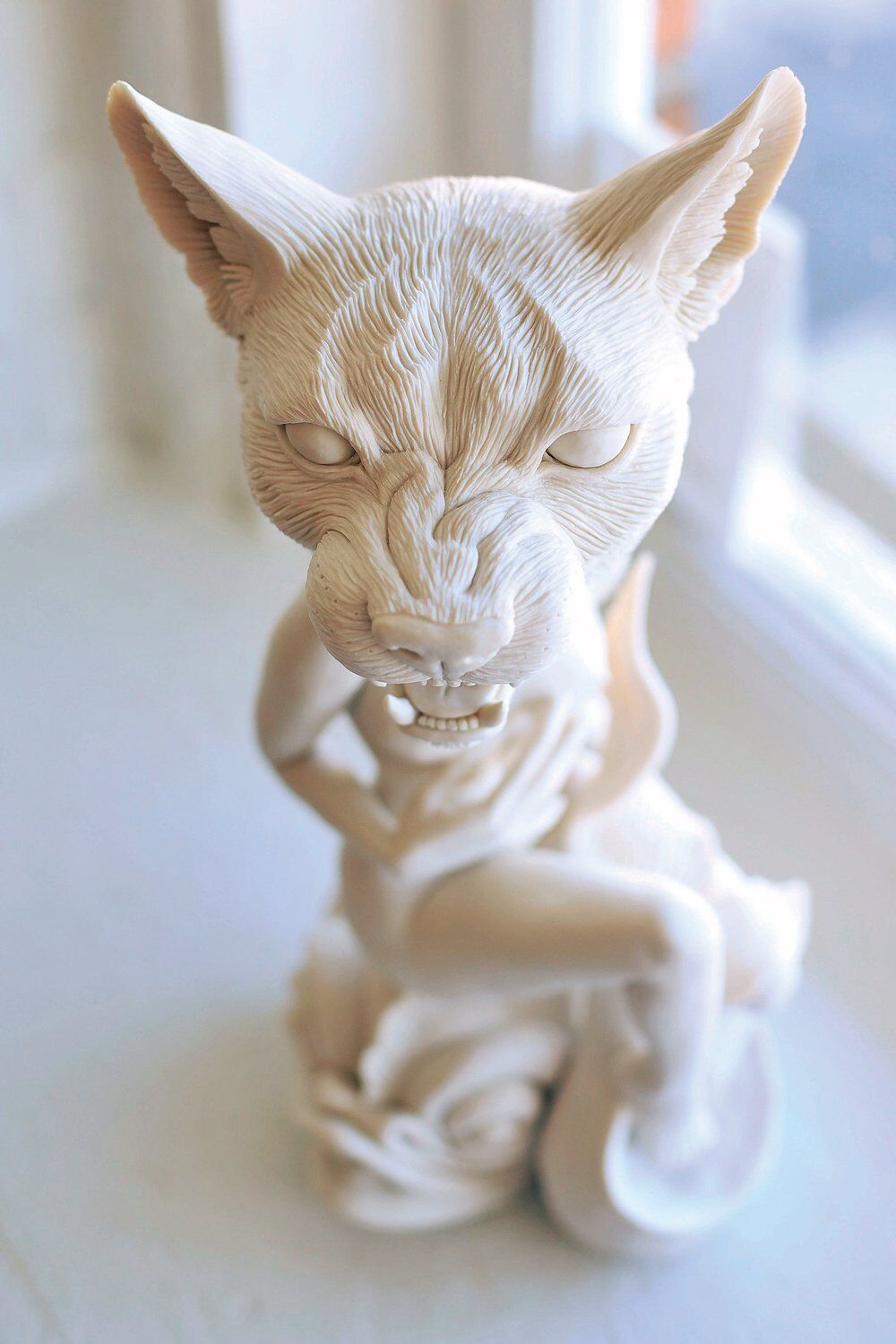 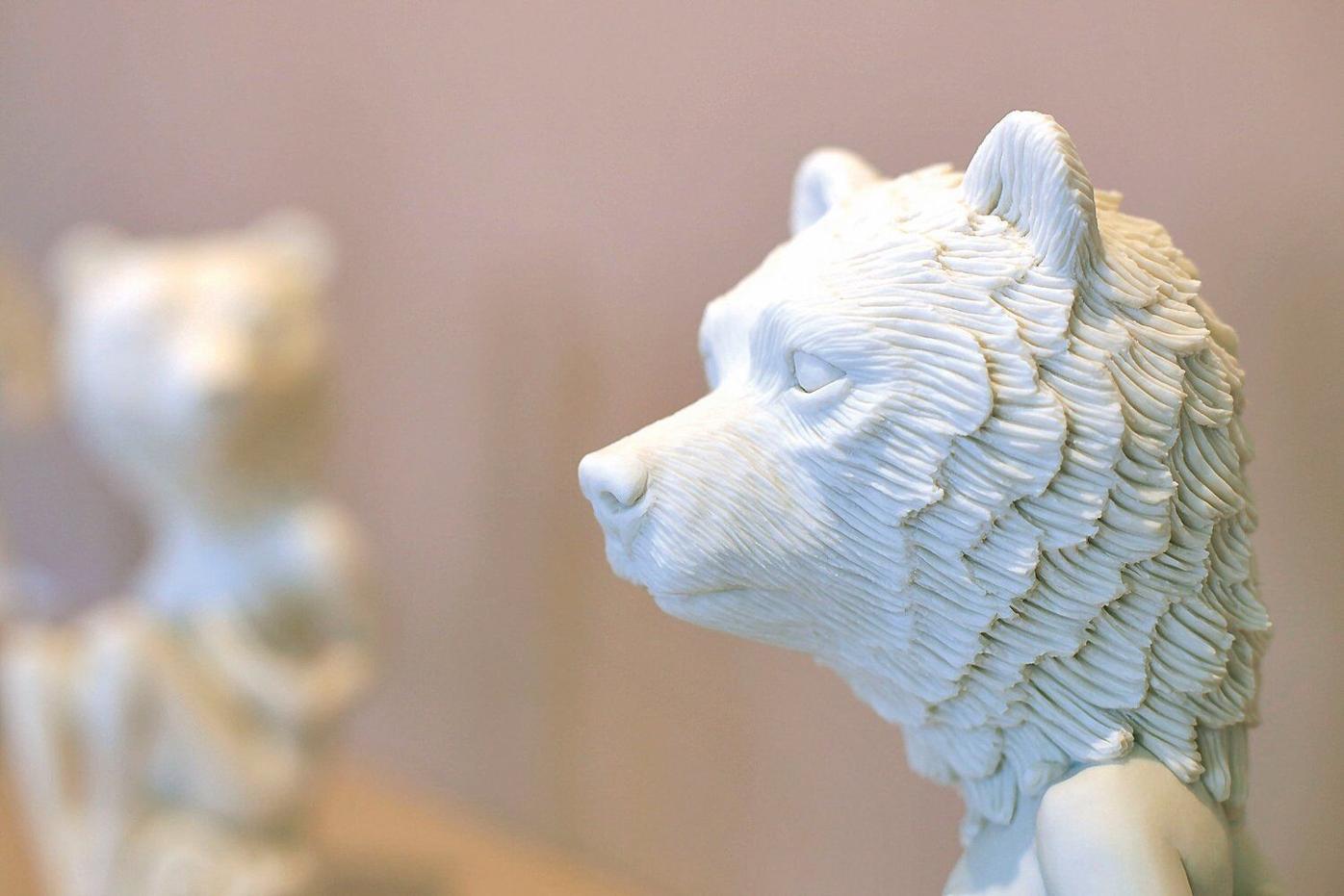 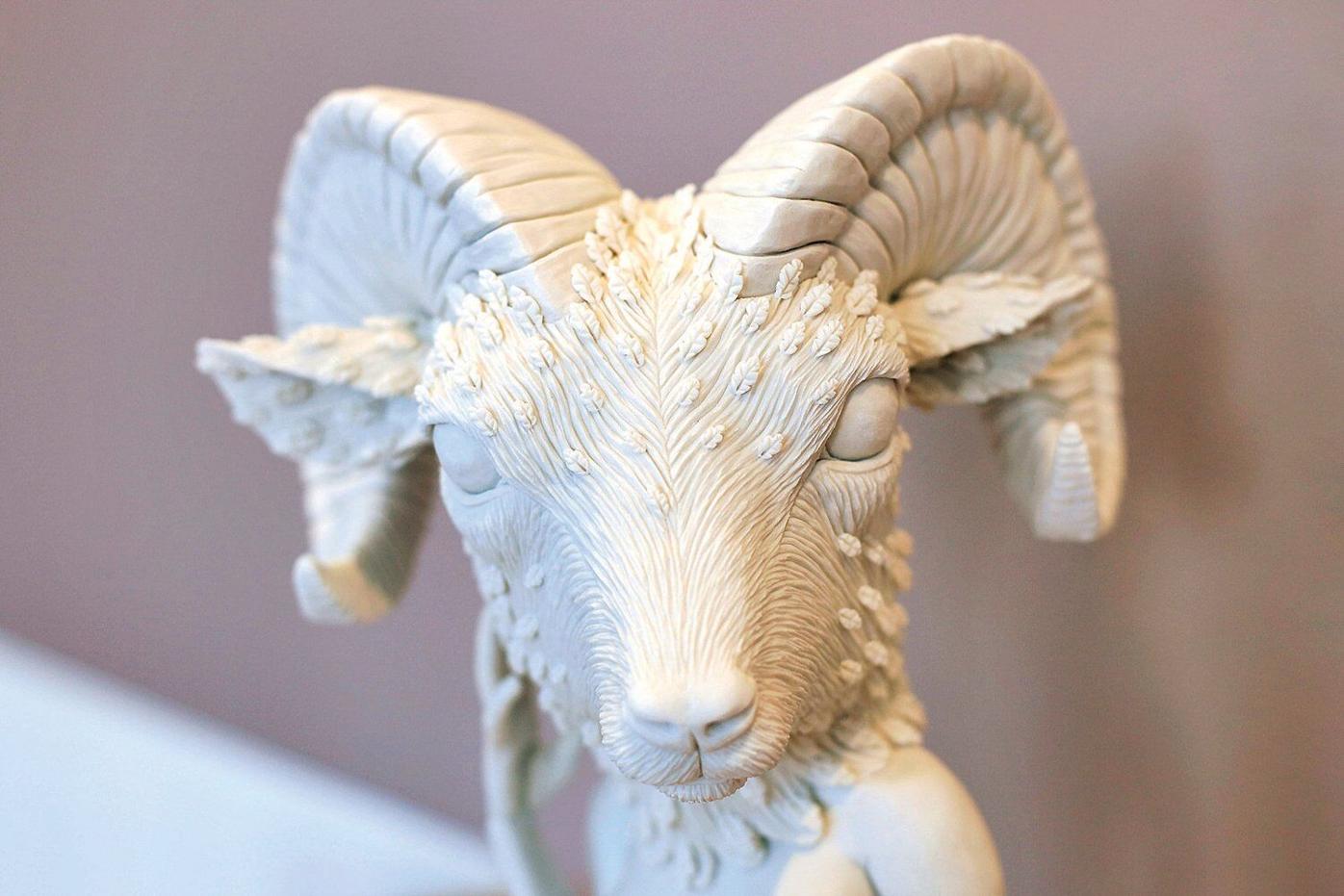 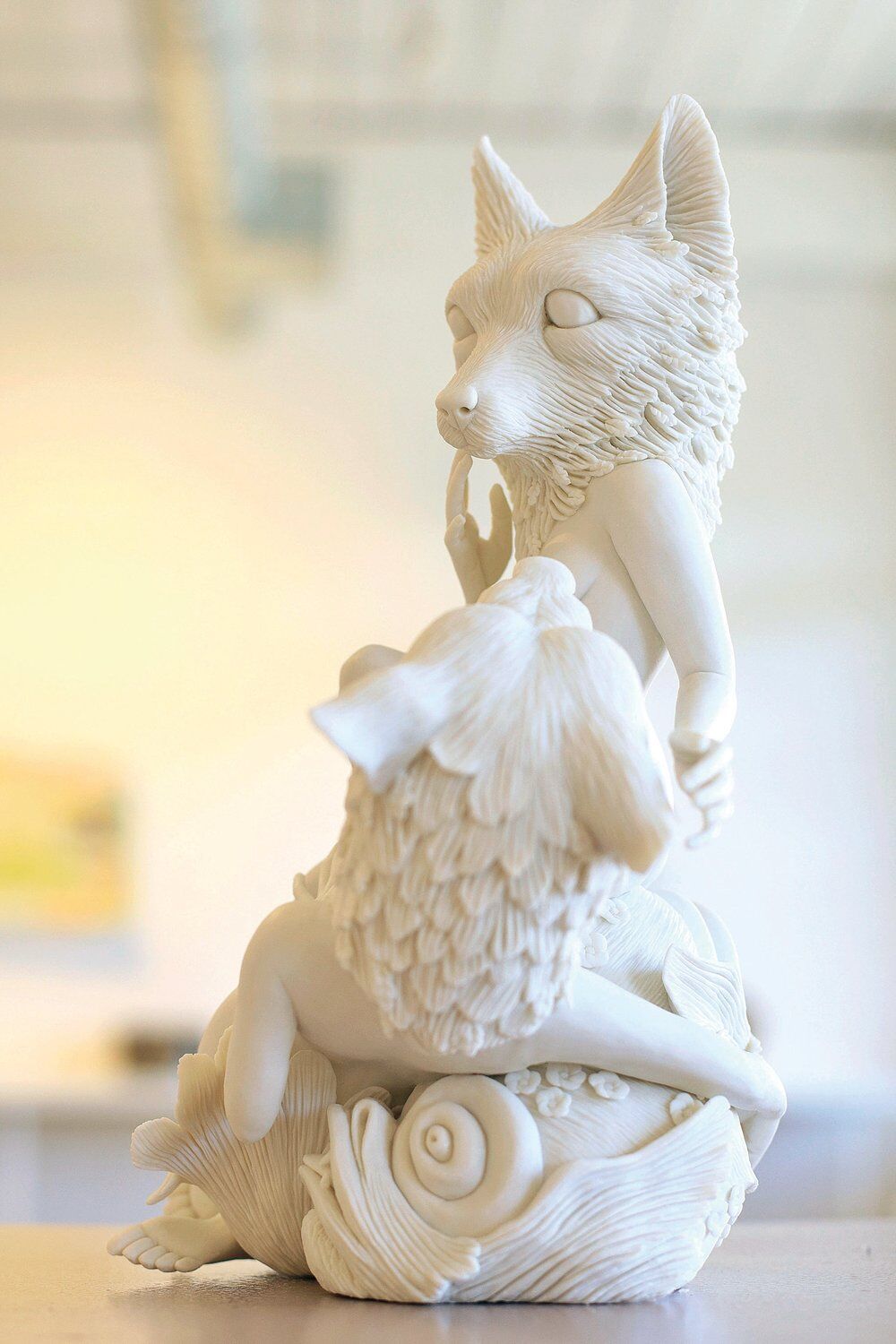 Crystal Morey's "Venus on the Waves" exhibition of porcelain sculptures is on display at the Ferrin Contemporary Gallery in North Adams through Nov. 2. 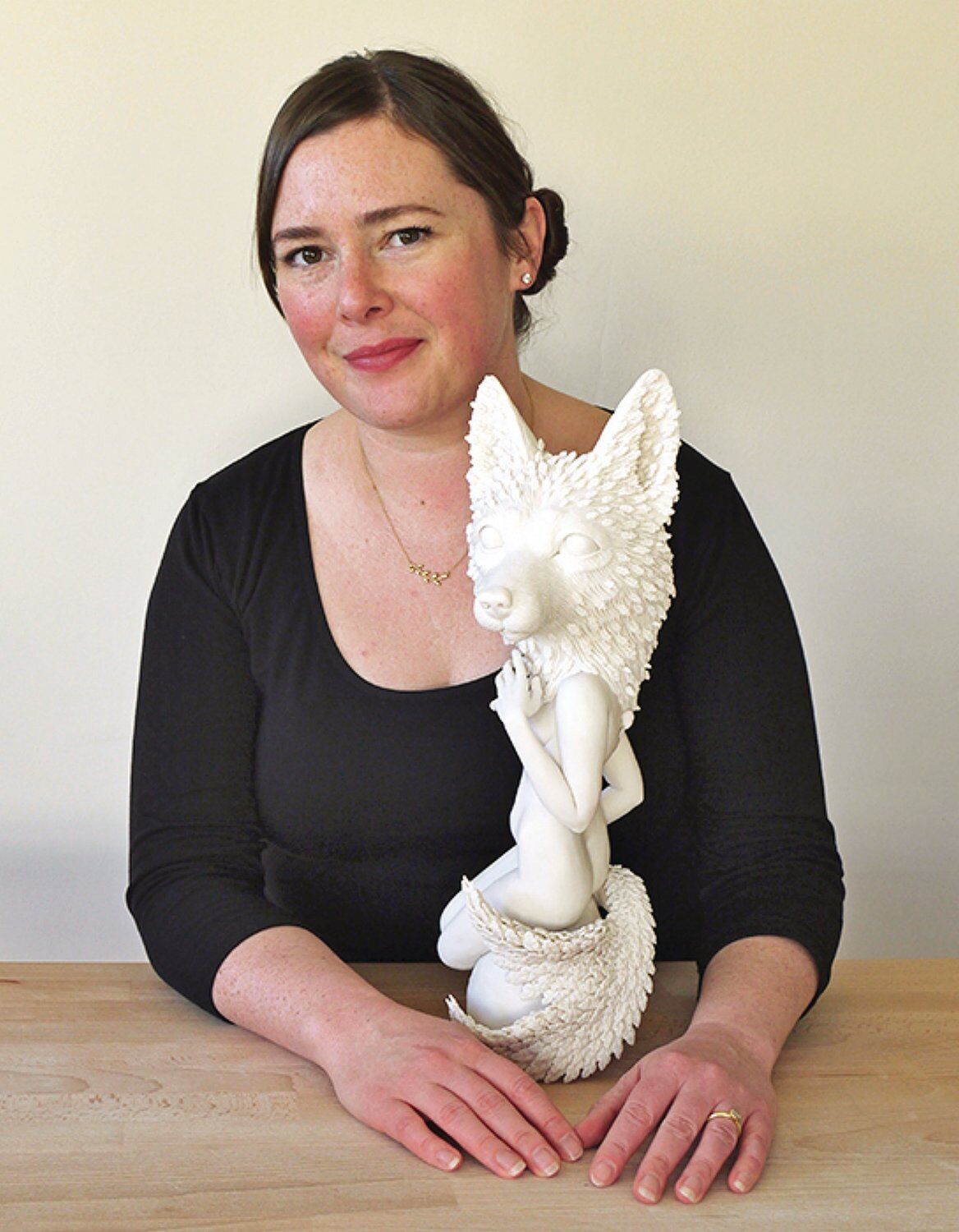 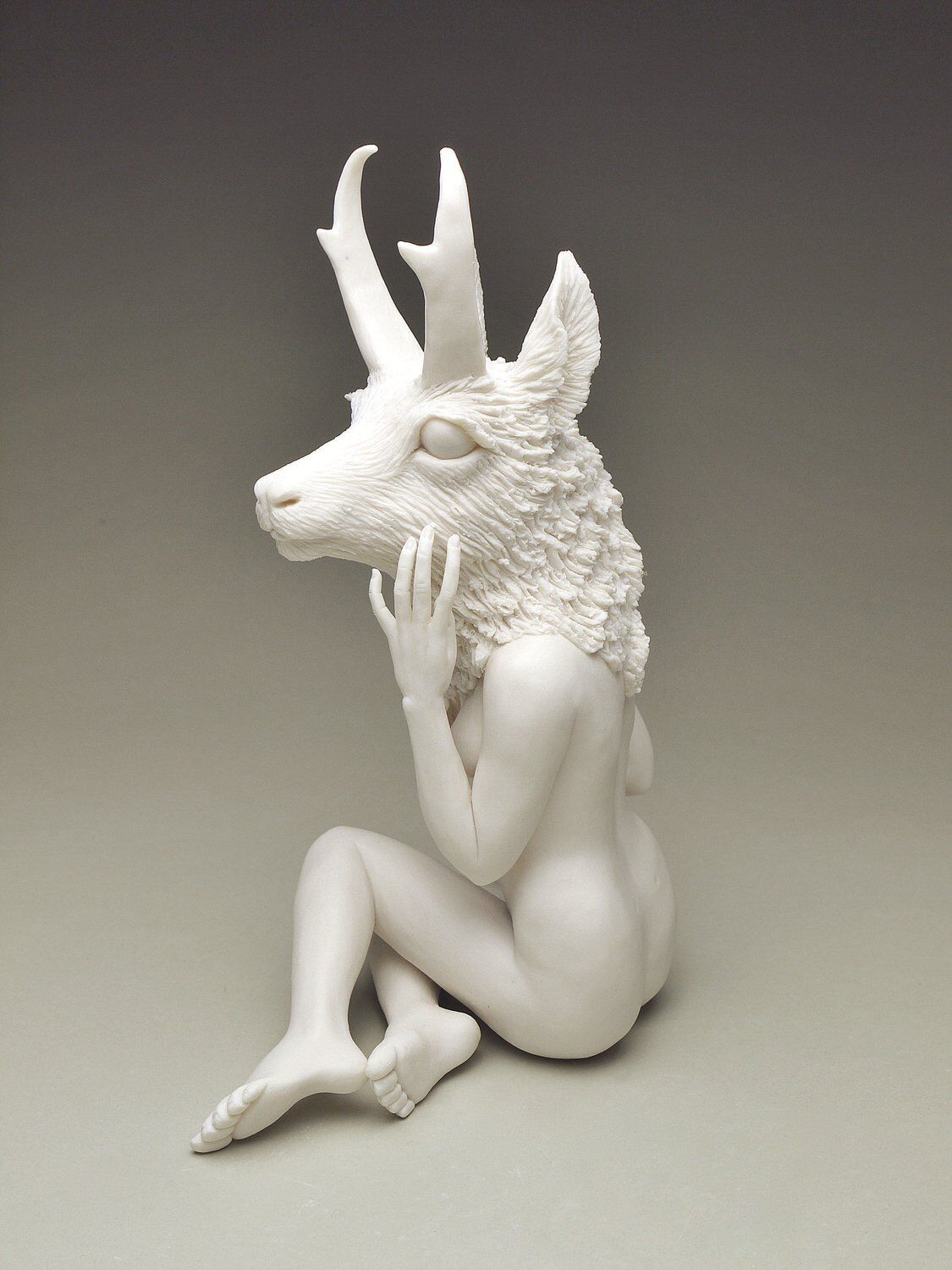 Crystal Morey's "Venus on the Waves" exhibition of porcelain sculptures is on display at the Ferrin Contemporary Gallery in North Adams through Nov. 2.

NORTH ADAMS — To gaze upon artist Crystal Morey's delicate, highly-detailed porcelain statues is to take a trip back to a time when goddesses were worshiped and loomed large.

In her East Coast debut, "Venus on the Waves," which opened Saturday at Ferrin Contemporary, the Oakland, Calif.-based pop surrealist presents a show of wolf, deer, mountain lion and rabbit-headed female figures that look as if they belong among the goddesses of ancient pantheons.

Small in scale, her animal-human hybrid figures are reminiscent of tutelary deities, house guardians and magical talismans. An unseen force undulates from their stark white nakedness, transforming their romanticized female forms into vessels of strength and power, whether intertwined with one another or posed alone.

Inspired by 18th-century sculpture and paintings of the Baroque and Rococo periods, the deity-like figures are the intersection of Morey's two passions: art history and nature.

"There are two major branches of where I spend my time looking and researching. One is thinking and looking at contemporary environmental issues, like human expansion and consumption, and how we are affecting the world around us and the creatures that inhabit those spaces we are changing," Morey said during a recent phone interview with The Eagle. "I do a lot of work looking into different preservation and conservation stories about creatures, how we are impacting them and also ways for us to connect and learn about how we are changing our planet."

She also researches art history, looking specifically at Renaissance paintings, Baroque sculpture and the history of porcelain during the Baroque and Rococo art movements.

"Being an artist, you're the voice of your time; you're looking around and making a visual representation of what is happening. It's a way to connect to the past and past ways artists have represented what is around them throughout time," she said. "In art history, nature is such a huge component of that — seeing the natural elements around you; learning to render them, learning to dissect them and finding ways of really understanding what is around.

"I'm interested in that aspect and also, I find it interesting that throughout these time periods, nature is shown in a romanticized way. Nature is dirty and not always perfect, but we think of it as being this pristine, perfect place. During the Rococo and Baroque [periods], ornamentation and beauty, and making things that are luscious and intriguing and enticing, is really popular. What I have been doing is looking at that history, pulling from that visual language and tweaking it a little bit."

In her sculpture, "Sea Level Rise in Eden," Morey presents a hybrid female figure with an avian head, clinging to the Tree of Knowledge, apple in hand, as a snake slithers around a nearby branch. Beneath her precariously posed legs, a pile of discarded water bottles and other plastic rubbish lingers.

Her intention, she said, is to use visual formats of the past and combine them with contemporary content.

"It's my version of Eve, the snake and the apple tree, but then around the bottom everything is very meticulously and beautifully made in the Baroque genre, but instead of being lovely plants and rocks and flowers and shells, I've replaced them with single-use plastic items you would find in the ocean," Morey said. "It's the visual aspect of these past traditions, but redone in a contemporary way. I'm trying to pull the viewer in, but also add some contemporary content about how things are changing and how we are changing the world."

The relationship between humanity and the world at large has always been at the center of Morey's work, which, in recent years, has evolved from clay figures of contemplative women in natural environments, as seen in her 2011 collection "March into the Sea" to her 2014 collection, "Habitats Collide," made up women encased in animal bodies.

"Her sculptures look as if they've been plucked from your favorite fairy tale with each containing its own special narrative. Her ideas are intimate and personal, exclusive to her upbringing ... What's key is she doesn't get carried away with sentimentality; if she did, it would gloss over the most important part, the message. There's humanity in nature and the twist is that her surreal sculptures sober us to that reality," a 2016 Hi-Fructose magazine profile said of her work.

At the time her artist profile appeared in the contemporary arts magazine, Morey had just begun her transition from clay to porcelain, a medium she now works in exclusively.

"Clay has so many different histories and, depending on the clay you use that speaks to a different history. Porcelain is this beautiful, luscious material. I think there are very few materials that you can just leave raw and porcelain is one of those," she said. "I love the idea that I am just able to directly put in emotion and content and detail and it's just done ... There's also the immediacy of being able to sculpt directly into the real material and have it be complete at that point. It has this really fine delicacy to it; its slightly translucent. and I think it elevates the level of the idea behind the work because its this beautiful material."

Porcelain also allowed her to advance her work as an artist, allowing for the creation of "really, really fine detail" and smooth, realistic surfaces.

The switch, from clay to porcelain, has not only elevated her work, but allowed her to further her inquiry into 18th-century female archetypes and our relationship with the natural world, its environments and habitats.

"It's easy for us to think we are not connected to all of these habitats, but really we are. Everything is so interconnected at this point," Morey said. "I hope that when people see my work, they think about that, how we're impacting the land, the animals and the water. Hopefully, it creates some empathy for those creatures and spaces."