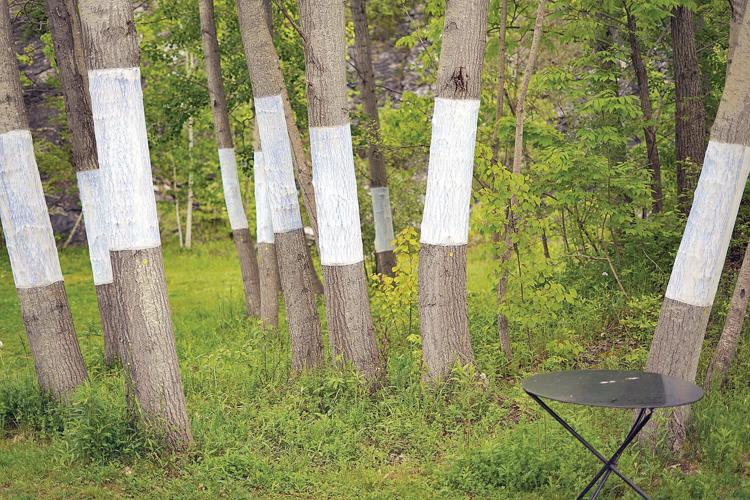 At TurnPark in West Stockbridge, trees are wrapped in painted cloth as part of artist Kathleen Jacob's process. 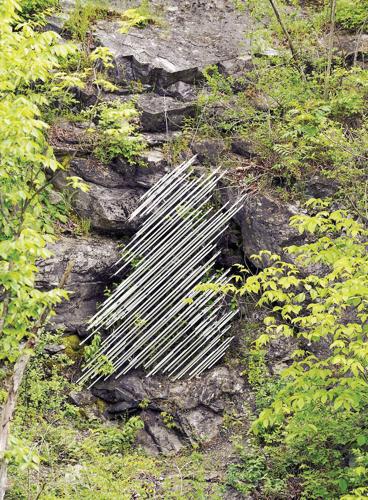 A sculpture by the late Alexander Konstantinov is installed in the quarry that TurnPark is built on in West Stockbridge. 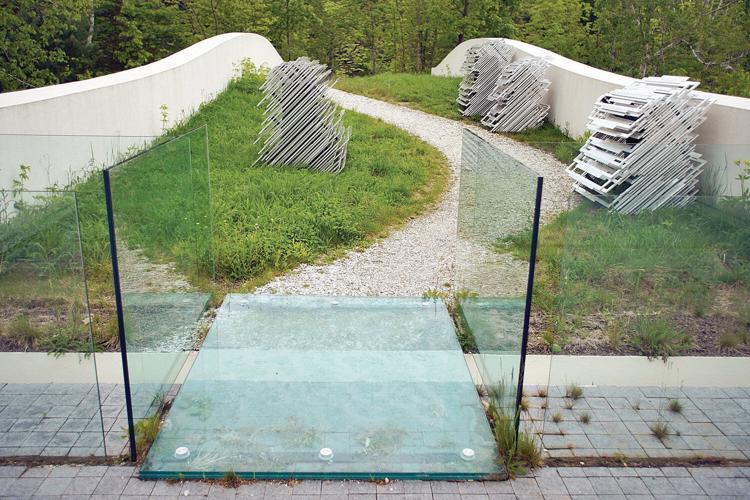 The Gatehouse at TurnPark was created by the late Alexander Konstantinov and includes his aluminum sculptures. The building is built to blend into the landscape. 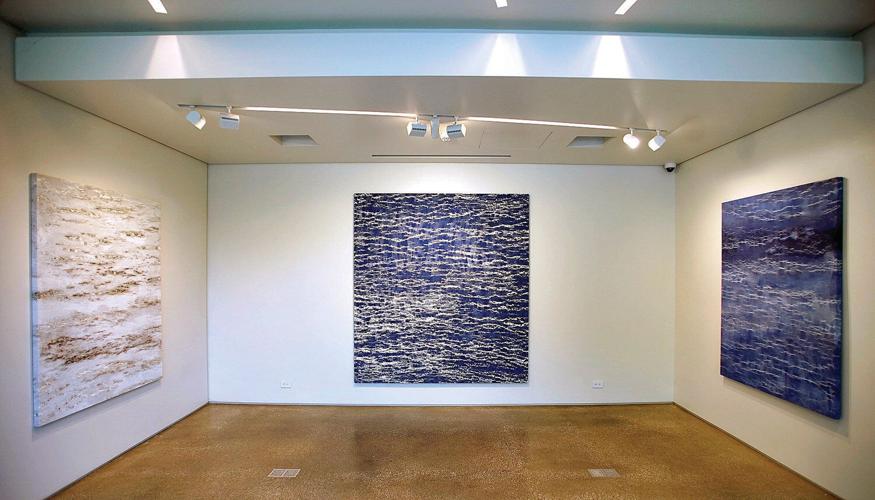 The exhibit "Echos," by Kathleen Jacobs, includes oil on linen paintings made by wrapping painted cloth around trees and letting weathering influence the process,

At TurnPark in West Stockbridge, trees are wrapped in painted cloth as part of artist Kathleen Jacob's process.

A sculpture by the late Alexander Konstantinov is installed in the quarry that TurnPark is built on in West Stockbridge.

The Gatehouse at TurnPark was created by the late Alexander Konstantinov and includes his aluminum sculptures. The building is built to blend into the landscape.

The exhibit "Echos," by Kathleen Jacobs, includes oil on linen paintings made by wrapping painted cloth around trees and letting weathering influence the process,

WEST STOCKBRIDGE — If you position yourself just so inside TurnPark Art Space's Gatehouse Gallery these days, you can see artistic process in one eye and finished product in the other. Through the indoor exhibition space's glass windows, trees with white-and-blue canvas fragment wrappings can be spotted lining the beginning of the 16-acre sculpture park's outdoor path. Inside the gallery, completed oil-on-linen abstract landscape paintings fill the walls. Both of Kathleen Jacobs' stages of art-making are intended for public consumption.

"The unique situation is that, here, you can actually see the pieces being made, where they come from and the result," Jacobs said during a Wednesday tour of "Echos," one of the West Stockbridge site's shows currently on display.

The Great Barrington artist makes rubbings on the canvases, creating a "matrix" for the work that she finishes in her studio. Different types of barks yield different impressions; in the show, paintings sprung from a black walnut, maple, poplar and white pine. Jacobs' lens extends far beyond trunks, though.

"I feel that I collaborate with the trees, but these paintings are really not about the trees," she said. "They're about the lines that I feel are inherent in natural forms that repeat themselves in many different ways, from wood to water to stone to air."

This fluidity between natural elements can also be found in "Flow / Flux / Fold," an exhibition of Liane Nouri and Jaanika Peerna's creations that, like "Echos," is on view through Oct. 31. Both belong to curator Grigori Fateyev's focus on landscape this season, though confining that interest to one year doesn't capture TurnPark's perpetual link to the surrounding land. That is part of Alexander Konstantinov's legacy. The site's lead architect died in May, leaving behind the gatehouse's wavy white roof and the park's winding, rising and falling paths that draw from the surrounding peaks' undulation.

"He extracted the lines from the Berkshire hills. It's the curve," said Katya Brezgunova, who founded TurnPark with Igor Gomberg in 2017.

Coupled with the death of Russian sculptor Nikolai Silis, an inspiration for the site, in late 2018, Konstantinov's sudden, health-related loss has been personally challenging for the TurnPark's founders and other team members.

"Alexander was our friend," Brezgunova said, noting that they "started from scratches" with him in designing the site.

Fateyev will help ensure that Konstantinov's architectural vision for TurnPark endures. The owner of Hillsdale, N.Y.,-based Art Forms Architecture worked alongside the late architect, as well as architect Ekaterina Vlasenko, to turn a former quarry into an artistic landscape that includes meadows, a 65-foot cliff and a lake. For access to the grounds, visitors first stop at the gatehouse, which Fateyev likens to a sculpture you can move through and around. Konstantinov also wanted to make sure visitors could traverse its roof. The curved, grassy surface offers a view of the surrounding hillside as well as some of Konstantinov's last sculptural pieces. Like wind-blown blinds, "Wandering Rocks" partially obscures unsightly building equipment. The installation extends across the grounds to the side of the cliff, where one final "rock" rests, referencing the site's history. Konstantinov worked on the series for three weeks in March, according to TurnPark's Facebook page.

"The New England spring weather — wind, snow, and rain — made no influence on his plans," a TurnPark Facebook post notes. "Each day he went out with his tools, and worked on. Exactly three weeks later, we installed the last of the sculptures, and drank a glass of wine to celebrate the success of another undertaking. This was perfectly in character for Alexander."

Fateyev said that Konstantinov's last piece, which involves a sliced tree trunk near the property's entrance, will likely be finished this summer and displayed during a commemoration of Konstantinov.

For now, other art at the site will pay homage to Konstantinov's affection for landscape. In "Flow / Flux / Fold," Peerna uses mylar to capture the movement and energy within natural elements on one side of the Barn Gallery.

"She's very much about channeling the chaotic," Fateyev said of the Estonia-born artist.

On the other half of the space, Nouri's painted boxes capture the colors of vistas from her Hillsdale home. The garage-like structure's shadows are in conversation with them.

"The color mixtures are subtle in order to make the viewer look more closely. Is it a shadow or is the color different?" Nouri writes of her work in the exhibit's pamphlet.

Nouri is one of the many locals who have helped Jacobs generate her frottage pieces by allowing the artist to wrap trees on their properties. Ultimately, Jacobs derives much of these paintings' subject matter from her time piloting planes.

"A lot of these paintings for me are about what I'm seeing when I'm flying," she said. "I do aerobatics, and I work in what's called a box between the clouds. ... The titles are all taken from these five-letter codes, which don't mean anything, but they often become words like 'ECHOS.'"

While Jacobs' early drawings and paintings depicted landscapes, the artist's arboreal process has allowed her to capture the natural world, and all of its elements, with a broader brush.

"She's a landscape painter that slowly turned to abstraction to get closer to landscape," Fateyev said.