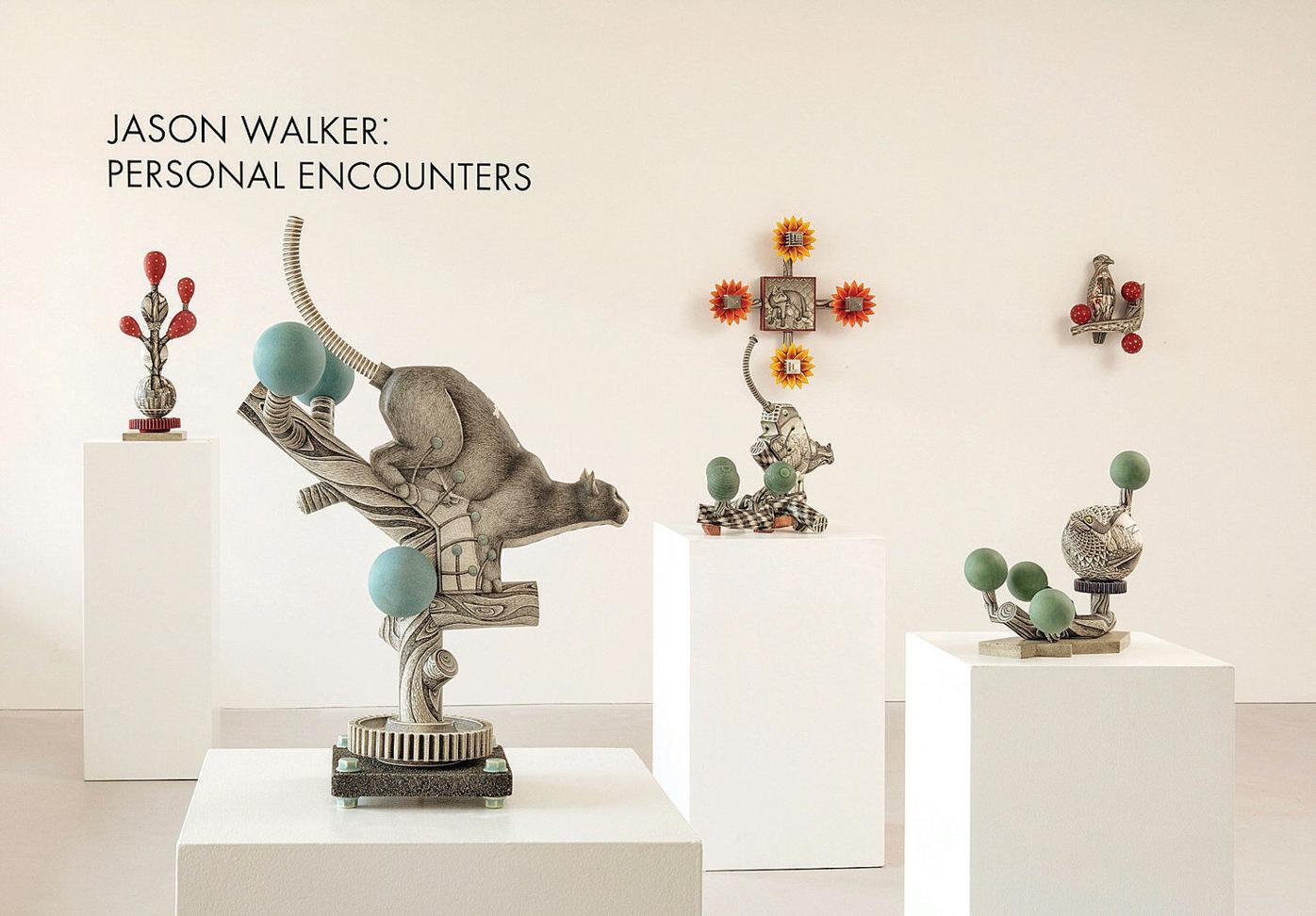 Jason Walker's exhibit "Personal Encounters," is on view through Aug. 10. 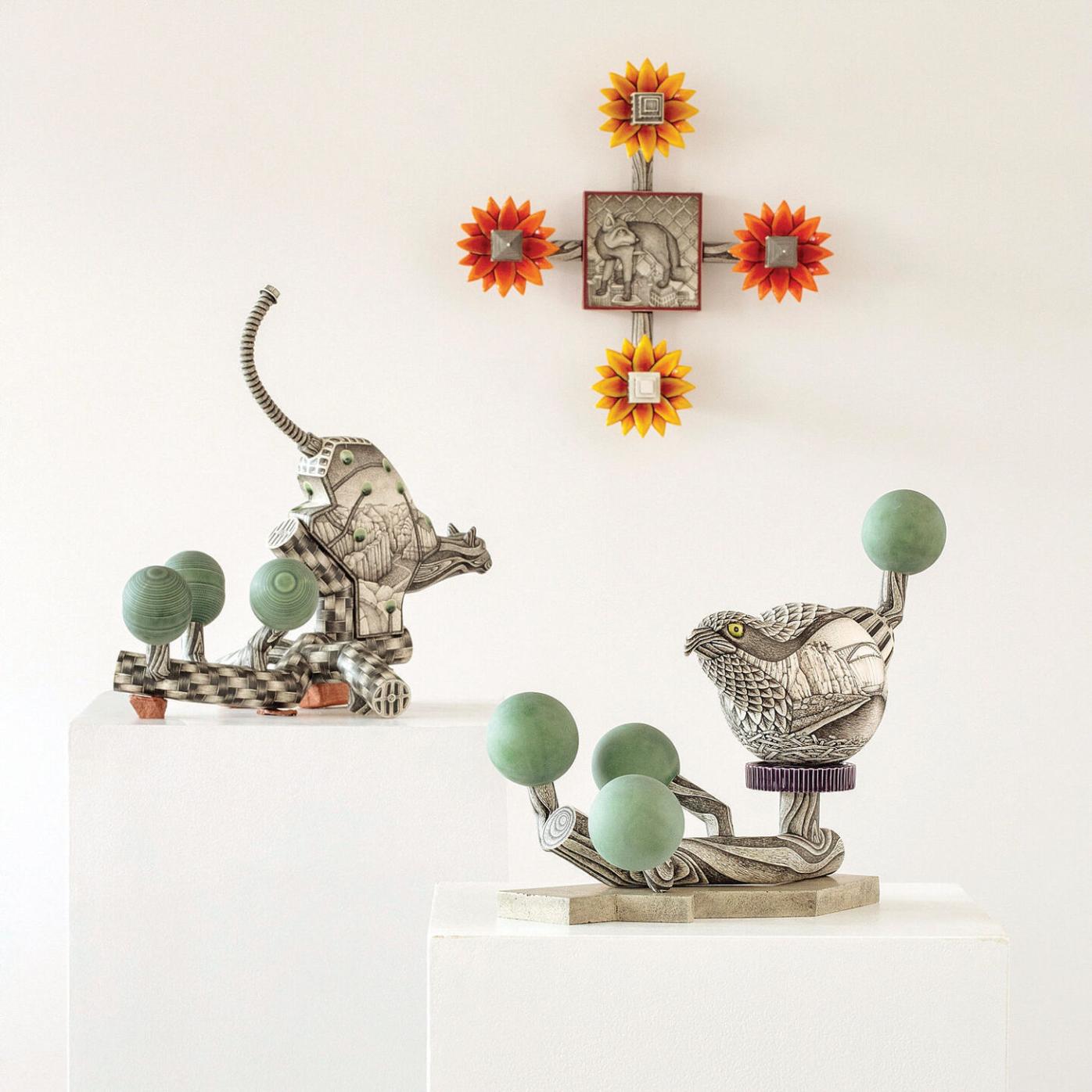 Jason Walker's work explores the tension between man and the man-made, and humankind's understanding of its place within that tension.

Jason Walker's exhibit "Personal Encounters," is on view through Aug. 10.

Jason Walker's work explores the tension between man and the man-made, and humankind's understanding of its place within that tension.

NORTH ADAMS — The large feline in Jason Walker's sculpture, "Cougar Encounter," looks ready to pounce. Its sinewy form is perched on a tree limb; as if moments from leaping. Its gaze is laser focused on unsuspecting prey just out of our view.

And yet, its prey may be the man, looking skyward, fear in his eyes, painted on one side of this mountain lion. A reminder of the vulnerability of mankind.

"Cougar Encounter" is part of a new body of work by Walker, "Personal Encounters," a show based on the artist's personal experiences, as well as his exploration of the ever increasing tension between man and the man-made, as well as humankind's understanding of its own place within it all. The show is on view at Ferrin Contemporary through Aug. 10.

Built on a foundation of his own experiences, Walker crafts a narrative of nature and technology, co-existing in a landscape filled with cougars, osprey, coyotes and trees that is held together by circuits, gears and orbs reminiscent of light bulbs. His sculptures in turn are canvases on which he paints scenes filled with man-made objects — bridges, dams, skyscrapers and roads.

"Most of it is all places I've come from, places and landscapes I've visited and explored, just experiences I've had," Walker said in a recent phone interview.

The most influential of those experiences happened while Walker was mountain biking in Oregon. A large animal leapt on to the trail in front of him, disappearing into the nearby brush. The animal, he would quickly discover, was a mountain lion.

"I was a bit disconcerted being that close to an animal that could just take me out. That whole experience gave me that feeling of vulnerability; in a sense, being part of the food chain again," he said. "It's that kind of experience, that corporeal experience, that I'm trying to play with because, in our digital age, our experiences are so mediated. I think a lot of us miss out on these experiences that let us know we're alive; that we're mortal beings."

He purposely populated the show's imagery with cougars and osprey, he said, because both are hunters.

"Osprey hunt fish primarily. They can't hunt humans, they're too small, but they're hunters. Mountain lions don't necessarily hunt humans, but they do have the ability to take us out if they want to," Walker said. "I'm trying to introduce that kind of an idea to play against the idea of the mediated experience. So, I've combined a little bit of graphic imagery, from a circuit board or something in there. I don't know if they are super overt, this circuitry imagery, but I'm trying to play and to juxtapose these images of biology and this digital kind of world in a way."

This new exploration, he said, plays naturally into the basic premise his work has been exploring for years, the idea of "What is nature?"

"How do we define that anymore? It's such an elusive word and I've learned you can basically define it in two different ways," Walker said. "You can say that everything comes from the planet, so pretty much everything is natural. What's the distinction between a nest built by birds or a home built by humans? It's all biologic organisms gathering material and reorganizing them into different shapes or things. That definition is probably more of an Eastern philosophy."

A definition that fits more with the ideology of Western culture, that of the United States, he said, defines nature as "defined as something in its essential form, untouched and untainted by the hand of a human being."

"That definition gave me pause. It's interesting that we would find something to be natural as long as human's haven't manipulated it. In a sense, that separates us from this idea of nature and builds two different arenas. You have this idea of nature over here and the idea of civilization, human-constructed environment, over there."

In some pieces, such as "Bloom," a wall-mounted sculpture in which four bright yellow and orange blooms branch out of a central tile, he explores the junction where these two arenas overlap. Here, the crossover takes the form of skyscrapers bursting forth from the center of each bloom. And in the center of it all, painted on the tile, is a coyote, its paws resting on the tops of skyscrapers, a chain link fence behind it.

"The coyote is one animal that has figured out a way to live on the fringe of a human-constructed environment. Just playing with that idea, is this being considered natural any more?" he said.

And while his basic premise of defining nature is still running throughout this new body of work, Walker is pushing his own boundaries with each piece.

"I'm trying to play a little bit more and introduce this idea of 'What is the one link that connects human beings to nature?' I think that link is that we have bodies; that we are mortal. We can and will perish," he said. "That is the one constant that will probably never change, even with all the technology we create — we will always be this mortal being. That's why I'm so interested in this corporeal experience, having your body be present, as I was in this encounter with a mountain lion."