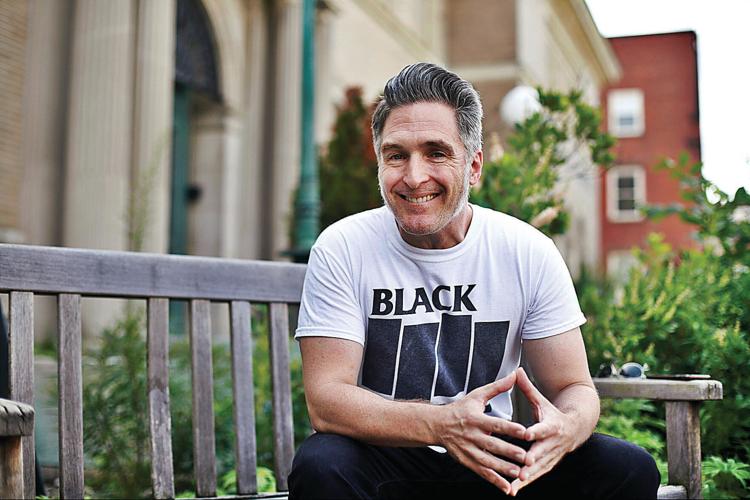 Graphic designer Mark Tomasi has created a series of memes satirizing the opposition to the Berkshire Museum's plan to sell off 40 artworks - including two Norman Rockwell paintings. He said he feels like the museum is "taking a beating" over the issue. 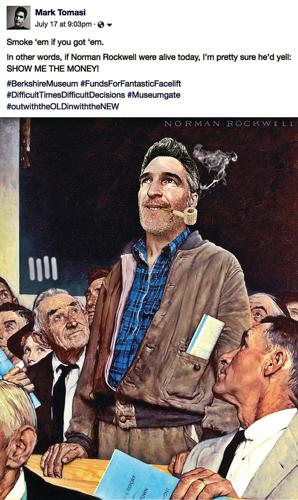 Mark Tomasi's face appears on a meme based on Norman Rockwell's 1943 painting "Freedom of Speech." 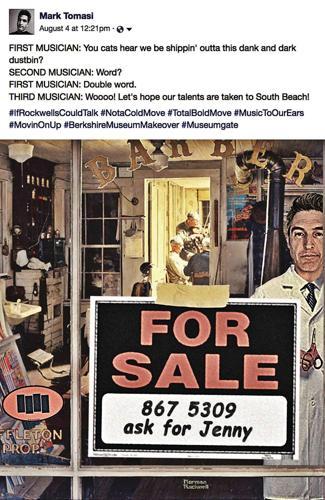 One of the memes created by Mark Tomasi is based on Norman Rockwell's "Shuffleton's Barbershop," which is among the 40 works the Berkshire Museum is planning to sell. 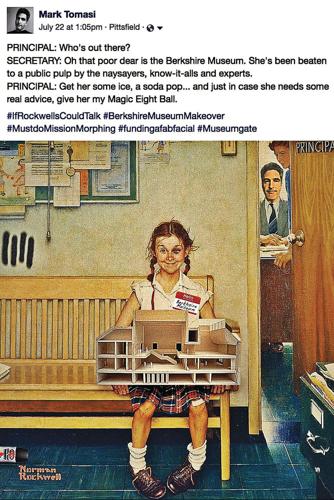 A meme based on Norman Rockwell's "The Shiner" depicts the Berkshire Museum as a girl who has "been beaten to a public pulp by the naysayers."

Graphic designer Mark Tomasi has created a series of memes satirizing the opposition to the Berkshire Museum's plan to sell off 40 artworks - including two Norman Rockwell paintings. He said he feels like the museum is "taking a beating" over the issue.

Mark Tomasi's face appears on a meme based on Norman Rockwell's 1943 painting "Freedom of Speech."

One of the memes created by Mark Tomasi is based on Norman Rockwell's "Shuffleton's Barbershop," which is among the 40 works the Berkshire Museum is planning to sell.

A meme based on Norman Rockwell's "The Shiner" depicts the Berkshire Museum as a girl who has "been beaten to a public pulp by the naysayers."

Editor's note: This article was updated on Aug. 14, 2017, to clarify Laurie Norton Moffatt's position on the proposed auction.

That is what graphic designer Mark Tomasi has called the controversy surrounding Berkshire Museum's plan to sell 40 works of art as part of its $60 million "reinvention plan."

And as a show of his support for the plan, Tomasi has released a series of memes online that satirize some of the opposition to the concept using the hashtag he came up with. A hashtag, denoted by the "#" symbol, is used preceding a word or phrase on social media to categorize a conversation or a topic.

"As much as I see the opposition's side of the story, the Berkshire Museum is in a major financial crisis where the staff and sustainability of the institution outweighs the assets," said Tomasi, who is active in the local art community. "Like Peter Lafayette mentioned in his Eagle letter, what good is the art if there are no walls?"

The museum last month announced the plan to sell the artworks to provide a $40 million boost for its endowment and pay for part of a $20 million renovation.

In the week following the news of the museums plans, first reported in The Eagle on July 12, two Rockwell paintings — "Shuffleton's Barbershop" and "Shaftsbury Blacksmith Shop" — were the only works museum leaders would disclose to the public. It has since released a list of all of the artwork that will be auctioned at Sotheby's New York starting in November.

Tomasi's images, many of which are based on Norman Rockwell paintings, are posted to his public Facebook page. The "digital darts," as he calls them, are his attempt to meld cultural observations and a creative pursuit.

They are also an attempt to bring levity to what has become a controversial decision, which has drawn both criticism and support by museum professionals from across the country who have spoken with The Eagle and submitted letters to the editor. The story also has been picked up by national and international news outlets, including The New York Times and The Telegraph in the United Kingdom, among many others.

Tomasi's desire to "stand-up for the little guy" inspired him to create his first "dart," his take on Rockwell's 1943 painting "Freedom of Speech."

The painting shows a man standing among a crowd to voice an unpopular view at Town Meeting. Although Tomasi said he was unaware of the painting's backstory, and that the connection to the growing controversy was coincidental, it was fitting.

Tomasi, who like Rockwell often includes his own image in his work, used Photoshop to insert a picture of himself into Rockwell's painting. He replaced the man's face with his own, and added a smoking, corncob pipe.

"Smoke 'em if you got 'em," Tomasi's caption reads. "In other words, if Norman Rockwell were alive today, I'm pretty sure he'd yell: Show me the money!"

But several members of Rockwell's family, as well as community members, have contended that the artist, who often championed the idea his paintings be on public view, would not want his works sold.

Museum leadership has said Rockwell did not place restrictions on the works when he donated them to the museum in the late 1950s and early 1960s.

But it is not just the sale of the Rockwells that have some people angry. Some art experts have said the list of pieces going on the block includes a who's who of 18th, 19th and 20th century American and European artists, including Albert Bierstadt, Alexander Calder and Rembrandt Peale. They argue that the works on the list are some of the finest that these artists created.

Museum leaders have said their decision was driven by financial necessity and that the museum will close within eight years without proceeds from the sale.

The idea of selling artwork to stabilize museum finances has long been the source of controversy in the art world. Professional museum ethics guidelines state that collection items should only be sold to purchase more work or care for other existing works. Because the Berkshire Museum's plans buck that position, three professional museum organizations have decried the decision and asked the museum to "pause" the sale. Others, such as, Laurie Norton Moffatt, director of the Norman Rockwell Museum, have said the sale should be paused so the community can help Berkshire Museum leadership arrive at a solution that might keep the works - many of regional significance - here.

Museum leadership has said while it understands those viewpoints, the majority of the public supports its plans and it will move forward with the auctions expected to begin in November at Sotheby's.

Tomasi said he has witnessed the museum "taking a beating" over its stance, which inspired another "dart," a spinoff of Rockwell's "The Shiner."

The image, which first appeared on the cover of the Saturday Evening Post in 1954, shows a young girl, smiling widely, whose tussled hair and black eye indicate she's been in a fight, waits outside the principal's office. The principal and a secretary peer at her through a cracked door.

In Tomasi's version, the girl, wearing a nametag that reads "Berkshire Museum," holds an architect's model of the renovated museum in her lap. Tomasi, playing the role of principal, is seen in the background of the picture talking with the secretary.

A passage written by Tomasi, and included in the Facebook post, imagines the discussion between the two.

"Principal: Who's out there? Secretary: Oh that poor dear is the Berkshire Museum. She's been beaten to a public pulp by the naysayers, know-it-alls and experts.

Principal: Get her some ice, a soda pop... and just in case she needs some real advice, give her my Magic Eight Ball."

Tomasi also parodied the conversation between a boy, a police officer and a waiter in Rockwell's "The Runaway." In Tomasi's version, the boy asks the adults why people are angry with the Berkshire Museum.

The police officer, in a lengthy, nuanced response, describes the disruption of the cultural DNA and subsequent disastrous impact some fear the museum's plans could have.

That response is distilled by the waiter: "What he means is, haters just gonna hate kid."

But he said he would prefer that hate not become a factor in the debate over the museum's plans.

Tomasi, who has lived in Pittsfield for 15 years, has strong ties to the arts community. He is president of Storefront Artist Project and Berkshire Art Association vice president. And he has a number of friends who are a part of "Save the Art," an opposition group that on Saturday protested the museum's plans.

"I can say I respectfully disagree," he said. "It is an amazing dialogue. I think people are afraid of the artwork going away, but they are also afraid of what it means for the rest of the art world if it is sold."

For weeks, a growing number of people have posted opinions in a closed "Save the Art" Facebook group. Its members have now launched a website.

While he welcomes the discussion, Tomasi said he has been discouraged by the personal attacks and negative tone of some of the Facebook comments posted there and elsewhere, including The Eagle's Facebook page.

"If you have something to say I would say do it creatively," Tomasi said. "There is a different way you can do it."

Leslie Ferrin, a North Adams gallery owner who helped launch "Save the Art," posted a statement that asked people to refrain from negative attacks on their page.

While some of the comments have discouraged Tomasi, he said he often reminds himself that the growing debate is a "first world problem."

"Nobody is dying, it's all mostly middle aged white people, and we are arguing over art," he said.

As a further reminder, Tomasi includes a number of references, some self-deprecating, to things he enjoys — references to "dummies," Skittles candy, and most notably the American punk rock band Black Flag.

Four black vertical rectangles, which resemble a waving flag, have long been its symbol. Tomasi said it is an appropriate one for those who support the museum's plans.

"Think about it — what does a white flag represent?" Surrender, he said. "A black flag means: Don't give up."