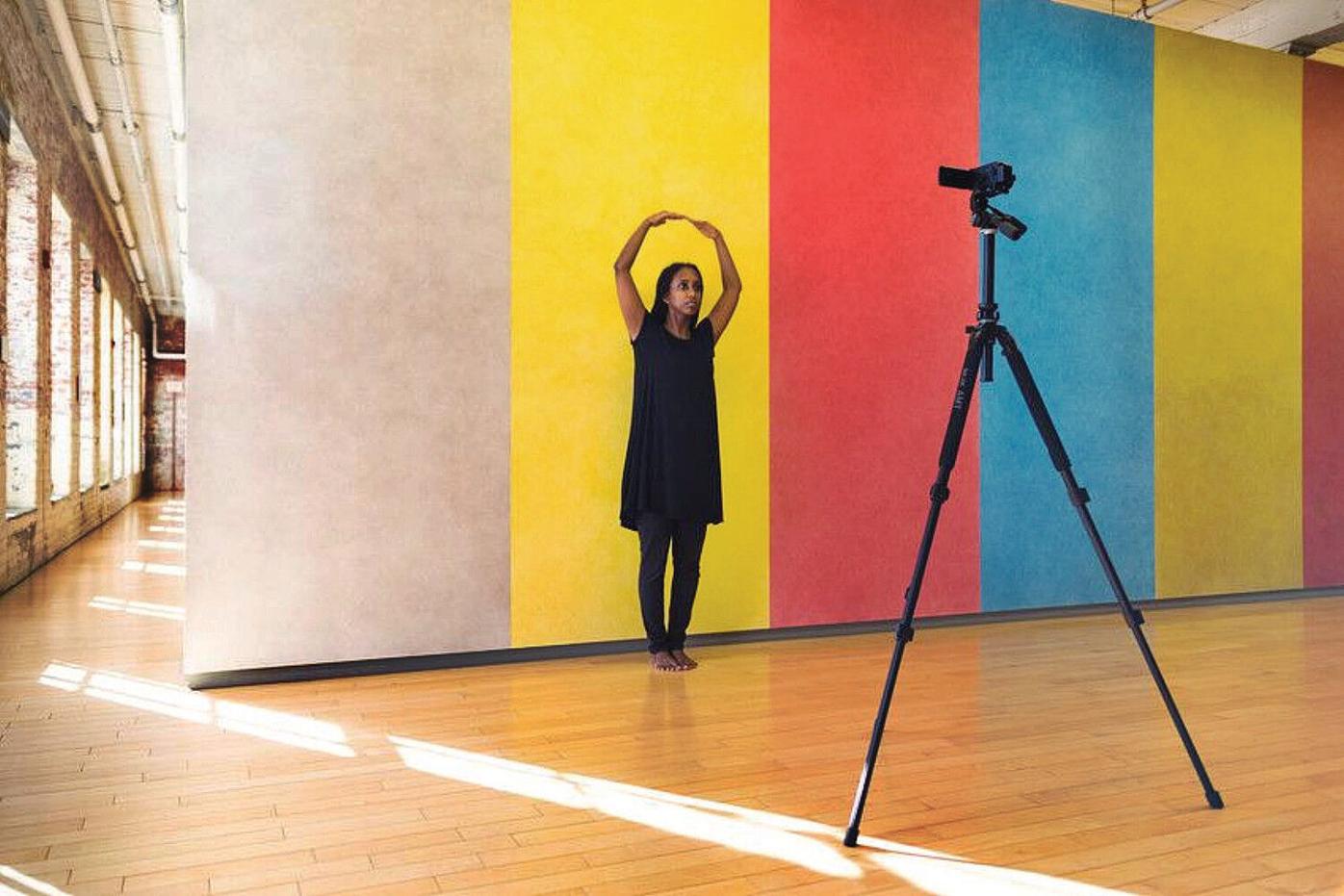 Artist Helina Metaferia is an artist in residence at Mass MoCA, where she is creating new work using Sol LeWitt's work as inspiration. 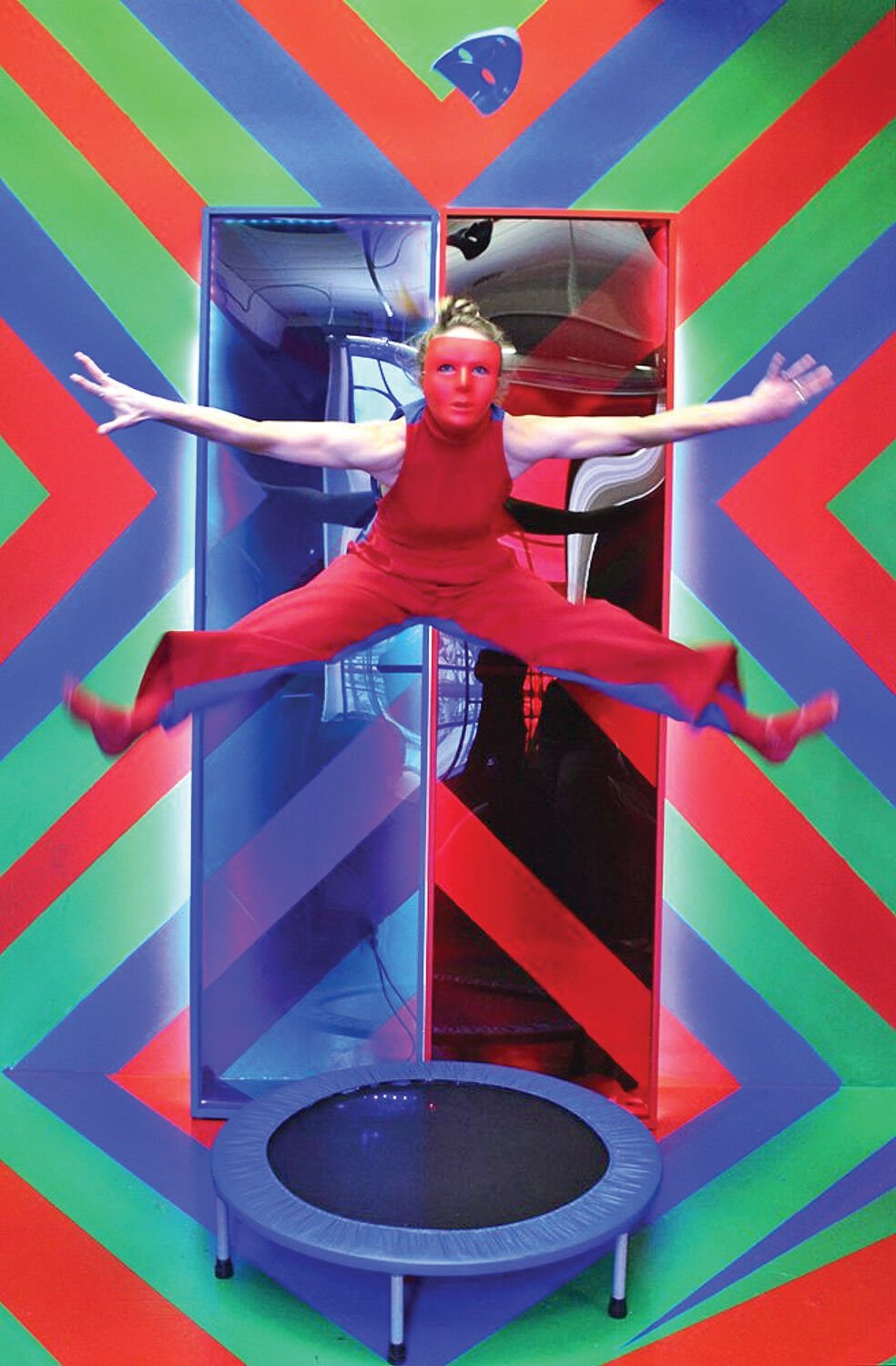 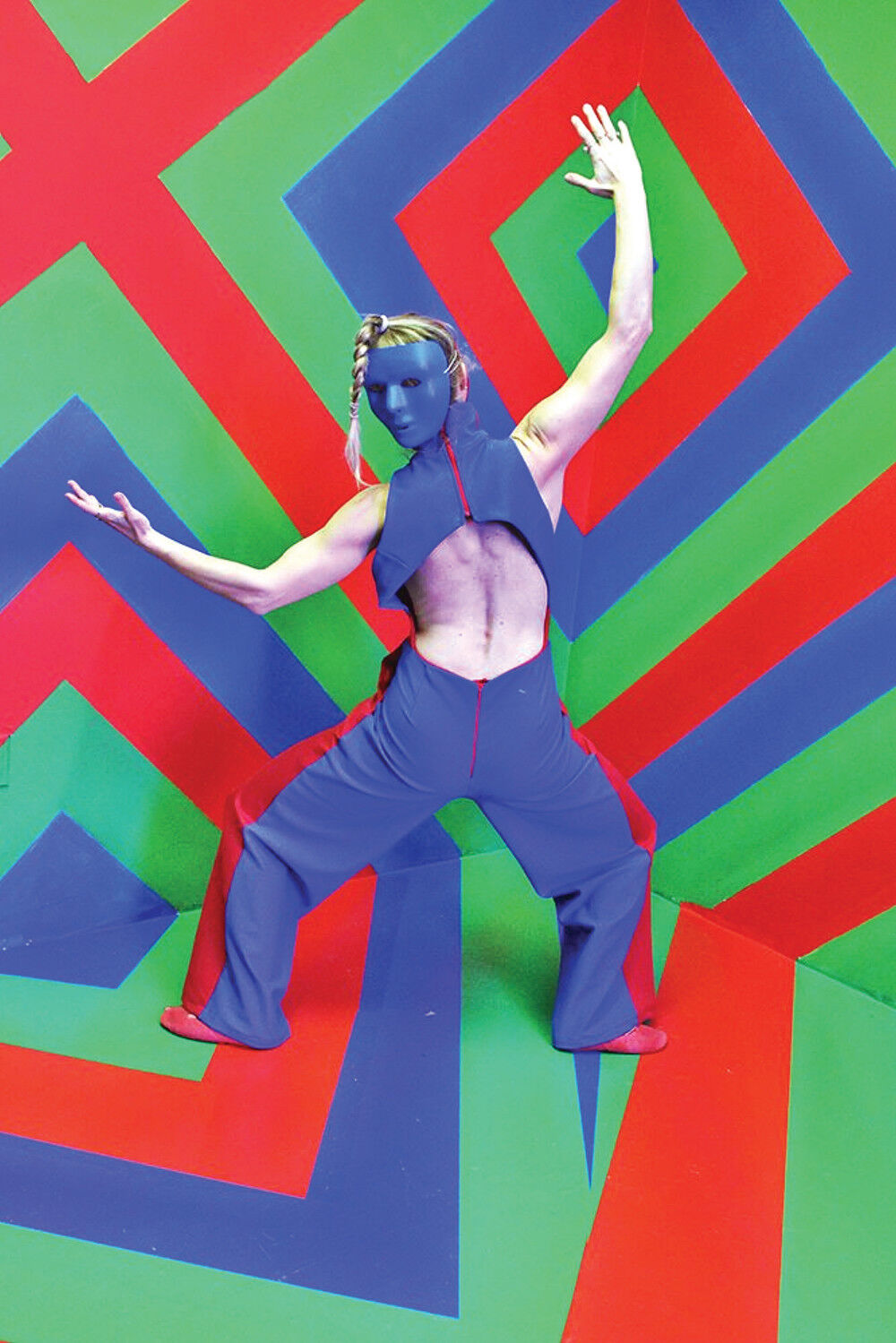 Patricia Brace, a performance artist from Maine, has turned her studio space in Mass MoCA into an obstacle course of bright colors and mirrors. 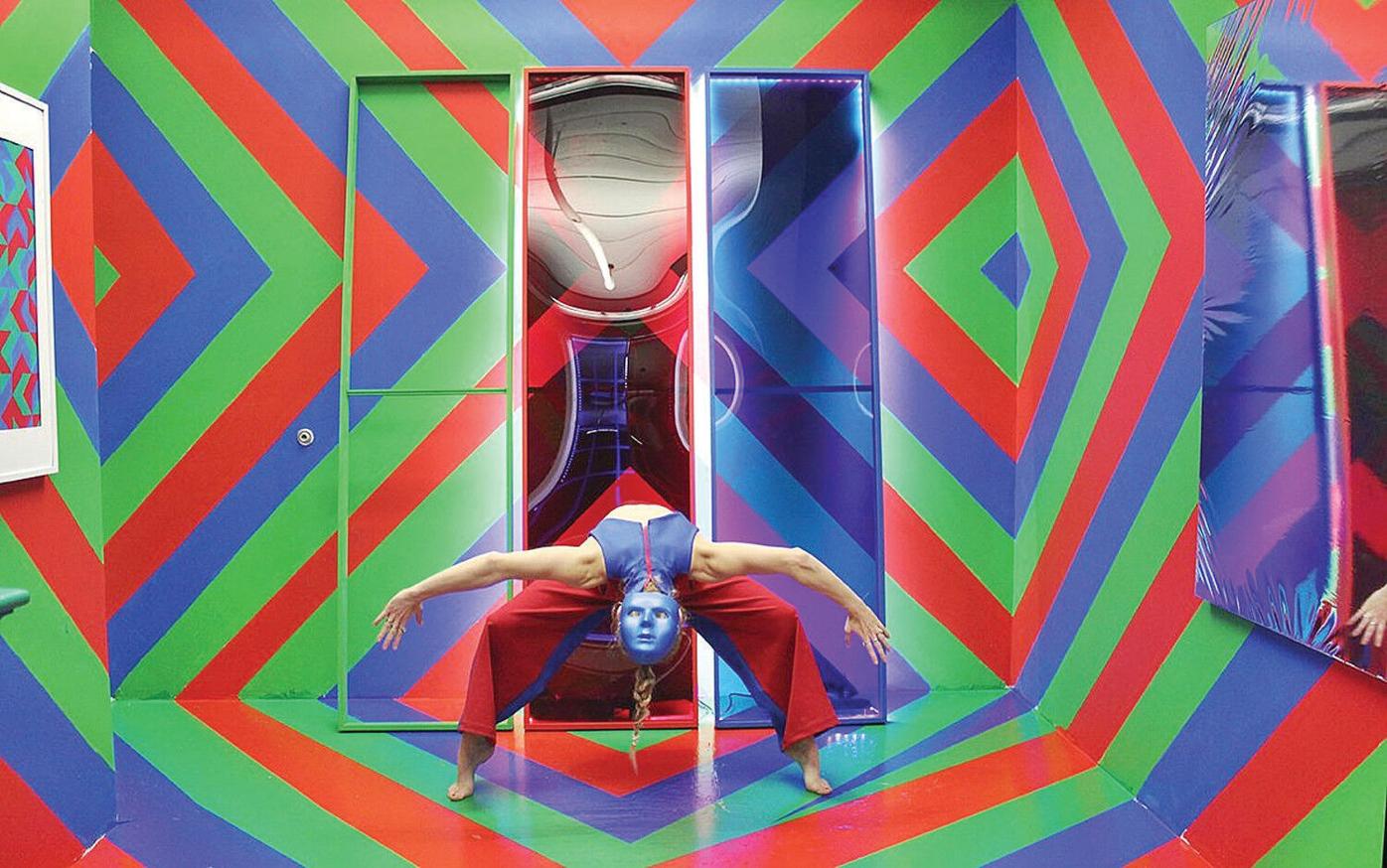 Artist Helina Metaferia is an artist in residence at Mass MoCA, where she is creating new work using Sol LeWitt's work as inspiration.

Patricia Brace, a performance artist from Maine, has turned her studio space in Mass MoCA into an obstacle course of bright colors and mirrors.

NORTH ADAMS — Carlos Rodriguez had gotten off a plane from Puerto Rico the day before. When he came from his Brooklyn studio into this quiet room in North Adams, he felt exhausted. He wanted a warm place.

So he made one. Across two walls he has hung cloth with a warm golden hue. He has sewn the panels into naturally uneven squares, like a landscape of fields running uphill. And here and there, he has set spirit levels — tools, he says, and measurements of a better past or a better future.

Rodriguez is one of the newest 10 artists in residence in the studios at Massachusetts Museum of Contemporary Art, and they will open their studios to visitors from 5 to 7 p.m. Monday.

The artists adapt their spaces flexibly and sometimes with brilliant color. Just after the new year, Patricia Brace turned hers into an obstacle course. With paint, vinyl and mirrors, she turned her small room into an optical illusion in red, blue and green, until the walls almost dissolved into the floor.

Brace is a performance artist from the coast of Maine, and she was creating a stage. Her fellow artists chose costumes and masks, and improvised with her around a set of props — a trampoline, a make-shift ballet barre, a set of steps, a yoga ball. She created the work in response to the presidential election, she said, and the absurdity she sees growing in daily life, and in her time there, her studio walls quivered like a fun house.

A week later, her studio has returned to a quiet, sun-lit room, where West Coast digital artist Tyler Stefanich looks out at the silver VW bus on the roof as he works on an app to locate artwork in L.A.

Since the fall of 2015, more than 300 artists have spent a week, or eight, in residence at Mass MoCA. The program launched as an experiment, said Blair Benjamin, director of the studios at Mass MoCA. The museum invites 10 artists at a time for an average of three to four weeks.

In the last two years, it has grown from 90 applicants in the first go-round to 500 in the latest pool. A committee of Mass MoCA curators and guest artists review each round of applications, he said.

The artists each have a studio and broad freedom to work in it. They can walk through the mill campus, rummage through local antique shops and use the equipment at the Makers Mill for screen printing and fiber art.

They can also wander through the museum for inspiration. With her brightly swirled walls, Brace was referencing Sol LeWitt's bright patterns in the galleries.

Now Helina Metafaria is performing with them directly. She is here from Washington, D.C., with permission from the artist's estate to create something new, evolving around his work. On film, wearing black clothing, she stands facing the black border of a LeWitt painting, almost merging with it until she moves quietly, showing a sleeve before a white-painted space or moving her body below the pigmented wall.

In her performance art, she said, she uses her body as a way to translate her experience with a work, and also with the museum, and beyond it with the art history that influences museums, curators and artists.

Her family is from Ethiopia, she said, and her own art history does not often appear in the American art world. So she asserts and creates it, and a residency like this can give her room to work — it is sacred space, she said, for an artist to work and make, think and be in awe of something.

In the studio next door, Tania Alvarez has been painting robes. Bright folds of cloth wind about a torso, belted in place. They have come to her here, she said. She came with a painting in progress, an interior scene with clinical, impersonal edges, like a hospital waiting room. She has spent time dealing with medical spaces recently.

Born in Spain, she spent her childhood in Hoosick Falls, N.Y., and now lives in Brooklyn. Here, for the first time in a long time, she has been alone with herself, with enough time, space, and quiet to think.

Her painted robes draw the eye to the knots that hold them closed.

"We have so much in common, and yet we're strangers," she said. "We spend so much time always passing by."

Many of the artists find Mass MoCA a communal place and an optimistic one, and it can give their work new momentum or direction.

"The museum is an incredible inspiration," Rodriguez said. "You realize how much the town has relied on it — twice."

As manufacturing changed in America in the 1980s and 1990s, he said, it left these huge empty spaces to create places of contemplation. The old brick buildings, bridges and courtyards have dimensions behind the art they shelter. And the place can give the work new meaning.

"Even if you've seen a work before, you have to see it here," he said.