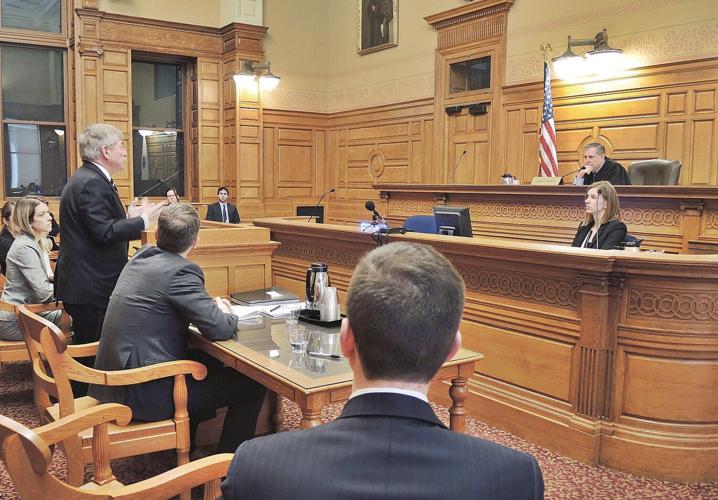 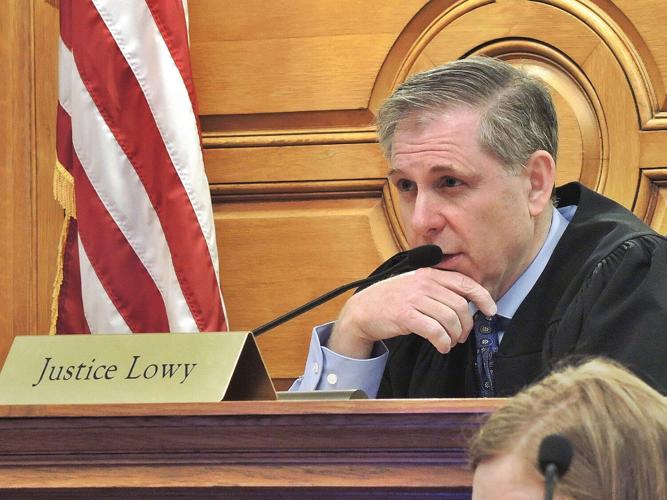 Justice David A. Lowy of the Supreme Judicial Court presides over Tuesday's hearing about the Berkshire Museum's proposal to sell works of art.

Justice David A. Lowy of the Supreme Judicial Court presides over Tuesday's hearing about the Berkshire Museum's proposal to sell works of art.

BOSTON — The jurist able to greenlight Berkshire Museum art sales gave both the institution and its critics reason for hope in a one-hour hearing Tuesday.

Justice David A. Lowy said that sentiment aside, the essential question before him — in the museum's petition to sell up to 40 works of art — is whether it would be "impracticable" for the 115-year-old Pittsfield museum to continue without an influx of $55 million.

That is the legal standard in the kind of case before him.

But Lowy also peppered lawyers with questions about the possibility of adding a layer of oversight to how that money would be used — a step the museum and attorney general oppose.

And the justice expressed surprise that the museum has found itself in such financial trouble and claims to face the need to close.

At the outset, Lowy asked the audience in a packed room in the stately John Adams Courthouse in downtown Boston to refrain from comments.

"There is a lot of emotion involved in this issue," Lowy said from the bench.

The Supreme Judicial Court for Suffolk County justice then urged four groups of attorneys to stick to legal issues, as each received 10 minutes to address the court.

No decision was announced. The question remains under advisement by Lowy.

At one point, the justice remarked on what appeared to be sharply diverging narratives in the briefs.

"I have to tell you, I'm watching two different movies," he said.

Lawyers were there to flesh out arguments already laid out in papers filed with the court since Feb. 9, when the museum ended months of litigation with Attorney General Maura Healey.

On that date, the museum submitted a so-called cy pres petition asking a single justice of the high court to allow it to sell art in order to survive.

Courtney Aladro, an attorney on Healey's staff, rose to support a presentation by museum lawyer William F. Lee in favor of the petition.

"We believe the relief requested is warranted here," she said.

Lee said the museum would not survive without resorting to the art sales. He urged Lowy to decide the matter in time for the museum to provide materials for a May auction at Sotheby's in New York City. He cited an urgency to meet an April 6 printing deadline, and to move ahead with sales.

"There is not time for us to wait another year or two or three," Lee said.

Aladro said the lawyers with Healey's office came to believe late in their investigation into the matter that the museum needed to raise $55 million.

"We know that not everyone agrees with the decision or the relief," Aladro told Lowy.

Their views were countered by attorneys representing sale opponents, who filed "friend of court" briefs asking Lowy to consider alternatives to the agreement reached between Healey and the museum.

Lowy acknowledged it is unusual for those who have filed "friend of court" briefs to be able to address a hearing — a development the museum and attorney general opposed.

But Lowy said that since the museum and the attorney general hold the same view on the petition before him, he wanted to expand the discussion.

Attorney Nicholas O'Donnell, representing three residents of Lenox, told Lowy that the works should remain in the Berkshires and said Tuesday's hearing was the "only obstacle left" in their departure from the region.

"Make no mistake, the art market is watching," O'Donnell said.

To which the justice replied: "Maybe they are, but I'm focused on this case."

Michael B. Keating, a Boston lawyer representing another group of Berkshire County residents, questioned how well the museum has been managed in past years, and challenged details of its "New Vision."

That plan, to emphasize multimedia displays in a heightened focus on natural science, would be paid for in large part by proceeds from the art sales.

"There is no real plan to show what the cost and income would be from the New Vision plan," Keating said.

On museum management in general, Lowy picked up on questions by Keating, asking, "Didn't I read that fundraising stopped?"

Keating's friend of court brief had asked Lowy to consider naming a "special master," or financial expert, to help ensure that proceeds from art sales are used appropriately.

When Keating first rose to speak, Lowy said: "I'm very interested in what you have to say about the special master." He asked how that arrangement might work alongside the attorney general's statutory role in overseeing nonprofits and public charities.

Aladro said later that her office is prepared to guide the museum through the art sales. The agreement calls for the museum to file reports while the sales are proceeding.

"That's the purpose of those reports to us," Aladro told Lowy, "to keep the museum accountable for those choices."

Keating offered that more oversight is needed. He urged Lowy to "either appoint an expert in museum management or appoint a special master to advise you as to the propriety of the various steps that the museum wishes to take."

Keating added, "We think this is such a momentous event that it requires the court to be a steward."

Lee disagreed, pointing out that Healey's office supports the petition, after a long inquiry.

"There is a steward and there is an expert — and it's the attorney general," Lee said. "They have ultimately the same responsibility they had a year ago, that we're fulfilling our charitable obligation."

When asked by Lowy what she thought of a special master in the case, Aladro said she didn't believe it was needed.

But Keating argued that the agreement between the museum and Healey's office lacks teeth.

"It has no strings attached whatsoever. One single report," he said of a required final accounting of the sales. "For the court to approve that would be extraordinary under circumstances like this."

"That role, with all respect to the attorney general, doesn't amount to much," he said.