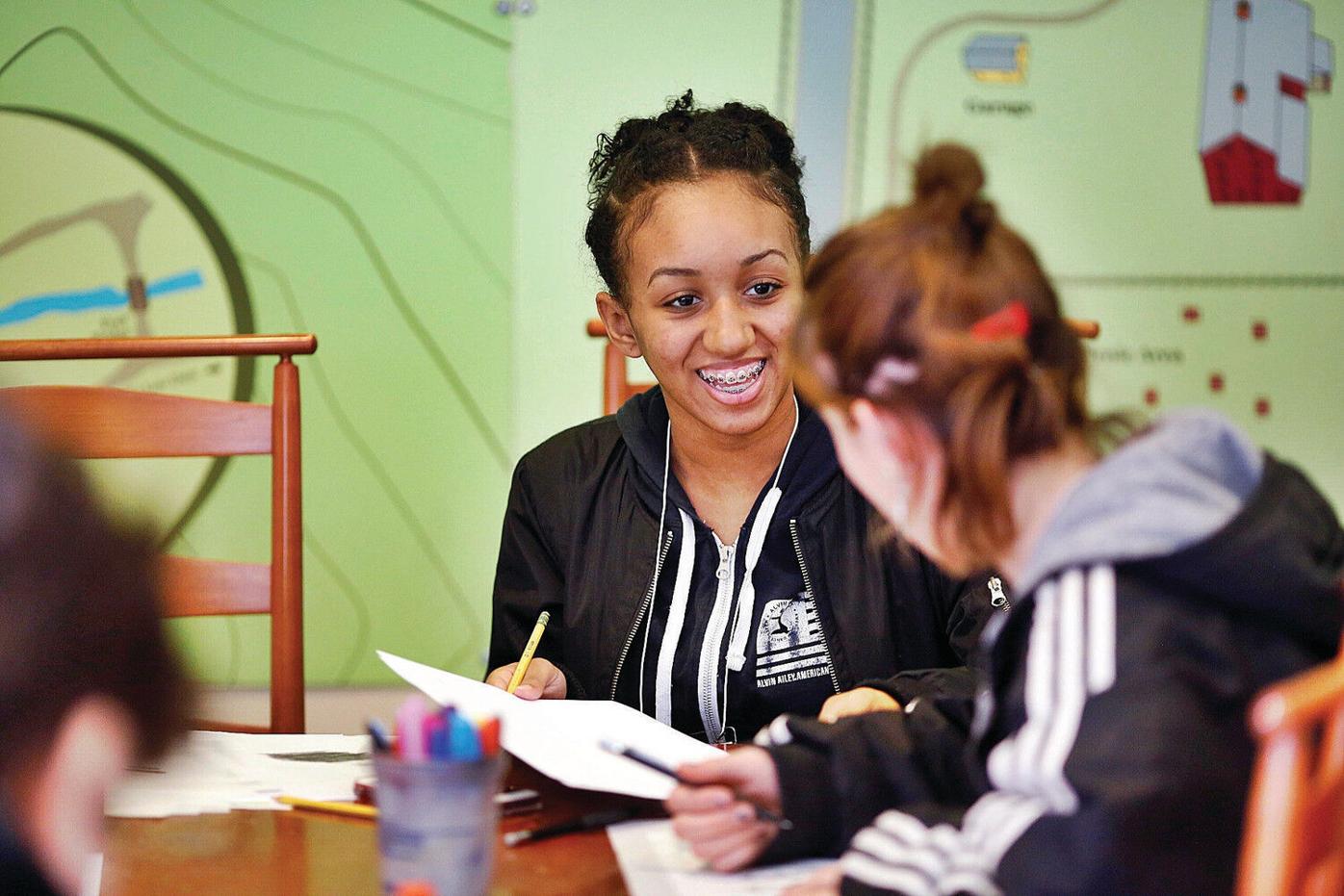 Kennedy Muway, rear, and Gigi Gardere of Bard College at Simon's Rock share a laugh Thursday, at a session titled "Art for Social Change" at Hancock Shaker Village in Pittsfield, during the annual 411 in the 413 Youth Conference. 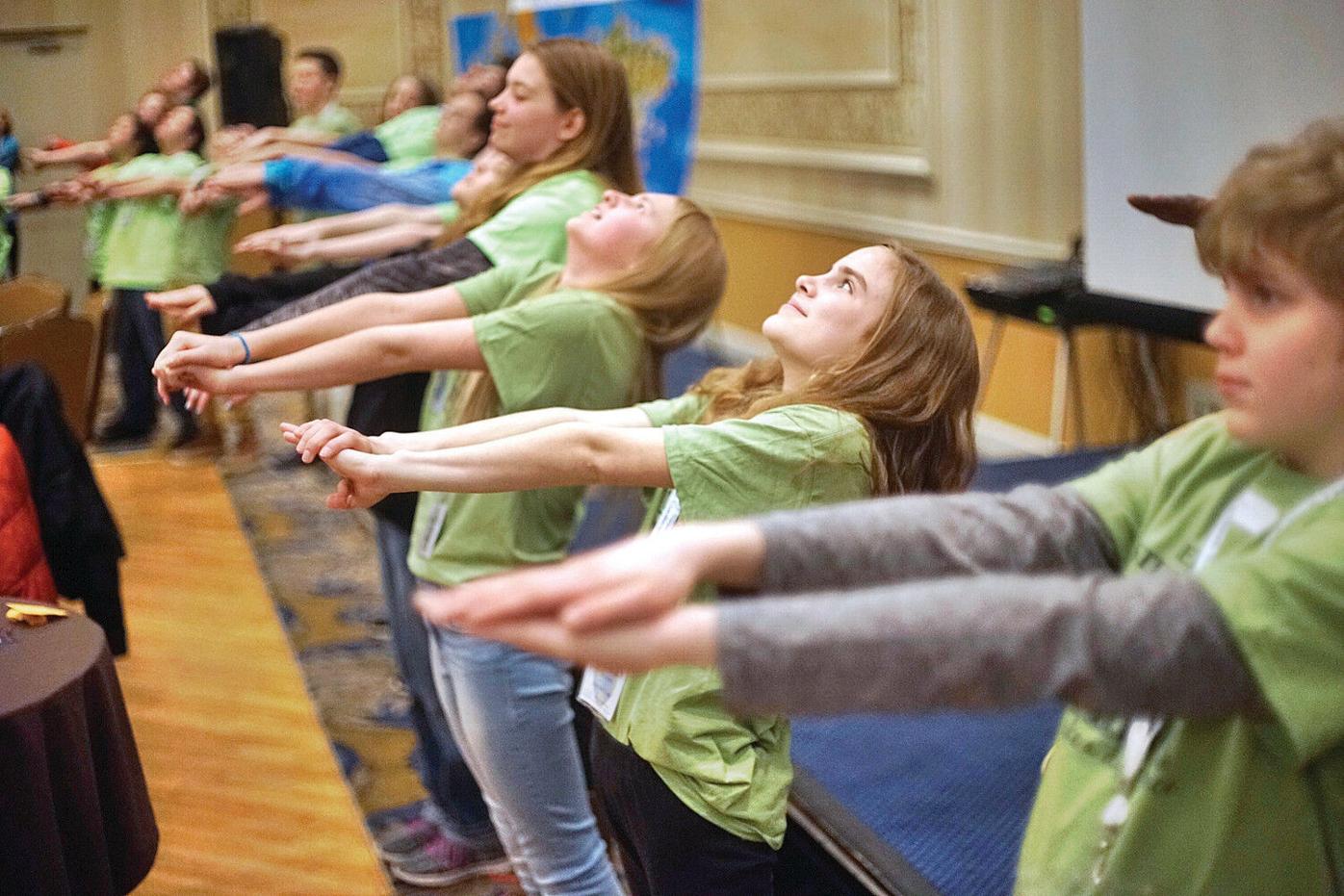 Along with Pamela Badila of Berkshire Pulse, students take time to move and dance Thursday, during the STRIVE Youth Leadership Conference at the Berkshire Plaza Hotel.

Kennedy Muway, rear, and Gigi Gardere of Bard College at Simon's Rock share a laugh Thursday, at a session titled "Art for Social Change" at Hancock Shaker Village in Pittsfield, during the annual 411 in the 413 Youth Conference.

Along with Pamela Badila of Berkshire Pulse, students take time to move and dance Thursday, during the STRIVE Youth Leadership Conference at the Berkshire Plaza Hotel.

And to speak up, be heard and make change.

And at Hancock Shaker Village, about 115 high school students chose among 20 workshops focused on the arts, compassion in action, wellness or "adulting" as part of the 411 in the 413 Youth Conference.

Together, they guided the group in a discussion that touched on the election of President Donald Trump, the importance of recognizing privilege and the impact of power structures in local schools.

Doren remembered a day when an African-American classmate was referred to as "brother" by their white male teacher during a discussion of slavery in America.

The teacher inappropriately used her classmate, she suggested, "as the identity that stood for all people of color, everywhere."

In Doren's group, the long discussion that ensued pointed to a need for young people to speak up to correct what they see as harmful power structures.

The 411 in the 413 Youth Conference provides one such space, Hampton-VanSant said.

"[It's] really actually going to help them in the long run," Hampton-VanSant said of the conference. "I will always be here to support."

At STRIVE, held at the Berkshire Plaza Hotel, the lineup embraced a simple maxim: if it isn't broken, don't fix it.

Ashley Barnes, a junior at Lee Middle and High School who serves on the advisory board, said organizers kept this year's programming largely the same as in 2017 because challenges facing students continue.

"Things like drunk driving, things like social media — these are problems that are present in everyday life," she said.

One repeat speaker was Robert Hackenson Jr., who spoke to 160 eighth-graders about social media safety — with a twist.

The audience gasped as Hackenson created an illusion that his head was shrinking and growing.

As it is for magicians, so it can be online.

He cautioned students to take a step back from technology and be aware of social media's capacity for accidental or deliberate harm.

If students receive a text that upsets them, they should put the phone down, walk away and only later seek answers.

He warned students about ways they could be victimized online, including if they send nude photographs of themselves in a practice known as "sexting."

"If you ever feel pressure to send something like this, run," he said. "They don't respect you."

In the room next door to Hackenson, students heard the story of Rebecca White, whose mother and best friend were killed in a 1999 car crash caused by a drunken driver.

Along with the story of the crash, White shared her keys for happiness with the group: forgiveness, avoiding stress, laughing more, making good choices and taking time for what matters.

Students last year liked hearing from White, so the advisory board decided to bring her back, Barnes said.

Patricia LeBoeuf can be reached at pleboeuf@berkshireeagle.com, at @BE_pleboeuf on Twitter and 413-496-6247.