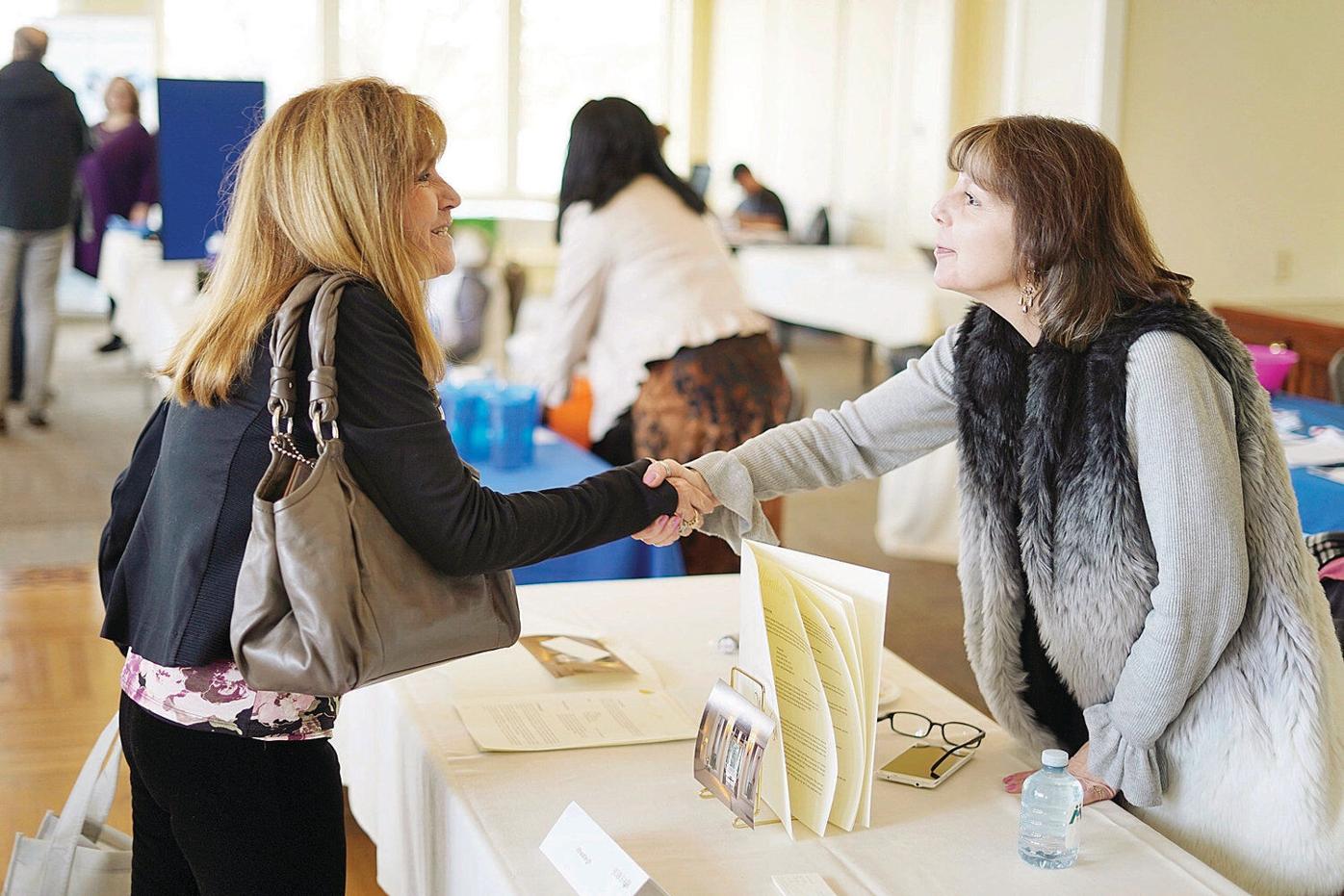 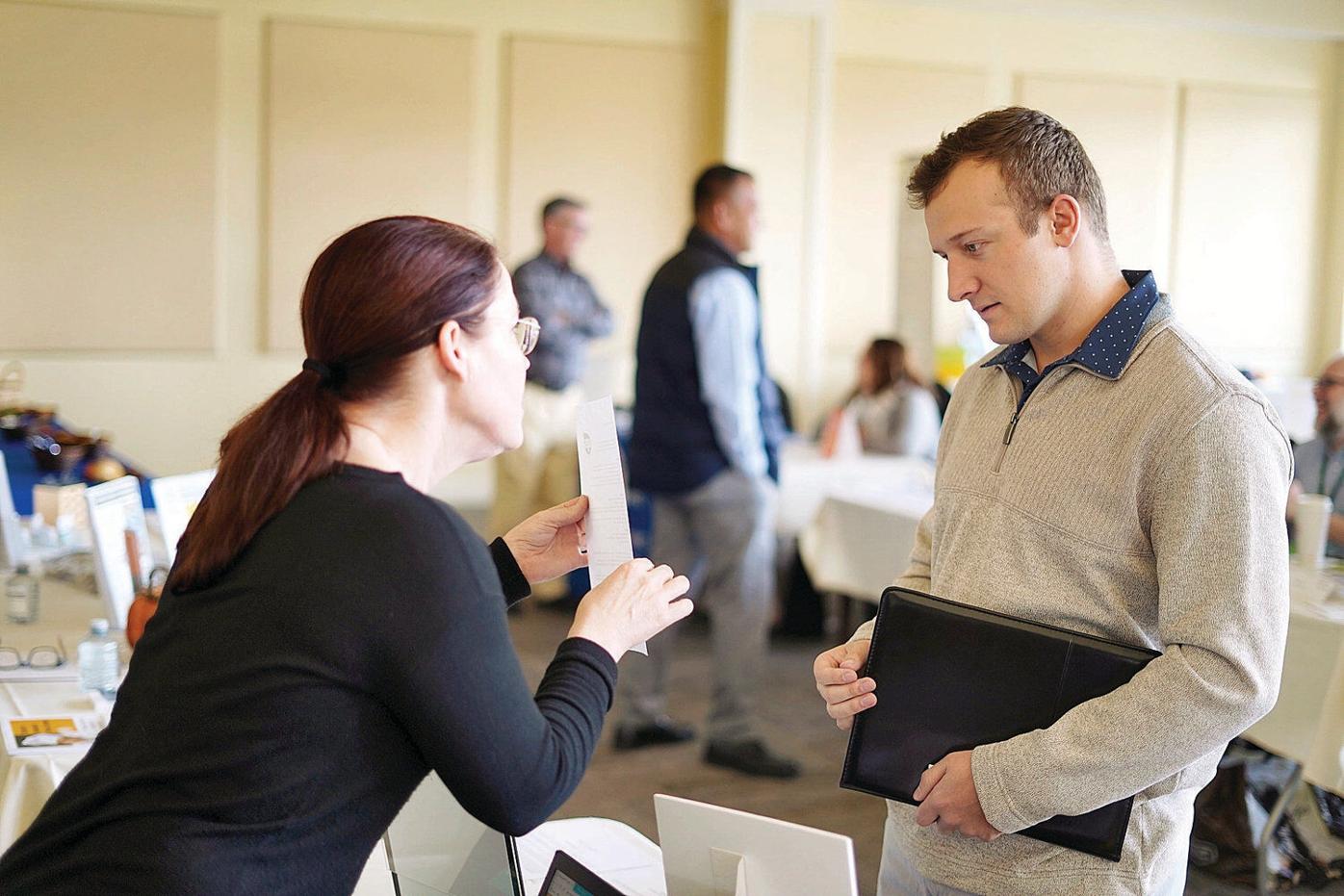 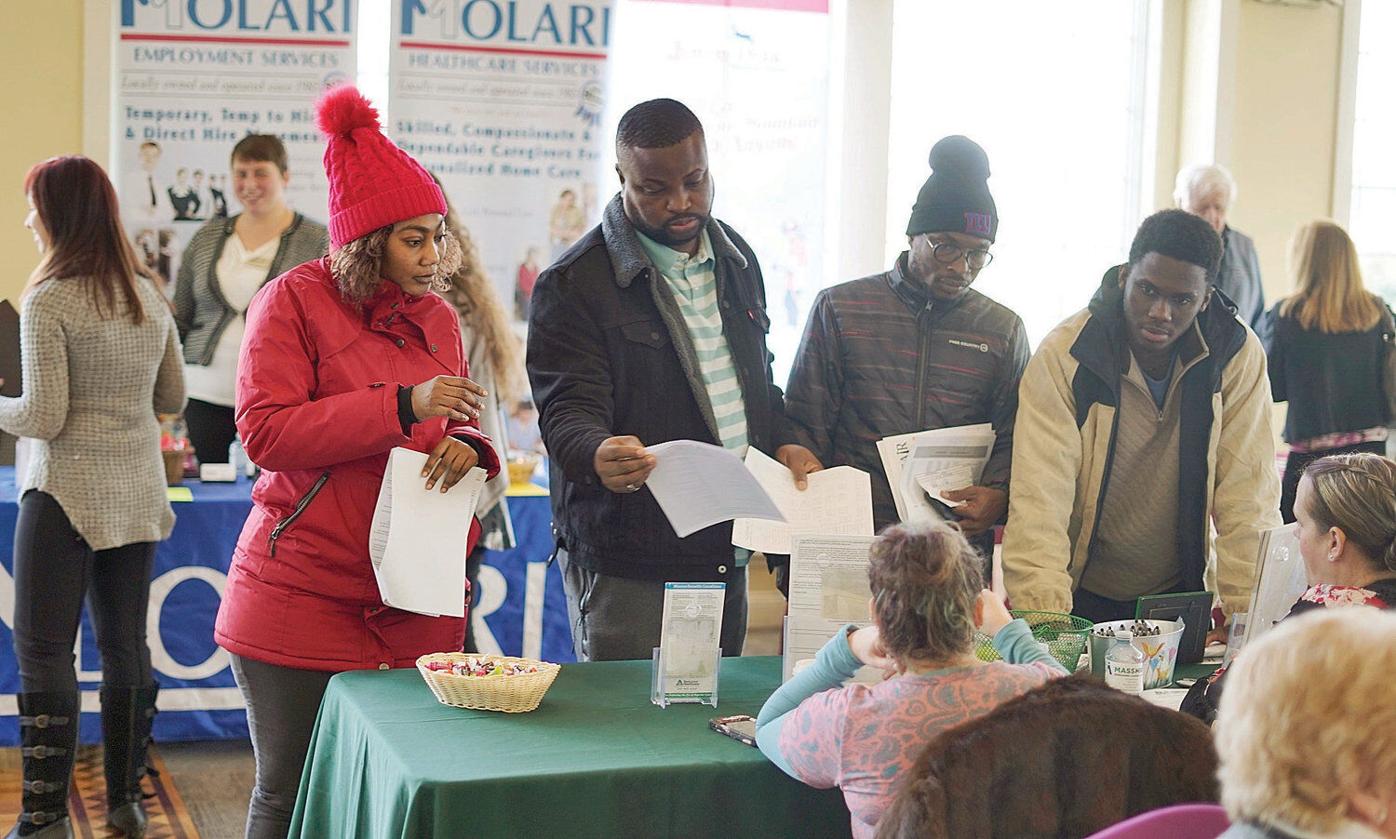 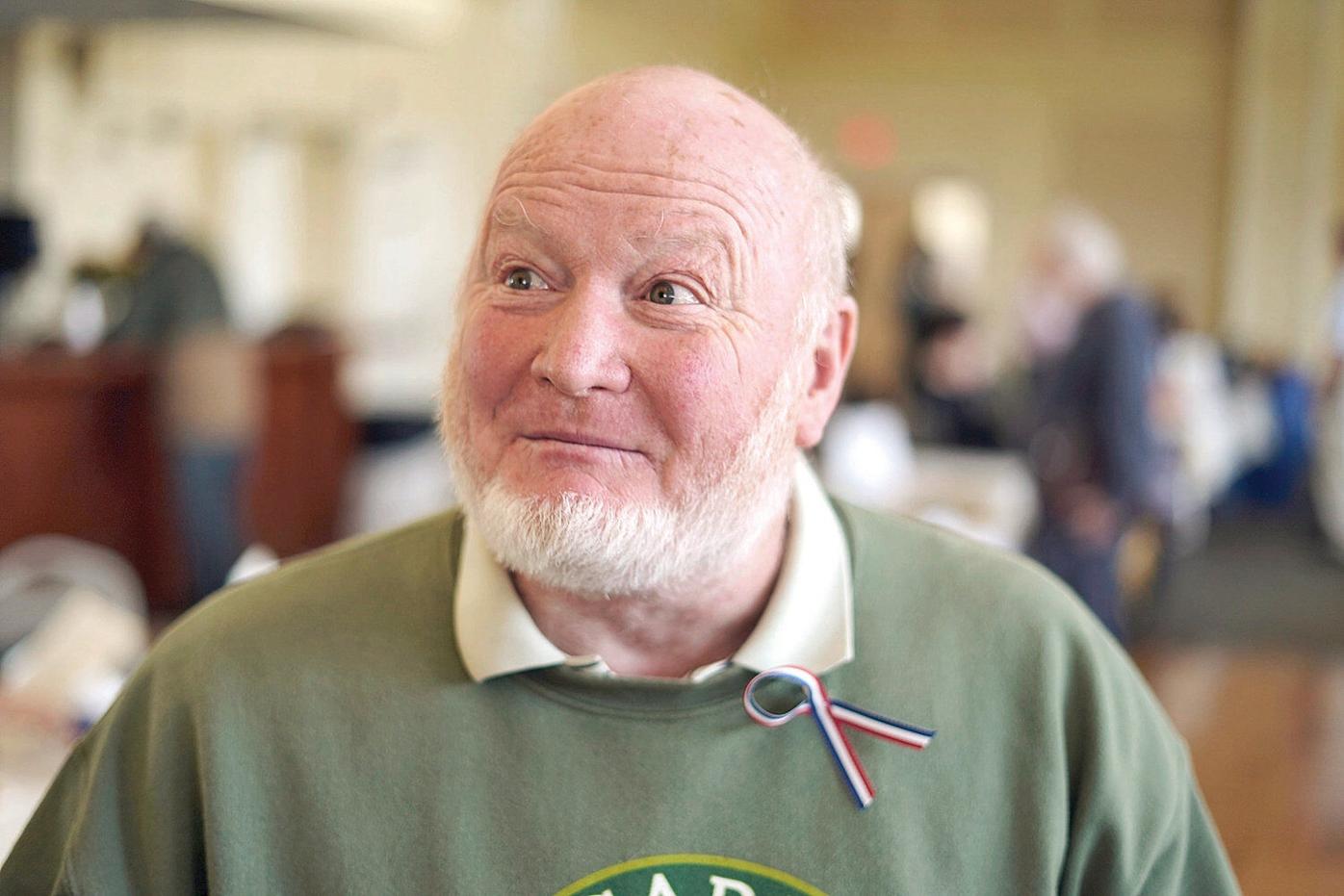 Air Force veteran Paul Dunlevy, 70, of Worthington, checks out the MassHire Berkshire Career Center's annual job fair on Wednesday at Berkshire Hills Country Club. Dunlevy has experience and a versatile skill set, but he doesn't have a job; he was laid off from his previous position three months ago. 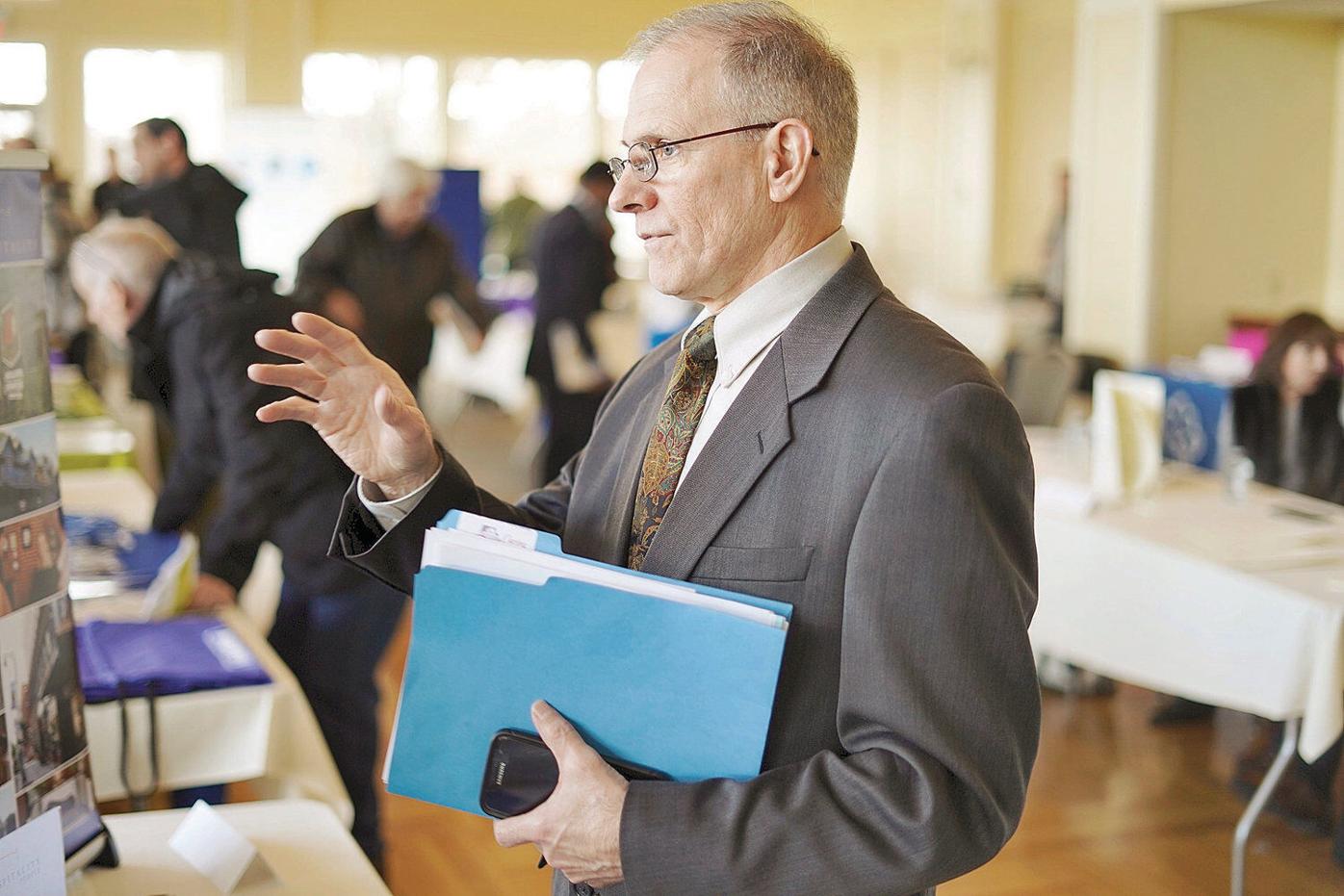 Air Force veteran Paul Dunlevy, 70, of Worthington, checks out the MassHire Berkshire Career Center's annual job fair on Wednesday at Berkshire Hills Country Club. Dunlevy has experience and a versatile skill set, but he doesn't have a job; he was laid off from his previous position three months ago.

PITTSFIELD — Paul Dunlevy served in the Air Force during the Vietnam War, and he has since held several jobs — including a six-year stint driving vehicles while working on the Alaska pipeline.

"Never had an accident," he said.

Dunlevy has experience and a versatile skill set — "I can do anything," he said — but he doesn't have a job; he was laid off from his previous position three months ago.

On Wednesday, Dunlevy was among a small group of military veterans who attended the second session of the two-day MassHire Berkshire Career Center's annual job fair, at Berkshire Hills Country Club, which featured 43 employers and 99 job seekers.

It was the first time in the event's 14-year history that MassHire, formerly the BerkshireWorks Career Center, held its annual job fair over two days. The first session took place Tuesday afternoon at Berkshire Hills, with 37 employers and 65 job seekers in attendance.

The first half-hour of Wednesday's three-hour session was reserved for veterans only.

"It's a good idea," said Dunlevy, 70, of Worthington, referring to the exclusive session. "Look at the number of people who are here especially for veterans. We get an opportunity to talk."

The new concept followed another new career center event — Berkshire County's first 50-and-older job fair, which took place in September in Pittsfield. These new events are being held based on feedback that the career center has received, said MassHire Berkshire Business Services representative Stephanie Caporale, who has arranged job fairs for the career center for the past three years.

Wednesday's job fair was the first time the career center had ever held a session strictly for veterans.

"It's veteran's month," Caporale said. "We did some special workshops [at the career center] to prepare them."

Caporale hoped that more veterans would attend the early session — there were 13 — but said "we've never really done that [veterans] before. That's why we did only half an hour.

"It's not disappointing," she added. "Unemployment's low. We're seeing less traffic in our office, too. And if a business walks away with one or two qualified candidates, that's a good day."

Air Force veteran Jim Czarnecki. who turns 61 next month, previously held a position for nine years in the fitness industry but said he was looking for something new. Czarnecki spent a long time talking to the recruiters from General Dynamics Mission Systems in Pittsfield, a federal defense contractor for whom veterans receive preference in hiring.

He viewed the veterans session as a "great opportunity to get in front of so many employers at the same time."

"There's a limit to emails and phone calls," said Keith Hannaleck, a recruiter for General Dynamics.

Judy Lampiasi, 60, of Pittsfield, who served in the Air Force Reserves, also was looking for a new start. After her family-owned business, Lampiasi's Bakery in Pittsfield, closed its doors after 32 years, Lampiasi worked at the spa desk at Cranwell Spa & Golf Resort for four years before she was laid off in October amid extensive off-season renovations.