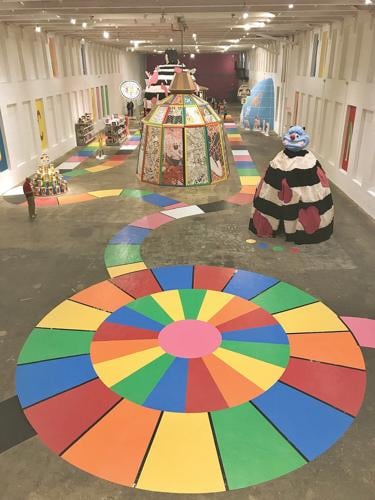 An overview of part of Trenton Doyle Hancock's "Mind of the Mound: Critical Mass," which recently opened at the Massachusetts Museum of Contemporary Art. 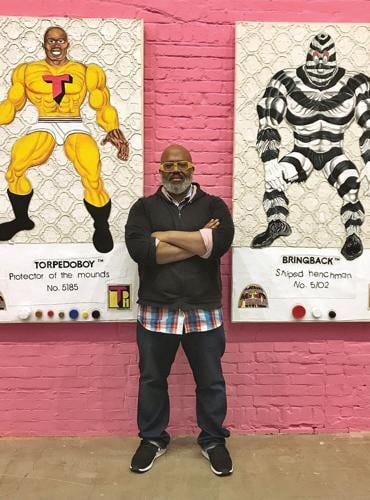 The artist, Trenton Doyle Hancock, stands between a painting of Torpedo Boy, the anti-hero he created at the age of 10, and a painting of a Bringback, another character of the Moundverse. 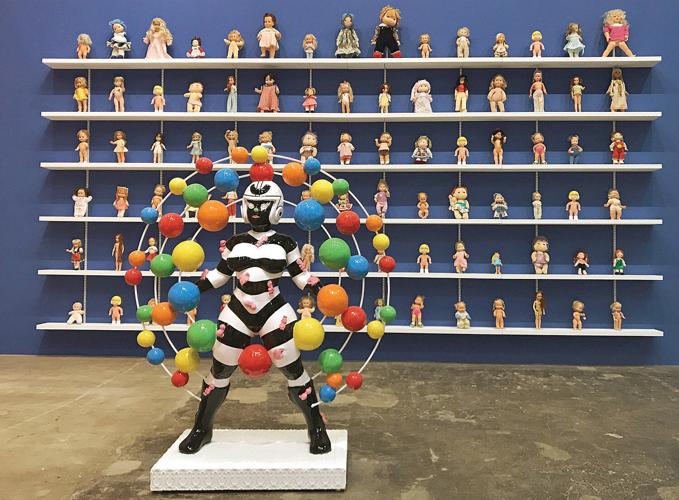 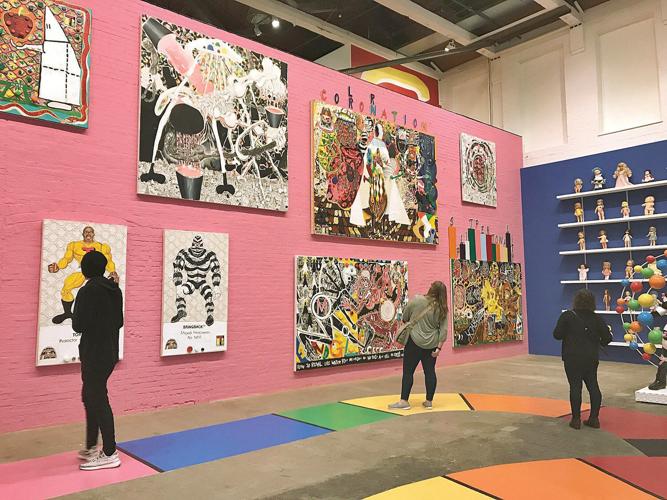 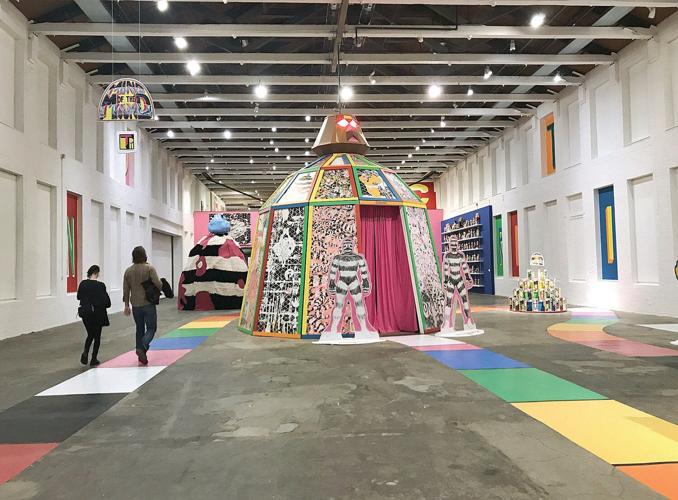 Junior Mound, covered in pieces of Hancock's paintings, is guarded by "Bringback Nos. 1 and 2." Inside, a video, "What the Bringback Brought," tells the story of how the artist was transformed into one of the striped creatures and became a toy maker.

An overview of part of Trenton Doyle Hancock's "Mind of the Mound: Critical Mass," which recently opened at the Massachusetts Museum of Contemporary Art.

The artist, Trenton Doyle Hancock, stands between a painting of Torpedo Boy, the anti-hero he created at the age of 10, and a painting of a Bringback, another character of the Moundverse.

Junior Mound, covered in pieces of Hancock's paintings, is guarded by "Bringback Nos. 1 and 2." Inside, a video, "What the Bringback Brought," tells the story of how the artist was transformed into one of the striped creatures and became a toy maker.

NORTH ADAMS — As Trenton Doyle Hancock rises from a metal table in the lobby of the Massachusetts Museum of Contemporary Art, a young fan from the next table over approaches with a glint of hope in her eyes.

"Your show was 'mound' blowing,'" she says. The girl, who looks to be about 10-years-old, beams from ear-to-ear as he stops briefly to chat and autograph a map/guide from his newly opened, "Mind of the Mound: Critical Mass."

It's high praise of sorts for the artist whose work celebrates the innocence of youth, mourns its loss and champions its reclamation amid swirls of black-and-white stripes and pops of bubble-gum pink in a graphic novel come-to-life.

"You don't have to grow up. You have to, but you don't have to lose sight. You can always reestablish a sense of youth and wonderment," Hancock said. "If you see the world through the eyes of a child, you see the truth. Children only see truth. They only speak truth. We're taught by the time we're teenagers and well into our 20s, to let go of the truth, of that wonderment, a kind of naivete. Some of those things you don't have a choice in the matter, it just happens. I find that, especially with artists, we're always fighting our way backwards to try to see the world that way again."

Inside Mass MoCA's Building 5 gallery, a Candy Land-esqe path of red, blue, yellow and green rectangles weaves its way in, out and around giant structures, called Mounds. Stops along the way include a Halloween House, the Mound Museum, Toy Aisle/Trenton's Toy Isle, Junior Mound and Undom Endgle. The walls are filled with paintings of this universe's characters, including Torpedo Boy, a superhero Hancock created at the age of 10, and larger-than-life pages from an in-progress graphic novel.

Here, Hancock welcomes the viewer into his Moundverse, a construct first developed in childhood to shield himself from external negativity, and later, a place for him to develop his own mythos. It's a place where the Mounds, a peaceful plant/human hybrids, are constantly threatened by the blood-thirsty, tofu-eating Vegans, a race of mutants. The Mounds are protected by Torpedo Boy, a sometimes successful hero.

Part fiction, part autobiographical, Hancock's Moundverse is the result of nearly three decades of artistic endeavor. In 2014, he presented the first of several comprehensive shows welcoming the public into this universe, "Trenton Doyle Hancock: Skin and Bones, 20 years of Drawing," at the Contemporary Arts Museum Houston.

"This is the other half of things. This is everything that didn't fit into that conversation," Hancock said. "'Skin and Bones' was a drawing survey, so that show was pretty much how I use drawing to plan things or to notate. Drawings, of course, can be finished, larger things, as well, like more architectural in a sense.

"This show is really jumping off from that in showing here's how you start: how you dress that skeleton, how do you dress those bones, how do you further that idea of skin and musculature and meaning well past what that initial skeleton thing is."

The first two stops along the colorful path of the Moundverse bring the viewer to Halloween House, a recreation of his grandmother's house, and the Mound Museum. At the Halloween House, one side features trick-or-treaters, dressed as Hancock's characters, running down a path away from a door with a demon-expelling cross jutting out of it. The other side features a replica of his grandmother's living room, where a television plays a loop of an evangelical television show postulating the evils of children's cartoons, and specifically, that of the 1980s cartoon, "He-Man and the Masters of the Universe." It was here, he said, that the first flickers of the Moundverse were sparked.

Nearby, the Mound Museum, houses of shrine of toys, books and videos, most of which Hancock was not allowed to have. In its center, a complete set of He-Man action figures, holds court.

"There is something about the way this mound was put together, that is more about that these are the things that on my own I came to a conclusion these items are the talismanic objects or mathematical rhythms that made me feel safe; that made me feel like me," he said. "You can see traces of all of these action figures or books or films in the rest of the work. In some way, this is a distillation. You are coming here to see the resource from which all the other work grew. These are all of the things that were protected and weren't burned. That fire could only go so far."

Both spaces represent an "idea of home" to the artist.

"They both have these dualities to them," Hancock said, while standing in the middle of the Mound Museum. "When I see that floor tile in the other building, that was my grandmother's floor, I feel very safe. But then some of the programming, the rhetoric that was floating around the house, didn't make me feel safe. It threatened my natural sensibilities."

From there, the path takes the viewer on a trip through Hancock's creative brain, as he develops this world's mythology and works out the complex issues we all face on a daily basis.

Tapping into the collective consciousness is something Hancock aims to do throughout the show with the aid of pop culture items: toys, comics, movies and board games.

"I'm catching that sweet spot on either side of my childhood, dipping into the 1960s a little bit and up into the 1990s," he said. "So many people have come up to me and said, 'You've somehow tapped into my brain or how my memory works or how I organize information, but I've never seen that externalized.' So this kind of gives people an opportunity to literally come in and find their voice, which I've been super excited about."