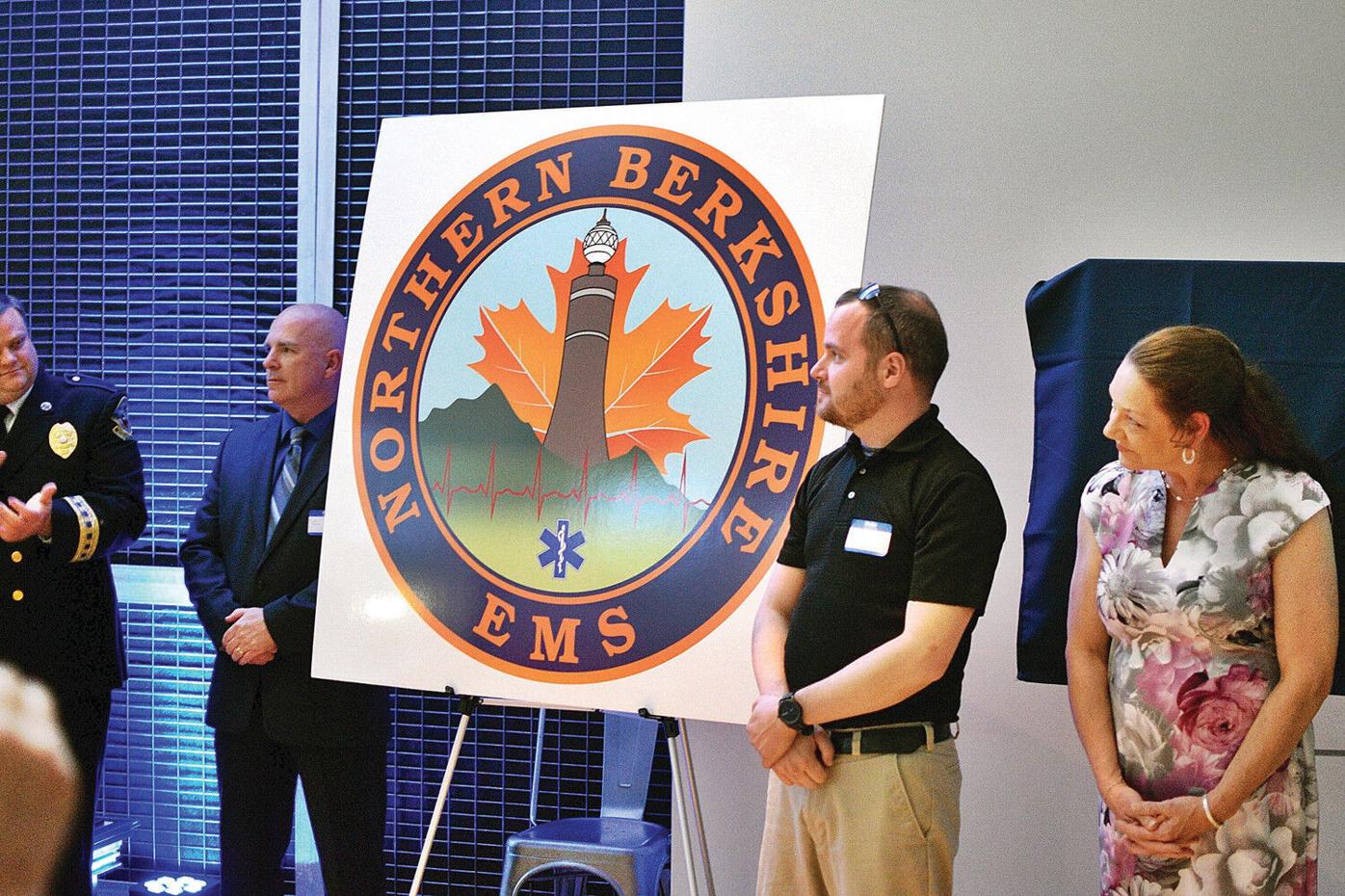 Members of an employee rebranding team unveil the new logo for Northern Berkshire EMS, a result of the merger earlier this year between Village Ambulance Service in Williamstown and North Adams Ambulance Service. 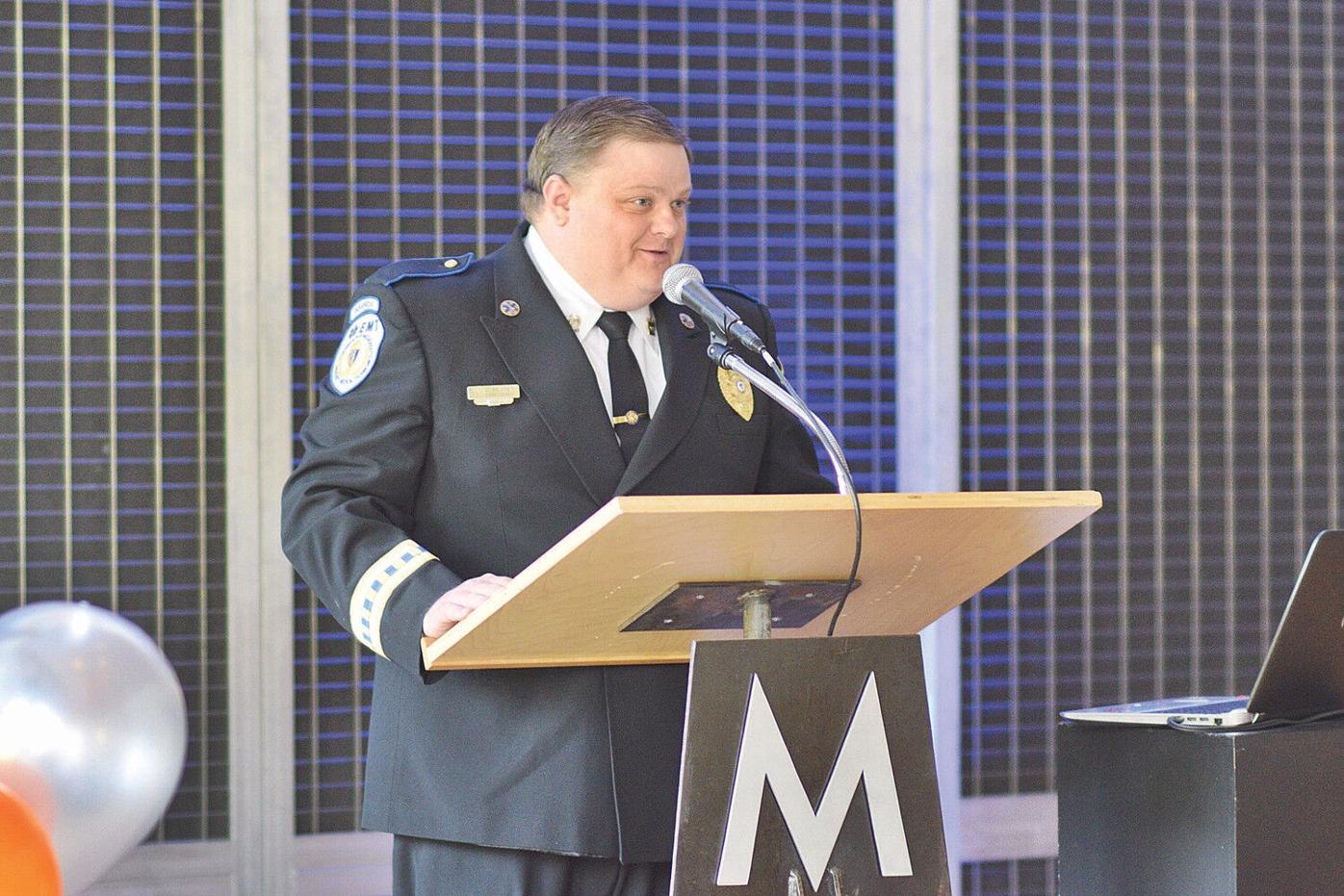 Members of an employee rebranding team unveil the new logo for Northern Berkshire EMS, a result of the merger earlier this year between Village Ambulance Service in Williamstown and North Adams Ambulance Service.

NORTH ADAMS — North Adams and Village ambulance services merged in January, but were patient in deciding on a new name for their joint future.

The new name and logo were unveiled at a decked-out celebration at the Massachusetts Museum of Contemporary Art, drawing leaders from throughout the Northern Berkshires to celebrate the consolidation — and planned strengthening — of local emergency medical services.

The event also marked the 40th anniversary of North Adams Ambulance Service and coincided with National EMS Week, the theme of which happens to be "stronger together."

"When we were at the table looking at the rebrand options and what we were going to do, I kind of looked at [Assistant Chief Amalio Jusino] — you're going to take this and you're going to run with it, right?" Meaney joked.

Jusino led the rebranding effort with a goal of boosting employee morale and creating a "sustainable, but powerful, positive and all-encompassing image" and welcoming any employee at the new ambulance service who wanted to provide input.

"This rebranding team was committed to showing the effective benefit of this merger," Jusino said.

The team created a new name, patch, logo and uniform.

The new logo features a depiction of a maple leaf and the tower atop Mount Greylock.

The merger of the North Adams Ambulance and Village Ambulance services was first announced in September 2017, after about a year of planning that involved officials from Williams College, Williamstown, and fire and ambulance companies.

"It's almost like getting married — like we got together, started dating, and this just got better and better and better. There were no agendas. There were never words of anger or a power struggle," said Robert Moulton Jr., who worked for North Adams Ambulance service for about 10 years and now serves as the president of its board of directors.

It maintains its headquarters on Harris Street in North Adams and still uses the Village Ambulance space on Water Street in Williamstown.

"Our employees are the backbone of what has made the past 40 years successful, and for that we are truly thankful," Meaney said.

The evening included several reflections on the history of the two organizations. Village Ambulance formed in 1983 and North Adams Ambulance started in 1978, both filling the needs of the community in a health care landscape entirely foreign to today's.

"There were no mentors," said Bruce Shepley, who was one of the 10 original squad members in 1978. "We did not go to the generation before us and say `What do we do in this situation' ... we turned to each other."

North Adams Mayor Thomas Bernard said he is "excited for what comes next."

Williams College and Williamstown have each pledged funds to ensure the merger is successful, Dr. Erwin Stuebner, vice president of the ambulance service, added. Without the financial assistance, North Adams would not have been able to take on Village's debt.

Williamstown has pledged up to $200,000 — though Stuebner noted he hopes not to have to use it.

Erwin Stuebner, who transitioned from president of Village Ambulance Service to vice president of North Adams Ambulance upon the merger, reflected on the conditions that forced Village to explore a merger.

"The change in health care reimbursements made it extremely difficult for small ambulance services to survive," Stuebner said. "A number of them, across the country, have gone out of business."

The evening featured a healthy dose of accolades to the ambulance service by local officials.

Alcombright also lauded North Adams Ambulance for becoming a leader in the fight against heroin addiction in the Northern Berkshires, working to train police officers and firefighters to administer naloxone to overdose victims.

"The contributions that the ambulance service has made to our greater community and those it serves is, in a word, immeasurable," he said.