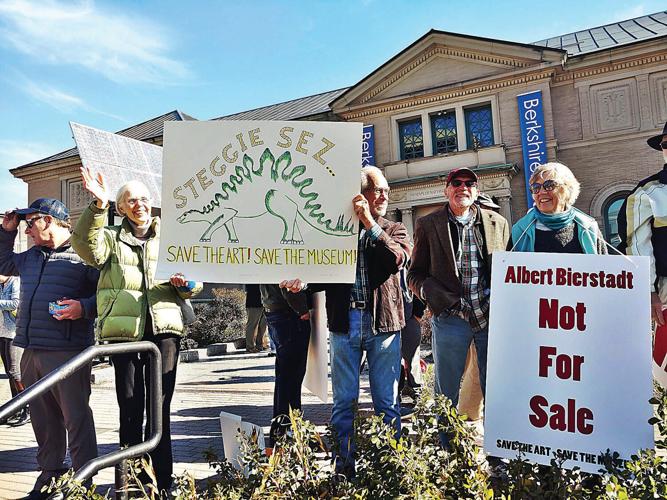 More than 50 people gather outside the Berkshire Museum on Saturday to protest the museum's planned sale of two Norman Rockwell paintings, among other works of art. 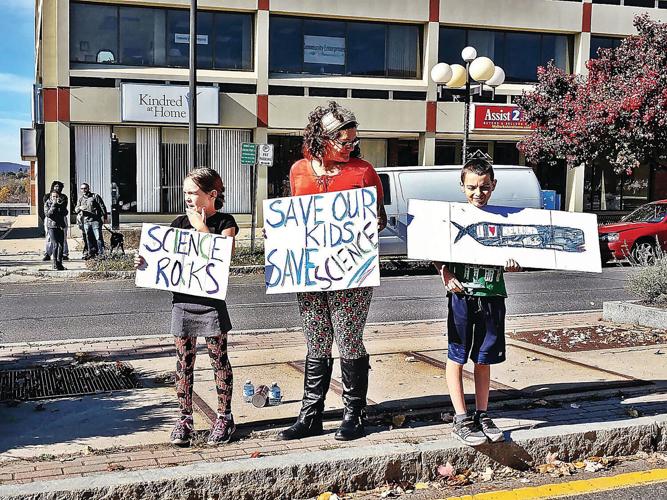 Kate Lauzon and her children, Jetta Berthiaume, 8, left, and Zachery Berthiaume, 9, were among supporters outside the Berkshire Museum in Pittsfield on Saturday in favor of the museum's decision to sell 40 pieces of art to fund its $60 million reinvention plan

More than 50 people gather outside the Berkshire Museum on Saturday to protest the museum's planned sale of two Norman Rockwell paintings, among other works of art.

Kate Lauzon and her children, Jetta Berthiaume, 8, left, and Zachery Berthiaume, 9, were among supporters outside the Berkshire Museum in Pittsfield on Saturday in favor of the museum's decision to sell 40 pieces of art to fund its $60 million reinvention plan

PITTSFIELD — Kate Lauzon and her two young children stood on the South Street divider on Saturday afternoon, facing off with more than 50 community members who gathered in front of the Berkshire Museum to protest its plans to sell 40 pieces of art to fund its $60 million reinvention plan.

Lauzon, who was one of the few counterprotesters who attended the fourth "Save the Art" protest at the Berkshire Museum, carried a sign that read "SAVE OUR KIDS, SAVE SCIENCE."

Pointing across the street to the crowd of protesters, Lauzon, 40, of Pittsfield addressed an apparent generational divide between those who are angered with the redesign and people like her, who want to see the museum go in a more interactive direction. She brings her two children — Jetta, 8, and Zachery, 9 — to the museum whenever she can, and prefers the art exhibits that integrate science and technology, she said.

"I'd like to see more of that. I don't want to have to go to Boston or Albany to get it. I want to walk," Lauzon said of a museum that puts an emphasis on science as well as art. "Do you see these people? The [protesters] are mostly 50 and over. They're not concerned about our children."

This summer, the museum announced a plan to sell 40 pieces of art, including two paintings by famed American artist Norman Rockwell, to create long-term financial stability and add a heightened emphasis to science and history.

Rae Langsdale, a protester who once worked as an administrative assistant at the museum, said that the museum's new vision focuses heavily on children and education but ignores that art is important for children.

"When I was a little girl, I would stand there and look at the Bouguereau painting," Langsdale said while holding a sign with a small image of William-Adolphe Bouguereau's "La bourrique" (The Pony-back Ride)"

The sale of 19 works of art is set to begin Nov. 13 at Sotheby's in New York City, the first of four auctions that week of pieces once housed at the 39 South St. museum in Pittsfield.

Twenty-one other works initially identified for auction no longer have sale dates, museum officials say, as Sotheby's reconsiders the order in which it will bring the pieces to market. The museum faces two legal battles over the sale plans, one suit filed by Lenox residents James and Kristin Hatt and Elizabeth Weinberg, and another by relatives of Rockwell.

Leslie Ferrin, a member of the Save the Art-Save the Museum group, said Saturday that not everyone at the protest is against the museum's "new vision," but they oppose the sale of art, specifically the two Rockwell paintings that he donated to the museum.

"We hope that it will pause," Ferrin said of the sale. "We hope that on Wednesday, at the first hearing, there will be an injunction."

Phillip Deely of Stockbridge said he understood that the museum needed a boost in memberships but said trustees are going about it the wrong way.

"I think that to decide the museum needs a one-time shot of $40 [million] to 60 million is grandiose," said Deely, who worked for 10 years as the assistant director of external relations at the Norman Rockwell Museum. While fundraising wouldn't bring in that much money, it would help the museum get back on its feet, he said.

"I intend to continue to advocate for sensitive treatment of the building," Deely said.

Throughout the two-hour protest, few patrons came and went from the museum, but two children's birthday parties were held there back to back. Parents declined to comment.

In the last fiscal year, there were 29,000 student "experiences" from children in local schools, according the museum's spokeswoman, Carol Bosco Baumann.

Most people who visit the museum spend an average of an hour in the current "Curiosity Incubator," a small part of the museum that features interactive exhibits, including Pahat, the museum's iconic ancient Egyptian mummy, and the use of virtual reality goggles to experience mealtime in different cultures.

While the museum is aimed at serving people of all generations, the most frequent visitors tend to be "young, local families," Bosco Baumann said.

McGraw said that it "saddens" her that there are people who are upset with the museum, but that she is excited about a "kind of cutting-edge" plan to make the museum more interactive and educational.

Besides moving the aquarium to the first floor, there will be more of an emphasis on exhibits that allow visitors to interact with them.

Rebecca Thompson of Pittsfield showed up Saturday to show her support for the redesign, unaware that she would be standing beside a crowd of protesters.

Speaking with anger in her voice, Thompson said that if the redesign somehow "destroys" the museum, The Berkshire Eagle's reporting will be to blame. Media coverage has been "unfair to the museum," Thompson said.

"I think the museum trustees are incredibly courageous to take this on."

Thompson, who moved to the Berkshires about three years ago, said she is looking forward to the redesign making the Berkshire Museum distinctive from others in the area.

As for selling two famed Rockwell paintings to achieve its goal, Bosco Baumann said: "We're so delighted that there's a museum right down the road that has hundreds of Rockwells, and they do a great job at interpreting them."