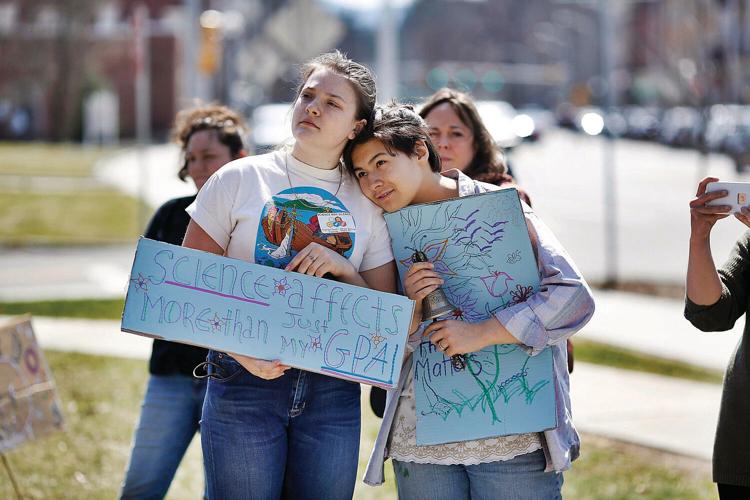 Louisa Kimball, 16, left, and Alice Tibbetts, 15, listen to speeches at the steps of the Mason Library in Great Barrington on Saturday, during the second River Walk March for Science. 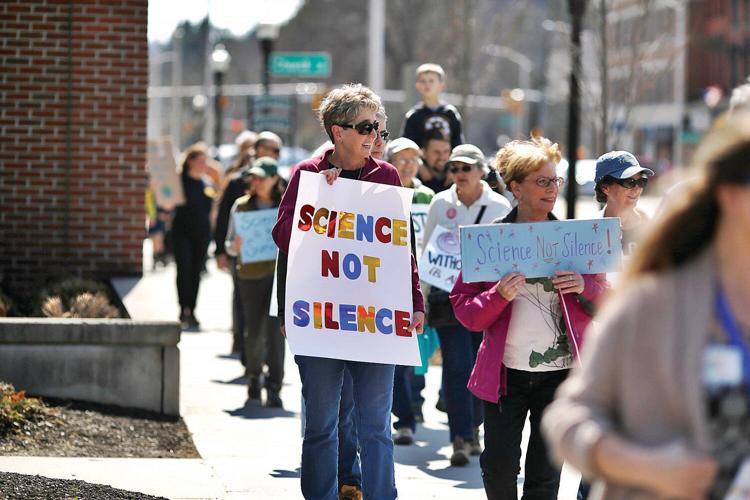 Around 50 community members walk along Main Street in Great Barrington on Saturday for the second River Walk March for Science.

Louisa Kimball, 16, left, and Alice Tibbetts, 15, listen to speeches at the steps of the Mason Library in Great Barrington on Saturday, during the second River Walk March for Science.

Around 50 community members walk along Main Street in Great Barrington on Saturday for the second River Walk March for Science.

GREAT BARRINGTON— Growing up in Vietnam, many people tried to discourage Kieu Anh Le from pursuing science. Even her mother said that "science is for boys and the humanities are for girls," Le said.

On Saturday afternoon, the 17-year-old junior at Miss Hall's School in Pittsfield addressed a crowd of more than 50 women, men and children gathered in front of Mason Library during the River Walk March for Science, confirming that naysayers can't quash her passion.

"Science is love. Science is passion. Science is an adventure," Le, who goes by Anna, said Saturday. "If you're here today, you know that global warming is not a hoax; it's a fact."

The event, organized by the Great Barrington Land Conservancy, was the second River Walk March for Science.

Angered with the loosening of environmental regulations under a new presidential administration, and threats of funding cuts to science and environmental causes, environmentalists hit the River Walk — not only to carry signs and voice their concerns, but also to educate visitors.

More than 200 satellite marches were scheduled to coincide with the larger march in Washington on Saturday.

Le, who has participated in international and national science fairs and is working on a project to improve pesticides, is hoping to get involved in the Berkshire Environmental Action Team next year and enter the Google Science Fair.

"I want to follow my passion for environmental science," she said.

Before the march, representatives of several environmental groups gathered along the River Walk to share information about volunteer opportunities and to educate the public.

Becky Cushing, director of Berkshire Wildlife Sanctuaries at the Massachusetts Audubon Society, said that besides encouraging individuals to learn about nature, the organization has "elevated climate change as a priority."

"When (federal) grant funding becomes less, it definitely impacts us," Cushing said. "The government needs to be behind science."

Using spray bottles and a model neighborhood, Libby and Will Gop, ages 8 and 6, respectively, learned about water pollution caused by stormwater runoff.

Alison Dixon of the Housatonic Valley Association offered up solutions to help mitigate pollution, including washing cars on lawns, instead of pavements, fixing motor oil leaks, and not using fertilizer before it rains.

Bill Gop, Libby and Will's father, said he brought his children to the march as a way to raise their awareness about science.

"They're very outdoorsy," he said "Just last night, we went out looking for frogs."

Christine Robb of Watertown, Conn., is a chemist who thinks the biggest threat to science is the ongoing cutting of funding to national programs.

She and her husband, who also is a scientist, brought their 6-year-old daughter, Susie, to the event.

Surrounded by signs reading "Science not silence," and "STEMinist," the family lay on the lawnoutside the library and listened to members of Berkshire organizations talk about their work in the county.

Cushing told the crowd that the Mass Audubon Society was founded in the 1800s by women who wanted to stop the slaughter of birds for the fashion industry.

"Those women were fighting against the odds," she said. "They didn't even have the right to vote."

Despite being up against power, wealth and a global organization, the women succeeded, Cushing said.

"I think there are a lot of parallels to what we are trying to do right now," Cushing told the crowd.