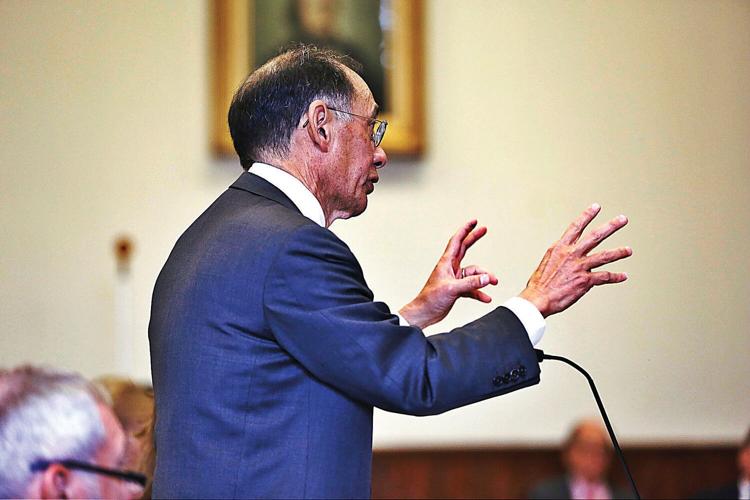 William Lee, the attorney for the trustees of the Berkshire Museum, argues in front of Judge John Agostini during Wednesday's hearing on the museum's proposed art sale. 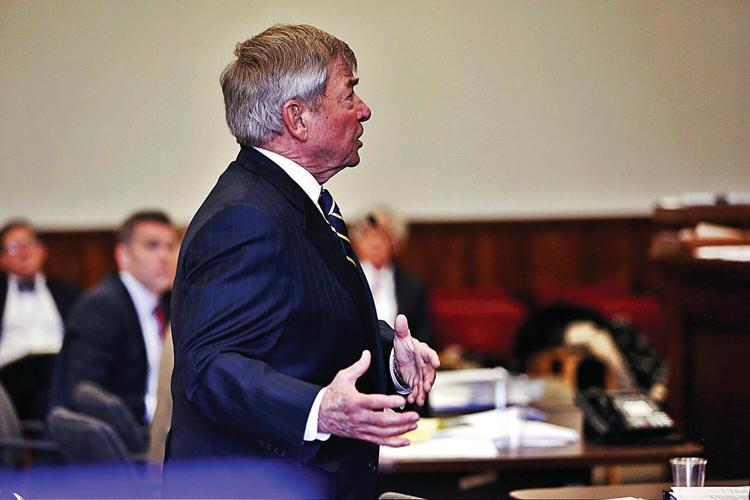 William Lee, the attorney for the trustees of the Berkshire Museum, argues in front of Judge John Agostini during Wednesday's hearing on the museum's proposed art sale.

PITTSFIELD — The Attorney General's Office filed an emergency motion late Wednesday to bolster — or perhaps salvage — its effort to halt art sales by the Berkshire Museum.

The office acted after participating in a two-hour hearing before Judge John Agostini that appeared to leave that quest on life support, as plaintiffs' attorneys struggled to convince the judge their clients held necessary legal standing to challenge the museum's planned sale.

In the emergency motion, the Attorney General's Office asks Berkshire Superior Court to allow it to become a plaintiff if those already suing to halt auctions fail to meet the standard.

Lawyers with the office had reason to consider that a real possibility after Agostini spent half of Wednesday's hearing grilling attorneys on the question of standing.

At issue is their request that the court grant a preliminary injunction stopping the planned sale of 40 works from the Pittsfield museum's collection. Plaintiffs in two separate actions include three sons of artist Norman Rockwell; Tom Patti, an artist who has sold works to the museum; and seven residents of Berkshire County. The suits have been consolidated.

Agostini said he would rule promptly.

"I will get you a decision as soon as I possibly can," the judge said a little after 1 p.m. Wednesday before the emergency motion was filed.

Earlier, Agostini had noted the size of the audience in the courtroom, quipping that it normally takes a murder case to equal the turnout.

"This is a very important case," the judge said.

The hearing drew dozens, including members of a local activist group Save The Art - Save the Museum, as well as supporters of the museum's plan.

While plaintiffs' attorneys occupied two tables in the courtroom, another held a three-member team defending the museum. At a fourth sat three assistant attorneys general, all of whom submitted a brief Monday supporting calls that sales by Sotheby's — scheduled to begin Nov. 13 — be halted.

From the start of Wednesday's hearing, Agostini signaled he didn't buy the idea that simply being a museum member or living in Berkshire County entitled people to bring suit.

Allowing that, he said, would send "shock waves" through the museum community in Massachusetts.

Agostini asked lawyers to provide case citations that might convince him to accept that the Rockwells or other plaintiffs have the right to challenge actions taken by the museum's trustees.

Attorney Michael Keating, representing the Rockwells and others, argued that the wording of a 1932 act of the Legislature — and an earlier one in 1871 — entitled residents of the county to have access to museum holdings.

"We believe that statute benefits the residents of Berkshire County," Keating said. He later conceded, "This is an aggressive position on standing."

Attorney William F. Lee, representing the museum, picked up on Keating's use of "aggressive" and seemed to present it to the judge as an example of overreach.

Lee argued that only the office of the attorney general holds standing to second-guess actions by a charitable corporation like the museum, saying that office had "exclusive" jurisdiction.

He doubled back to that point later, questioning why the office hadn't filed a motion on its own seeking to stop the sale.

"They still have not brought that motion," Lee said.

Hours later, the office did.

During Wednesday's hearing, Courtney Aladro, an assistant attorney general, was pressed by Agostini on the question of whether members of the museum have standing.

Aladro conceded the point, saying they were intruding on the "exclusive realm" of her office to oversee public charities under state law.

That prompted Keating to work to rebuild grounds for his clients to sue, saying that the Supreme Judicial Court has not given the attorney general exclusive domain in such cases. But Lee, for the museum, quickly offered Agostini a citation indicating the high court had found that the Attorney General's Office is the exclusive arbiter of public charities issues.

Agostini also heard from attorney Nicholas O'Donnell, representing three residents of Lenox. O'Donnell argued that using proceeds from the sale of art violates museum policies nationally, prompting the judge to note that those are ethical standards, not legal ones.

Rather than seek another hearing, the attorney general's office asks that the court view the brief it filed Monday as "sufficient to serve as a request for the same injunctive relief ... ."

"The evidence in the record shows that the sale of the forty works of art would likely violate statutes intended to protect the public interest," the motion says.

If Agostini determines that current plaintiffs lack the right to bring suit, the dispute narrows to claims put forth by the attorney general and responses from the museum.

On that, Wednesday's hearing produced clear differences of opinion.

The Attorney General's Office maintains that the museum cannot sell works of art it acquired before 1932, the year it was separated from its former parent organization, the Berkshire Athenaeum.

Aladro told Agostini that when the Legislature separated the museum from the library in 1932, that act did not alter an earlier restriction that works given to the Athenaeum remain in Pittsfield.

Only a court, Aladro said, can lift a restriction on a charity's use of its assets.

When pressed by the judge, Aladro said she believes the restriction follows the assets themselves. Agostini indicated that he thinks the restriction applies only to the museum in this case.

Lee countered that he takes a "diametrically opposed view" — that the museum is under no restriction, since no one has produced written proof. Thank-you notes mentioning "permanent collection" don't count, he said, because museums over time do alter the elements of their collections.

On the issue of performing their duty as trustees, Lee said the museum's leaders faced a financial crisis and acted to ensure the institution's future.

"The only thing people are doing now is Monday morning quarterbacking," Lee said of the challenge. "And the system doesn't allow that."

Opponents argue the sale would rob the community of an important part of its history.

Aladro, the assistant attorney general, told the court her office is acting to enforce restrictions on sale of the artworks.

The museum, she said, should have informed the office in a June letter that it wanted to sell works under restriction.

The museum relented, Aladro said, when her office advised it that the 1932 act barred the sale of works acquired before that date. Those works were pulled from the auction list at Sotheby's — at least for now.

Further, she argued that the sale changes the institution's mission, a step that triggers the need for notice and approval by her office.

"This sale will result in the abandonment of their fine arts purposes," she said of the museum.

Lee countered that the 1932 act lays out expectations that the museum will fulfill through the implementation of its "New Vision," the project that uses proceeds from the sale of art to renovate its facility and protect it financially through a roughly $40 million endowment.

He refuted assertions by Keating that trustees acted in secret and noted that the Attorney General's Office had not found the board to have acted in bad faith.

"This is a hard decision," Lee said of the sales, "and no one is suggesting otherwise."

Citing a roughly million-dollar yearly deficit, officials said the museum risks closing within eight years unless they act to stabilize its funding.

While the attorney general's office has not painted trustees as having acted in bad faith, Aladro maintained they have not been reasonable.

She spoke after Agostini posed a question he said got to "the heart of the matter."

"What did the trustees do wrong," the judge asked.

But she disputed that the financial situation the museum faces is as dire as it says. Trustees acted unreasonably, she said, by treating the art collection as "fungible."

The term refers to a commodity that can be traded for something else, such as cash.

Instead, Aladro said, the board turned away from its "core legacy" as a museum and took steps that will sever its connection to cultural institutions it needs to hold future exhibitions.

"You ask what the museum did wrong," Keating said to the judge. "They violated their own written policies."

Briefs filed in the case show that trustees voted to sign a contract with Sotheby's weeks before removing provisions from policies that prohibited selling art in the way it intends.

Keating also accused trustees of secrecy. "They knew there would be pushback. They didn't want to face this."

He pointed to an email sent last May by the trustees president, Elizabeth McGraw, that asked fellow trustees to keep quiet. The subject line of the email read, "Loose lips sink ships."