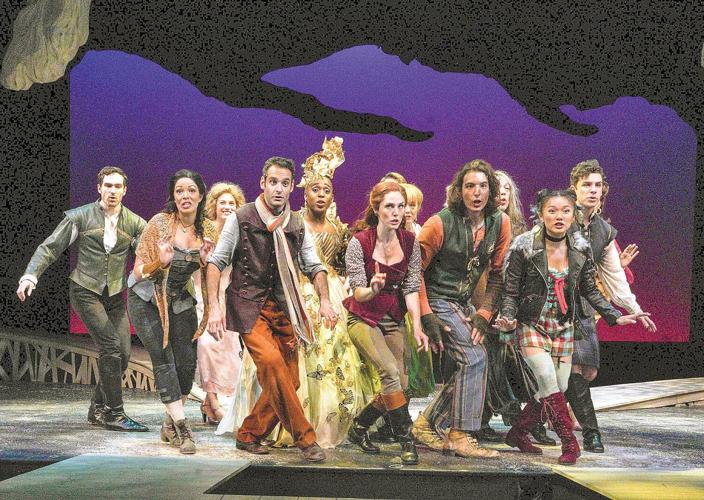 Barrington Stage Company is opening the mainstage portion of its 25th anniversary season with the 1987 Stephen Sondheim-James Lapine musical;, "Into the Woods." 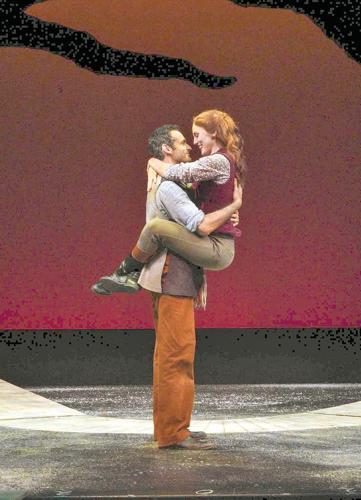 Jonathan Raviv as The Baker and Mara Davi as The Baker's Wife in Barrington Stage Company's production iof Steohen Sondheim and James Lapine's "Into the Woods," through July 13 on the Boyd-Quinson Mainstage.

Barrington Stage Company is opening the mainstage portion of its 25th anniversary season with the 1987 Stephen Sondheim-James Lapine musical;, "Into the Woods."

Jonathan Raviv as The Baker and Mara Davi as The Baker's Wife in Barrington Stage Company's production iof Steohen Sondheim and James Lapine's "Into the Woods," through July 13 on the Boyd-Quinson Mainstage.

PITTSFIELD — Joe Calarco has done it again. The director who gave us two of Barrington Stage Company's more memorable productions in recent years — "Ragtime" in 2017 and "Breaking the Code" in 2014 — is here this year with a breathtaking production of Stephen Sondheim and James Lapine's 1987 musical "Into the Woods."

The show opened over the weekend at BSC's Boyd-Quinson Mainstage, where it is scheduled to run through July 13.

I don't think you could ask for a more satisfying, fully rewarding evening in the theater.

The terrain of "Into the Woods" is the fairy tale world of Jack and his beanstalk, Little Red Riding Hood, Rapunzel, Cinderella, who will intertwine in a variety of ways as they make their respective ways through a tangled undergrowth of wishes, dreams, hopes and modest ambitions.

At the center is the story — created by Lapine — of a hard-working, devoted couple, that baker (Jonathan Raviv in a beautifully calibrated, performance) and his sterile wife, a dazzling Mara Davi, who misses not a beat or nuance as a frustrated, deprived woman who knows how to seize and opportunity when it comes knocking. That opportunity appears in the guise of a witch (Mykal Kilgore in a performance that at times, chiefly in the first act, feels too much and at times, chiefly in the second act, not quite enough), who promises to lift the curse that has rendered her barren if the baker can find and bring to the witch the four ingredients of a potion: "One, the cow as white as milk; Two, the cape as red as blood; Three, the hair as yellow as corn; Four, the slipper as pure as gold" — all of that before the chime of midnight in three days' time.

And so the baker sets off, his wife determined to help despite his insistence that she stay home. But Davi's baker's wife is no stay-at-home wannabe. This is a headstrong, resolute, clearheaded woman who knows what she wants and is quick and resourceful enough to figure out how to get it "If you know / What you want, /Then you go / And you find / And you get it, " she sings. "And you give / And you take / And you bid / And you bargain, / Or you live / To regret it." Her sexuality is fundamental to her. She and her husband have an active sex life but it feels driven more by biological imperative. And so, when in the second act, she clearly is seen by Cinderella's prince as a desirable woman, it becomes a fraught moment as she is caught between her moral sense on the one hand and, on the other, her natural needs and desires — the appeal of being viewed by someone, a handsome stranger, a prince, no less, as an object of desire.

She's not the only one caught between temptation and expediency on the one hand, and moral rectitude on the other. Fidelity, trust, responsibility for your actions are all in play here for each of Sondheim and Lapine's characters. In a very real sense, Calarco sees "Into the Woods" as a coming-of-maturity, coming-of-wisdom, coming-of-age story

"Into the Woods" virtually begins with the words "I wish." And so, the show's first act deals with going after and obtaining what you want. But, as the saying goes, be careful what you wish for. The musical's second act centers around consequences, the price of getting what you want. Everything threatens to come undone, as the mother of the giant Jack slayed in the first act goes on a terrifying, destructive rampage. She wants justice for the death of her son by demanding the surrender of the person responsible for her son's death. In this setting, "happily every after" takes on entirely different connotation. "Careful the wish you make," the characters sing in the show's moving finale, "Wishes are children, / Careful the path they take, Wishes come true / Not free."

The knock on "Into the Woods" over the years has to do with what some feel is too sharp a difference between a first act that seems sunny and playful and a second act that is dark and sobering. The brilliance of Calarco's approach is that here the two acts are, figuratively speaking, one. The lightness of being in the first act is rarely without a kind of edge that hints at the more troubling times to come after intermission.

Together with his designers, especially set designer Brian Prather, Calarco has created a world on the Boyd-Quinson Mainstage that embraces the audience while it enfolds its characters.

The essence of Prather's design are three walkthrough frames — one round, one a tall rectangle, one square — on small, mobile platforms through which the characters move in and out. Those shapes are reflected above the stage as the action shifts to the woods. Fragments of those shapes meld with thick, gnarled marblelike shapes that suggest a dense aggregate of tree limbs and trunks.

There isn't a moment when there isn't a sense of movement onstage. In Calarco's constantly flowing staging and Mayte Natalio's seamless choreography, "Into the Woods" is a study in perpetual motion — external and internal.

The production also is noteworthy for its remarkable sense of ensemble. Despite that, there are some standouts.In addition to the aforementioned Davi and Raviv, there is Thom Sesma's smooth, reassuring Narrator; Amanda Robles' authentic, realistic Cinderella; Dorcas Leung's feisty Red Riding Hood; and Kevin Toniazzo-Naughton in sly double duty as Red Riding Hood's Wolf and Cinderella's vain, self-centered Prince, whose "moment" in the woods with Davi's baker's wife is a sly revelation. As The Witch, Kilgore is at his most authentic in an affecting duet with Anna Tobin's Rapunzel in the first act — "Stay With Me."

In combination with Darren R. Cohen's sure-handed musical direction, Barrington Stage's "Into the Woods" is theater storytelling at its most accomplished

If you've never seen "Into the Woods" onstage, this masterly production is a richly rewarding introduction. If you have seen it onstage before, this production will make you look again with fresh eyes. And, after all, isn't that what art, any art, asks us to do? To look? To see?