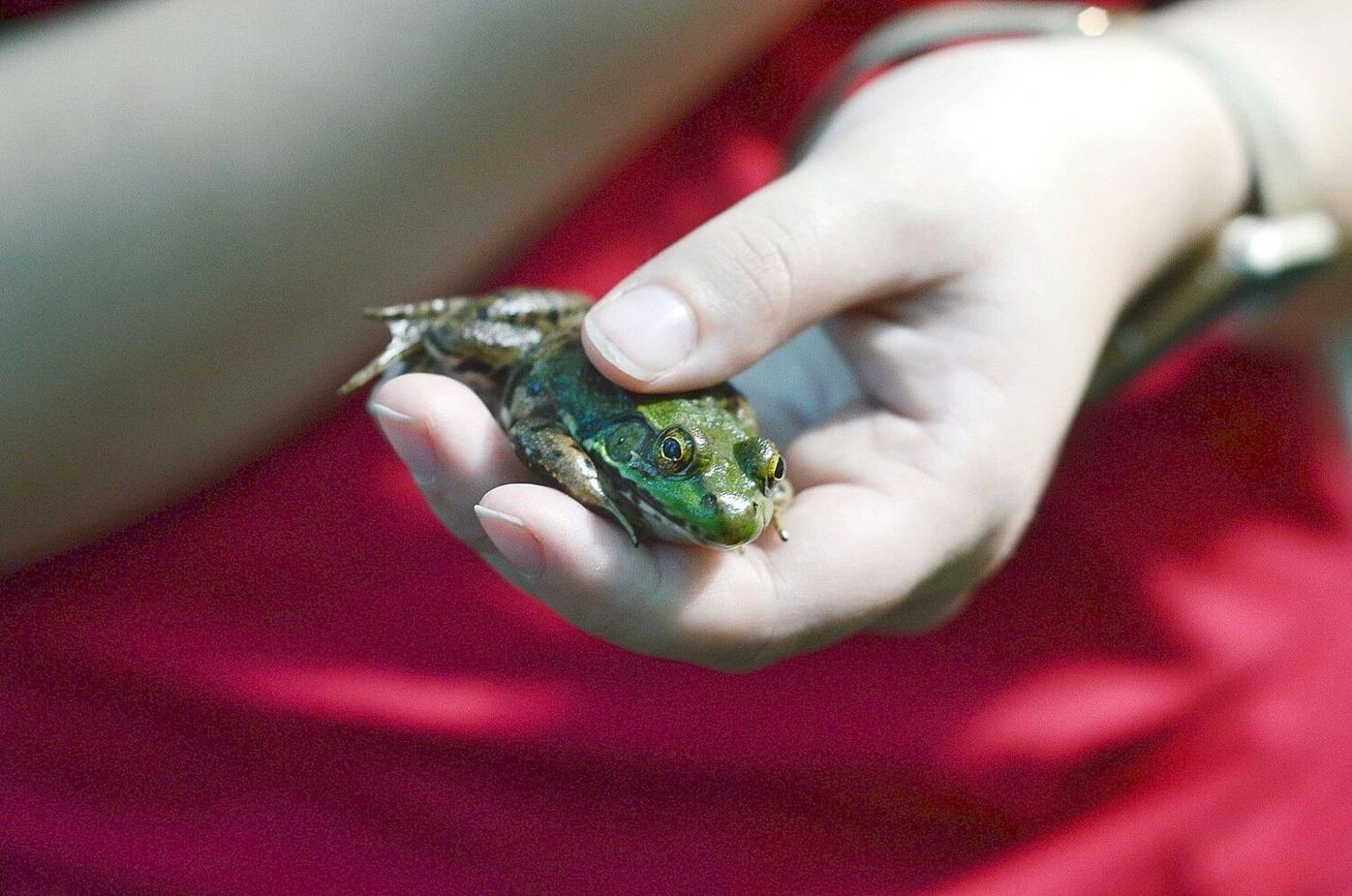 Giulia de Gennaro, a junior at Simon's Rock, holds a green frog for closer inspection Saturday at Hopkins Forest in Williamstown during the Berkshire Bioblitz. 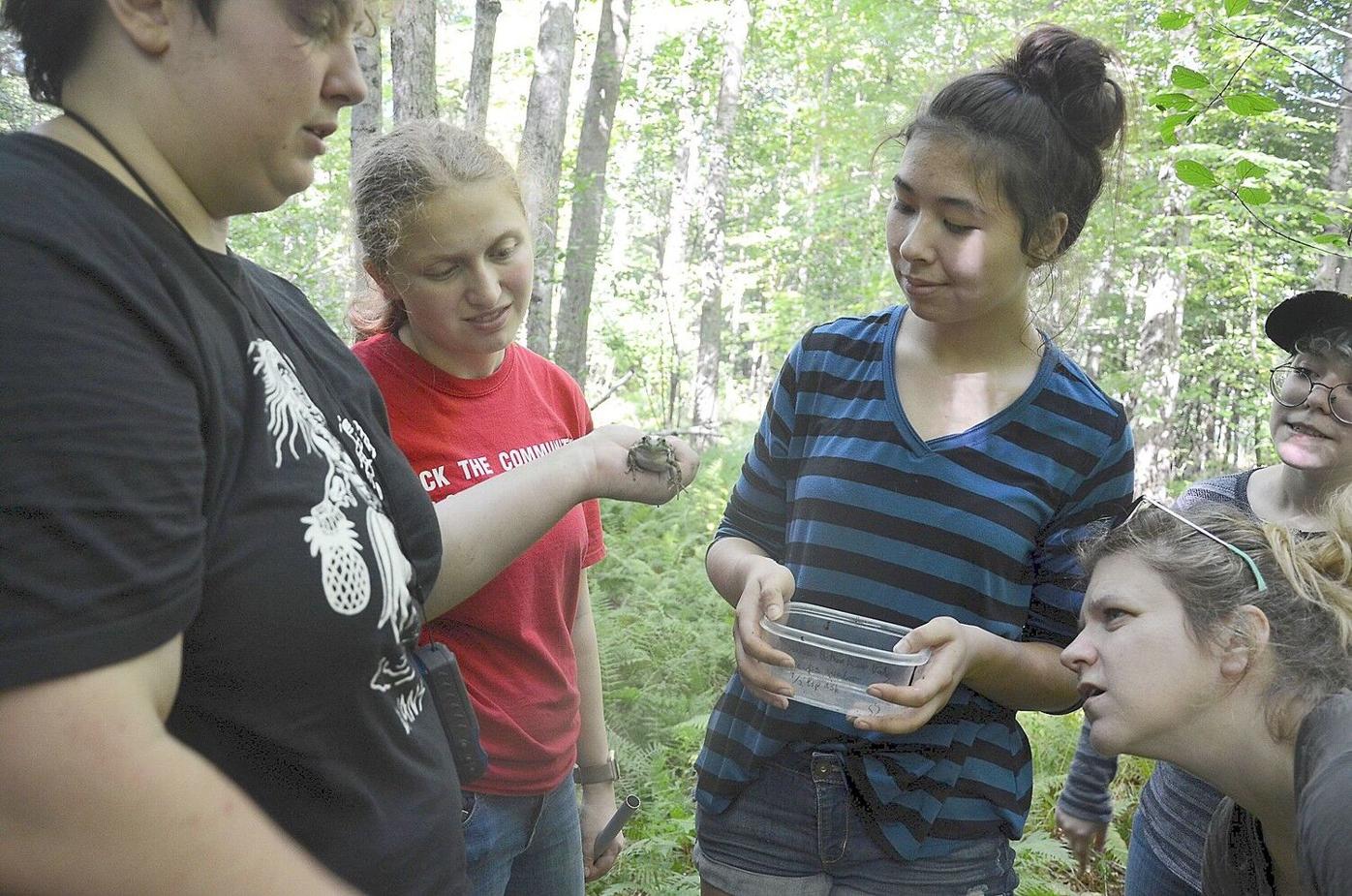 Giulia de Gennaro, a junior at Simon's Rock, holds a green frog for closer inspection Saturday at Hopkins Forest in Williamstown during the Berkshire Bioblitz.

WILLIAMSTOWN —After flipping over several soggy logs in a Hopkins Forest pond on Saturday, Bard College at Simons Rock herpetology students surrounded 18-year-old Zeda Wolf to examine a redback salamander she let crawl up her arm.

The worm-like amphibian was one of several creatures the class inventoried during the 9th annual Berkshire BioBlitz, a 24-hour period where scientists, environmentalists gathered in Hopkins forest to collect data on the plant and wildlife.

More than 30 specialists were on site during the event in the in the 2,600- acre reserve.

"The goal of the Bioblitz is to really find and document as much biodiversity as we can," forest manager Drew Jones said about the effort to determine what species are arriving and disappearing from the area. "We can't know all that with one snapshot, but it could give me information about things I didn't know are here."

The herpetology students and their professor, Sarah Snyder, stayed in their wheelhouse on Saturday and focused on documenting snakes and amphibians in the forest.

A few months in advance of the event, Jones placed boards in an open field to encourage snakes to gather under them to cool off. There are eight known species of snakes that are known to live in the forest, none of them venomous according to Jones.

While the group didn't have any luck finding reptiles under the boards, earlier in the day they caught a glimpse of a snake before it quickly slithered away before they were able to identify it.

When it's hot outside, like it was Saturday, snakes can move especially fast, Jones explained.

"We need a GeoBlitz, so stuff doesn't move as quickly," Simon's Rock geophysicist Mike Bergman joked after lifting one of the boards.

Frogs were easier to catch.

Deep in the woods near a murky pond, Guilia de Gennaro, 17, ran her finger up the back and head of a green frog her classmates were able to wrangle.

Green frogs and bullfrogs are both common to the area and look similar. The easiest way to tell them apart is by looking for the dorsolateral ridges, which are different between the two, she explained.

Aside from documenting the presence of native plants and wildlife, the Williams College-hosted BioBlitz was also an opportunity to collect data on invasive species in the area.

"The issue with some invasive species is that they cause major competition with native species," Jones said. "They're often pushing out species we think of as beneficial."

One example of a potential dilemma is the presence of the Norway maple, a poorly producing sap tree, Jones said.

"If that pushes out out the sugar maple, we'll lose all our ability to make maple syrup," he said.

During the 2012 Berkshire BioBlitz, invasive hardy kiwi was found in the forest of Burbank Park in Pittsfield, according to Jane Winn of Berkshire Environmental Action Team, one of the parterning organizations.

"As a result of the BioBlitz, we are now working hard to eradicate this invasive vine," she said.