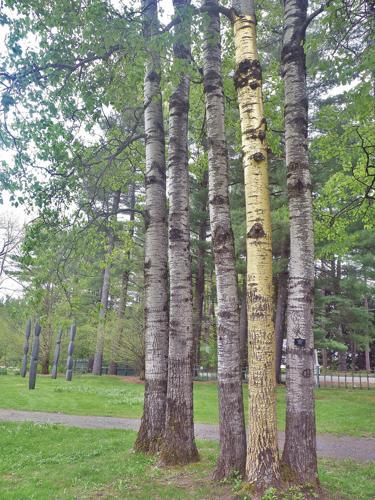 Toni Ross' "Found Lines" uses gold leafing on bark to accentuate the graphic qualities that are naturally inherent in the trees. 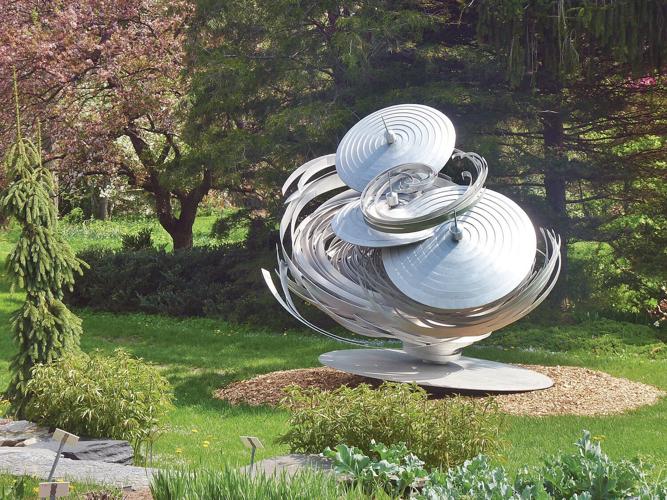 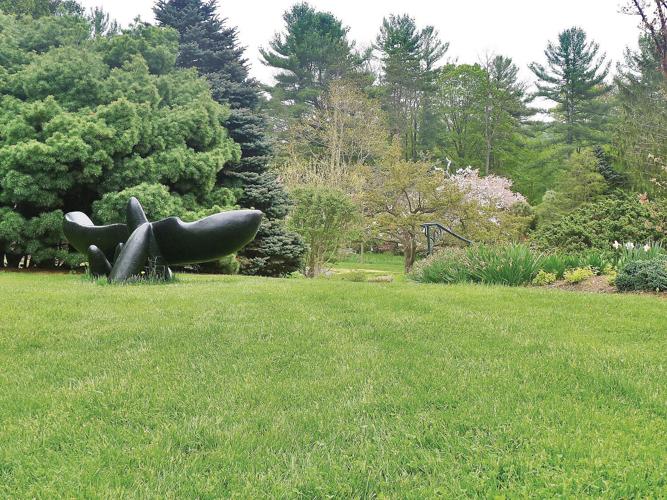 Wendell Castle, who created this sculpture "Grand Temptation," 2014, is known as the father of American studio furniture by many in the design world. 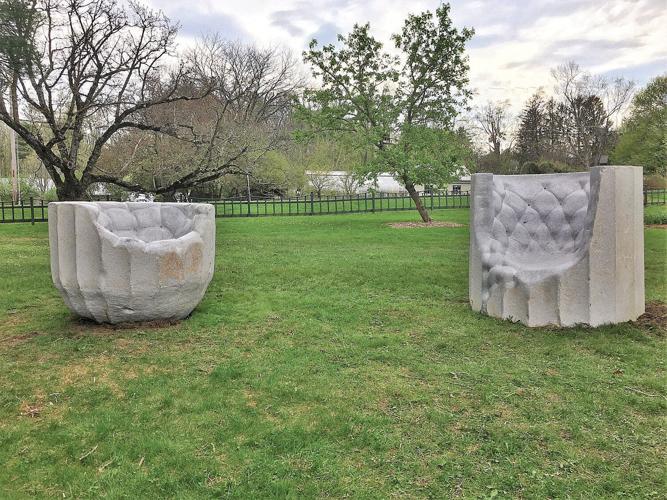 Toni Ross' "Found Lines" uses gold leafing on bark to accentuate the graphic qualities that are naturally inherent in the trees.

Wendell Castle, who created this sculpture "Grand Temptation," 2014, is known as the father of American studio furniture by many in the design world.

The next time you see outdoor sculpture on display, take a moment to consider how it got there. As Berkshire Botanical Garden board chairman Matt Larkin knows only too well, moving several tons of valuable art is no walk in the park.

Larkin, a garden and interior designer by profession, has been overseeing the installation of "Beautiful Strangers: Artists Discover the Garden," this summer's sculpture show at the garden in Stockbridge. The exhibit will open Saturday at the annual "Fete des Fleurs" gala.

In making his selection, Salomon looked for "some sort of reference to nature, either physical, psychological or material," he explained. Several artists including Stephen Talasnik and Toni Ross created "compelling site-specific pieces" for the exhibit, according to Salomon.

Salomon has worked with internationally acclaimed sculptor Alice Aycock on projects around the world for over a decade. Her contribution, "Untitled Cyclone," "has to do with motion and energy and turbines, flying saucers and dance, whirling dervishes and Fred Astaire, all of those things wrapped into one," he said. "In the end, it's about energy, wind and nature."

Salomon is used to displaying art in natural spaces — he ran a seasonal gallery in the woods in East Hampton, N.Y., near where he grew up. While this is his first entirely outdoor sculpture show, he's familiar with heavy lifting. "I do like the machines," he admitted, "the bigger the production, the more exciting things get."

Larkin has supervised garden exhibit installation for many years, helping artists site their work. "[He] knows the nuances of the property very well," Salomon said.

"Untitled Cyclone" is part of Soho-based artist Aycock's Turbulence Series, recently displayed at Marlborough Gallery, which represents her work. The artist is also no stranger to heavy machinery — in 2014, a crane installing seven of her monumental works in New York City brought Park Avenue traffic to a halt.

Recently, on a day when rain clouds played tag in the skies, the normally peaceful garden was filled with loud, earth-moving mechanical and manual activity as landscape construction of its Center House entry garden raced to completion.

At 7 a.m. that morning, Larkin had been laying rubber mats to prevent oversize crane wheels from scarring the lawn.

An orange Lull forklift truck with a telescopic boom from Berkshire Crane & Logistics maneuvered through the property, deftly depositing 2,600 pounds of aluminum sculpture on to a one ton steel base.

"I'm well connected to all the trades so I know who to call to get something done," Larkin said — especially when it comes to relocating heavy, delicate and expensive artworks.

With an expert eye, Florida fabricator Leo Sierra transformed the tangled heap of curved aluminum strips and discs into an intricate silver cyclonic swirl, flying saucers caught up in its dizzying kinetic eddy, the crane at the ready to help make subtle adjustments.

Larkin reviewed the artworks so far installed on site. A wide, elegantly curved half-ton bronze sculpture by artist Wendell Castle, who passed away recently, was cast in Paris, France, its scored and rough hewn surface doubling as a functional bench from which to admire the view. The intricate bamboo reed hive-like structure Stephen Talasnik had woven directly into a beech specimen tree will oxidize in time to match the bark, Larkin said.

Mark Mennin's enormous interactive "chairs" — Larkin hopped on board one to demonstrate — are made from repurposed granite columns from an old New England bank building. The insides are carved to resemble opulent button upholstery.

A Roman torso inspired Ned Smyth's 14-foot-tall abstract sculpture, the shape copied from a 4-inch fragment of glacial rock. Its formidable presence is merely an illusion, though — it is made of carved styrofoam covered in fiberglass.

Not all the artworks are monumental. Toni Ross has gilded portions of tree bark on several trees with varying shades of gold leaf, while Rob Wynne's pendulous Teardrops "look like sap coming out of the tree," Larkin said.

The annual summer exhibit, with its diverse themes from oversize ceramic containers to whimsical children's playhouses, was created to encourage repeat visitation.

Admission: Included in general garden admission of $15, students $12, free under age 12. Half price on Tuesdays.