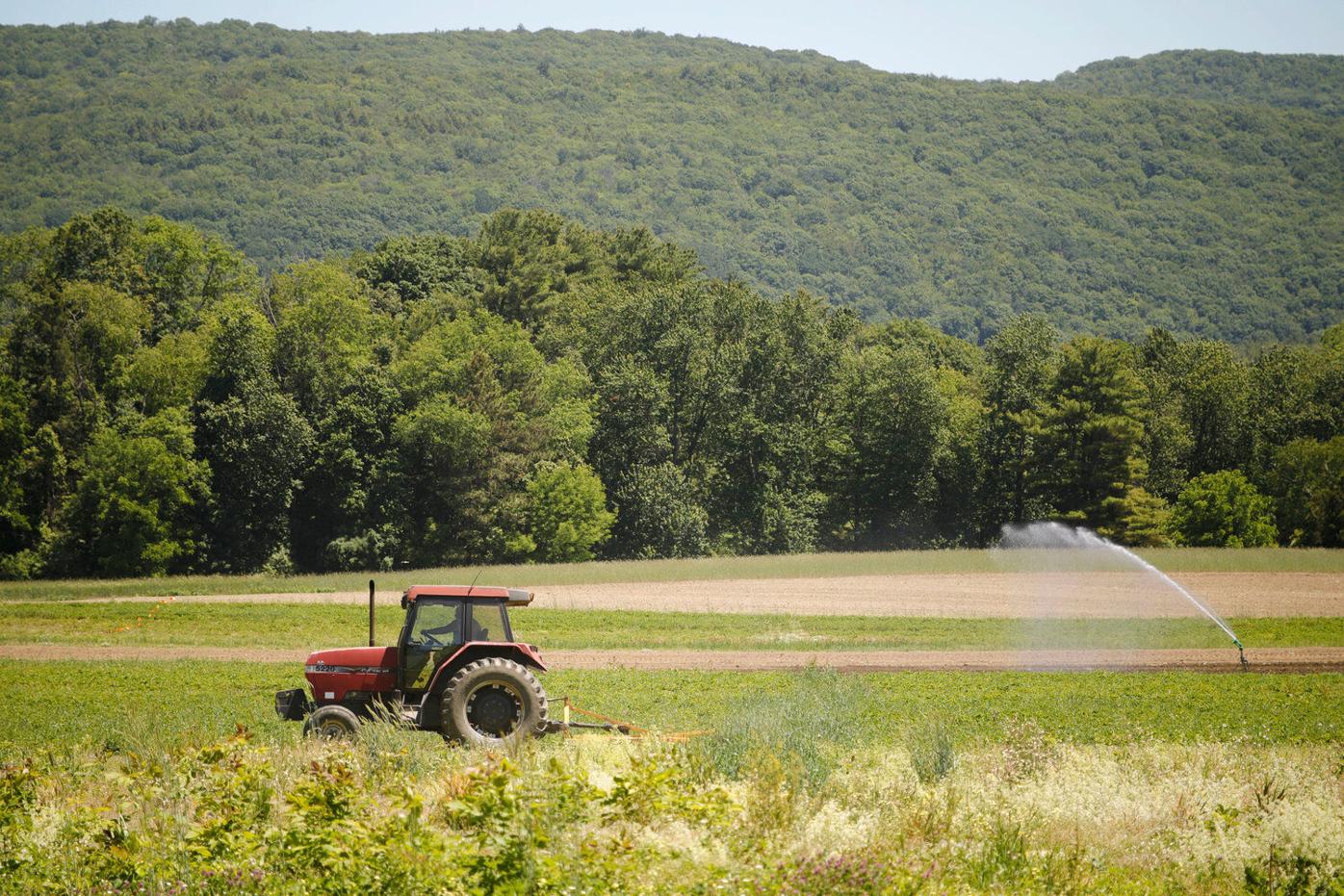 Farmers prepare the fields for planting recently at Mountain View Farm in Lanesborough. Despite recent downpours, the region is in a moderate drought, according to the U.S. Drought Monitor.

The U.S. Drought Monitor upgraded the Berkshires and most of Massachusetts last week from a "D0" intensity, signifying abnormally dry conditions, to "D1", meaning a moderate drought.

Farmers prepare the fields for planting recently at Mountain View Farm in Lanesborough. Despite recent downpours, the region is in a moderate drought, according to the U.S. Drought Monitor.

The U.S. Drought Monitor upgraded the Berkshires and most of Massachusetts last week from a "D0" intensity, signifying abnormally dry conditions, to "D1", meaning a moderate drought.

PITTSFIELD — It might be hard to believe after this weekend's thunderstorms, but Berkshire County is in a drought.

The U.S. Drought Monitor upgraded the Berkshires and most of Massachusetts last week from a "D0" intensity, signifying abnormally dry conditions, to "D1", meaning a moderate drought. That designation could be updated on Thursday, but it's by no means guaranteed that recent precipitation will change the county's status.

At the National Weather Service in Albany, N.Y., meteorologist-in-charge Raymond O'Keefe said summer weather will likely maintain the drought for the foreseeable future.

"At least over the next month or so, we're looking at dry conditions, below normal precipitation," he said.

Part of the problem is the nature of summer precipitation. Rain in the summertime usually occurs in thunderstorms, which dump a lot of water on a small area for a brief period of time. On Sunday and Monday, for instance, Pittsfield received about 2 1/4 inches of rainfall.

While it's better than no rain at all, that type of system won't cure regional drought.

"Generally speaking, we are stuck with this for the rest of the summer," O'Keefe said of drought conditions.

Relief could come in the fall when more consistent rain patterns occur, he said. But until then, evaporation will occur quicker than precipitation can replenish the landscape.

The current drought isn't record-breaking for the Berkshires, but O'Keefe said it's not far off.

Rainfall data for Pittsfield shows that the least amount of precipitation between April 1 and June 28 occurred in 1964, when the city received just 6.12 inches of rain. This year, it's 8.84 inches. The average, meanwhile, is 12.24 inches.

But while the dry weather is real, it's not time for the alarm bells to go off, said Ricardo Morales, commissioner of public utilities for the city of Pittsfield.

"We don't have any indication so far that there's going to be a water shortage," Morales said. "We just have to keep an eye out, pay attention to the water levels."

Those water levels are at the five reservoirs from which Pittsfield gets its water. The largest one, Cleveland Brook Reservoir, is about 3 feet below its standard level right now, despite the recent rain. Morales estimates that another three weeks of low precipitation could lower that to a 4-foot deficit.

Once the reservoir is 4 feet below normal, the severity of the city's drought would escalate from the "normal" stage to "mild," according to guidelines compiled by the state and city that Morales shared via email. The city could institute water restrictions if the severity reaches "significant" — one stage up from mild, but less than the highest stages of "critical" and "emergency."

"If we continue this trend or if we see reservoir levels dropping at a faster pace, we may be compelled to act quickly to implement conservation steps throughout the community according to our drought management plan," Morales wrote.

In Lenox, water superintendent Bob Horn is well aware of the situation Berkshire County could find itself in. His town's two reservoirs are at a good level right now, but the brook that feeds them is starting to lag. Horn said the town has benefited from a decrease in water usage created by the lack of summer tourism due to COVID-19.

In response to the drought, Horn posted suggestions on the town website, teaching residents to effectively water their lawns without wasting water. He hopes the educational effort can prevent a shortage, or else the town might have to restrict how much water residents can use.

"Right now we're not looking to do that," Horn said, "but we'll have to wait and see next month or so."