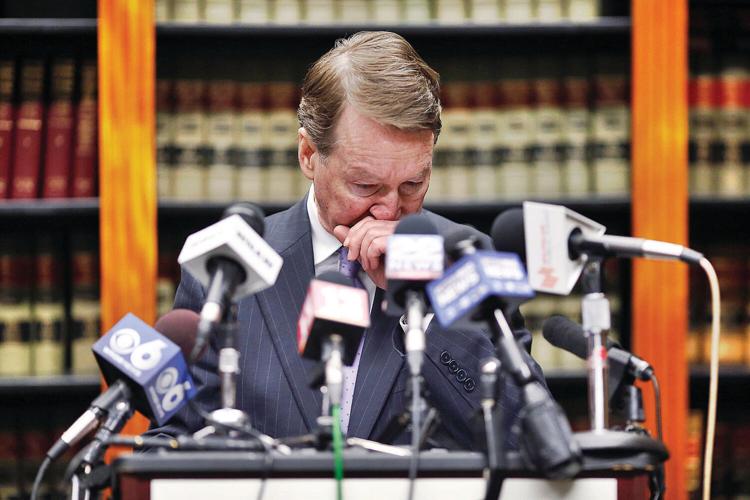 Berkshire District Attorney David F. Capeless tears up Thursday as he announces his retirement after 14 years as the county's top law enforcement official. By stepping down now, he said, he hopes to help his successor, Paul Caccaviello, get elected in the fall. 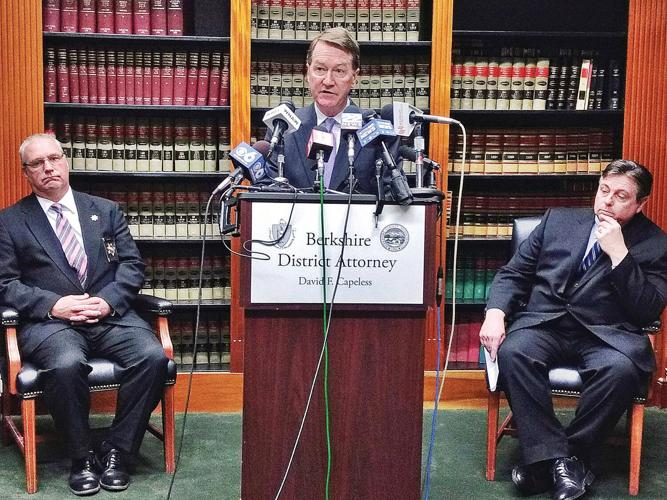 Berkshire District Attorney David F. Capeless on Thursday announces his upcoming retirement as of March 15. He will be replaced by First Assistant District Attorney Paul Caccaviello, right. At left is Sheriff Thomas Bowler.

Berkshire District Attorney David F. Capeless tears up Thursday as he announces his retirement after 14 years as the county's top law enforcement official. By stepping down now, he said, he hopes to help his successor, Paul Caccaviello, get elected in the fall.

Berkshire District Attorney David F. Capeless on Thursday announces his upcoming retirement as of March 15. He will be replaced by First Assistant District Attorney Paul Caccaviello, right. At left is Sheriff Thomas Bowler.

PITTSFIELD — In a surprise announcement Thursday morning, Berkshire District Attorney David F. Capeless said he is stepping down and will retire from his post, effective March 15.

"Thirty-five years as prosecutor, the last 14 as district attorney, have been both rewarding and taxing," he said. "I feel someone else should have all the fun for a while."

Capeless, 65, will be replaced by current First Assistant District Attorney Paul Caccaviello, who will be sworn in on the March 15 at the Berkshire Superior Courthouse.

"I had determined some time ago that I did not wish to seek re-election in the fall, and, when I confided this to Paul, I was pleased when he said he would take on the campaign to succeed me," he said.

Capeless did pick up nomination papers Feb. 14 from the Springfield branch of the Secretary of State's Office, but that neither guarantees a candidate will run, nor obligates them to do so.

"I'm taking this step now, because I want Paul to be able to run as the district attorney, as I did 14 years ago," Capeless said. "I want to thank Gov. [Charlie] Baker and Lt. Gov. [Karen] Polito for their careful consideration and confidence that Paul is the right person for the job."

"I have great respect for Paul's character and abilities and he has the experience and trust of our colleagues in law enforcement to give me the confidence the the Berkshire District Attorney's Office's legacy of fair and even-handed justice will continue under his watch," he said.

Capeless touted his accomplishments during his tenure, including prosecutions of "many difficult and notorious cases."

When asked for some of those specific cases, Capeless referenced the prosecutions of Lewis Lent, who kidnapped and murdered 13-year-old Jimmy Bernardo, of Pittsfield, in 1996; Wayne Lo for the 1992 shootings at Simon's Rock College in Great Barrington that left two dead and four wounded; and the 1997 conviction of Adam Rosier for the murder of Kristal Hopkins, of Pittsfield.

He noted that case also led to a decision by the state's Supreme Judicial Court, which recognized a particular method of DNA testing, which Capeless said remains the industry standard.

His most recent high-profile convictions were those of Adam Lee Hall, David Chalue and Caius Veiovis in 2014 for the kidnapping and murders of three men in 2011. Those convictions resulted in multiple life sentences without parole for the three, "despite no identified crime scene or weapons or any forensic evidence directly linking the defendants to the brutal crimes," according to a statement from the DA's office.

Capeless said he will be sworn in as a special prosecutor to handle any appeals that come up on those cases.

"I'm proud of what I've accomplished in my career. I leave with my head held high, though my shoulders may have sagged a bit," he said.

Capeless appeared to get emotional, choking up and pausing while he praised his staff and the assistant district attorneys he oversees.

"I am most proud of the people, who are the Berkshire District Attorney's Office, he said. "They are — all of them — talented, professional, ethical, dedicated and hard-working and the greatest reward of my career has been to work with them and lead them," he said. "Prosecution is not an easy job, and too often our successes are taken for granted."

When Capeless was asked whether there were any specific reasons he was choosing to retire now, he replied, "It's been 35 years. It's been long; this is not an easy job.

"I realized I'd rather be doing something else," he said. "In fact, nothing."

Pittsfield Police Chief Michael Wynn said he was surprised by the announcement, but he understood and respected the decision.

"I have worked with David for my entire career, both locally and on statewide issues," he said in a statement.

"His leadership on the investigation and prosecution of domestic violence cases, crimes against children, internet crimes, the opioid epidemic, and human trafficking cases has changed the fabric of Berkshire County law enforcement for the better and his legacy is considerable," Wynn said. "His retirement is well deserved."

"I want to wish David all the best for his well-deserved retirement," said Pittsfield Mayor Linda Tyer. "During difficult criminal investigations that were taking place here in Pittsfield, David calmly and confidently provided me with guidance and sage advice."

"I will always remain grateful for having benefited from his wisdom," Tyer said.

"Governor Baker and Lt. Governor Polito thank District Attorney David Capeless for his thirty-five years of dedicated public service to this Commonwealth, appreciate his commitment to protecting the citizens of Berkshire County and wish him well in his retirement," part of a statement from Baker's office reads.

Northwestern District Attorney David Sullivan said, "DA Capeless has had an outstanding career as a prosecutor. His dedication and commitment to justice have been exemplary. He will be missed by his community and colleagues."

His support in the community has not been universal, however.

As district attorney, Capeless has been zealous in his prosecution of even nonviolent, low-level drug crimes.

In one such case, which was cited by Judith Knight, his challenger in the 2006 election, Capeless twice brought to trial the case of a teenager accused of selling drugs in a Great Barrington parking lot. Knight was the teen's attorney.

Because of the parking lot's proximity to a church, which held day care programs, the teen faced enhanced "school zone" charges.

After a hung jury in the first trial, Capeless tried again to prosecute the case, but a jury found the teen not guilty. Knight and some legal organizations criticized Capeless for his dogged prosecution in the case.

Capeless said decisions regarding who will replace Caccaviello as first assistant DA and any other staff reassignments or changes will be left up to Caccaviello.

He began his career as an assistant DA in Middlesex County in 1982, and came to work in the Berkshire office in 1991. He was appointed in 2004 to succeed Berkshire District Attorney Gerard Downing, who died while in office. He won a special election for the seat that fall and won elections for three more four-year terms after that.

He graduated from the University of Pennsylvania and Boston College Law School. He currently lives in West Stockbridge with his wife, Betsy, and his two sons, Charlie, 22, and Sam, 20.

Caccaviello has been a prosecutor for 28 years, the last 13 of which have been as first assistant DA. In 2008, Caccaviello was named Prosecutor of the Year by the Massachusetts District Attorney's Association.