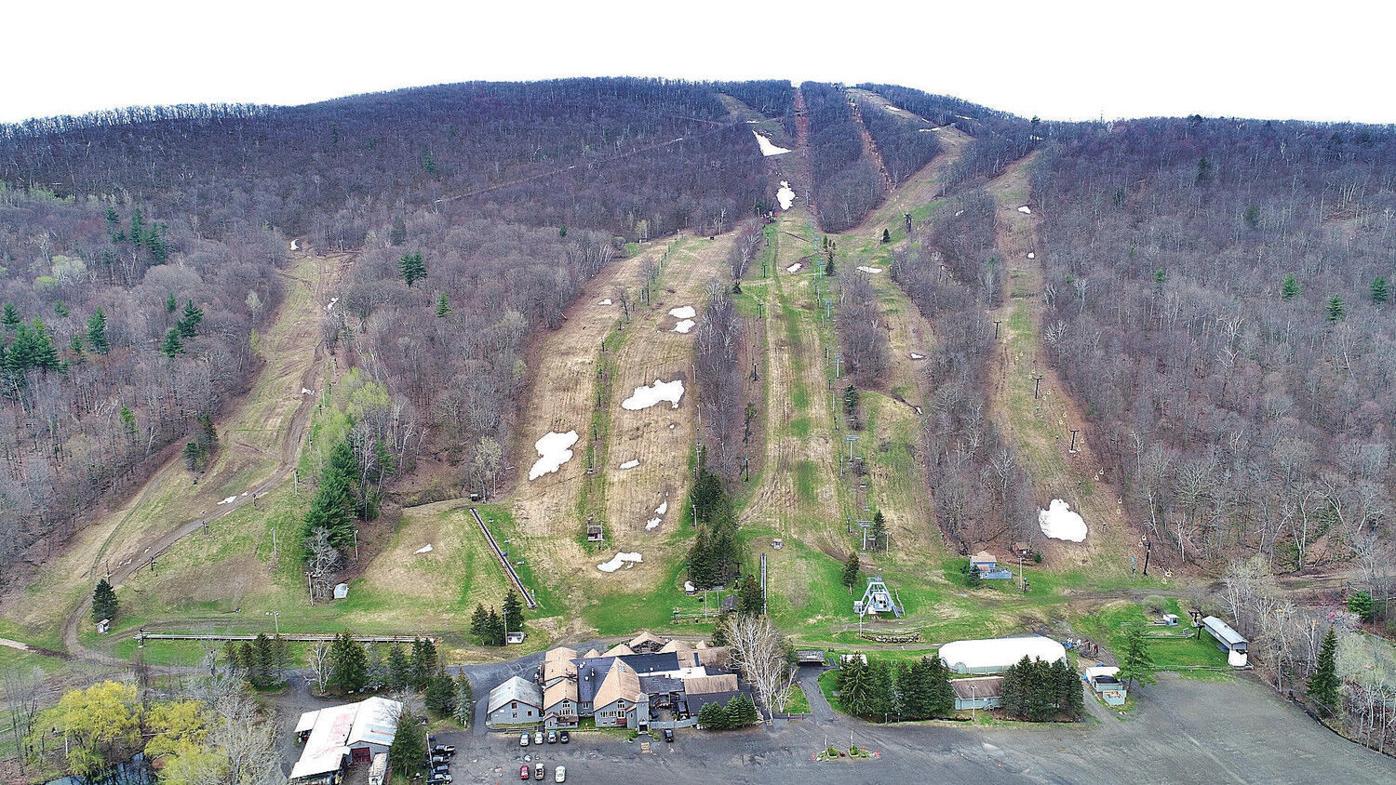 Catamount Ski Area in Egremont, Mass., and Hillsdale, N.Y., has entered into a agreement to be sold to Berkshire East. A few patches of snow cling to the slopes. 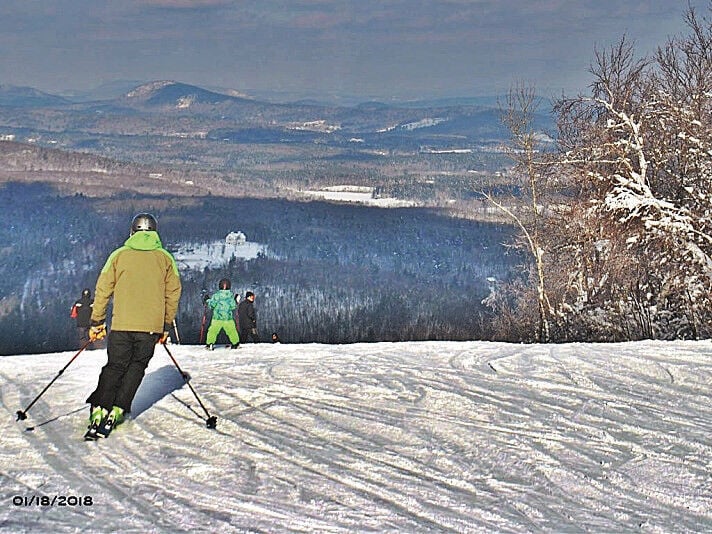 Skiers navigate the slopes at Catamount Ski Area in winter. One pleasing obstacle might be distraction caused by the sweeping view.

Catamount Ski Area in Egremont, Mass., and Hillsdale, N.Y., has entered into a agreement to be sold to Berkshire East. A few patches of snow cling to the slopes.

Skiers navigate the slopes at Catamount Ski Area in winter. One pleasing obstacle might be distraction caused by the sweeping view.

PITTSFIELD — The owners of Berkshire East Mountain Resort in Charlemont have reached an agreement to purchase Catamount Ski Area on the Massachusetts-New York state line, representatives of both entities announced on Friday.

The purchase price was not disclosed; the sale is expected to close within the next two weeks. The deal will allow Catamount to remain under the current management team that has owned the 79-year-old ski area since 1973, a key provision of the sale.

An all-season resort, Catamount employs 450 people during the winter months.

"We're assuming Catamount in its current state of operations," said Jon Schaefer, a member of the Berkshire East family ownership group, when asked if all of Catamount's current employees will be retained.

The Schaefer family has owned Berkshire East, located on Institute Mountain in Charlemont and Hawley, since 1975. The current ownership group include Jon Schaefer, his brother, Jim, and their father, Roy. Berkshire East was struggling financially when the Schaefers obtained the property.

Jon Schaefer referred to the transaction as a "logical step" in Berkshire East's continued growth.

"We've been working aggressively at Berkshire East to grow our business" he said. "To offer more value to both sets of customers moves us to a new market. It put us in an area where hopefully we can have some of the summer activities that we can bring.

"Eighty-five percent of the Catamount customer base is from New York; probably 75 percent of ours is Massachusetts and Connecticut," Schaefer said. "What we've done (for the summer) may or may not be applicable at Catamount. But it's an area of focus for us."

Catamount President Tom Gilbert and Vice President Rich Edwards are the sons of Bill Gilbert and Don Edwards, who along with Sandy Gilbert purchased the then financially strapped ski area 45 years ago. Bill Gilbert, who co-invented the airless snow gun, died in January 2016.

An all-season resort, Catamount is one of only four ski resorts in the United States that is located in two different states. Gilbert and Edwards had been looking for ways to generate more revenue — a planned luxury/condo complex known as the Berkshire Mountain Club fell through in 2015 when the developer pulled out.

Looking for additional capital to stay competitive, the two men put Catamount on the market last month and hired a broker, Mirus Resort Advisors of Burlington, to assist them with the search. A ski industry trade publication reported in April that Gilbert and Edwards were seeking either an investor, a joint venture partner, or a new owner/operator for the mountain.

"To remain really competitive in the ski industry there's many things that need to be done, and we've been trying over the years to raise some capital to do these projects," Gilbert said. "We realized we were not successful in raising capital and realized we needed to bring something in."

"We know we needed some capital investment," he said. "We remained open-ended about how that should be. What was important for us was to find a partner or a buyer that wanted to keep Rich and I actively in the ski industry. How that would work out was an open-ended question."

Familiarity was also a factor in the deal coming together so quickly. The owners of Berkshire East and Catamount have known each other for years, and Gilbert said he and Edwards reached out to the Schaefers the day after they hired a broker

"I had really hoped that they would consider this, because of what they've accomplished at Berkshire East," Gilbert said. "It's something that I observed over the last 12 years on a personal and professional level. It's exactly what I think we should be doing at Catamount."

"We share a lot of the same vision about what needs to be done," Gilbert said. "Berkshire East was there with the same vision — and the capital that we didn't have — to bring us forward."

Also an all-season resort, Berkshire East has spent the last few years building up its summer activities, which include zip lines, one of the longest mountain coasters in North America, a mountain bike park, and white-water rafting on the nearby Deerfield River.

Due to the speed in which the deal took place — "this has been a very quick courtship," Schaefer said — he didn't provide specifics on the changes new ownership would make at Catamount.

"A lot's on the table," he said. "We would use the model with what we've done at Berkshire East, which was in a very similar state a decade ago with aging snow making and lift infrastructure. You start at the basics to really affect the customer experience. It could be some new snow guns, coats of paint. ... Just really diving in and getting to work."

Catamount is the fourth Western Massachusetts ski area to go on the market in the last 18 months, according to newenglandskiindustry.com. Otis Ridge in Otis was sold to Ski Butternut in Great Barrington in December 2016, while Ski Blandford was sold last September. Bousquet Ski Area in Pittsfield went on the market this winter.

"This is great news as we work to position the region as a center for outdoor recreation," said state Sen Adam Hinds, D-Pittsfield, "The Schaefers are proven leaders in the industry with a track record of success, commitment and serious investment."

At Catamount, the new owners will begin evaluating the facilities this summer, Schaefer said. He said some of the activities that work at Berkshire East may not work at Catamount, so finding "the right mix" of activities will be important.

"Identifying that will be what has worked in the industry at other locations," Schaefer said. But then also what would work for the local communities."

Catamount's current summer activities include an aerial adventure park that opened nine years ago, and a landscaping business, Gilbert said. It's too early to say what other features may be added at Catamount.

"To be determined," Schaefer said. "We need to take the temperatures of our towns and our neighbors, and then also what's popular in our industry. Our experience with summer businesses is that they tend to ebb and flow a little bit more and are trendier. So we need to figure out what the right mix is to bring to Catamount."