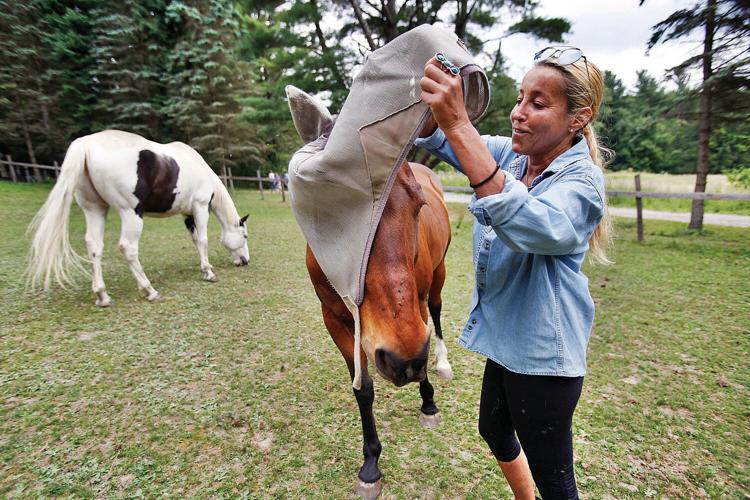 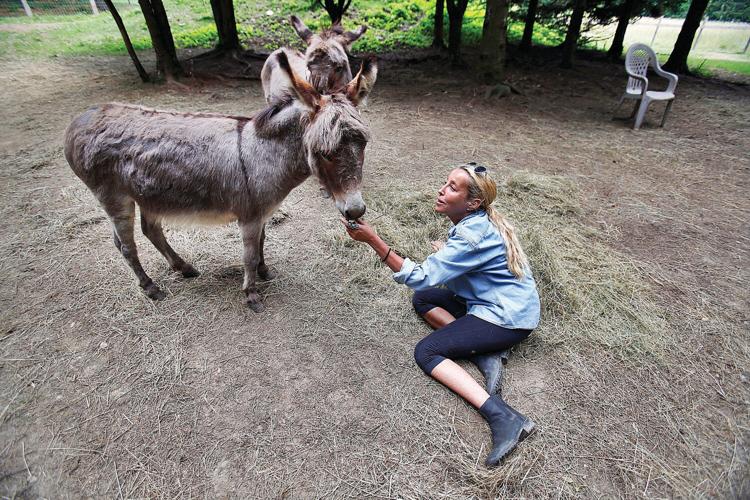 Berkshire HorseWorks owner Hayley Sumner hangs out with miniature Sicilian donkeys Rodeo and Bolt at the nonprofit's home in Richmond in 2018. The nonprofit was recently awarded two grants totaling $6,000. 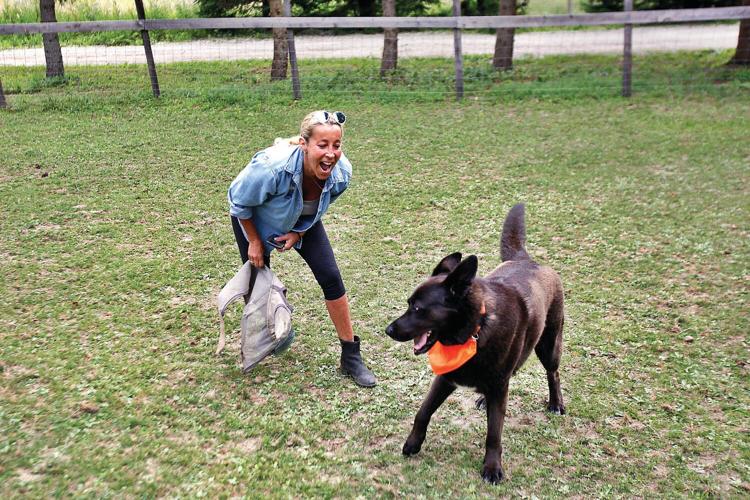 Berkshire HorseWorks owner Hayley Sumner hangs out with miniature Sicilian donkeys Rodeo and Bolt at the nonprofit's home in Richmond in 2018. The nonprofit was recently awarded two grants totaling $6,000.

RICHMOND — For horse whisperer Hayley Sumner, the vision for an equine-based therapeutic center came when she was 10, attending a working-farm camp in Orleans on Cape Cod.

"I had always wanted to wake up in the morning and see horses out the window," she said recently at her tranquil, off-the-beaten-path ranch. "That was the first inspiration. I channeled my `inner cowgirl' as a little rebel child. That's when I wrote a business plan for a working ranch and farm for at-risk kids and families."

In 2013, Sumner created Berkshire HorseWorks, which she operated at the Berkshire Equestrian Center in Richmond. But now, she has settled in to a 7-acre property she purchased last year at 101 Patton Road, off Route 295.

To help support her nonprofit operation, she will hold her second annual major fundraiser, the Derby Gala, on Saturday. The event includes bourbon tasting, hat-making stations, bluegrass music by the Easy Ridin' Papas, a sit-down dinner provided by Simons Catering and a service auction to raise money for equine-assisted therapy programs.

Through its equine-assisted therapy programs, Berkshire HorseWorks provides clients the tools to cope, heal, communicate, thrive and more in today's stressful world, according to its website.

Upon arrival at Sumner's Pura Vida Ranch, a visitor was met by her friendly German shepherd, Noche, "the official greeter" and herd guardian, just as Sumner was finishing her "morning music walk," checking her five donated and adopted horses — Spirit, Zephyr, Double-07, Pumpkin and Gunner — and two miniature Sicilian donkeys, Rodeo and Bolt, while playing them a "song of the day" through her smartphone.

Also part of a new strategic vision: family team-building; Yoga at the Ranch; meditative hikes with horses on ranch trails; pony parties for adults or children, including free donkey-play; and a "couples' experience" trail ride including wine and cheese or beer and wings — "a different kind of date."

She based the revamped vision, in part, on an earned-income model.

"We have added other programming, which not only fulfills community needs but also provides pay-for-play activities," she said. "The income from these new initiatives will be leveraged to fund the growing demand for equine-assisted psychotherapy and life-skill programming already offered."

She stressed that "in order to survive and thrive as a nonprofit here in the Berkshires, one must run it as a business, and adapt to the changing economic and sociopolitical climate."

For Sumner, it was a long and winding trail from a childhood in New York City to an idyllic ranch in Berkshire County.

After graduating from Northwestern University in Chicago with a goal of becoming a globe-trotting foreign correspondent, she shifted to ad agency work, specializing in promoting films for Disney's Touchstone Pictures and a New York rock concert series.

She pursued her need to "live with whimsy but make choices" by becoming a hostess at Manhattan's famed Hard Rock Cafe. Soon, after some training with well-known publicist Bobby Zarem, she formed her own PR agency with a partner. Based in Los Angeles, the firm had 120 employees and 90 clients during its 20-year run.

One of Sumner's projects was working with Donald J. Trump to publicize his newly opened Mar-a-Lago resort in Palm Beach, Fla.

After tiring of the LA entertainment scene, she pulled up stakes, rented an RV and drove cross-country for five months with her Rottweiler, Brando, a therapy dog.

Her mission was figuring out how to make a living by merging her passion for horses with the nonprofit world. Landing in Kentucky, the heart of equine country, she purchased a horse at auction that she named Definitive Whim and spent two years in the state, learning the ropes by walking yearlings at 5 a.m. on local farms.

After being told she had to put her horse down ("the most devastating thing I've ever had to do"), Sumner fled Kentucky and ended up in the Berkshires, having attended Camp Taconic in Hinsdale.

Within weeks after successful treatment for breast cancer in 2013, she started adopting rescue horses and opened Berkshire HorseWorks, using her certification in Eagala, an equine-based therapeutic program for people with mental health and behavioral issues and adding equine-assisted team-building.

It was a for-profit enterprise for its first year, but Sumner converted it to a 501(c)3 nonprofit in 2014 to accommodate a growing clientele seeking equine psychotherapeutic assistance.

"With the opioid epidemic, school bullying, people falling through the cracks, I decided I had to make a change," she said, relocating from the Berkshire Equestrian Center to her own ranch.

With the help of broker Barbara Schulman from Berkshire Property Agents, she bought the farm property in May 2017, close enough to Pittsfield to accommodate a major client, the Berkshire County Sheriff's Office, which assigned 11 inmates to a community service project clearing the land and building a paddock.

A month later, it was moving day for the horses. Sumner walked Spirit, who was too skittish for a trailer, along 2 miles of Route 41 with a Sheriff's Office escort.

More recently, the donkeys were acquired at the suggestion of Beacon Cinema owner Richard Stanley for his "Put Your Ass in Our Seats" promotional campaign. Sumner located them at filmmaker Douglas Trumbull's farm in New Marlborough.

All of Sumner's animals — the donkeys, the horses and her Dutch Labrador — take part in programs for inmates, children and adult clients.

"With a new strategic vision, we've been able to see more clients for therapeutic site visits," she said.

Her nonprofit operates with a five-member board, several full- and part-time staff members, and specialists and interns from Berkshire Community College, all on a $200,000 annual budget, funded by grants, donations, program fees and fundraisers.

"We really need the support of the business community in Pittsfield to help us be sustainable during the current transition," she said.