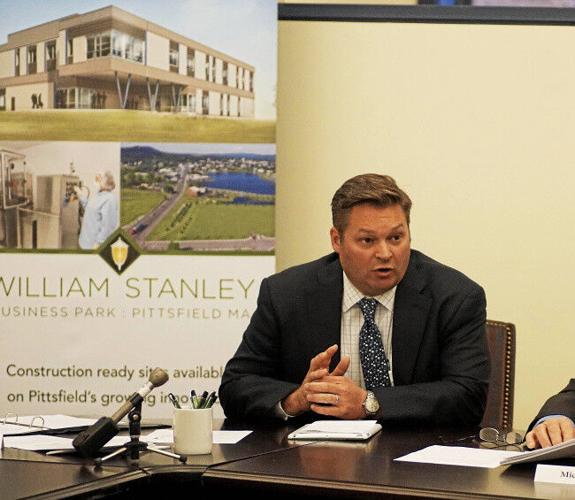 Stephen Boyd, president of the Berkshire Innovation Center board, told members of the Pittsfield Economic Development Authority board on Monday that the project's funding gap could be as high as 6 million. 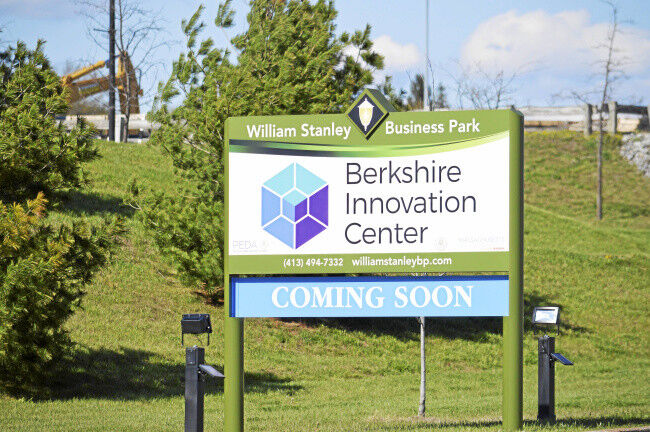 A sign marks the future home of the Berkshire Innovation Center on East Street in Pittsfield. The center is not expected to open until 2017.

Stephen Boyd, president of the Berkshire Innovation Center board, told members of the Pittsfield Economic Development Authority board on Monday that the project's funding gap could be as high as 6 million.

A sign marks the future home of the Berkshire Innovation Center on East Street in Pittsfield. The center is not expected to open until 2017.

PITTSFIELD — Construction costs for the 20,000-square-foot Berkshire Innovation Center could be as much as $6 million over budget, the president of the BIC's board of directors said on Monday.

Speaking at the Pittsfield Economic Development Authority's board meeting Monday, BIC board President Stephen Boyd said reports last fall that the actual costs of the project were about $600,000 above the estimates were significantly understated.

"I can tell you that's it's significantly more than $600,000," Boyd said of the funding gap. "The gap depending on the scope of what the state wants to fund is between $3 and $5 million."

And it could be as high as $6 million, he said.

A technology/job training center, the BIC is considered key to the development of the 52-acre William Stanley Business Park of the Berkshires on the site of General Electric's former power transformers facility. PEDA is the quasi-public agency responsible for the park's development.

The BIC is a private public partnership between the city of Pittsfield and PEDA that is run by the Berkshire Innovation Center, an independent nonprofit organization.

Boyd, president of Boyd Technologies in Lee, said he recently met with state officials about ways to bridge the funding gap, and he hopes to have an answer within the next two weeks.

On Monday, he formally invited Gov. Charlie Baker and Secretary of Housing and Urban Development Jay Ash Jr. to tour the 52-acre William Stanley Business Park of the Berkshires, where the BIC will be located.

"The state has been very generous with General Electric in Boston moving their world headquarters to the seaport," Boyd said. "We hope that they will respond in kind here in the Berkshires as we try and redevelop that former GE site. We are hopeful."

If everything goes to plan, Boyd said it's possible the BIC's groundbreaking could take place this fall.

"At this point I'm not planning a physical opening of the center until 2017," Boyd told the board.

Programming associated with the BIC has already started, and is being conducted at other venues such as Berkshire Community College. The BIC also has a website, www.the-bic.org.

It was originally scheduled to open this October, with the groundbreaking expected to occur at the end of 2015.

After the $600,000 funding gap was reported last fall, BIC officials said in February that they hoped to break ground this spring, with the opening slated for January 2017.

The $600,000 gap represents the difference between the actual and estimated construction costs for the structure, according to the city's purchasing department. That gap developed when the low construction bid that was submitted to the city last September was $7.1 million, some $600,000 more than the $6.5 million that was estimated for the building's construction.

That $6.5 million was included in the $9.7 million grant that the city of Pittsfield received from the Massachusetts Life Sciences Center to build the BIC in 2014.

The BIC's board of directors pulled those bids off the table after they had been submitted last fall "because the funding gap was great enough that we couldn't build the center as we originally intended," Boyd said Monday.

The revised funding gap of up to $6 million includes a variety of other costs, Boyd said, including a "lot of add-ons" contained in the original bid documents. Not enough funding was included in the original documents to complete the BIC's clean room facility, according to Boyd.

"They had a lot of scaled back versions of the building that were not sufficient to move forward with," Boyd told The Eagle. "I'm not quite sure where the $600,000 came from, but if you go back and look at the documents it was always around $3 million."

Additional costs such as building the structure to permit more accelerator space that would allow the BIC's board to rent out space in the building, and having the clean room built with the efficiencies associated with a LEED certified building, "drive that gap to close to $3 to $6 million," Boyd said.

When asked what he hoped the state's "ideal response" to the BIC's funding request might be, Boyd said, "The ideal response is that they will answer the request to fund the program to its original intent.

"When the grant was originally awarded it was based on a feasibility study that was done three years ago," Boyd said.

Since that time, "construction costs and prevailing wages have skyrocketed and materials are up," he said.

"The work was thorough and good for purposes of the feasibility study, but once we got into the design schematics and understood the needs for the type of foundation we would have and all the other infrastructural needs for the building, it was apparent that $9.7 million wasn't enough to get it done.

The BIC's actual size "will be dependent on what the funding is," Boyd said. "We will need to do a redesign of the building no matter what."