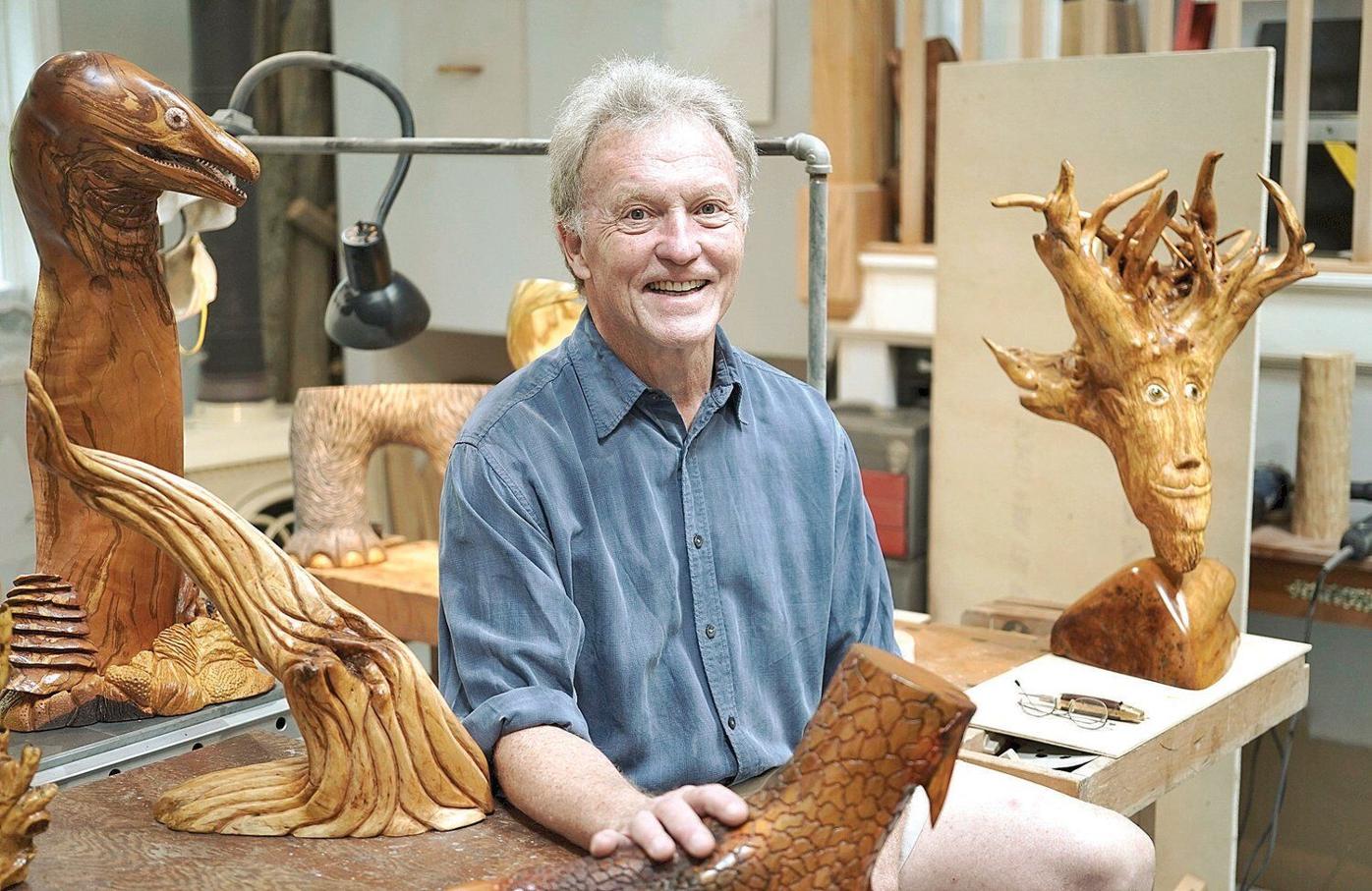 Sam Craig in his studio in Hinsdale, where he creates nature-inspired wood carvings. 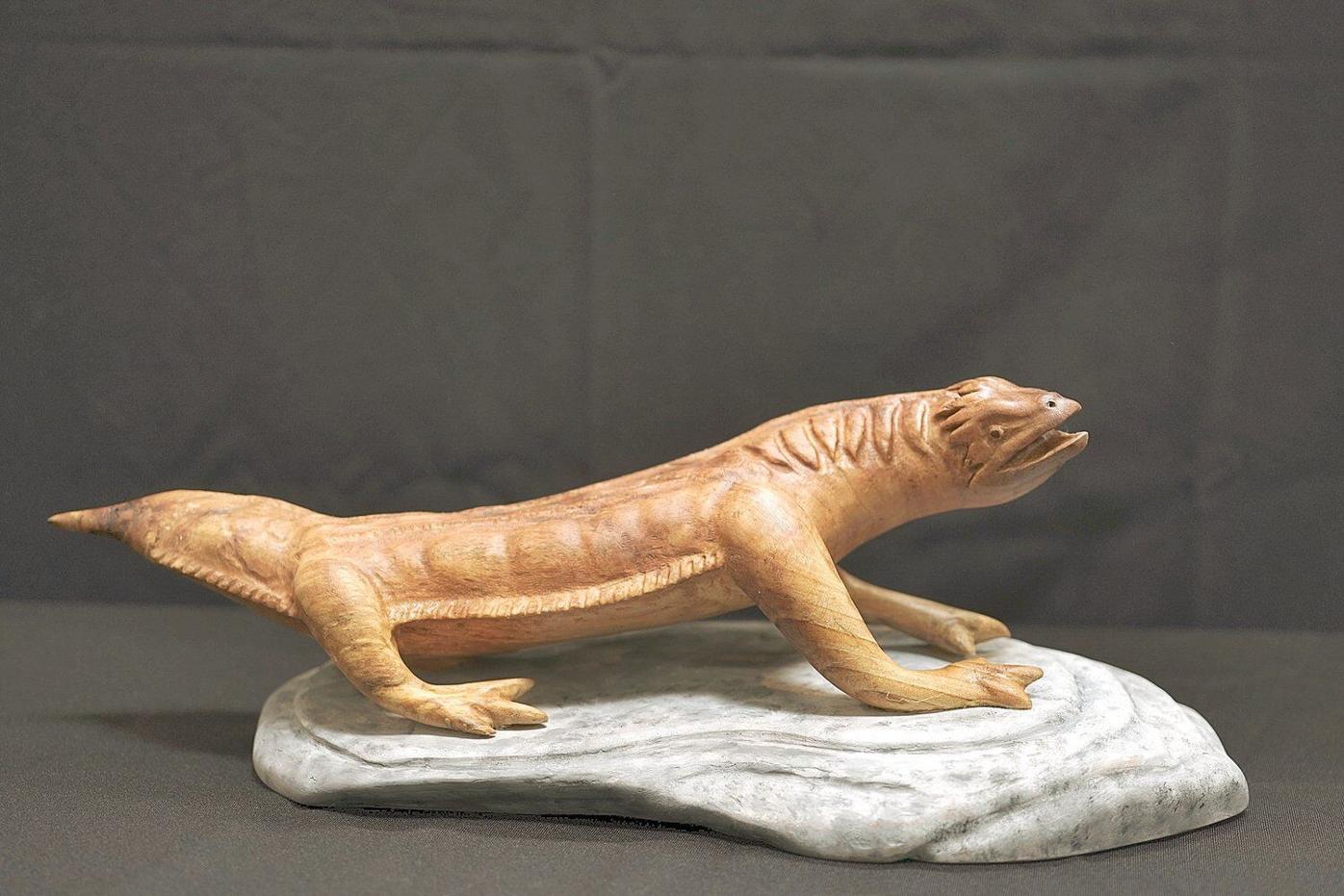 Craig carved this lizard-like creature derived from a recently discovered fossil dated to be 240 million years-old. 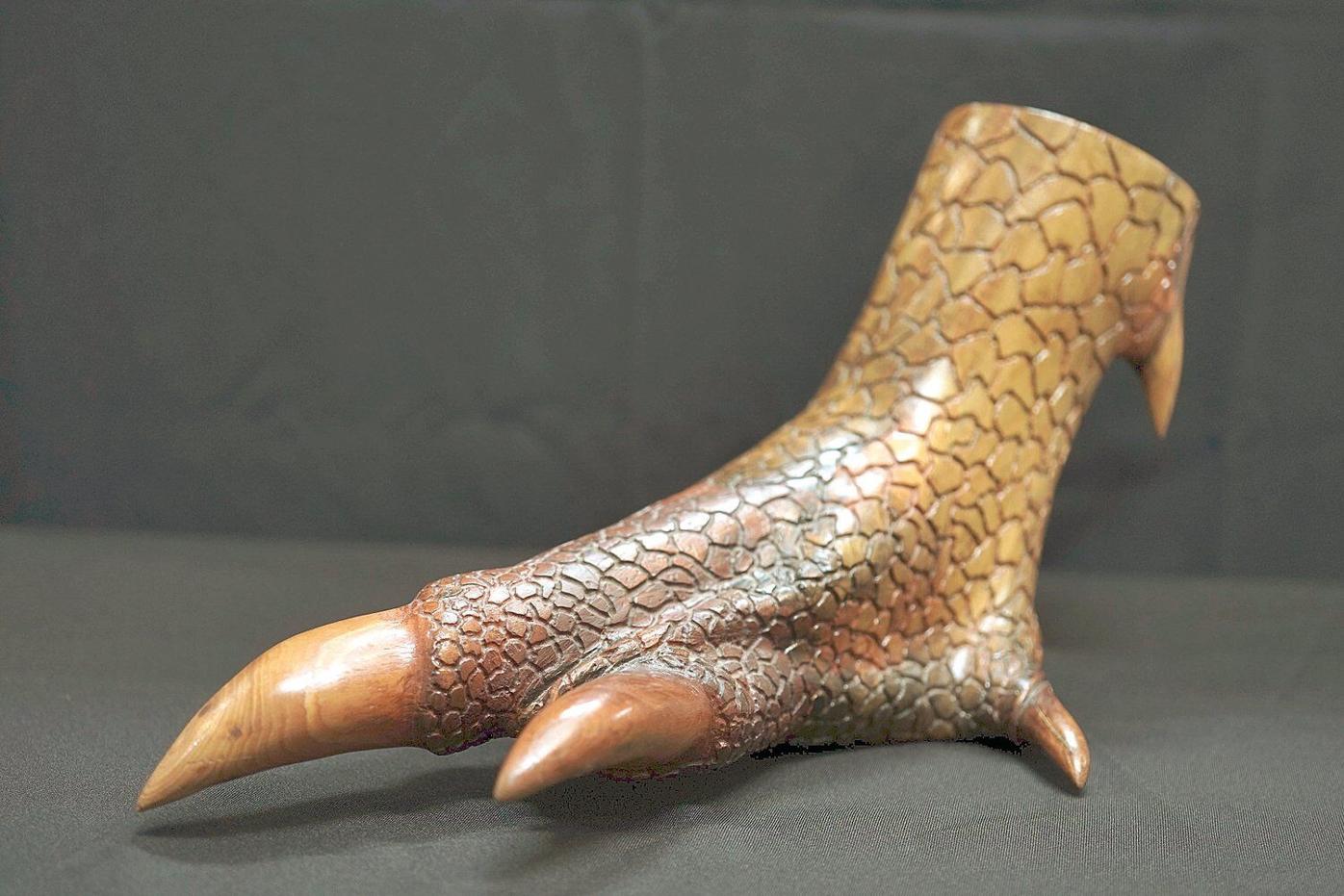 This piece called "Terror Claw" is one of Craig's earlier works.

Sam Craig in his studio in Hinsdale, where he creates nature-inspired wood carvings.

Craig carved this lizard-like creature derived from a recently discovered fossil dated to be 240 million years-old.

This piece called "Terror Claw" is one of Craig's earlier works.

HINSDALE — When Sam Craig began carving wood in his basement a handful of years ago, he initially focused on creating woodenware: spoons, bowls, spreaders, coasters, cutting boards, trays, back scratchers, candlesticks. But a less functional, more artistic type of woodcarving is filling his retirement schedule these days, work that draws heavily from nature but not necessarily from the rustic five acres that he shares with his wife, Kate Barton.

"It's a moray eel," Craig said Wednesday of one his favorite pieces, which was rising from a table inside his recently built Hinsdale studio.

Its leaning, toothy tower of finished cherry wood sat atop some bumpy cedar — coral, Craig said — and overlooked an antlered head, a scaly claw and an ancient lizard, among other carvings. For the past couple of years, the Berkshire Woodworkers Guild member and former scenic builder and designer has generated pieces that are often representative but also explore the abstract.

"I have not been encouraged to do that by some people who are kind of in the art scene," Craig said. "They say, 'You need to specialize.'"

For instance, his cherry burls could be their own genre, their gnarled bodies suggesting a variety of different forms. Craig's creative process doesn't fight deformities or other wooden obstacles; he lets them guide him.

"I don't take a big block of wood and then carve something out of it. I only did that once," he said.

He predominantly works in cherry and maple, much of which he finds on his property.

"While I'm cutting firewood, I'm looking for stuff," he said, "and you'll notice that a lot of my carvings look like they came from the length of a piece of firewood."

Friends also bring him pieces. Many of them line a wall in the studio attached to Craig's house. He built the structure a few years ago when his hobby began turning into something more time-intensive — and dusty — for the basement. His process involves roughing out excess wood, using an electric chainsaw, electric planer or various handheld Arbortech tools. One of them, he noted, helps him de-bark the wood. A band saw can help sometimes, he said, but intermittent cuts on certain pieces can be tricky for the machine.

"When you're taking out a lot of excess wood, and yet you can't cut through the legs, it's kind of hard to use a band saw for that," he said.

Finishing his forms requires a power carver, complete with a foot switch and bits, and sanding.

"I'm not a carver that's the old-fashioned, traditional way of using chisels and gauges and stuff like that," Craig said.

The Louisiana native's background is in the trades. Growing up, he learned carpentry and cabinetmaking, eventually graduating from Louisiana Tech University with a degree in mathematics. After college, he moved to Nashville, where he developed an appreciation for theater. He took an acting class taught by a community theater leader and, eventually, was designing and building sets for theaters around the Tennessee city.

"I realized you can spend a lifetime building scenery for professional theater because you use all kinds of materials, and you get to solve lots of problems. I just loved it," he said.

But it wasn't particularly lucrative, so he opened his own metal and woodworking shop, constructing museum, trade show and Christmas exhibits. Essentially, he applied theatrical building techniques to corporate work.

"In theater, you learn to build stuff that is very lightweight but very strong, and you learn painting techniques. The painters we had could turn a piece of plywood into marble," he said.

While he was in Nashville, he met Kate. She was from Tennessee, but working as an educator in the Berkshires. Their first date was just before 9/11, an event that actually enabled them to date long-distance.

"After 9/11, nobody was flying, so one of us [was] getting on a plane every three weeks for a long weekend to spend together, and it cost $100 to fly round-trip," Craig recalled.

That was the routine for months before Craig decided to uproot to Berkshire County, initially moving to Pittsfield before settling in Hinsdale. He soon became involved with local theater companies. In 2007, he joined Barrington Stage Company as a production manager before returning to freelance work, building specific pieces for the Pittsfield company's shows. For "Carousel," he carved all of the horses. For "The Crucible," he made all of the furniture. For "Lord of the Flies," he fashioned a wild pig. And for "To Kill a Mockingbird," he built a 25-foot tree.

He also contributed to other county theater companies, serving as WAM Theatre's technical director before retiring a couple of years ago. That was around the time that Craig attended the annual Berkshire Woodworkers Guild Fine Arts Show and Silent Auction at the Berkshire Botanical Garden. He presented some photos of his more artistic creations to a guild member, who encouraged him to join the association.

"That's when I started to get more serious about it," Craig said.

He has been selling his woodenware to Local in Lenox, and his creative carvings are available for purchase on his website. (They can be viewed by visiting samcraig.net.) They take him between 30 and 50 hours to complete. The head with antlers, "Oberon," not only nods to Craig's theatrical past but also to his wood-driven process.

"This was a stump that had a wonderful pattern of roots," he said.

"Terror Claw," one of his earliest works, is perhaps his only softwood piece.

"If you can imagine a log that had branches sticking out of it, I stared at it for the longest time and finally, I said, 'Well, if I cut this angle through the log, then each one of these branches kind of lines up for a claw,'" he recalled.

The only piece he carved out of a wooden block was the lizard. It was inspired by a picture of a fossil that dates back 240 million years. And then there are the coral works, filled with crevices, and his more abstract concepts. Their aim is to enhance natural beauty and, in the process, upend viewers' expectations.

"I like to carve stuff that you wouldn't expect to see made out of wood," he said.