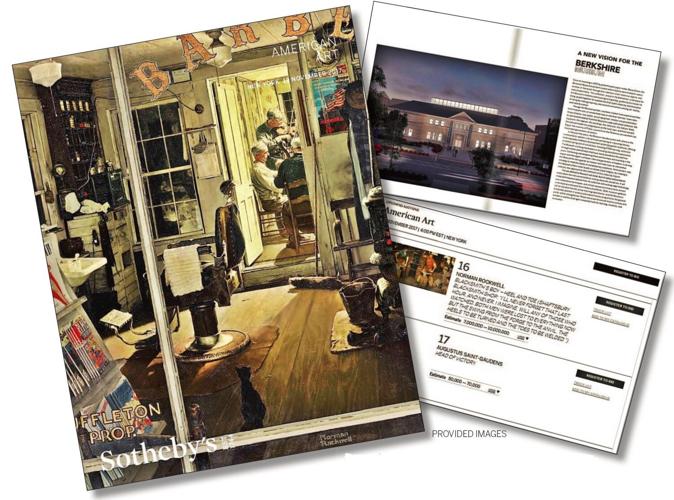 Images from the Sotheby's auction catalog for Nov. 13 go into the New Vision planned at the Berkshire Museum. Proceeds from the sale of a number of artworks from the museum will finance the New Vision. 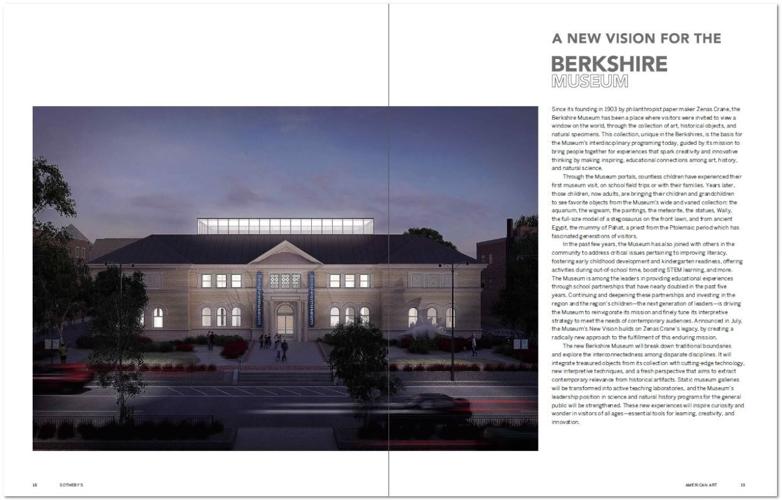 A spread in this screen shot from the Sotheby's auction catalog for Nov. 13 goes into the New Vision planned at the Berkshire Museum. Proceeds from the sale of a number of artworks from the museum will finance the New Vision.

Images from the Sotheby's auction catalog for Nov. 13 go into the New Vision planned at the Berkshire Museum. Proceeds from the sale of a number of artworks from the museum will finance the New Vision.

A spread in this screen shot from the Sotheby's auction catalog for Nov. 13 goes into the New Vision planned at the Berkshire Museum. Proceeds from the sale of a number of artworks from the museum will finance the New Vision.

PITTSFIELD — Seven works owned by the Berkshire Museum are now scheduled for sale Nov. 13, half the number originally proposed for the start of a controversial deaccession of art.

The museum is also scaling back, at least for now, the overall size of its sales.

Carol Bosco Baumann, a spokeswoman for the museum, said that only 19 of the original 40 works will be offered for sale in auctions stretching out into March.

"Plans for the balance of the deaccessioned works will be shared in due course by Sotheby's," she said in an email to The Eagle, in response to questions about the sales.

"We are moving forward and taking the steps necessary to implement the New Vision," she said, a reference to the museum's plan to emphasize science and natural history in new multimedia and interactive exhibits.

It could not be determined whether the museum plans to eventually go ahead with sale of the full list of 40 works announced in July.

In an online catalog published Friday, Sotheby's devotes 33 of 188 pages to the first sale of works linked to the museum's New Vision project.

The special section in the publication starts and ends with pictures and descriptions of two works by Norman Rockwell that together could bring bids of $40 million, according to Sotheby's.

Earlier listings showed that the Nov. 13 sale in New York City could include 14 works by American artists owned by the museum.

"The museum has decided to sequence the sale of the deaccessioned works differently," said Darrell Rocha, a Sotheby's spokesman.

The change means the museum has opted to delay auctions for a total of 11 pieces the week of Nov. 12.

The Nov. 13 auction is the first of four that week containing works owned by the Pittsfield museum. Its leaders plan to use proceeds to strengthen its endowment and to finance a renovation.

The museum will proceed with sales of four Impressionist and modern works Nov. 14 and Nov. 15, but has reduced the number of European pieces it planned to sell Nov. 21 from six to four.

That museum's New Vision plan is described in the Sotheby's catalog as a move "to reinvigorate its mission and finely tune its interpretive strategy to meet the needs of contemporary audiences."

"Announced in July, the Museum's New Vision builds on [founder] Zenas Crane's legacy, by creating a radically new approach to the fulfillment of this enduring mission," the catalog text says. "Static museum galleries will be transformed into active teaching laboratories, and the Museum's leadership position in science and natural history programs for the general public will be strengthened."

Opponents of the sale of artworks, including members of Rockwell's family, filed a motion Friday for a temporary restraining order to halt or delay planned auctions. Court papers claim the museum would violate Norman Rockwell's wish to see his painting "Shuffleton's Barbershop" remain in Pittsfield. The action also asks the Berkshire Superior Court to consider whether the museum's board is acting properly. A hearing date on the motion has not been set.

Both the museum and Sotheby's say they expect the auctions to take place.

"Sotheby's has reviewed the lawsuit ... and is confident that the claims are legally and factually flawed," the auction house said in statement Friday.

Separately, the state attorney general's office is reviewing the sales.

In addition to the Nov. 13 sale, the museum plans to offer six additional works to bidders at three other auctions that same week.

Though a Nov. 21 auction of European art had been expected to include six works from the museum, that number is now two, according to Sotheby's.

Of the 40 works the museum plans to sell, other pieces are now scheduled for auction with "master paintings" in February and in an "Asia week" sale in March.

Sale dates for four other pieces, including two sculptures by Alexander Calder, are listed on the Sotheby's website as "to be confirmed."

The Nov. 13 auction includes 84 pieces in all, according to the Sotheby's catalog.

Among them are other creations by Rockwell and works by Mary Cassat, Winslow Homer, Rockwell Kent, Georgia O'Keeffe, Grandma Moses, Maxfield Parrish, Joseph Stella, and both Andrew and N.C. Wyeth.

Of the five other pieces by Rockwell not owned by the museum, only one, "Christmas: Knight Looking in Stained Glass," comes with a bid estimate topping $1 million.

Expected bids are much higher for the artist's "Shuffleton's Barbershop" ($20 million to $30 million) and "Blacksmith's Boy — Heel and Toe" ($7 million to $10 million) — both owned by the museum.

Those figures represent the "hammer" prices. Sotheby's and the museum have declined to release details of auction terms.