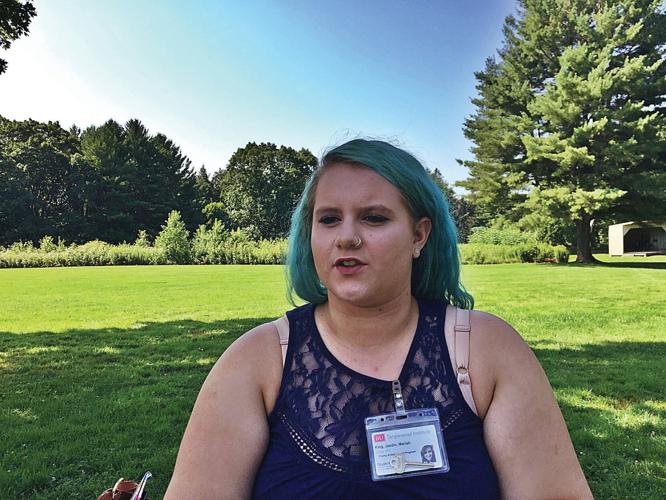 Jaedin King, 17, of Williamstown spent six weeks in the Vocal Arts program at Boston University Tanglewood Institute in Lenox. She is pursuing a career in music education with plans to attend BCC this fall. 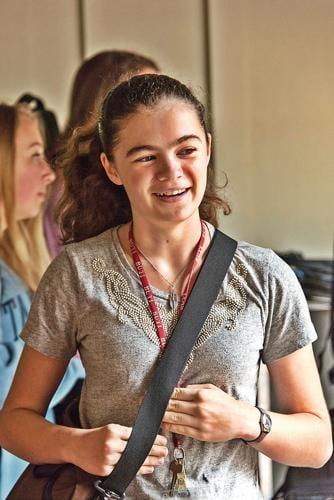 Clarinetist Alice McDonald, 14, of Great Barrington, spent six weeks at the Boston University Tanglewood Institute in Lenox this summer and says the experience deepened her commitment to a performing career.

Jaedin King, 17, of Williamstown spent six weeks in the Vocal Arts program at Boston University Tanglewood Institute in Lenox. She is pursuing a career in music education with plans to attend BCC this fall.

Clarinetist Alice McDonald, 14, of Great Barrington, spent six weeks at the Boston University Tanglewood Institute in Lenox this summer and says the experience deepened her commitment to a performing career.

LENOX — As the 51st season of the expanded Boston University Tanglewood Institute winds down, two Berkshire students are extolling the program for helping them settle on a career in music.

This summer, the program with students from 35 states and 11 nations, based at Groton Place on West Street, widened its offerings to include two, four or six week courses for ages 10 to 20. Previously, it had been limited to high school students. New courses, including an Electroacoustic Composition program and a Junior Strings Intensive for students 10 to 13, have taken root and will return next summer, said BUTI Executive Director Hilary Field Respass.

Having heard the BUTI Wind Ensemble and Young Artists Orchestra two summers ago, Alice McDonald, 14, of Great Barrington, recalled that "it was so impressive, I decided I'm going to do this somehow, no matter what."

"I love the fact that everybody here enjoys doing the same thing as me, we're working at such a high level," said McDonald. "Everyone practices and loves playing their instruments so much. If I could stay here all year, I would. I don't feel like leaving."

For Jaedin King, 17, of Williamstown, her six-week immersion in the Young Artists Vocal Program, partially funded by the Feigenbaum Foundation, turned out to be a life-changing experience, since her original plan had been to enlist in the military as an Air Force technician.

"But everyone had said, `you have a beautiful voice, I'd hate to see it go to waste, there's not a lot of chance for you to sing in the military,'" King pointed out during an on-campus conversation.

"Before I came here, I didn't know a lot about music, I had been self-taught all my life," the 2017 graduate of Mount Greylock Regional High explained. Despite feeling "behind the game" when she arrived on campus in early July, King said the knowledge she has gained "made me feel like I've caught up, I'm where I need to be."

At Mount Greylock, she performed in musicals starting in middle school and joined choirs, but shifted her priorities to athletics. A year ago, King started private lessons with jazz and cabaret singer Sherri James Buxton, the outreach coordinator at the Berkshire Music School in Pittsfield. The music school's executive director, Tracy Wilson, recommended King for admission to the BUTI program, Respass said.

King had been unfamiliar with the BU institute previously, but upon learning about it, "I thought OK, this seems nice, really cool, I wanted to step outside my comfort zone and try something new since I'm not normally a classical singer," she said. "When I auditioned, I didn't think I had a chance, but when I got in, I thought it was thrilling and quite wonderful."

"We learned together in a classroom setting — voice, ear training, theory — and that's what really helps us sing together, to balance with each other and have just a big circle of beautiful music," King added, praising the faculty as "great role models." As a member of the Young Artists Chorus, she was on stage at the Koussevitzky Music Shed during a late-afternoon concert at Tanglewood on Parade last Tuesday.

Still to come: Solo recitals on Monday (Aug. 7) at Trinity Church; and Opera Scenes at 6:30 p.m. on Aug. 11 and 12 at BUTI's West Street campus theater, a first-time experience for King. She has also led on-campus cafe musicales for the BUTI students.

"I like to embrace the beauty that's in all music, so I tried to get as many of my friends involved as possible," King said. "I love expanding my love of music to anybody I can." Besides singing, she plays the guitar, piano, violin, clarinet, ukulele and drums.

She will study at Berkshire Community College starting this fall, aiming for a music degree to fulfill her goal of teaching, along with some performing.

McDonald, who started on the cello "but hardly ever practiced, didn't really enjoy it," decided to switch to a wind instrument when she was 10. "From the very first day, I really loved the clarinet, wanted to practice and didn't want to put it down. Now, I love practicing," she declared.

A native of Australia before her family moved to the Berkshires, she attended the Rudolf Steiner School in Great Barrington before switching to Monument Valley Middle School for 8th grade. This fall, she will be a freshman at Monument Mountain Regional High.

McDonald played in school bands and started taking lessons with Michael Gillespie, the band director at Monument, four years ago. Now, she studies with Curt Blood, principal clarinetist of the Hartford Symphony and a former Tanglewood Music Center Fellow, and has also picked up the flute.

After two weeks in BUTI's Clarinet Workshop and a month in the Young Artists Wind Ensemble, McDonald is sold on performing music as a career, having attended nearly all the BSO and TMC orchestral performances at Tanglewood. She's eager to spend another summer at the institute, audition-permitting, and eventually apply to a music conservatory.

Looking ahead, she hopes to broaden her horizons — "opening my mind to the different types of music out there and obviously the technique, being open to all the possibilities that are out there for me."

"The Young Artists Orchestra, Wind Ensemble, Composition, Vocal and Harp are flagship programs that people all across the country and the world aspire to, and we're so glad students from the Berkshires can also take advantage because it's a way to stay close to home and have the world of music open up to you," said Respass, the executive director. "There's not one profile of someone, except for the talent and the hard-work ethic."

Details about the 2018 Boston University Tanglewood Institute session, including audition requirements and program information, will be available online early this fall at bu.edu/tanglewood, by e-mail at tanglewd@bu.edu, or by phone at 617-353-3386 (after the summer). Application forms, including merit and financial aid scholarship options, are posted in early October with a late January or early February deadline.