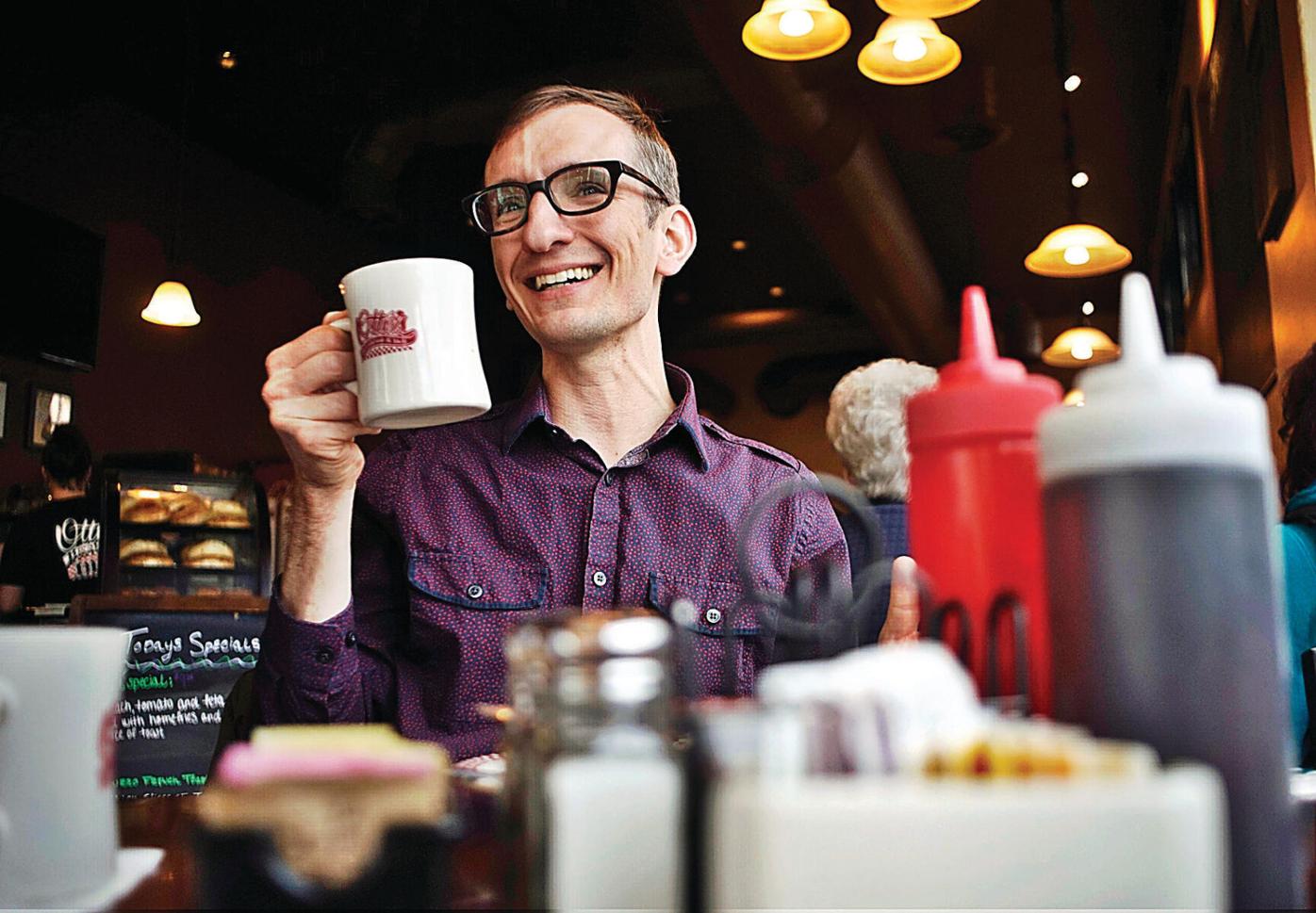 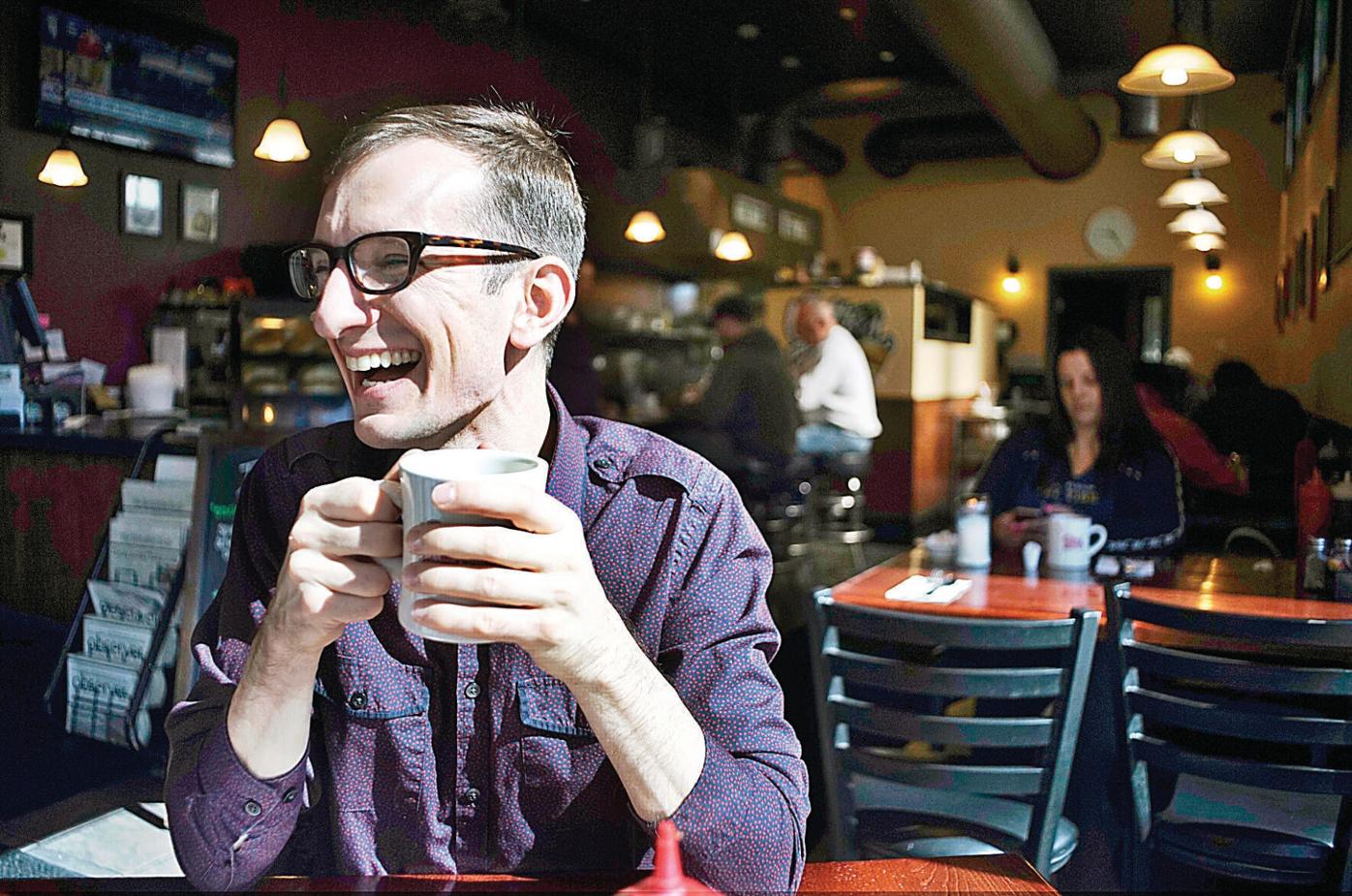 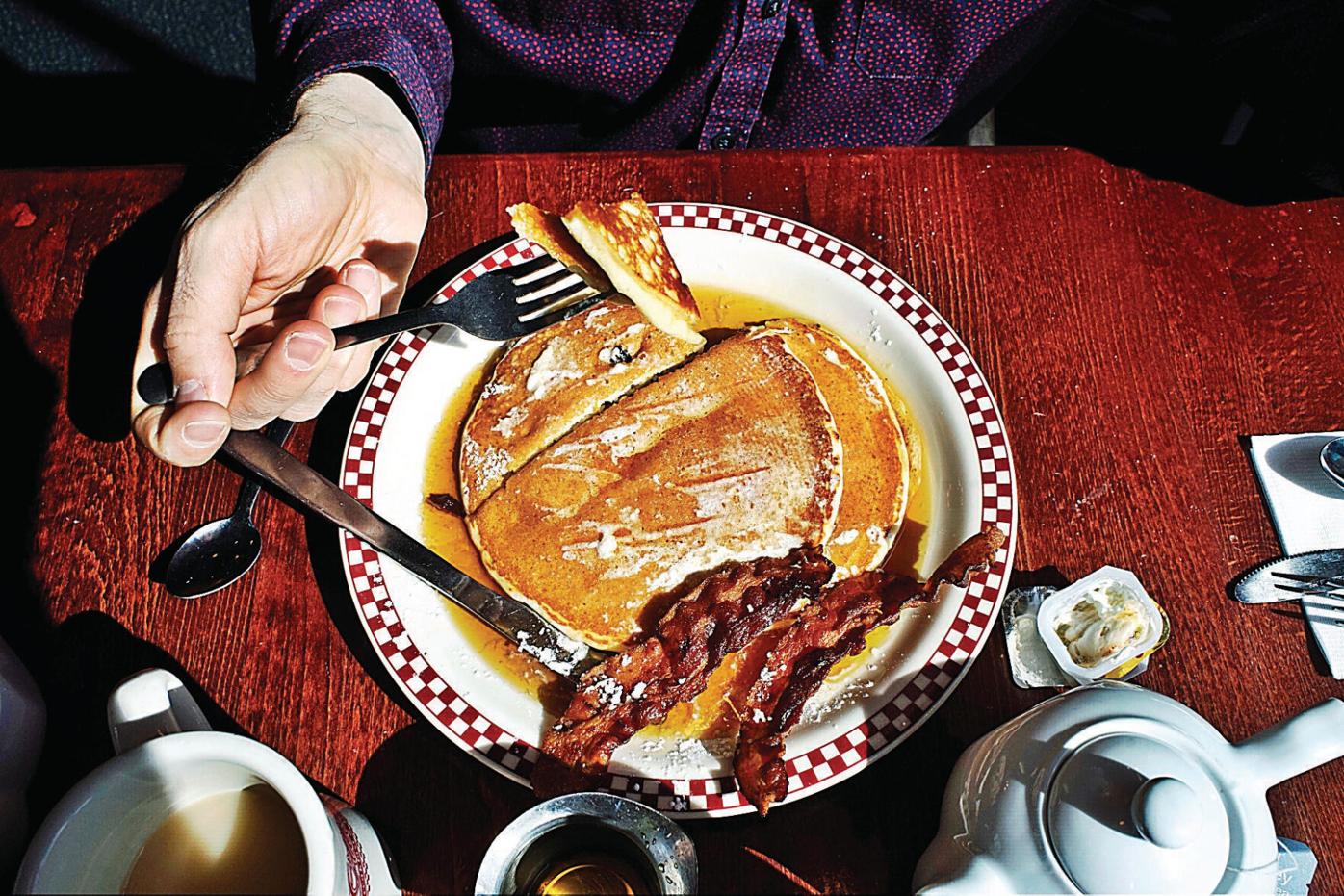 PITTSFIELD — How to get off on the wrong foot with Alex Reczkowski: Haul out a library cliche. Worse, apply it to the Berkshire Athenaeum, where he recently completed his first year as director.

The pancake batter hadn't hit the grill. I was headed to the doghouse.

He'd just told me, as we studied menus, that food's not that important to him.

"It's another decision to make in the day," Reczkowski said, tucked into a table at Otto's Breakfast and Deli off Park Square. Picture windows let him keep an eye on his library this Thursday morning.

"I feel like everybody's loving food and caring so much about it. It's fine for them, I just don't want to put so much energy into it," he said. "And then we get these obsessions — `Oh, I can't eat this, I have to eat that.' Maybe it's too much thinking for me."

This from a guy who works surrounded by a quarter million books.

What's his psychic food? I asked, changing gears. What fuels his creativity?

"Then the library is the perfect environment," I said, wrong foot poised.

"Oh, the library is not silent, my friend."

"What about all those shushing librarians?" I asked.

Not at his, anyway.

Winter before last, Reczkowski, who is 36, was working as director of technical services at the library, a dry title that gets him all wrong. Then trustees tapped him for a three-year contract to succeed Ronald Latham, the Athenaeum's director since 1992.

A year in, Reczkowski is nudging the Athenaeum in new directions, questioning assumptions about a place he believes exists to foster small-D democracy, a purveyor not just of beach reads but solutions big and small.

I still had a few assumptions that needed skewering.

Wasn't the internet going to kill the library?

Reczkowski is warm and mild-mannered. He seems even more so when poised to score a debate point.

"Do you have high-speed internet at home, Larry?" he asked, guessing right; I don't. "Hmmm."

Let it be noted that Reczkowski has spent enough time working in community theater to know how to get the most out of even a non-word like that.

"Guess who has high-speed internet?" A beat. "The library."

His pancakes come. And they sit.

"Have you been in the library?" he asked. "Have you seen the thousand people who are there every day? The two books every three minutes that are checked out from the desk? The computers that are filled with people?"

(Yes, no, no, yes. But these were, apparently, rhetorical questions. Even the real maple syrup I insisted Reczkowski try couldn't distract him from making a meal of preconceptions.)

From computers he moved to printers, the 3-D type. The library has three of them. Patrons are coached on their use.

"Folks are coming in. It's great. It really connects to one of our goals at the library, which is to move from consumption," he said. "We're seeing more about creation. People are coming and making their family trees. Using our 80,000 rolls of microfilm to do family research. Creating connections with other folks.

"One of our goals is creating a space for everyone to come and have community dialogue. Be engaged in the community. Be engaged in civil discourse. And that's happening. We're so packed. Everyone wants to be in our meeting rooms and our auditorium and our conference room."

In another tweak, the library that won't "shush" people doesn't stop them from bringing in food, either.

In the magazine area, also known as the "food zone," furniture was shifted recently for an event, to create space for an audience.

I asked if it was really OK to bring food these days. Reczkowski — the food agnostic — laughed and described the methods people once used just to sneak in coffee. He may not think much about what's on his menu, but he's against snack prohibition at the library. "People don't want to hear that."

Reczkowski's involvement with the arts — as stage manager with Shakespeare in the Park and on the city's Artscape Committee — is spilling over. He's determined to bring performances inside the library. An artist associated with Jacob's Pillow Dance will perform July 19.

All of this sounds, I suggested, like a radical shift for the institution.

Reczkowski pauses, chewing over a nuance.

An example comes to mind. "For years, we had spinning racks of paperbacks in the center of the main floor. And I said, `What's the prime real estate in this room, in this library?' And that's it. That's our main floor, center of the room, this big open space and we have paperbacks sitting there. Nothing wrong with paperbacks. People love them. They make great beach reads or lake reads."

Libraries continue to cull books from their collections. Volumes that don't circulate are weeded out. That's done everywhere. Under Reczkowski's watch, the Athenaeum is also reconsidering the value of its traditional reference section, given how easy it is to search on the web.

"People don't come to the library for the World Book Encyclopedia as much any more or the Oxford English Dictionary," he said. "We're shifting away from such a large reference collection and we're changing the face of that space. So we'll be weeding books that people aren't using in the same way. And that's healthy."

I agree that it is. I ask whether he tries to weed his own ideas or beliefs. How does he go about updating them?

"This may be more `meta' than you're looking for, but I do believe we've framed so many of our questions or challenges in our lives politically. That we feel like every challenge we're facing has to have some political answer or solution," he said. "And that reminds me that how, and I'm sure you've heard this, if you have a hammer everything looks like a nail.

"Not everything has to have this highly politicized solution. Maybe it is about reading together and understanding each other that way. I guess that's political. But in terms of politics solving it and the pressure we put on politics to solve things for us. That's something I'd like to change."

"I'd rather look for questions than problems," he added. "I'd rather dream about the growth that we want to have. Rather than focus on the problem. It's a little lofty, I guess."

The pancake stack is depleted, but could still serve as a paperweight coming out of a 3-D printer. He smiles when the server asks if he'd like her to clear. "I'm still eating. I'm a growing boy."

Speaking of boys, I wanted to know when and how he got the library bug.

He turns the question back to me, asking when I knew I'd work in journalism. College, I said. He's not buying it. "It came from somewhere and didn't start in college, I'd bet. How do we trace it back?"

I ask about his childhood library. It was in Ringtown, Penn., on shelves that never closed.

"My childhood library was behind the rocking chair in the living room. It was a little bookshelf and was filled, on the bottom shelf, with children's books." The collection contained his mother's and uncle's books, plus his own, and his sister's.

Reczkowski didn't just read those books, he managed the collection. After pestering his grandmother for weeks, she bought him an adjustable date stamp and ink pad.

"I put date due slips in all of the books. That was my first library."

Even so, it might not explain the why of this career.

He graduated to the Ringtown Area Library, where one of his childhood babysitters now works. As an older child, he recalls the thrill of checking out Stephen King's books.

Today, he's just listened to the audio version of Krista Tippett's "Speaking of Faith" for a book group associated with the Pittsfield Area Council of Congregations. The book he can't bear to finish? "The Goldfinch" by Donna Tartt.

"I just can't bear to get to the end of that book. I just don't want to finish it. I guess I'm keeping a cookie in the cookie jar."

I ask what gets him jazzed at work.

"I don't know. Every day is so good," he said, then paused in thought, somehow finding stillness in the commotion around him at Otto's.

"We have a lot of potential of seeing people care about each other at the library. And caring about their community," he said.

He ticks off examples — people who come for a yoga class. People who help organize school field trips.

They all come to a place, he points out, where city employees (45 in all, 14 of them full time) are paid to answer the public's questions.

Then he remembers something from his childhood.