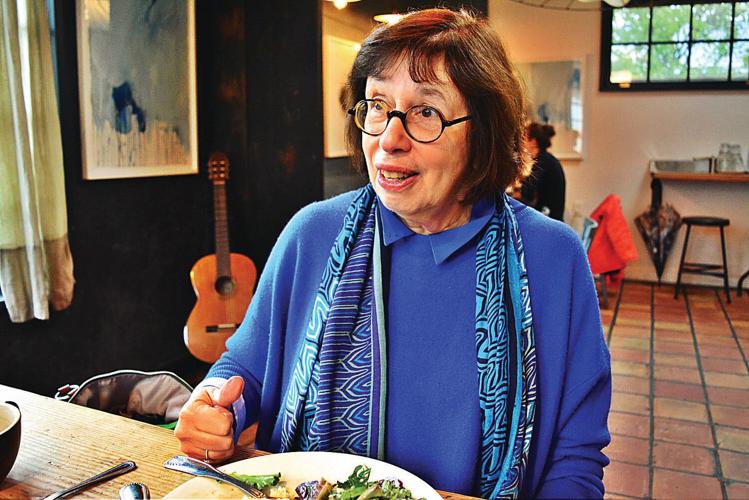 Journalist Linda Greenhouse sits down for breakfast at the No. Six Depot in West Stockbridge. Greenhouse had a black coffee and a breakfast burrito with eggs, queso fresco, mixed greens and pico de gallo. Sunday, October 29, 2017. 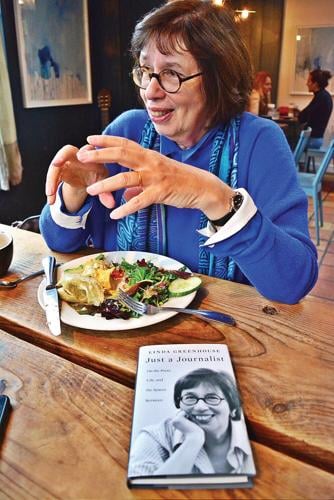 Journalist Linda Greenhouse sits down for breakfast at the No. Six Depot in West Stockbridge. Greenhouse had a black coffee and a breakfast burrito with eggs, queso fresco, mixed greens and pico de gallo. Her new book is "Just a Journalist,?? Sunday, October 29, 2017. 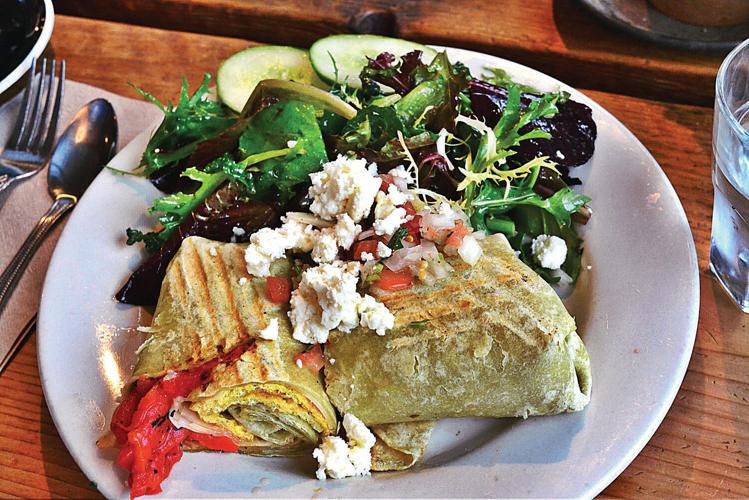 During a breakfast at the No. Six Depot in West Stockbridge. Linda Greenhouse had a breakfast burrito with eggs, queso fresco, mixed greens and pico de gallo. Sunday, October 29, 2017.

Journalist Linda Greenhouse sits down for breakfast at the No. Six Depot in West Stockbridge. Greenhouse had a black coffee and a breakfast burrito with eggs, queso fresco, mixed greens and pico de gallo. Sunday, October 29, 2017.

Journalist Linda Greenhouse sits down for breakfast at the No. Six Depot in West Stockbridge. Greenhouse had a black coffee and a breakfast burrito with eggs, queso fresco, mixed greens and pico de gallo. Her new book is "Just a Journalist,?? Sunday, October 29, 2017.

During a breakfast at the No. Six Depot in West Stockbridge. Linda Greenhouse had a breakfast burrito with eggs, queso fresco, mixed greens and pico de gallo. Sunday, October 29, 2017.

WEST STOCKBRIDGE — Former New York Times reporter Linda Greenhouse covered the U.S. Supreme Court for 27 sessions. But when reflecting on her career, the part-time Stockbridge resident is quick to point to an assignment in Albany, N.Y.

"Covering the state Legislature is about the most fun in the world for a young journalist," said Greenhouse over breakfast at No. Six Depot Cafe, just a short drive from her Stockbridge home, on a recent Sunday morning. "You learn a lot; it's action, it's colorful characters, it's stuff of public significance. ... In some ways, it's the most vivid part of my career."

It's a career that included having a front-row seat to the highest court in the country — her Supreme Court beat spanning from 1978 to 2008 — and witnessing changes not only in the court system but also in the practice of journalism. In her newest book, "Just a Journalist: On the Press, Life, and the Spaces Between" (Harvard University Press; $22.95), Greenhouse examines those shifts.

"I could've talked about the court, the history of the court or some analysis, but I decided it was an opportunity to be more personal and talk about journalism today through a very personal lens that became a rather autobiographical lens," she said.

And it's a lens not without some cloudiness.

The Pulitzer Prize winner has had her journalistic reputation on trial a few times. In 1989, she marched on the National Mall in support of reproductive rights. She defends her action in the book, writing, "It was an early experience of accidental activism."

In the book, she also discusses the 2006 speech she gave to alumnae at Radcliffe College, her alma mater, denouncing President George W. Bush's administration for "creating law-free zones at Guantanamo Bay, Abu Ghraib, Haditha, and other places around the world."

But for those wondering if her opinions have seeped into her work, Greenhouse is blunt.

"Read my stories," she said.

"Greenhouse is indeed an activist," he writes. "There just doesn't seem to be much accidental about it." When asked about Lozada's review, Greenhouse pointed to a blog written by Erik Wemple, a media opinion writer for The Washington Post, who also wrote about the book.

"It totally proves all my points," Greenhouse said.

Wemple includes some quotations from former Times executive editor Bill Keller, who was unaware that Greenhouse was donating to Planned Parenthood during her tenure and would have liked to discuss that with her. But the writer also offers the best defense of Greenhouse's work during her stint as a Supreme Court reporter, which ended in 2008 after she accepted a buyout at the paper: "The stories are detailed, accurate and explained in plain English," Wemple writes.

Greenhouse has the hardware to support this description. In 1998, she won the Pulitzer Prize in beat reporting for "her consistently illuminating coverage of the United States Supreme Court."

Like those women, Greenhouse has had a rare grasp on and position in history.

In Greenhouse's 2016 book, "The Burger Court and the Rise of the Judicial Right," the author chronicles the changes in the Supreme Court into the mid-1980s. When asked to identify some of the major changes in the court during her time covering it, she responded, "Of course, women coming onto the court. I think it's hard for people today — certainly younger people today — to realize the social impact of Sandra Day O'Connor coming to the court. It was really a big deal. Of course, now there's three women, and people don't think about it anymore."

Press coverage of the court is also different. She points out the press corps is "a lot smaller" than it was in her time. And in a world of immediate news and social media, she said she had to ask herself, "What value am I adding if anybody who really cares about the Court can read the opinion within minutes of its being issued on the Court's own website? If they're curious, they can read the briefs. They can read the argument transcript."

She decided that providing context about where the cases came from, why there were there and their decisions' implications was her new objective.

"Empower [readers] through information," she said.

Today, she's sharing her wisdom with students at Yale Law School as the Joseph Goldstein Lecturer in Law (her primary residence is in New Haven, Conn.). She also pens op-eds for The New York Times.

And when she's not in the classroom or writing, Greenhouse is regularly attending local film and theater events, recently taking in a performance of "Gaslight" at Barrington Stage.

After graduating from Radcliffe and quickly finding a position at the Times in New York City, Greenhouse eventually asked for a job in the Albany bureau during the mid-1970s.

"No woman had ever been assigned to Albany," she writes in the third chapter of her book. "But I had observed the central role that time there seemed to play in the career paths of the male reporters around me."

She joined a four-person department reporting on the state government. On the weekends, she would check out the Berkshires arts scene. It wasn't new to her; as a child growing up in Connecticut, she attended a summer camp in Massachusetts that brought her to Berkshire institutions such as Tanglewood and Jacob's Pillow.

Greenhouse also enjoys the Berkshires food scene, noting her affinity for West Stockbridge's offerings in particular. At No. Six Depot Cafe, she enjoyed a breakfast burrito with eggs, queso, mixed greens and pico de gallo, washing it down with some black coffee. Her typical breakfast includes a hard-boiled egg and cottage cheese, she said.

"I've never not eaten breakfast," she said. "I love breakfast."

She is less enthusiastic about norms in journalism, a topic she tackles in her book's second chapter.

"The great fear of journalism today is being called biased," she said. "Bias is a horrible word to fling at an individual journalist or at a news organization."

She cites the various distancing mechanisms journalists use today, including false equivalencies and lazy sourcing that reduce or expand stories to two sides.

Greenhouse's commentary has generated a buzz among news media professionals. But she isn't trying to win a popularity contest.

"I don't expect the journalism establishment to be thrilled with the book," she said.