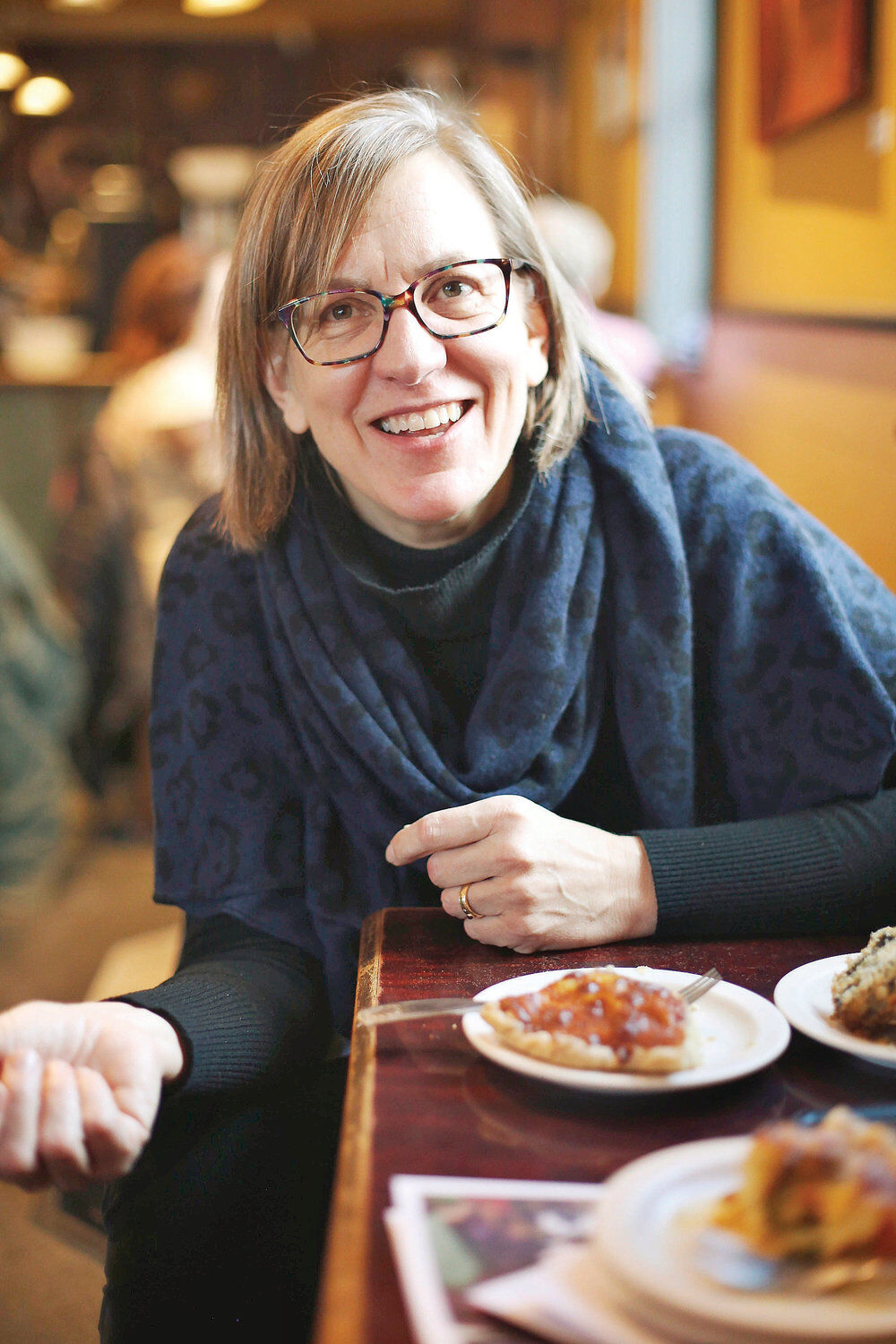 Pamela Franks took over the helm at the Williams College Museum of Art as the new director in September. Since then, she's been familiarizing herself with her colleagues, the community and students. 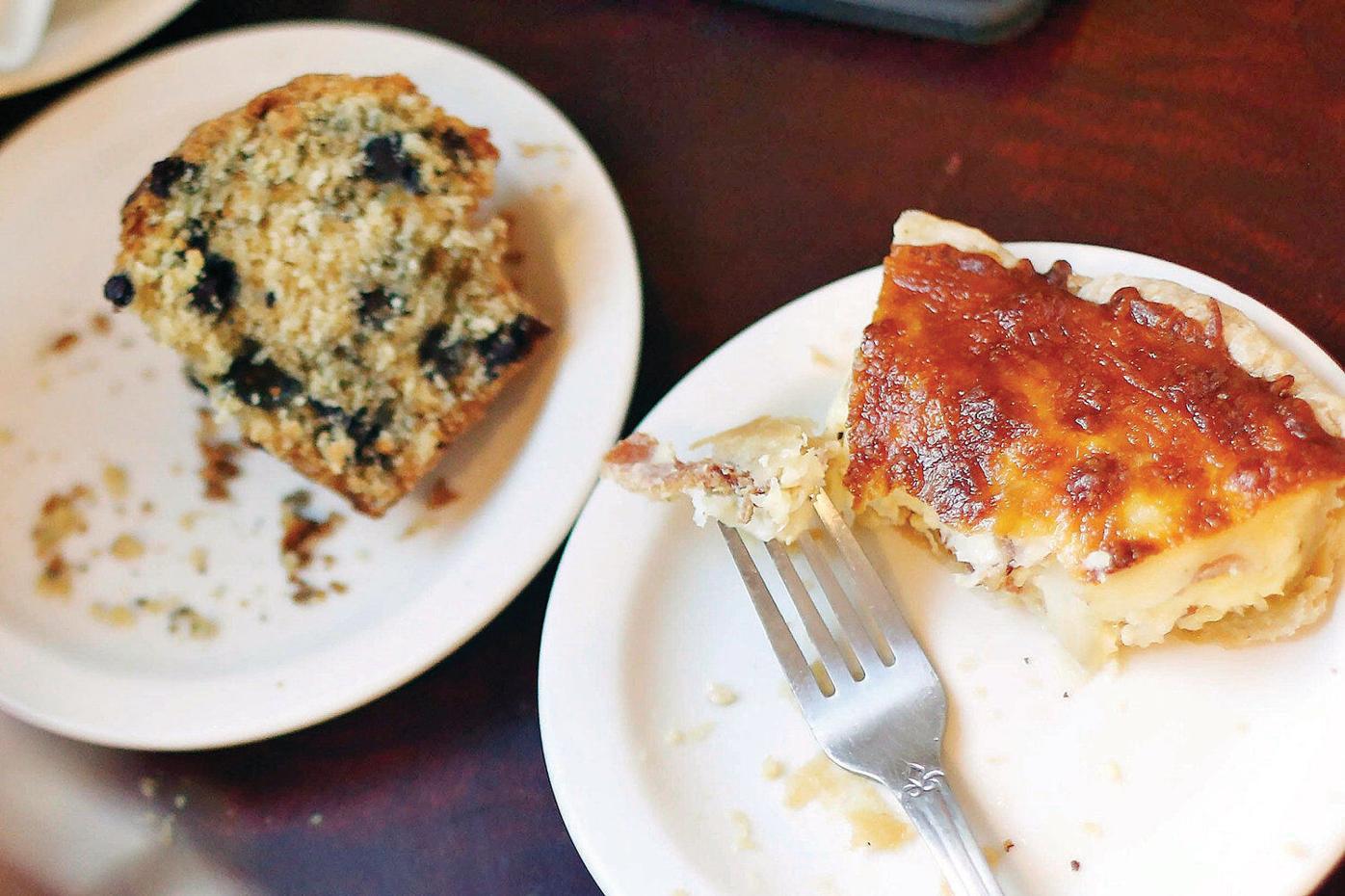 Franks ordered a mushroom and onion quiche and half of a blueberry muffin for breakfast at Tunnel City Coffee in Williamstown.

Pamela Franks took over the helm at the Williams College Museum of Art as the new director in September. Since then, she's been familiarizing herself with her colleagues, the community and students.

Franks ordered a mushroom and onion quiche and half of a blueberry muffin for breakfast at Tunnel City Coffee in Williamstown.

WILLIAMSTOWN — Watching Pamela Franks walk into Tunnel City Coffee, one may be surprised to know she's only been in town since the middle of September, when she became the new director of the Williams College Museum of Art.

Frank waves to several patrons she knows as she approaches the glass display case, where she makes dinner plans for later in the week with a woman on the other side of the counter, before taking a serious look at her breakfast choices.

"The quiche looks delicious," she says, pointing to several choices on the lower level. She orders a slice with mushrooms and onions, a blueberry muffin (to share) with two plates and a 20-ounce medium roast coffee in a paper cup that she can take back to the office later.

"I love the coffee here," she says, as she leans in close so she can be heard over the coffeehouse cacophony. "Before I even moved here, a friend sent me a bag of coffee beans from here. So, I was looking forward to coming here."

She's no stranger to the area, having been part of a Yale University Art Gallery contingent — headed by Director Jock Reynolds — that collaborated with the Massachusetts Museum of Contemporary Art and WCMA to create the exhibition, "Sol LeWitt: A Wall Drawing Retrospective" at Mass MoCA.

"It was kind of an unbelievable project. It changed what we imagined possible for exhibitions," Franks said. "It was such a vivid experience. The whole building was transforming. It was a great lesson for me, because my director at the time, Jock Reynolds, was the key partner for the Yale University Art Gallery. He worked hand-in-hand with Joe Thompson at Mass MoCA and WCMA was right in there with them. It was a great partnership. In addition to being a deep partnership with an artist, it was a collaboration across institutions, which was a really great learning experience for me to see how that could work."

The familiarity is a small pleasure for Franks, who spends the week in Williamstown and most weekends in New Haven, Conn., which her husband and 16-year-old son still call home.

"My son is in 10th grade. He just started a new school, which he is really excited about. That plan was in place before we knew there was a possibility of me coming here, so we want to make it possible for him to stay at a school that is great for him," she said, mentioning the family keeps in touch during the week via Face Time, a video calling phone app. "So, that means I'm doing a little more driving than I'm used to. I go back and forth on the weekends and they've come up a few times. They love it here. We're really enjoying our weekends together, because we miss each other during the week."

Although she's separated from her family during the week, the opportunities that WCMA offered appealed to her desire to return to her passions: engaging students and working with artists.

"I love teaching museums. I love engaging with students. I really love working with artists. There's not too many places where I could imagine making the change for, but Williams was certainly 'the one' that I could absolutely imagine it," she said. "It's a great museum with an incredible history and an incredible future. It's such an important leader for the field of museums and the way students are engaged is something all of us in the museum world look to. The art department is fantastic; the grad art program is such an important program for the museum world and for art history. So the opportunity to collaborate with the art department and the grad art program is really appealing."

Franks spent the last 14 years of her career at the Yale University Art Gallery, where she last served as senior deputy director and the Seymour H. Knox, Jr. curator of modern and contemporary art. But, she said, she didn't originally have plans to work in the art world. As an undergraduate, she was on track to major in math or a science, specifically chemistry or physics.

"Those were my strengths at that point. I worked in science labs all through high school for my jobs," she said. "But I was always an avid reader. By the time I was a sophomore, I realized ,with good counsel of my mentors, that I could be an English major. It wasn't that I didn't love science and math, because I did, but I was who I was because of reading."

It was as an English major that Franks took her first art history class and became enamored with the field.

"I was just completely wowed by the way the study was anchored in specific works of art and you could bring all these specific intellectual reference points to bear on that one specific piece of art," she said. "That professor sent us to a local museum to do a paper, a formal analysis on a work of art. That was transformative for me. It's still very present in everything I do."

That experience eventually led to a Ph.D in art history from the University of Texas at Austin, which helped develop her love for the curatorial process and working with artists.

"I did my PHD in Texas, but I moved to New York City to write my dissertation on contemporary art. Specifically, I was writing about the artist Adrian Piper and there were a number of collections and archives I needed to work with in New York," she said. "When I moved there, I quickly fell in love with the city. I decided to try to stay. I ended up working for another artist, Joel Shapiro, one day a week and then started working on an exhibition at the Guggenheim, while writing my dissertation."

After graduation, she spent two years as a postdoctoral curatorial fellow at YUAG. She then returned to Texas, where in Dallas, she became part of a small team that helped open the Nasher Sculpture Center.

From there, she joined the Yale gallery staff as its first curator of academic affairs in 2004. She held several other positions over the years, before being named acting director in 2016. From there, she became the senior deputy director, chairing the gallery's senior management team.

But then the opportunity to join WCMA came about and brought with it the ability to work in an "ecosystem of museums," including Mass MoCA, the Sterling and Francine Clark Art Institute and the Bennington Museum.

"That really appealed to me," Franks said. "I love collaborating across institutions. There also are so many artists moving into the area. My passion for working with artists was peaked. But mainly, it's the opportunity to work with the college; to work closely with students and to be at a museum that is a real hub of creativity, inquiry and connections to art across all different disciplines and subject areas that interested me. It's sort of like all the pieces lined up."

For the last three months, she said she spent a lot of time getting to know her new colleagues, at the college and at local museums, meeting alumni and donors, and listening to others.

"I think the future is really a matter of planning for what the art museum can be on a liberal arts campus in an arts-rich area for generations to come and laying the groundwork for that, over the next several years, while engaging all our constituents — students, faculty, colleagues from the field, all the art audiences from the area and people who are here at different times of year — in that process of envisioning what museums will be moving forward," she said. "We know how they contribute in a meaningful way to people's lives; how the kinds of experiences people have with art — the kinds of learning that happens in a museum setting with art and with other people, thinking about art and talking about art — is a really special thing."